Our main aim for the trip was to get the four 1 point hills around The Cheviot activated and sneak in either two other 1 point SS summits or possibly Peel Fell (G/SB-004) since the latter was not too far from the campsite in Bellingham. On the first day we managed to activate the two furthest summits but if we were going to do anything more than the minimum, the second day had to include both Tosson Hill (G/SB-007) and Long Crag (G/SB-008), the two hills either side of Rothbury.

We currently both have jobs that are very time hungry with a fair amount of responsibility so we desperately needed some down-time to de-stress a little and take things a little easily for a short while. Even though plans regarding travel, our camping, summits, suitable parking, the walks, equipment and potential issues had all been taken into account nothing was really set-in-stone so we only alerted for the first hill on the day once we committed to do it. When and which summits were done wasn’t really decided on till the morning of the activation and that was totally dependent on how we felt, the weather forecast and if anything else took our fancy. Our week trip wasn’t ever intended on being solely SOTA.

On the Tuesday we awoke to beautiful sunshine and a clear sky but we were enjoying a lazy slow morning and relaxing over an unhurried breakfast of bacon, egg and haggis baps. By 11am we set off on a leisurely drive towards Rothbury and then along Coquetdale to the parking and picnic area in the Forestry Commission site for Simonside Hills knowing it would be a long walk (almost 5km to the summit and over 200m of ascent) and thinking we would see how it went for a second activation.

Initially we followed the red route anticlockwise from the carpark up to the main track below Simonside, this being the usual target of most people walking the area. Here we did not go up Simonside but followed the track west along the recently felled trees up to a gate that led onto the heather-covered moorland that forms the mile-long featureless ridge from the Ravens to Tosson Hill. There were great views over Coquetdale but here the wind was rushing over the exposed landscape, something we had not noticed down in the sheltered forest. 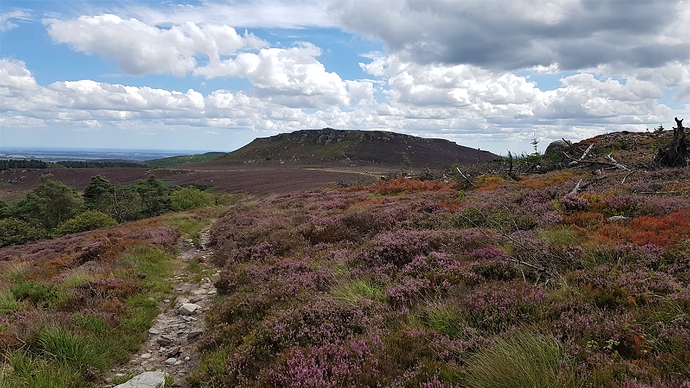 Helen set up the collinear next to the trigpoint (surrounded by a low stone wall for shelter) at the highest point whereas I set up in a slightly sheltered dip; the 10m vertical pole supporting the antenna still had a large bend from the wind. It was slow going on 40m with lots of static crashes and QRN leading to a high noise floor and only 18 contacts in 30 minutes but this included two summit-to-summits in Switzerland. Helen managed 5 contacts on 2 metres during this time with 3 “local” chasers, Dave (GM4PKJ) again in Benholm near Montrose (this time 175km away) and finishing with a mobile station in Peterlee. Propagation on 40m dropped so I decided to try 20m which turned out to be extremely poor but I did manage 4 contacts with 2 summit-to-summits in Switzerland which included 1 repeat with HB9BXQ/P. Band conditions were worse than the day before with contacts difficult to find. 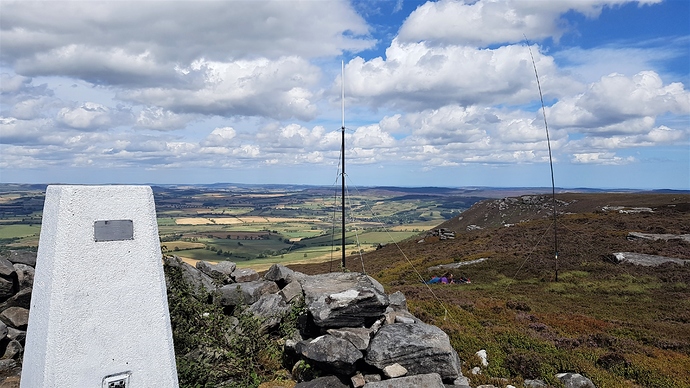 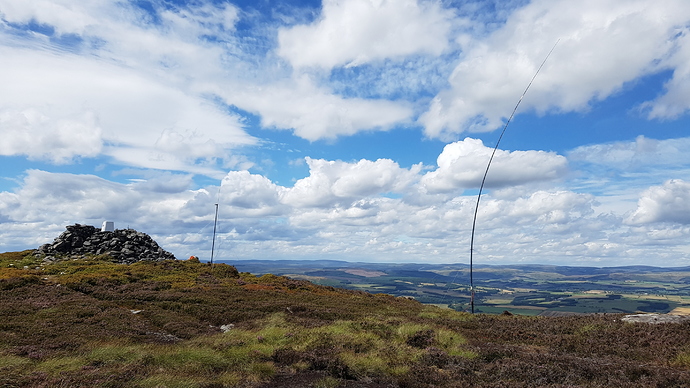 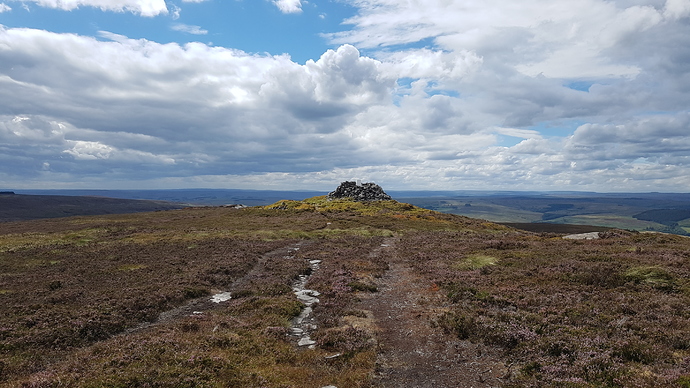 It was gone 4pm by the time we packed up and walked back down to the camper. The weather was holding so we set off on the short drive through Rothbury to the parking at the bottom of Long Crag. We knew that if we took the route from the east of the hill it would mainly be a walk up a forest track so hopefully not too difficult. This was the case until we reached a point on the edge of the ridge where we headed into the trees on a well-worn walker’s track and worked our way round to the main path that heads to the summit with its trigpoint. It only took 45 minutes to cover the 3.5km route as we were eager to get to the top.

We found another exposed summit and we set up much as we had on Tosson Hill with Helen by the trigpoint and me close by. Helen managed 5 contacts in 20 minutes without too much difficulty but in the same time I struggled on 40m with lots of European QRM adding to the QRN I had earlier, managing only 8 contacts. I moved onto 17m which sounded very quiet and had quick but chatty QSOs with four stations. It looked like it was going to rain but it was just storm clouds gathering as they do and we had a pleasant and dry walk back through the forest and down the track to the camper. 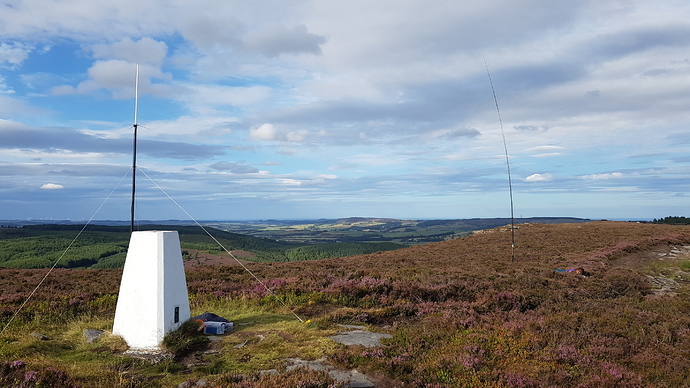 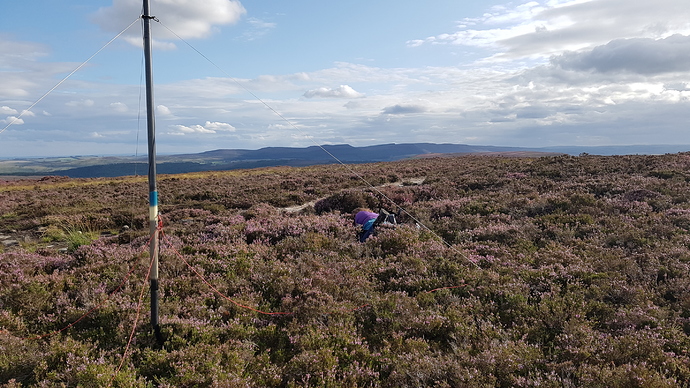 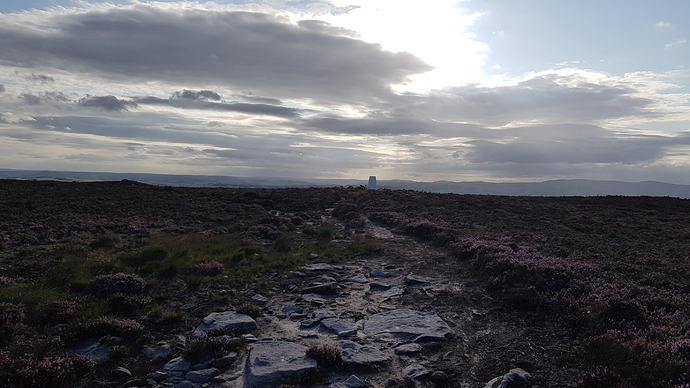 With 17km walked, it had been a long but enjoyable day. We returned back to the campsite for a shower and some dinner to contemplate whether the next day we should do the 11km round-trip up the 602m high Peel Fell with its climb of 400m.