This weeks Thursday has been a day off and fortunately the weather forecast predicted an inviting day with plenty of sun in the morning and only a small risk for thunderstorm in the late afternoon.

At the end of this crossing a new SOTA reference OE/TL-020 “Vordere Kesselschneid” (2001m ASL) waited for its first activation. But in order to arrive at this summit first a couple of other summits had to be crossed.

I started my hiking tour in the beautiful small city of Kufstein located in the valley of the river Inn, nearby the Austrian-German border at a height of just below 500m ASL.

The first section started immediately with rather steep stairs with nearly 300 steps. Uuuugh

After having got this stairs behind me a, at first flat and then rather steep, forest road lead me up to the huts “Ritzau Alm” and “Vorderkaiserfeldenhütte”. From the last hut I had already a nice view to my first summit “Naunspitze”: With its height of 1633m ASL the Naunspitze is unfortunately no SOTA summit, but nevertheless, hikers will be rewarded with a terrific view down to the valley of “Inn”: The next summit I had to cross after the “Naunspitze” was the summit of “Petersköpfl”. Its summit cross is located at a height of 1745m ASL: My last “Non-SOTA” summit on this tour was the summit of “Pyramidenspitze” (1997m ASL) a former SOTA summit, which has been deleted in favour of the new SOTA reference for the “Vordere Kesselschneid”. Nevertheless, the Pyramidenspitze is the most well known and therefore most frequently visited summit in this mountains: From the top of the Pyramidenspitze, I finally had my todays destination in sight:
The summit of “Vordere Kesselschneid”. With its 2001m ASL the highest summit in this mountain region. Despite being the highest mountain, it is a rather unimpressive summit that doesn’t get visited too often.

By looking at the snowy path up to the top of this mountain, it was clear to me that for a longer time nobody took the effort of hiking up to the top. The following photo has been taken after climbing down again and it shows my single trace in the snow: Finally, after six non-SOTA summits, I arrived at the sole SOTA reference on this mountain ridge. From the Vordere Kesselschneid I had a nice view back to the Pyramidenspitze with its steep cliffs to the east: I quickly set up my dipole antenna nearby the pile of stones that marked the top of this summit. From this position I had a splendid view down to the valley of Inn and all surrounding mountain ranges: The following SOTA activation has been surprisingly pleasant. I didn’t expect such good HF conditions but with 24 contacts on the 30m band and additional 13 contacts on the 20m band I cannot complain

With my last photo I want to cope with two present myths: Thanks for all calls and for spotting me on SOTA watch.

What a glorious day’s mountaineering, Stephan, I envy you!

Why should I peek into Dayton, when I already know that the smallest full-featured HF SOTA radio on the planet is already playing well here on the Austrian summits

Well done and well said, Stephan!
Nothing to add, thanks!
Photo shows my side of the s2s (photos taken by Dan HB9IIO). 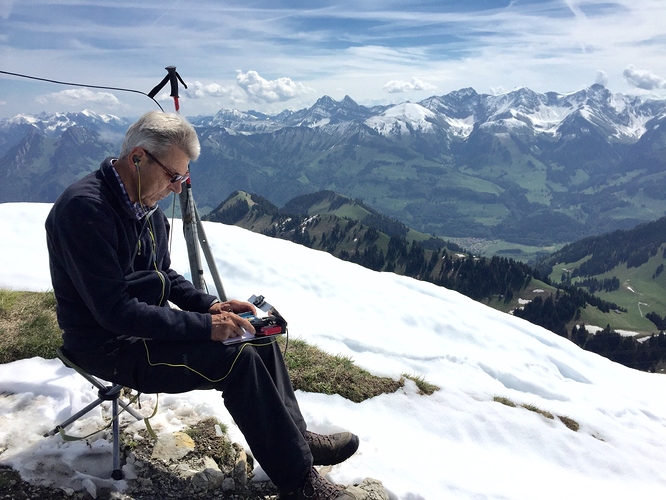 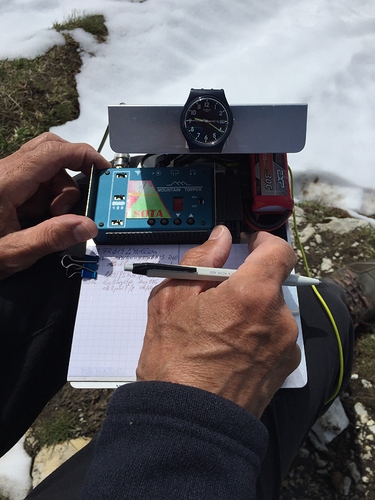 You certainly earned your points Stephan! Congratulations on the first activation

Super-duper! What a great tour across some of our beautiful Austrian mountains

!
You seem to have caught perfect weather on top of it!
Congratulations on the first activation!

… as well as you can enjoy a salami (or any other sausage, hi) slide by slide (named salami tactics) you can climb a certain mountain indirectly via several other mountains … just for fun.

ok, thanks, I had never heard of that expression before. 73.

What a glorious day’s mountaineering

Indeed, Brian.
Almost unbelievable, that I was still a little bit hesitating in the morning because of the overall length of the hiking tour. But with all the nice views from the intermediate summits and the fine weather I was finally very glad that I won the fight against my inner temptation

Photo shows my side of the s2s

Thank you, Heinz for sharing the photos from your activation. It’s always interesting to see how the “other side” of a contact looks like. And it seems that you did enjoy also a fantastic panorama on your SOTA summit.

Your MTR3B setup looks also very professional. Everything properly arranged and based on a very functional design.

Hope to hear you soon from a SOTA summit.

You certainly earned your points

… as well as you can enjoy a salami (or any other sausage, hi) slide by slide (named salami tactics) you can climb a certain mountain indirectly via several other mountains … just for fun.

Heinz did explain it exactly.

The hiking tour was rather lengthy with an elevation gain of abt. 1600 to 1700 height meters and an overall hiking distance somewhere between 17 and 18km.
Such a long hike needs some motivation, at least for me ;-), and by dividing the complete tour in several parts, i.e. salami slices, the tour never got boring because on each intermediate summit I could re-motivate me again by enjoying the great views.

No politics intended, instead I might have been a little bit hungry when I created the report

Hi Sylvia, I could not have found better words myself for this beautiful hiking tour

Really a highly recommended hiking region; and there are also some nice alpine huts to stay, if you intend to arrive from afar.