Too many times I’ve seen my callsign ending up incorrectly in the activator’s log on the SOTA database. For most of these contacts I’m 100% convinced though that my callsign was copied correctly. The problem here, I strongly suspect, is that handwritten logs are used and later on, once at home while adding the logs to the SOTA database, the activator can’t read his own handwriting anymore. Some activators might not even be aware of this. The I in the handwritten log is just added to the activator’s log, the activator not knowing anymore that it should be a J, as he did copy correctly over the air. Or an O while it should be a D, or an N while it should be a M.
During activations, callsigns are often written down in the log quickly and not seldomly under adverse conditions. So it’s understandable that one has trouble reading his own handwriting once at home after the activation. I know the problem because once at home after a SOTA or WWFF activation I sometimes also had that same problem with my own handwritten log.
I’ve seen my callsign ending up in activator’s logs on the SOTA database as PA7MDT, PA2MDJ, EA7MDJ, DA7MDJ, PA7NDJ, PA7MDI, PA0MDJ, PA7MOJ, PA7MDY, all for contacts that I’m 100% sure of that my callsign was copied correctly by the activator.
It’s not the end of the world, but still I’d like to make a plea to all the activators: please take some more time and rest to note down the callsign of the chaser in your handwritten log. This will avoid not being able to correctly read it once at home while adding the log to the SOTA database. Be sure to use the writing utensil that works best for you. I’ve found out that a pencil works better for me than for instance a ballpoint pen.

Thanks and 73 de Michael PA7MDJ

Manual logs on summits can be very challenging to write, which is why I’ve switched to logging primarily on my cellphone. That also allows for lookup to the QRZ database, so that you can cross-reference names as well. Of course this doesn’t work for all.

When activating I try real hard to get the callsign correctly printed in my logbook. Adverse weather or a precarious sitting position definitely affects the quality of my printing. I do try hard to print legibly, and if I need to make a correction that is hard to read, I will also put the callsign in the Notes column of my logbook. Having said all that, there are times when I don’t get the callsign correct (especially in marginal cw QSO’s) and I will look at QRZ for a hint that the person does SOTA, or I will check the SOTAWATCH database for the Association of the number in the callsign to see if there is a likely candidate, Finally, if I have a question on a callsign or if it is NIF, then I will check the “See Who Chased Me” for the summit to see if the missing Chaser logged the Summit when I was there.

Michael, everything you surmise about hand written logs is exactly true in my case! I have shaky hands to begin with, and it gets worse after a hike up a mountain. My normally bad writing is even worse. I then transcribe the field notes once I get home. Sure enough, I make errors in copying. It helps to be able to check who logged me and find those errors. IIRC, one of the mods complained that people were using that function to correct their logs of possibly not properly exchanging call signs over the air. For me, it’s mostly for typos. Here’s one error you didn’t list that I’ve done - during transcription completely skipping a qso that’s in the field notes. Found out about that when I got a qsl card from an OM and it wasn’t in the SOTA database. Dug up the old field notes, and sure enough he was in it.

Your complaints are well taken.

if I need to make a correction that is hard to read, I will also put the callsign in the Notes column of my logbook.

When I was studying at the Engineering School, we had to spend some time practising to learn “rotulación industrial”, which is writting clear letters, numbers and symbols on a drawing for other people to be able to understand and correctly interpret what it’s on the drawing.
I belong to a time when the drawings were drawn by hand, so writing dimensions, angles, notes and comments with a clear writing was absolutely essencial to avoid some unwanted disasters.
I think it was a very good thing to learn and work on this discipline, and it has proven very useful in real life several times.
I highly recommend it to anyone. 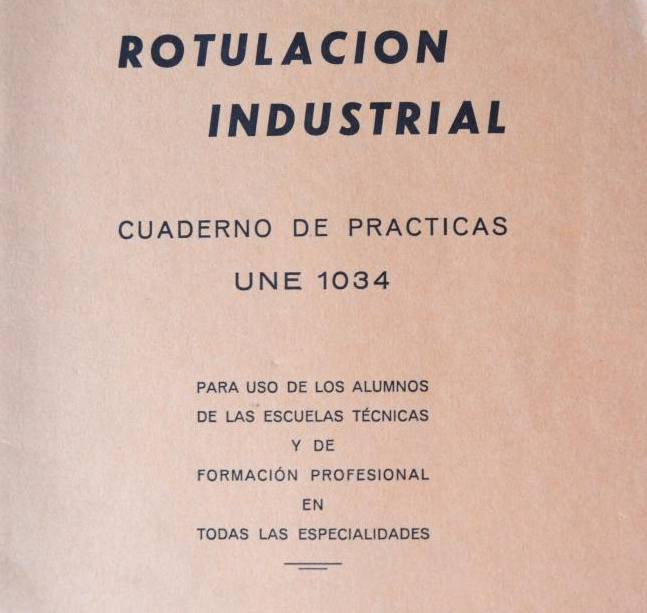 My printing took a turn for the better after two drafting classes in high school. It was part being taught how to properly print for legibility and partly for being penalized for sloppy printing. I still remember the teacher telling me to stop making “farmer 4’s” (i.e. open at top rather than closed). I’m not sure where he got that expression, but I sure remember it! 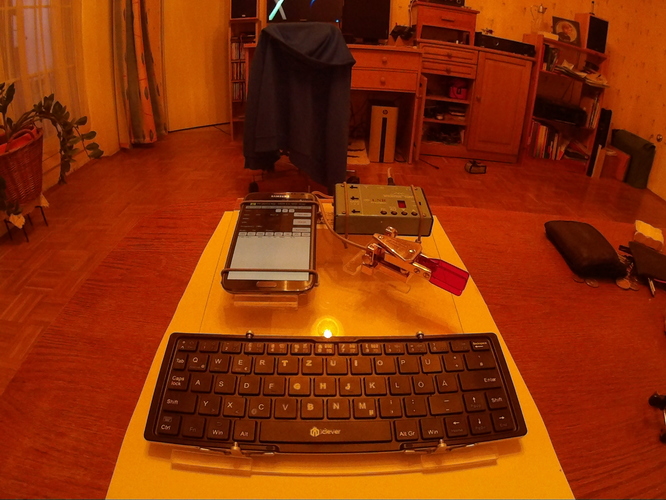 How did I ever live without it!

I prefer paper logs - just has a better feel to it. But I recognize that my handwriting can add to errors. I also copy the call sign a second time in the margin if I notice it’s unclear.

I practice writing J and I a lot, so I don’t have as much trouble with those…

Up to now I have been using paper logs and a pen but during my last activation we had “unforecasted rain” - a frequent occurrence in the mountains. Fortunately, my buddy had a extra pencil but with soggy paper even that wasn’t very clear. So at last I’ve been won over to using an iPad Mini 4 (have an Otterbox Defender case on order for it) and the HamLog app for logging. Several of my activator buddies have been using this very successfully. As a back-up I will now carry a Write-in-the-Rain notebook and a pen capable of writing underwater. Always learning from my experiences…

Hello Michael,
Some of us (like André F5UKL) records the all QSO and can listen to them again when home!
For myself i use paper log on summit and when at home the soft from Alain F6ENO (saisie_sota) that uses cross-reference with the sota chaser name. When there is no name, i know there is something not good!
As some activators in the doubt, i use also the “Who chased me” from the database.
73 from Gerald F6HBI

i use also the “Who chased me” from the database.

Where is this located? I don’t see anything similar indicated in the database.

Where is this located? I don’t see anything similar indicated in the database.

You must be logged in to the database to see it. 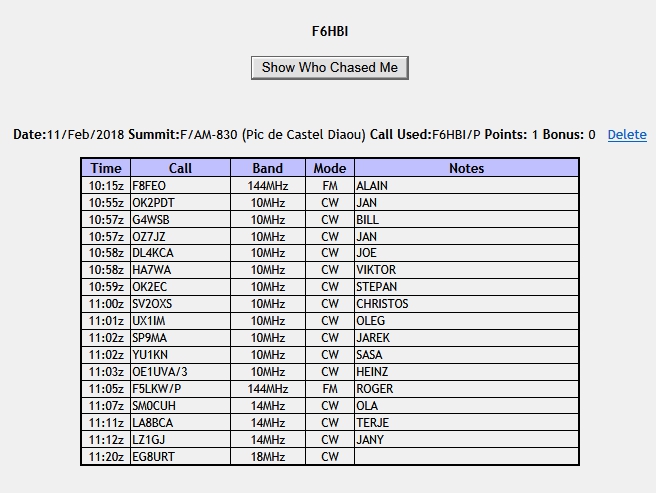 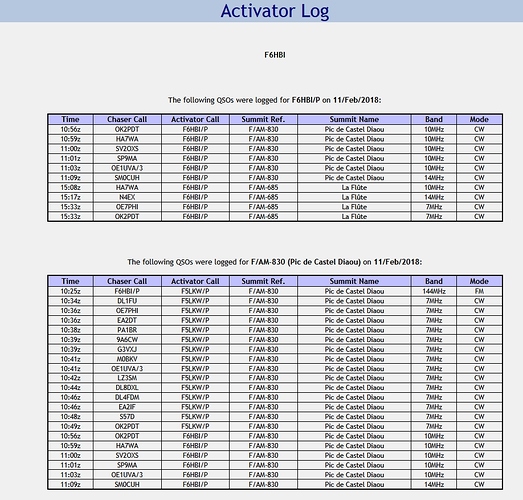 I can go to sleep tonight knowing I learned something today!

I just learned something. After all of these years I have never saw the “show who chase me” at the top of the page. Learn something new everyday.

Guilty as charged. I have made several incorrect log book entries due to my poor hand writing while balanced on a rock in the wind.

I tried logging on the phone but found it was more trouble than it was worth. The "show who chased me "function is going to get put into the trick bag from now on.

Oddly, my most recent activation (05/Feb/2018) shows a blank when I click the “show who chased me” button. The stations I logged show correctly on the previous page however.

Maybe you should enter the correct date for the activation?