What a honour to be the first one to do SOTA from a new summit and from a new region and to start even a new association! Fredi, HB9BHU, did so from summit Morne Bigot, FM/FM-008, on French overseas territory Martinique, located in the Lesser Antilles.

Despite a world trip, radio amateurs are close to those at home. Enjoy your time off, Fredi, and thanks for sharing it with us. 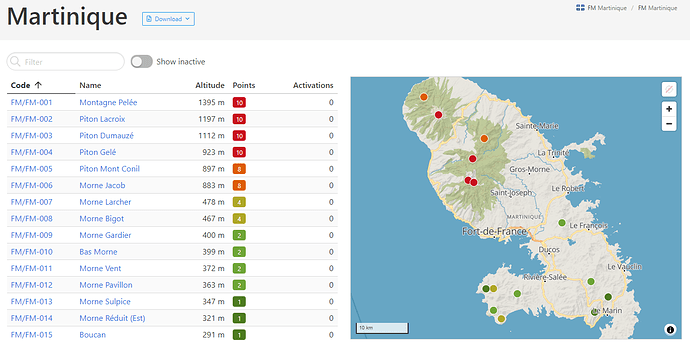 A blanket of zeros before today: FM, the Martinique asscociation

Congratulations, Fredi @HB9BHU, and thanks for the QSO. It was a honor to me being in that very first activator log of the FM association.
73,

Congrats to this nice Trip, and tnx fer qso, yesterday. Gd luck and hpe to meet you agn
Paul DL6FBK

Was a great pleasure to work Fredi in Martinique Island yesterday, reminding me of my stay there from 2004 to 2007 (FM5JC) where I was far to the SOTA program

The 10 pointers are a bit hard (climate and vegetation)

Fred give us also FG summits 2 years ago, among others!

Overseas departments and regions of France

Thank you for highlighting the name change for the French Territories becoming known as Overseas Departments. I guess that can be likened to the former British Empire being renamed the Commonwealth.

You did a great job on the 6m band during your posting in Martinique all those years ago. Just checked my log book as I did not know you when you were FM5JC until we met through SOTA some years later!

Sorry about the dupe on 6m with you in 2006… These days I only try for one QSO with each DXCC I go after… multiple QSOs in the same year are frowned upon.

Looking at Fredi’s log from FM/FM-008 it appears that I was the only UK station to make it yesterday. There was no reception for me when he was using 18 and 21 MHZ. So now one starts to think, will he activate any more there during his stay…

Thanks for your own souvenirs and for bringing the wording to my attention. It is important to name things correctly nowadays and this is difficult already in the native language. I’m sure that this simple change is the result of a long story.

No QSO with Fredi today on FM/FM-007, he was very weak here 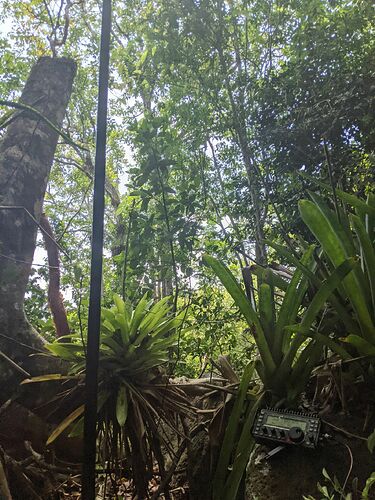 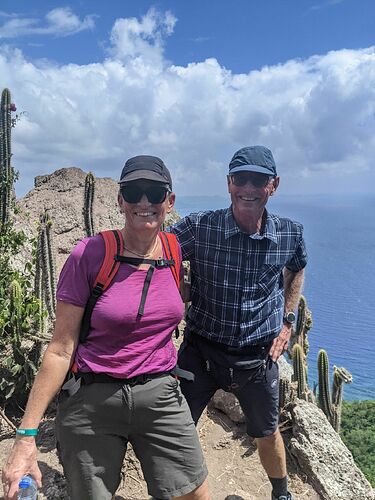 hb9bhuhb9xam1773×2364 624 KB
Thank you for your comments and especially Markus for publicising my activity here in Martinique.
It was a special moment when I could start the activation on Wednesday. The great thing is that every QSO is also a DX! I was working the KX3 and a homemade 6m high 4-band EFHW with three coax traps. Yesterday we did a round trip, which passes Morne Larcher. I am sending attached a picture of Marianne, HB9XAM and me on a beautiful viewpoint below the summit FM/FM-007, which has no path leading up to it. The summit has very lush vegetation and it is difficult to get through. Amidst the trees on the summit, the normal noise level was so weak that I thought my antenna was defective. Also the “FT-8 beacon” was only audible with S2. In the end I just managed 4 QSOs.
Tomorrow I will go to FM/FM-008 again and set up my 17 m Deltaloop. I also have a Hardrock PA with 50 watts with me. Maybe it will even work in SSB.
13 Likes
HB9DIZ 6 November 2021 07:25 #9

Fredi has alerted on SOTAwatch for today 1100 UTC, so maybe you can catch him (and others) on the air along the trans-atlantic event!

Fredi was omnipresent today from FM/FM-008 with nice signals

Tomorrow I will go to FM/FM-008 again

I called with no answer.
Anyway, thanks a lot - it was my first trans-Atlantic S2S

TNX for all QSOs! I had some QRM from nearby power lines and telecom installations, resulting in a noise level of S2. I heard a number of stations calling, but unreadable - sorry. The QSB was also very strong.
In the coming days I will try to activate Montagne Pelée - away from man-made noise.:-)! 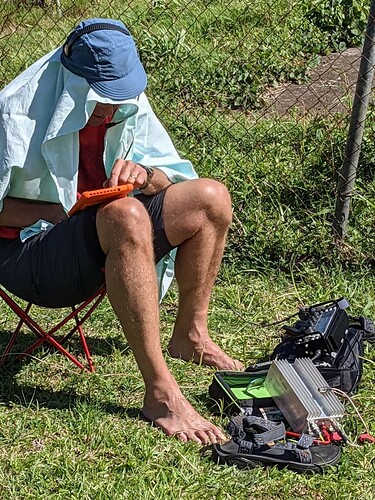 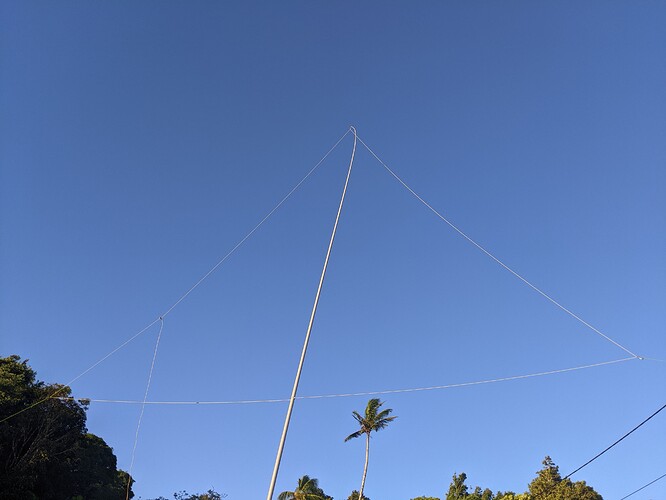 Many thanks for your activity in the Trans-Atlantic S2S event Fredi. I was really pleased to work you on 17m, as indeed I am sure we’re many others.

Tomorrow we will travel far into the mountains to the foot of the volcano Pelee. The weather forecast for the weekend is bad, so we may activate FM/FM-001 on Thursday and/or Friday. I will set a SOTA alert! We hope to work some DX and may be S2S!
73 de HB9BHU+HB9XAM

Was looking for you ! I hope you make a nice climb with nice weather

I was thinking on humid situation

Maybe can we work you on other summit before your leave The Martinique.

73 to you and Marianne
Éric

Hello Eric
Unfortunately, the weather was really bad. There is always fog on that mountain, but yesterday it rained again and again and on the summit the wind was so strong that Marianne had to hold the antenna all the time, so it was not possible to do a long activation

!
Frustratingly, a few chasers were continuously transmitting their callsign, regardless whether I was transmitting myself or in the middle of a QSO. Thus, some QSOs and one S2S were lost in their QRM.
But all in all a great day and I could at least catch som old SOTA friends as DX!
73 de Fredi,FM/HB9BHU/P 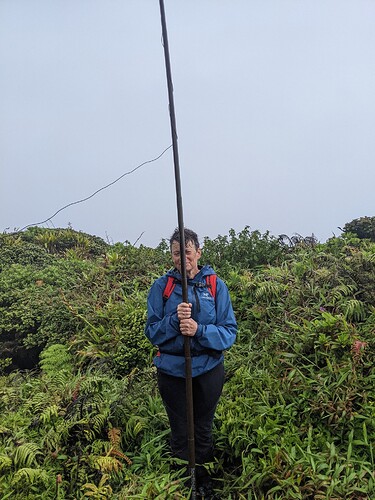 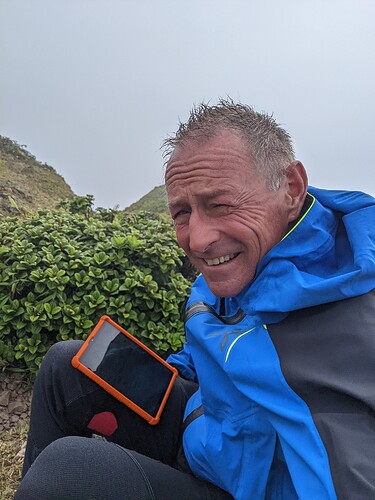 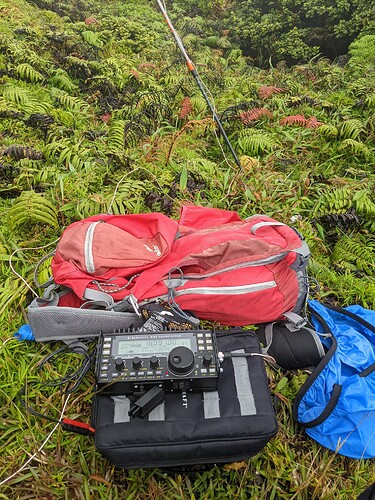