A little light SOTAing in France

I had a week of vacation to use and hadn’t seen my sister for a little over 2years so it was time for a trip to the Nîmes area, where she has lived for the last 37 years. Normally the WX is nice this time of year but it was uncommonly hot peaking at 35C one day, 30 the next. The rest were a pleasant 25-28C. It was 8C back in Scotland one day so I was pleased to be 1500km South!

There are a zillion and half summits in France, plenty to activate for the 1st time. But I didn’t want to spend the whole time SOTAing and only had some lightweight walking gear so I picked simple and easy summits. And you soon learn climbing 300m in 28C heat is just as tiring as climbing 900m in 4C cold!

Just above the harbour town of Sète. The A9 motorway has been moved, extended along with the TGV line to Spain. It caused the GPS in my hire car to have a major fit so don’t worry if this happens to you. Plenty of parking at the summit, an easy drive on. Diabolically hot and sunny so I applied lots of suncreme and displayed my fine white British legs to scare the local! Activated on 20/30m CW using vertical and 817.

View of the bay. 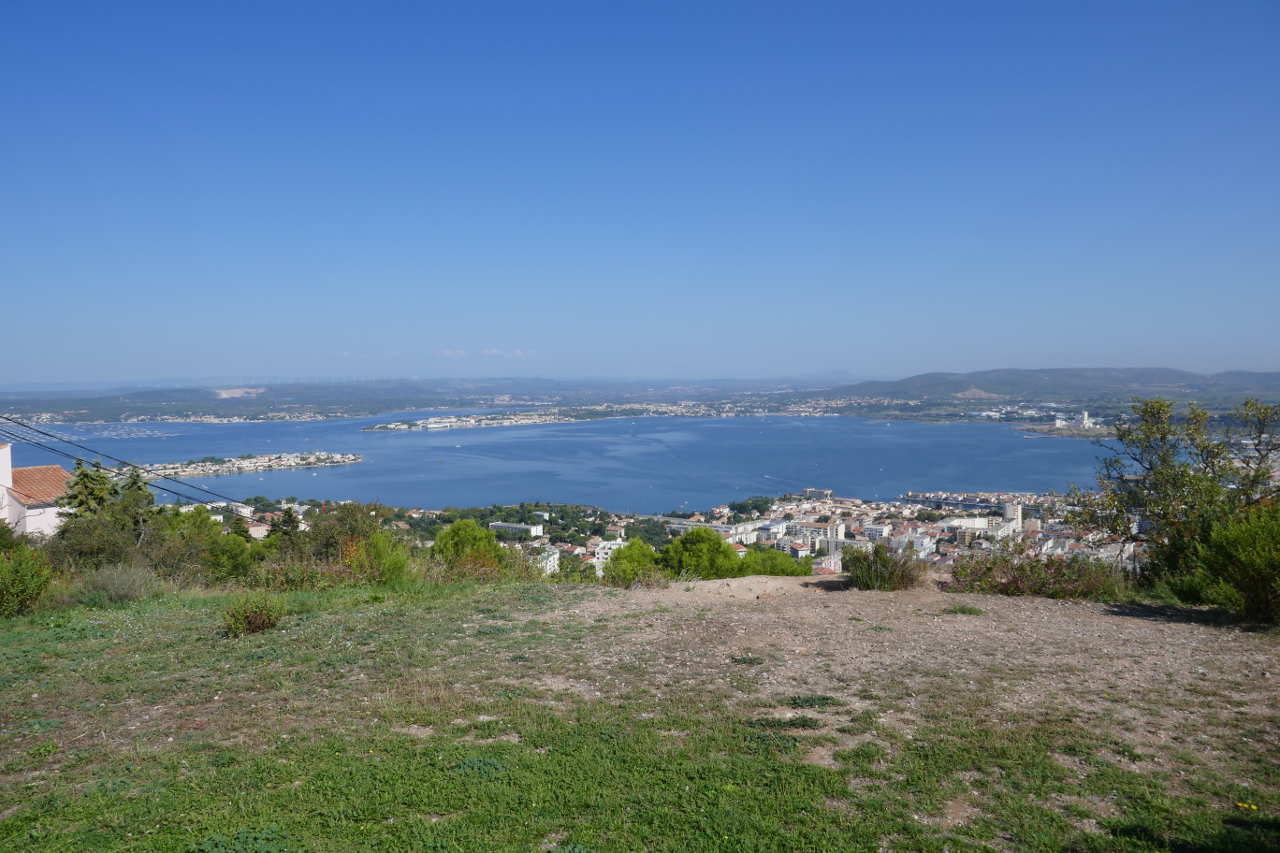 Large cross for the church on the summit. Someone has turned the blue on the sky up to 11. 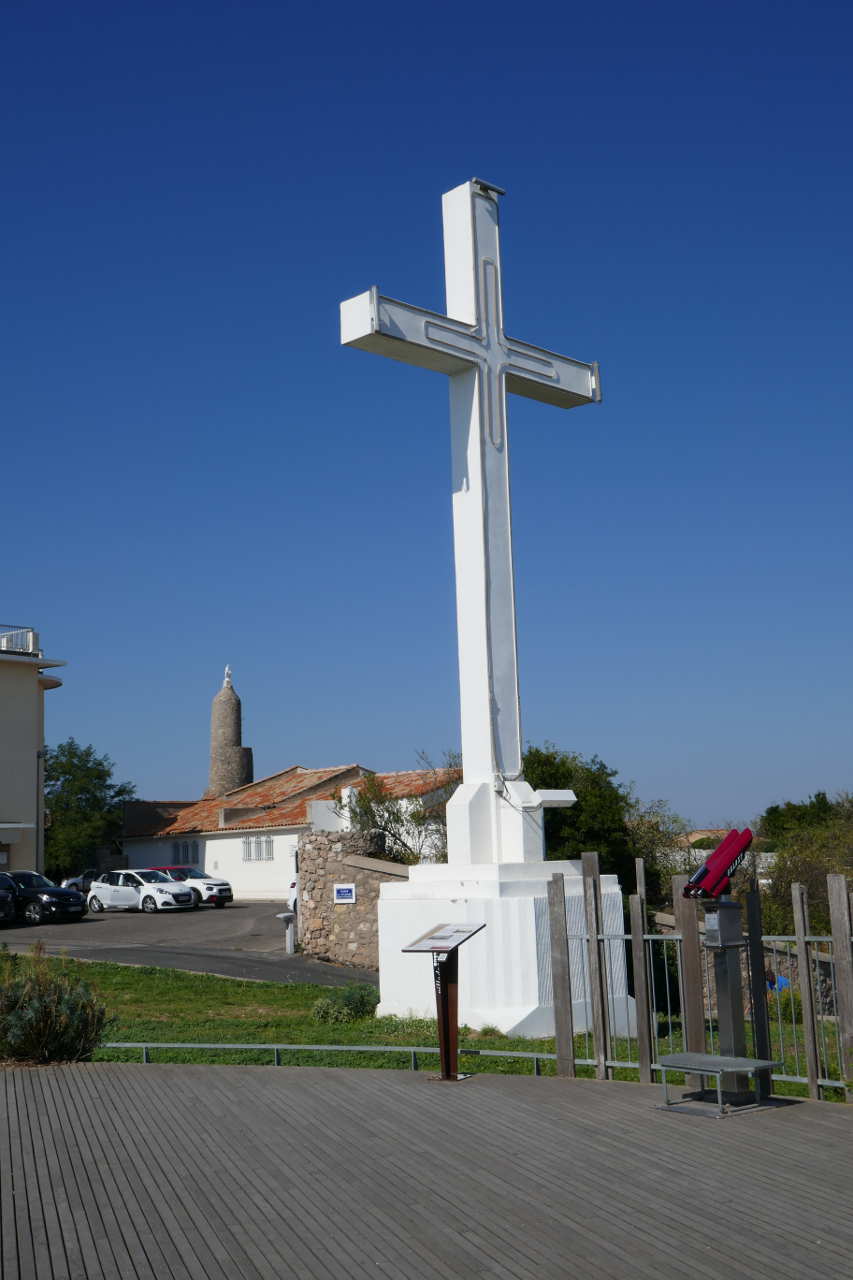 The local QRM source with my antenna. About S1-2 noise on 20m but not an issue with the 500Hz filter in. 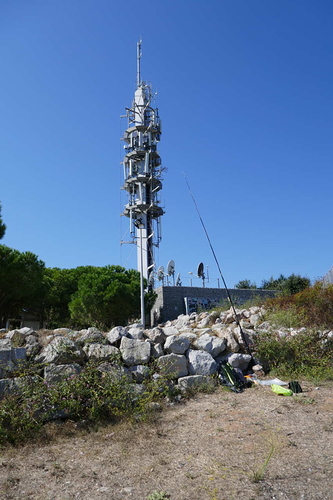 Easy activation though my phone wouldn’t play for a while.

This about 12km up the coast and was trivial to find as my car came with a belting GPS for nothing extra. There is an old monastery here with a nice shaded car park. Just as well as it was 33C when I parked

About 20-25mins on the tracks to the summit. Though the high ground doesn’t agree with the summit position but it’s obvious where the top is. Same equipment as Mont St Claire. Same rubbishy RF conditions.

Big marker at the summit. 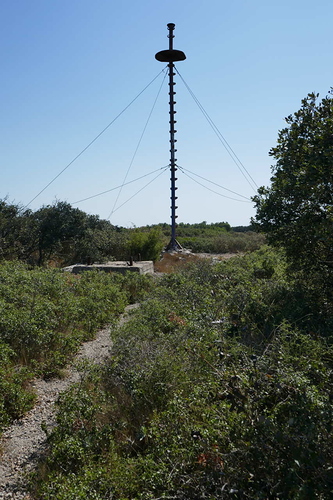 Antenna in the shade, got to keep out of that sun. 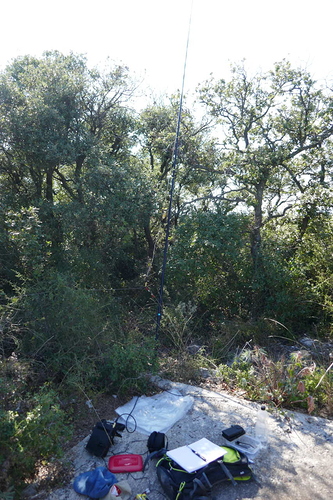 A local keeping out of the sun back at the monastery. 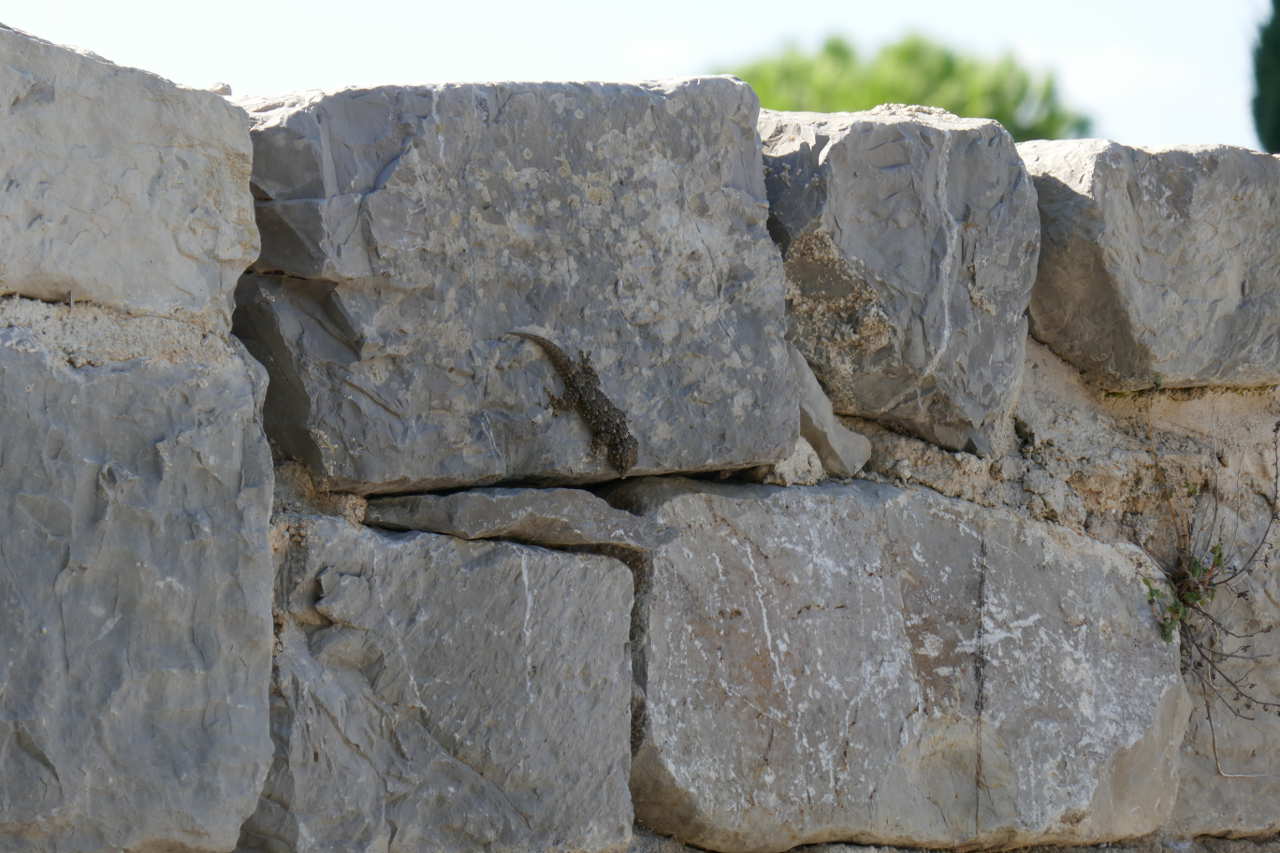 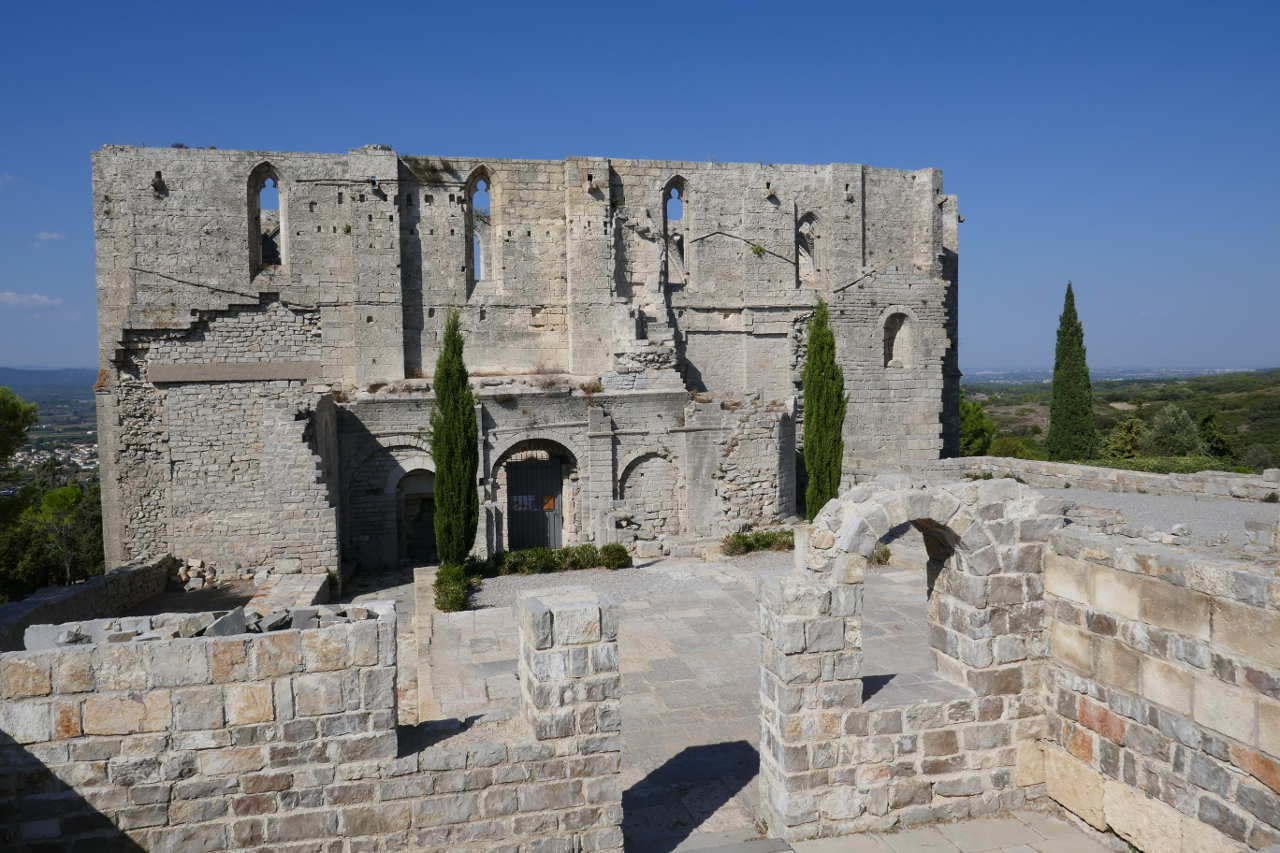 Previously unactivated and about 20km from Mont Ventoux, the local big summit. My brother-in-law goes hunting around here and said it’s trivial. He was right about 25mins from the car park at Col de l’Homme Mort to the top on a lovely track that was in the shade 60% of the way. Vertical 20/30 and trapped EFHW for 40/30/20 CW&SSB with FT817.

Mon Ventoux, F/CR-007, famous for being visible from everywhere around here and the Tour de France. 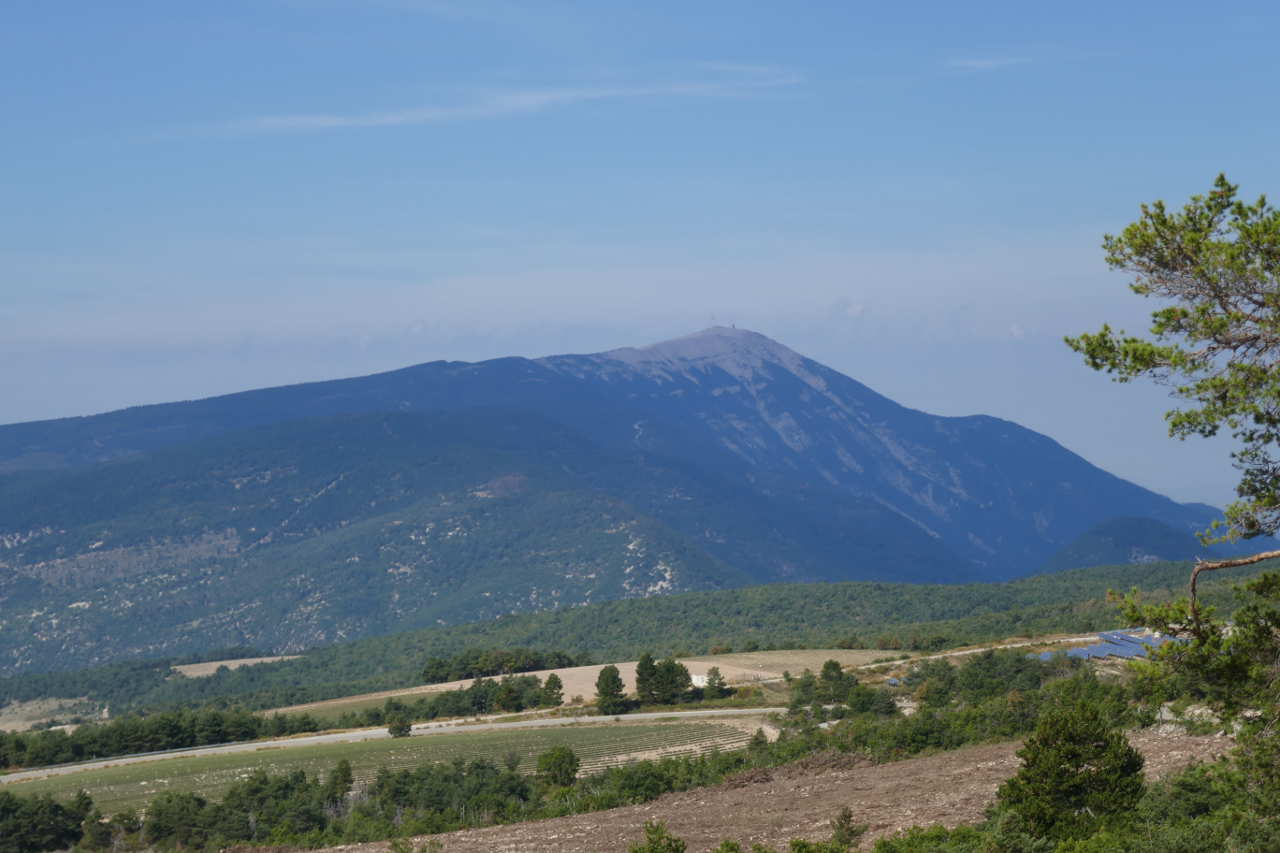 Summit cairn and Ventoux. I operated from the dead branch on the ground. Shade from the trees, mobile signal and something to tie the pole to. 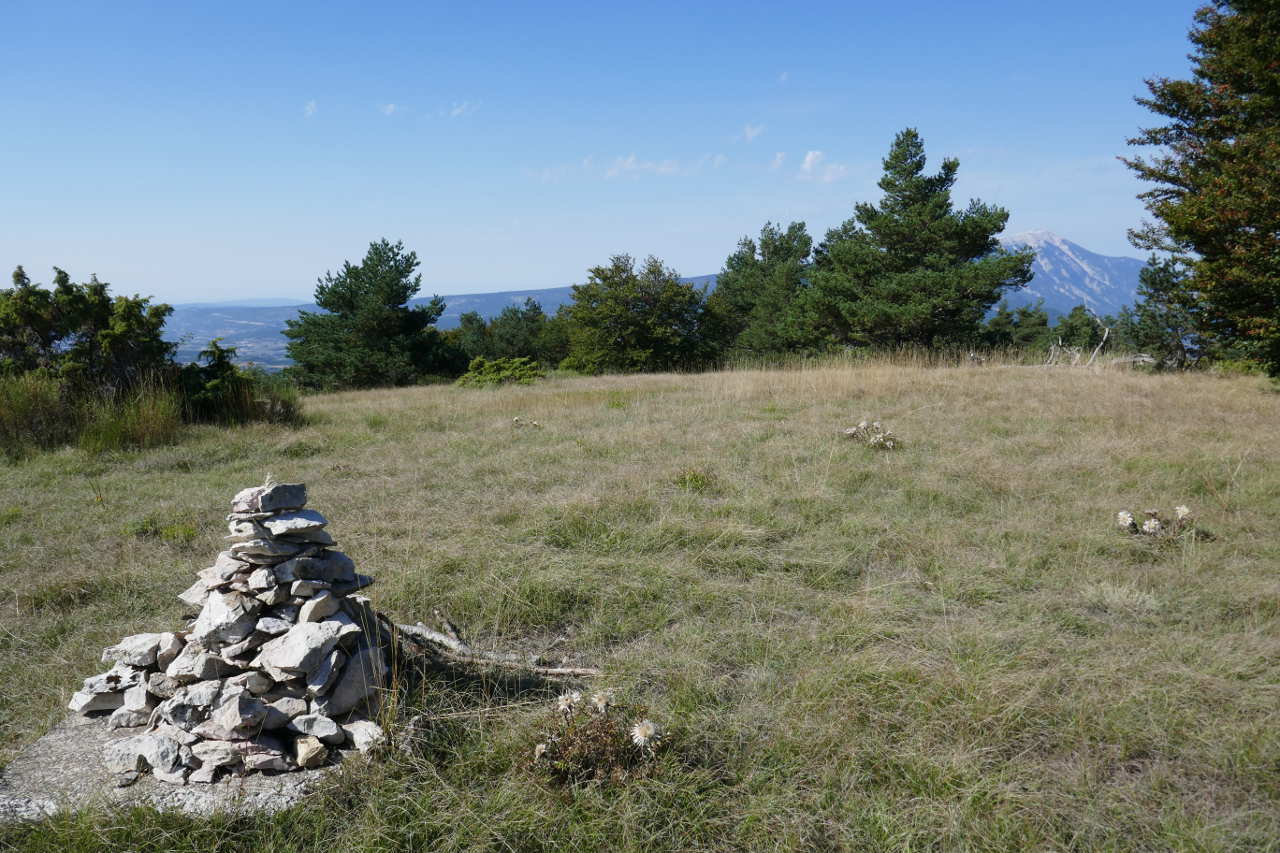 A Happy Activator after finally working some SSB QSOs on 40m. 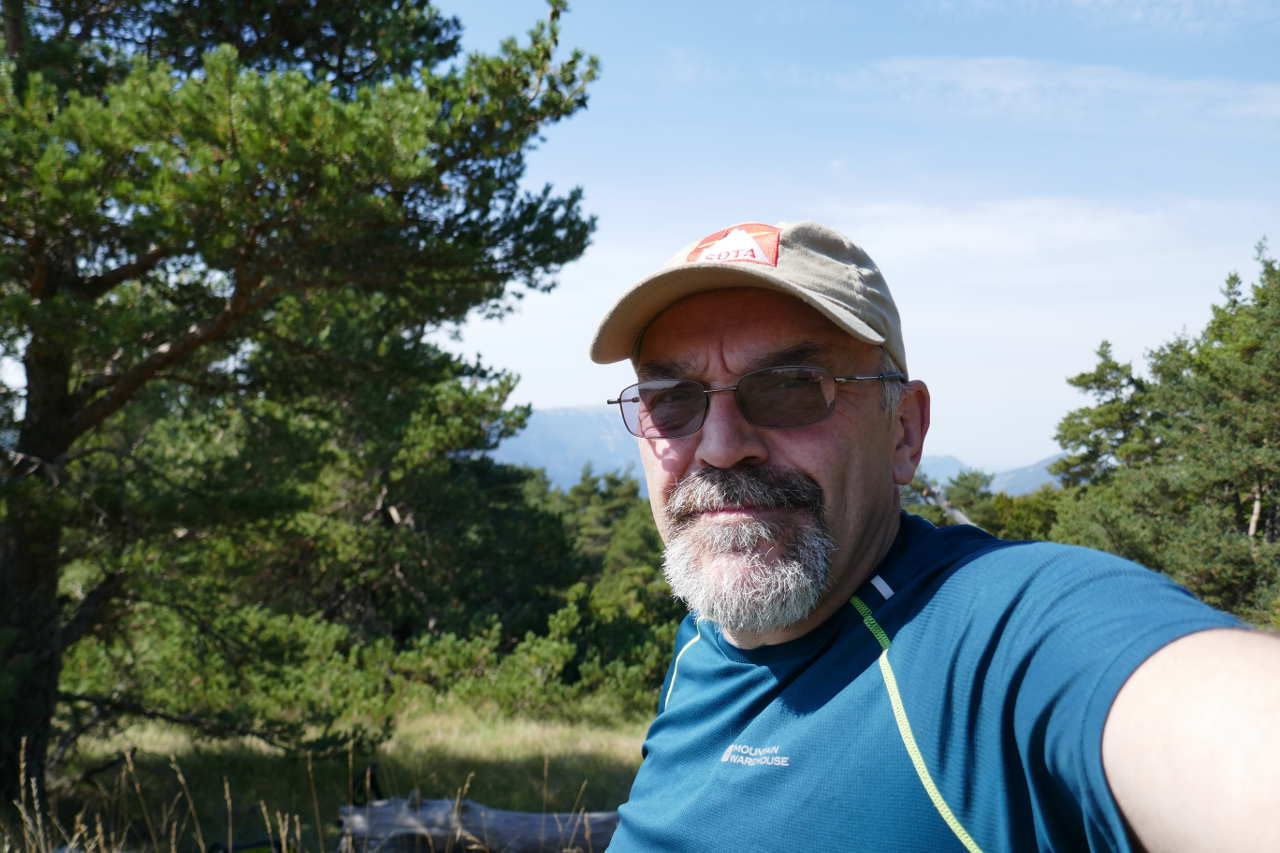 The EFHW worked very well with 4.5m vertical up the pole, tied to the vertical dead branch and the rest strung in the bushes behind. 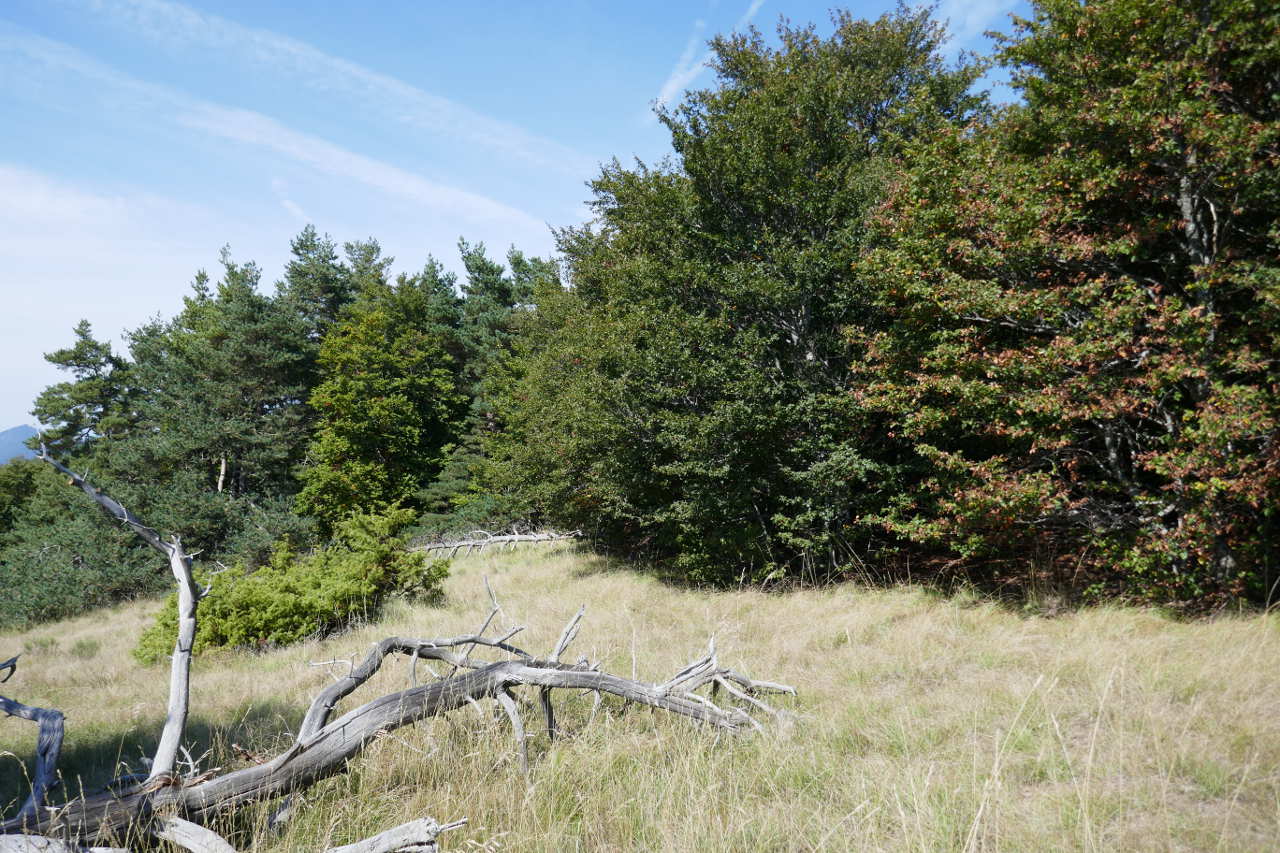 Obvious and simple track leads from the car parking to the summit. Lots of shade too! 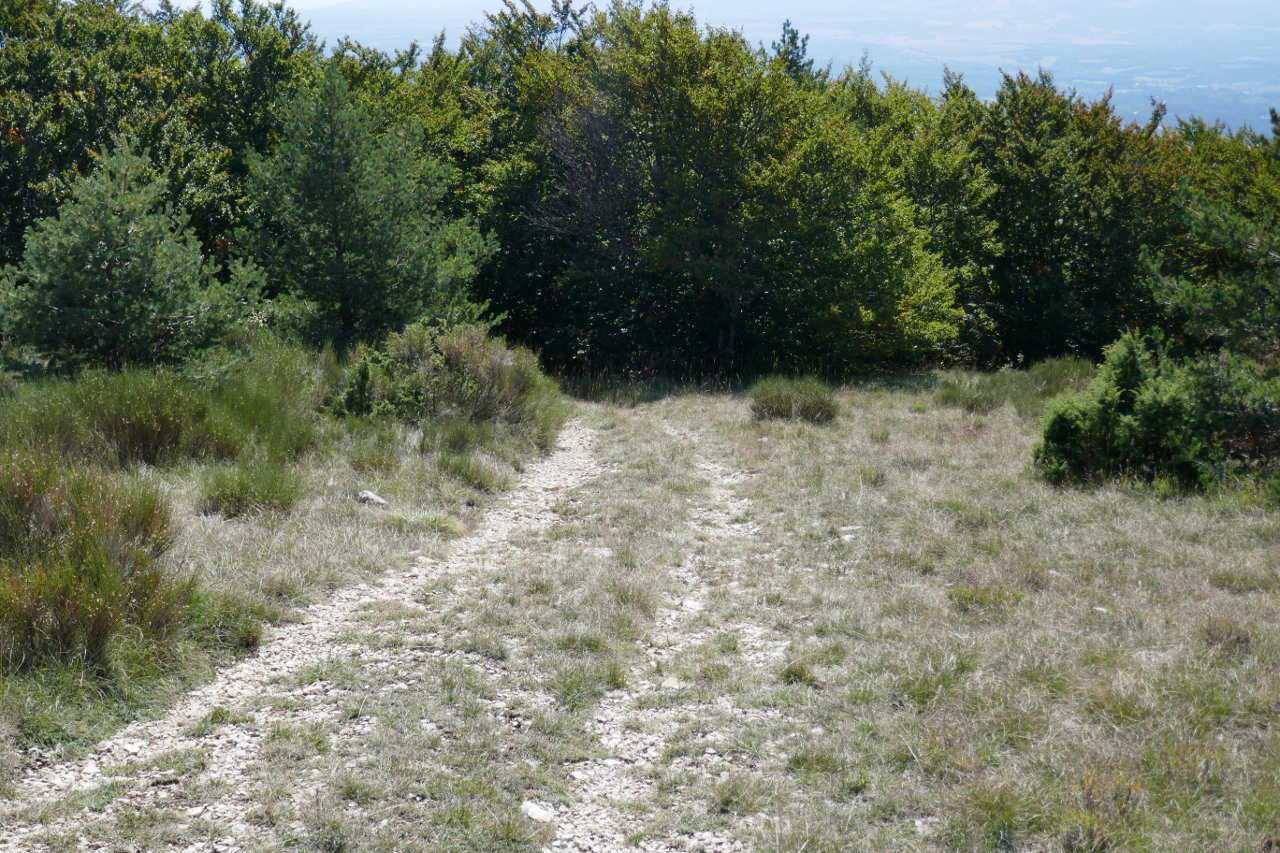 Parking place which is higher than most of the summits in Scotland! 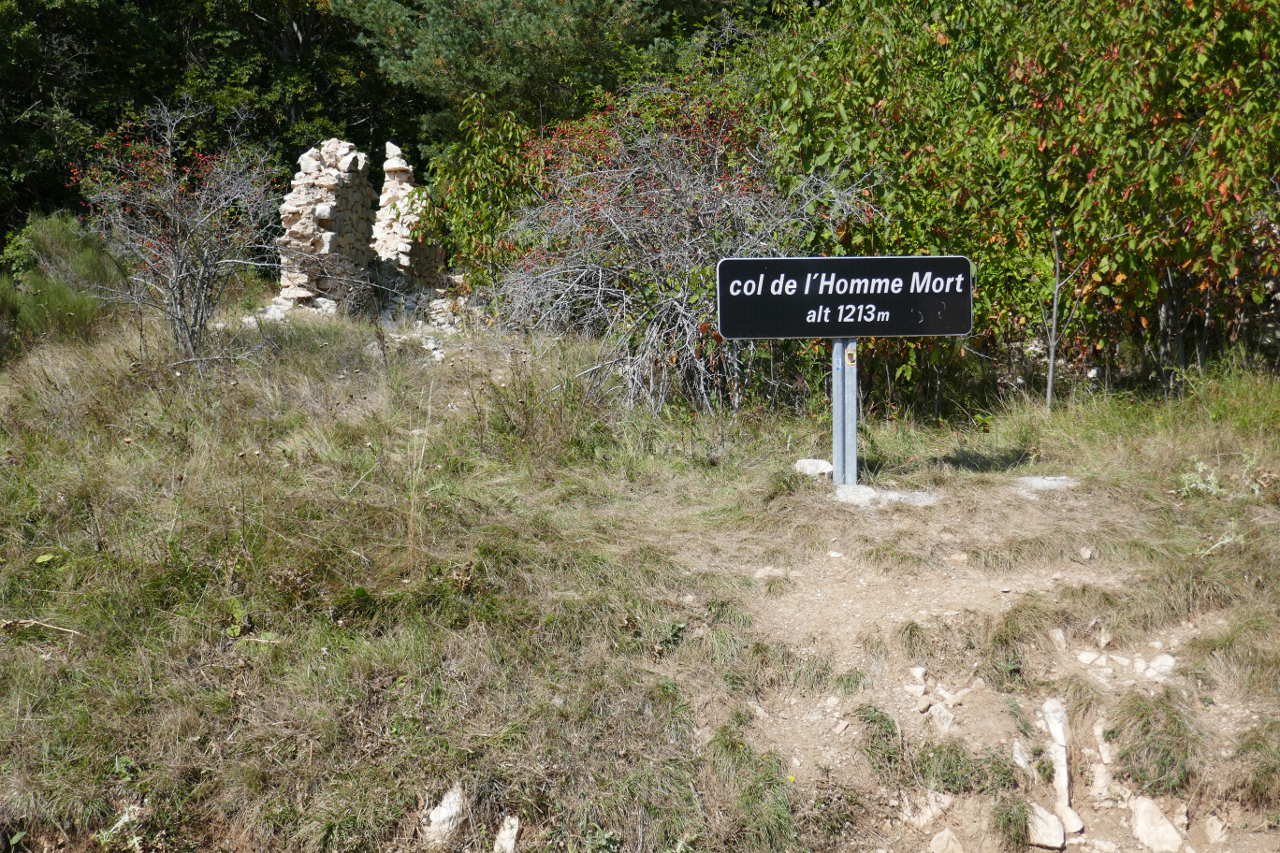 You can climb it by foot, by bike or drive to the top, which is what I did. It’s an easy road TBH the biggest problem being the daredevil cyclists on the way down as some reach almost the speed of light! Very busy with hundreds of visitors. I set up behind the viewing area but the transmitters make lots of RF noise, S7 on 20m

My French is poor but even I was able to understand the guy who said in French “you wont catch many fish here”. Good to know the same things are said no matter where you do SOTA

Operating position, the pole tied to a metal crash barrier. 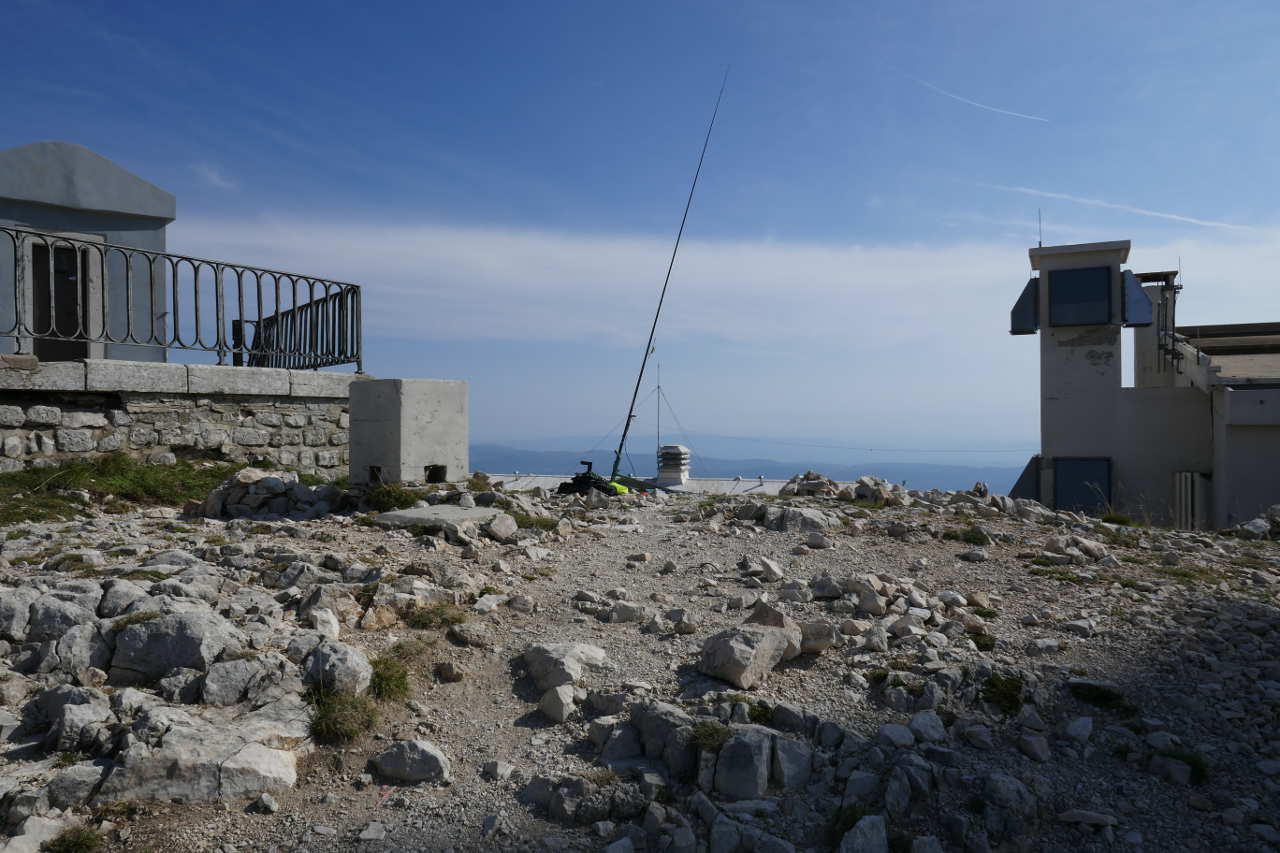 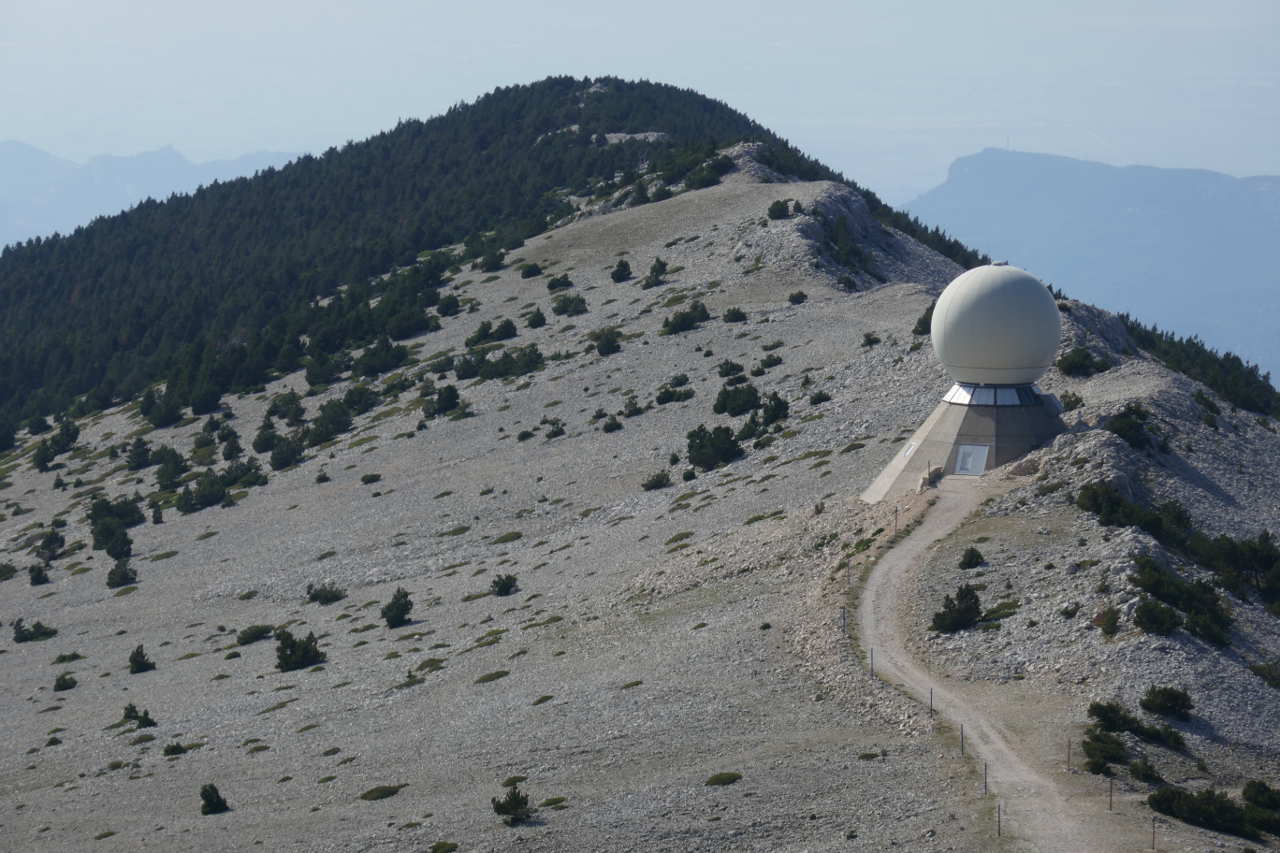 More bleedin’ interference from all the gear here but a brilliant view. 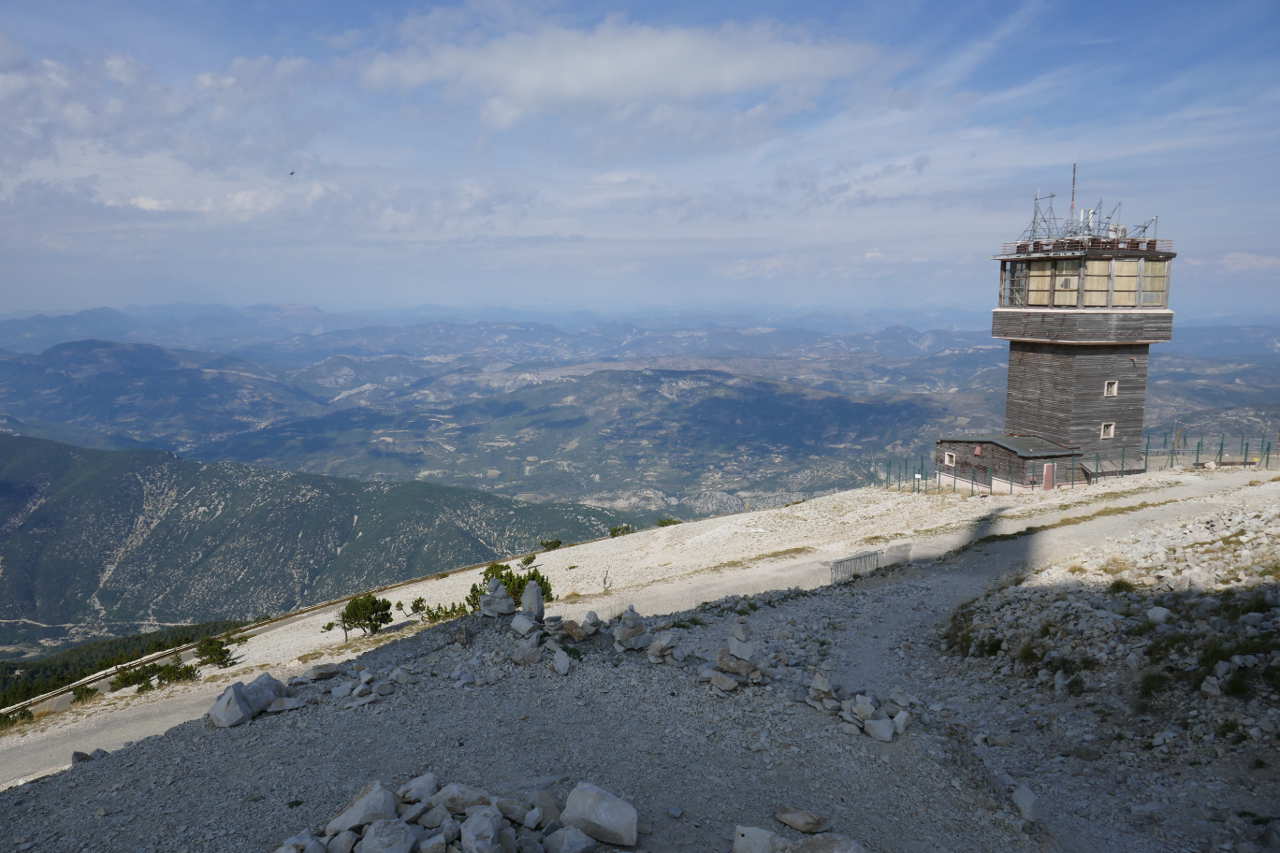 A very big transmitter’s antenna, shrouded to protect it from wind and ice. 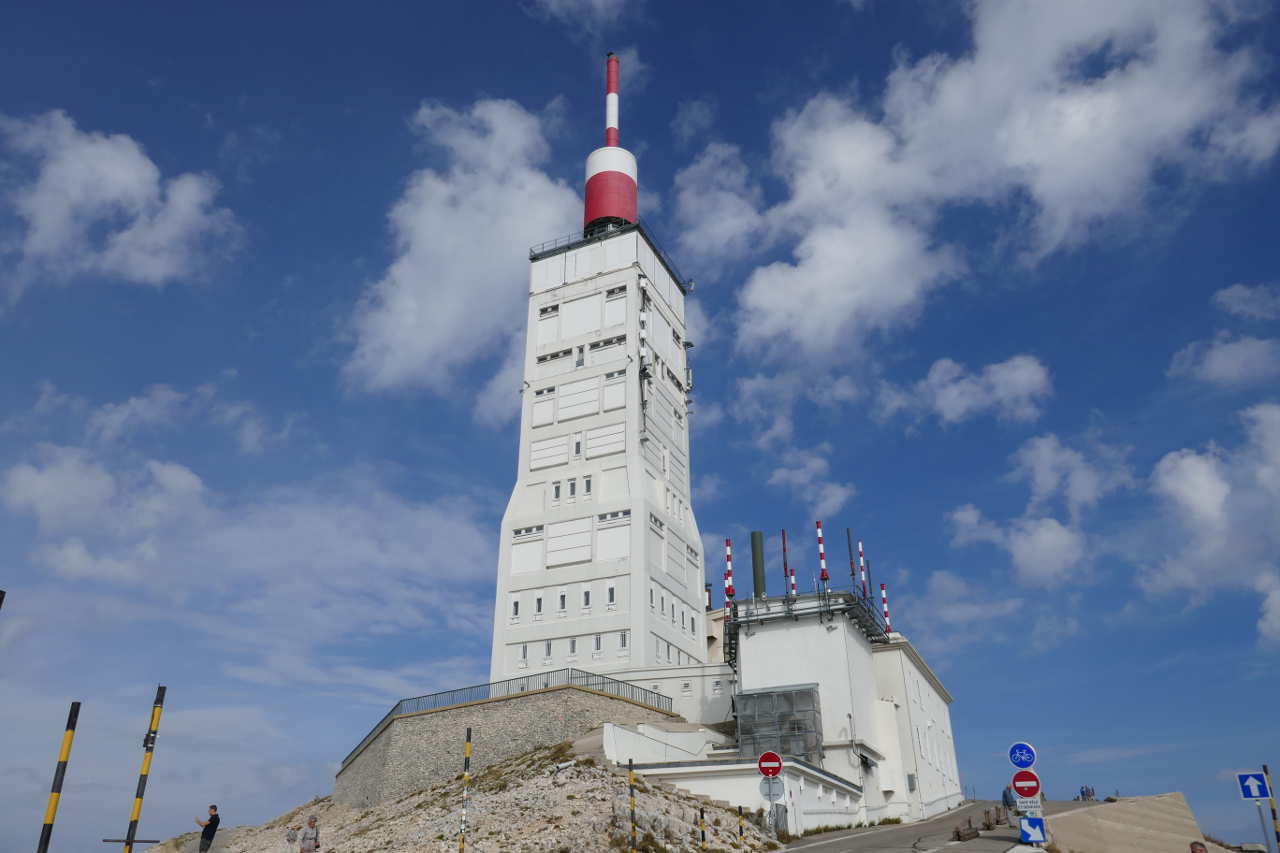 Three cars of people at The Tom Simpson memorial. Tom died here on the 1968 Tour de France. Cycling has issues now with drug taking atheletes and 50 years ago it was silly. Tom had taken a load of Amphetamines and died of a heart attack as result off heat stroke exhaustion and too much speed. RIP Tom. His grave is a pilgrimage for serious cyclists. 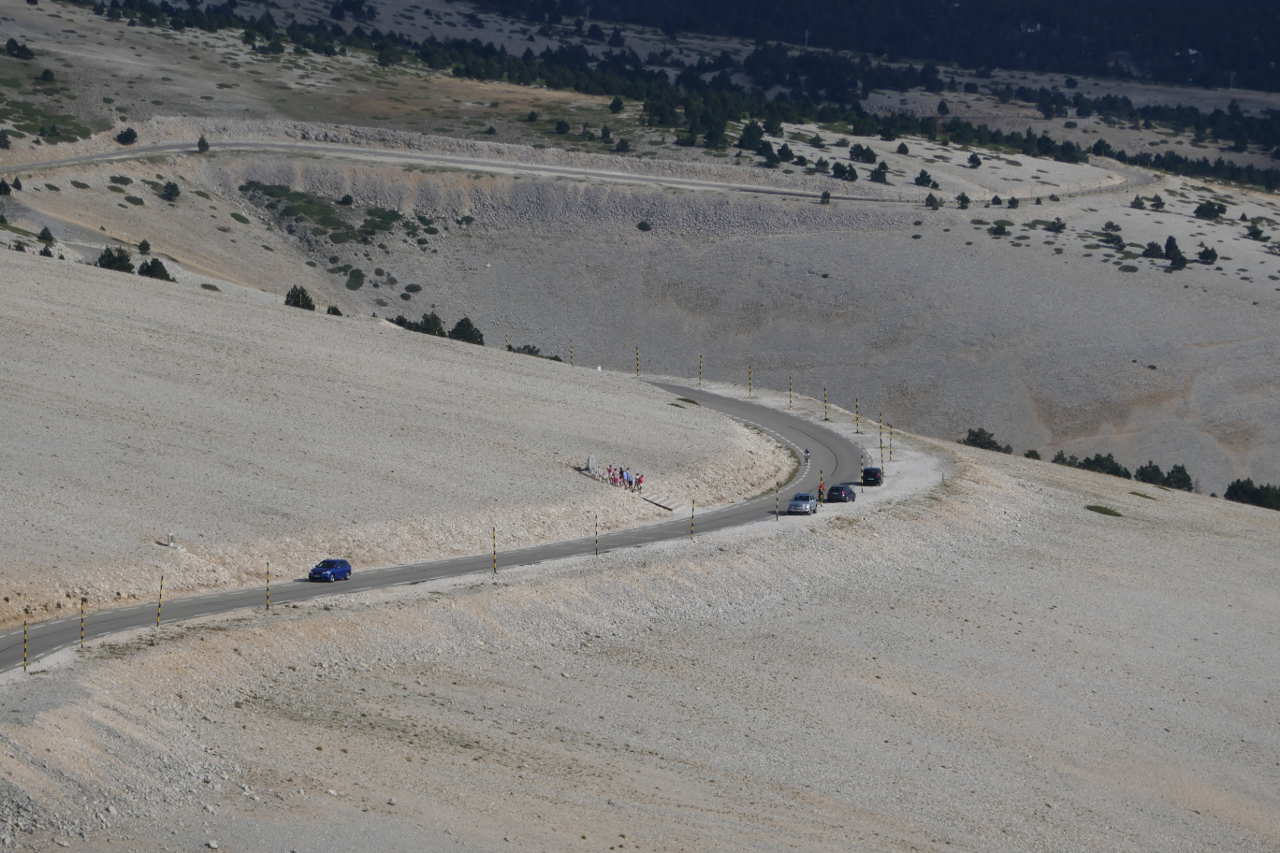 Not far from where I was staying. This has an easy track right to a fire lookout post at the summit. More antennas and dishes and more bleedin’ QRM. About S3 on 20m SSB.

I had a new vertical to try that covers 40/30/20 but had left an important part back at my sister’s QTH after setup tests the previous evening. So 20/30m CW with the FT817.

Now here’s a view. Dark clouds? Looks like it may thunder. Pic Saint-Loup F/PE-281 on the left and Montagne d’Hortus F/PE-309on the right. Done them both. The path of Montagne d’Hortus is challenging for us who don’t like exposure. 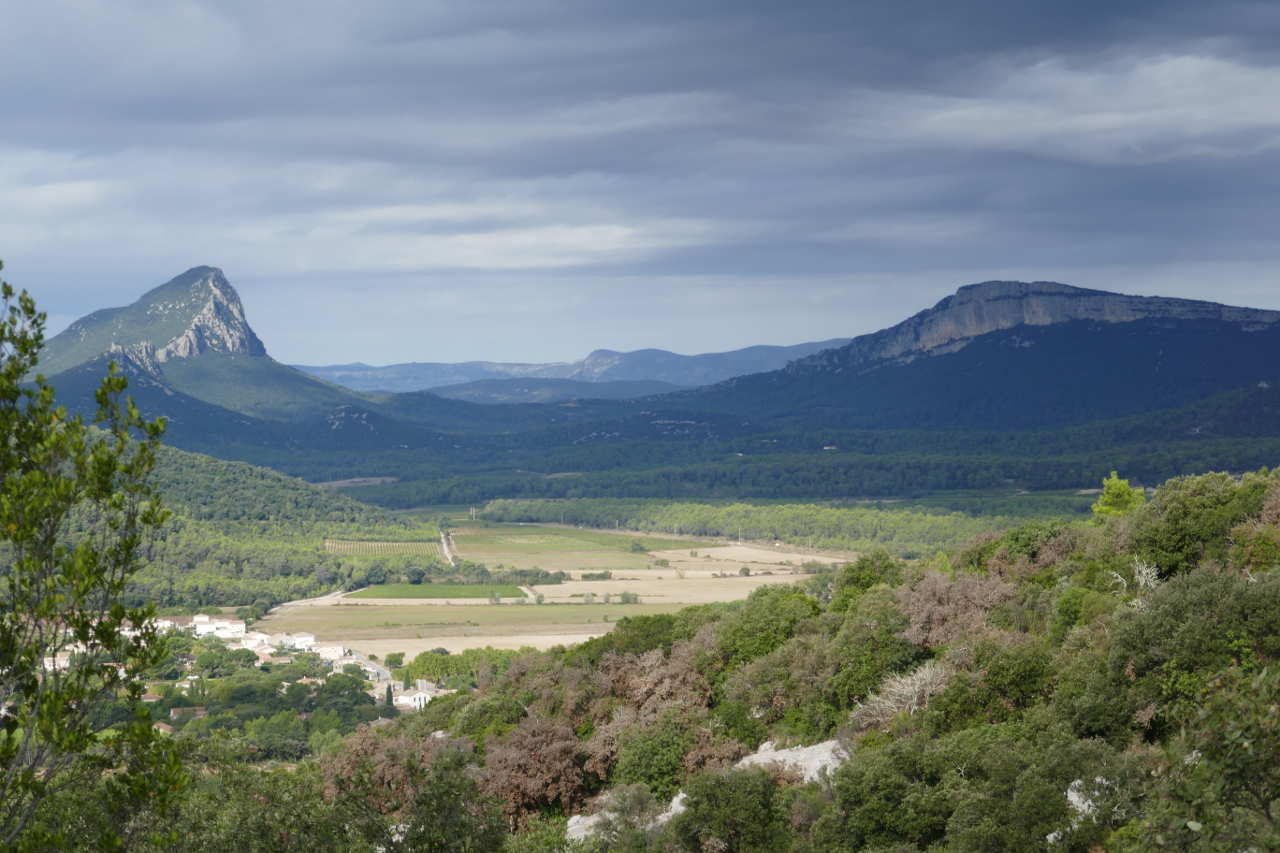 Normal skies are back, 1hr30 later. That’s more like it! 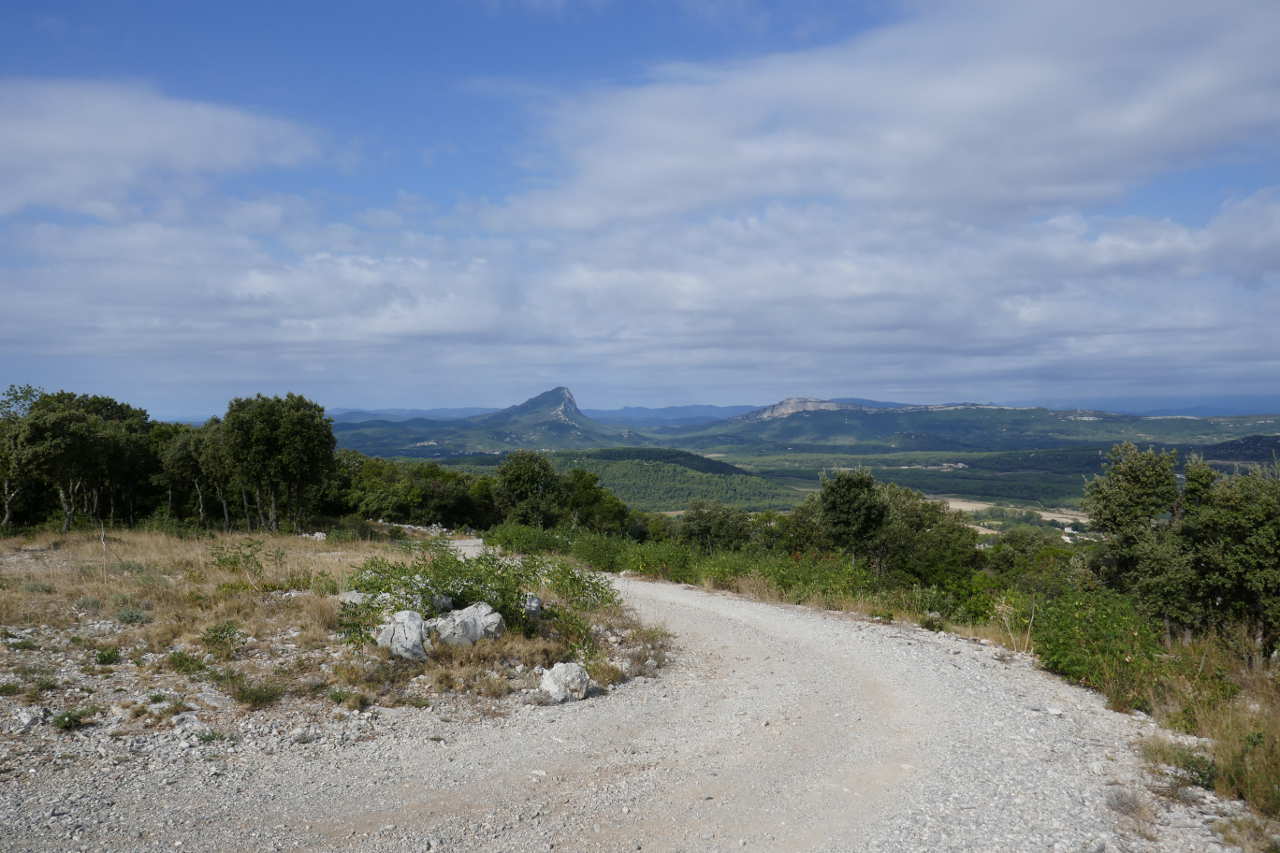 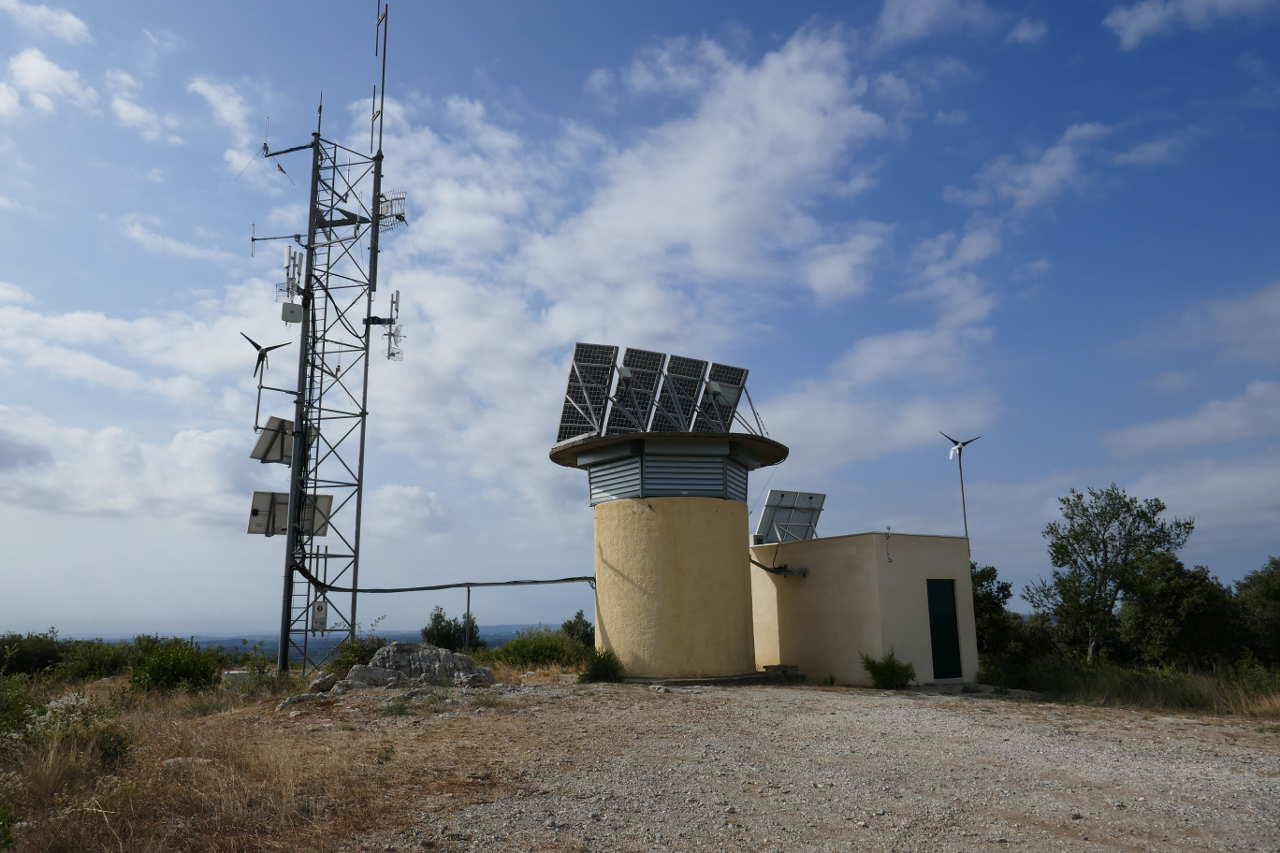 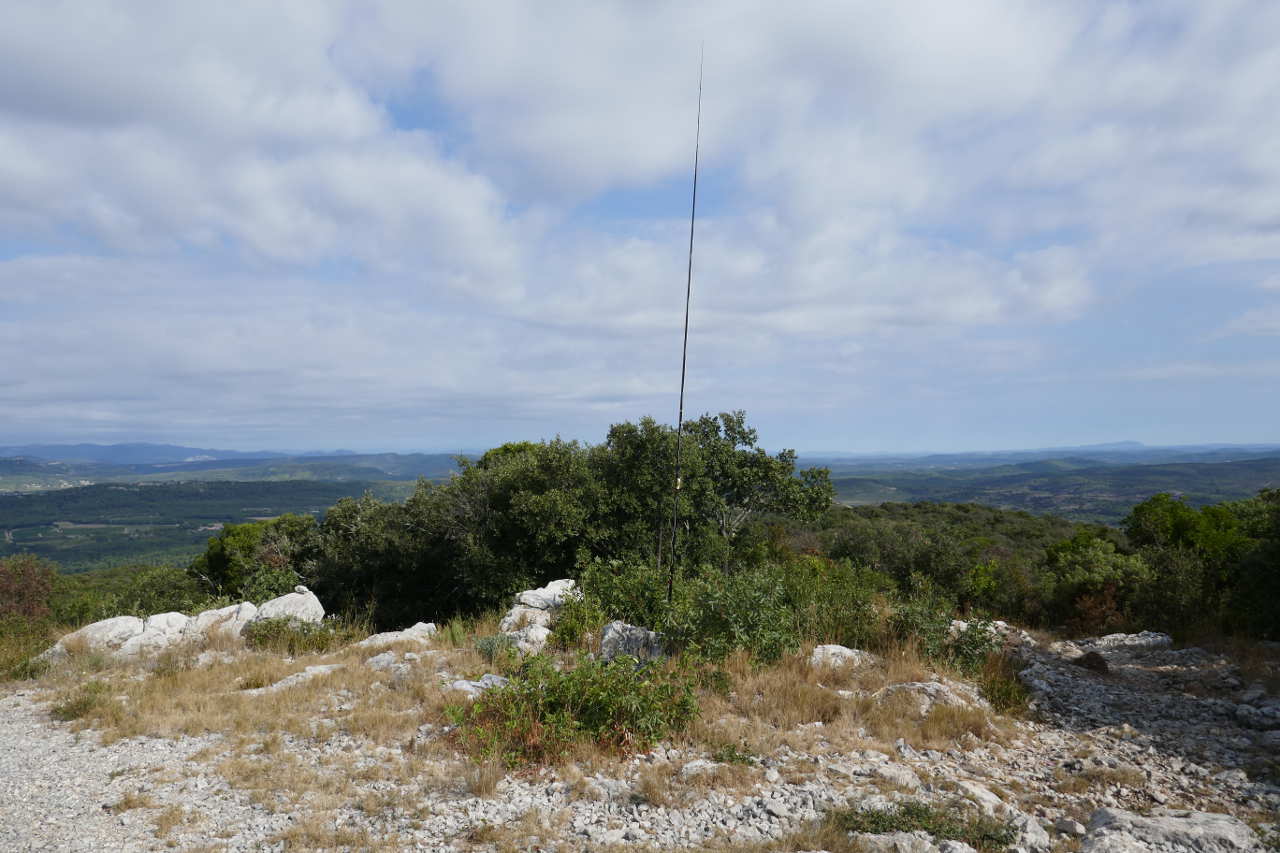 The Mediterranean is awfully close by. 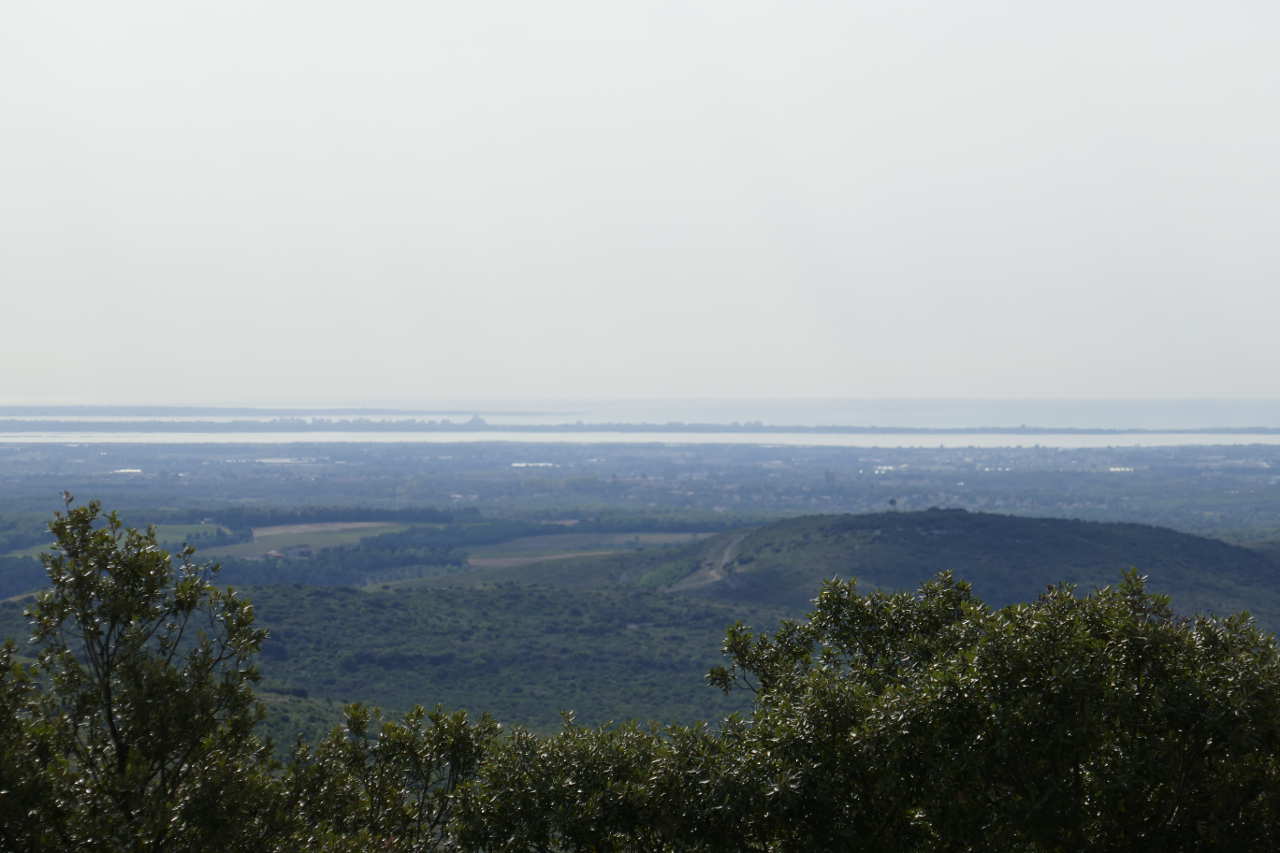 Happiness is a successful activation. The SOTA DXpedition hat gets another outing. 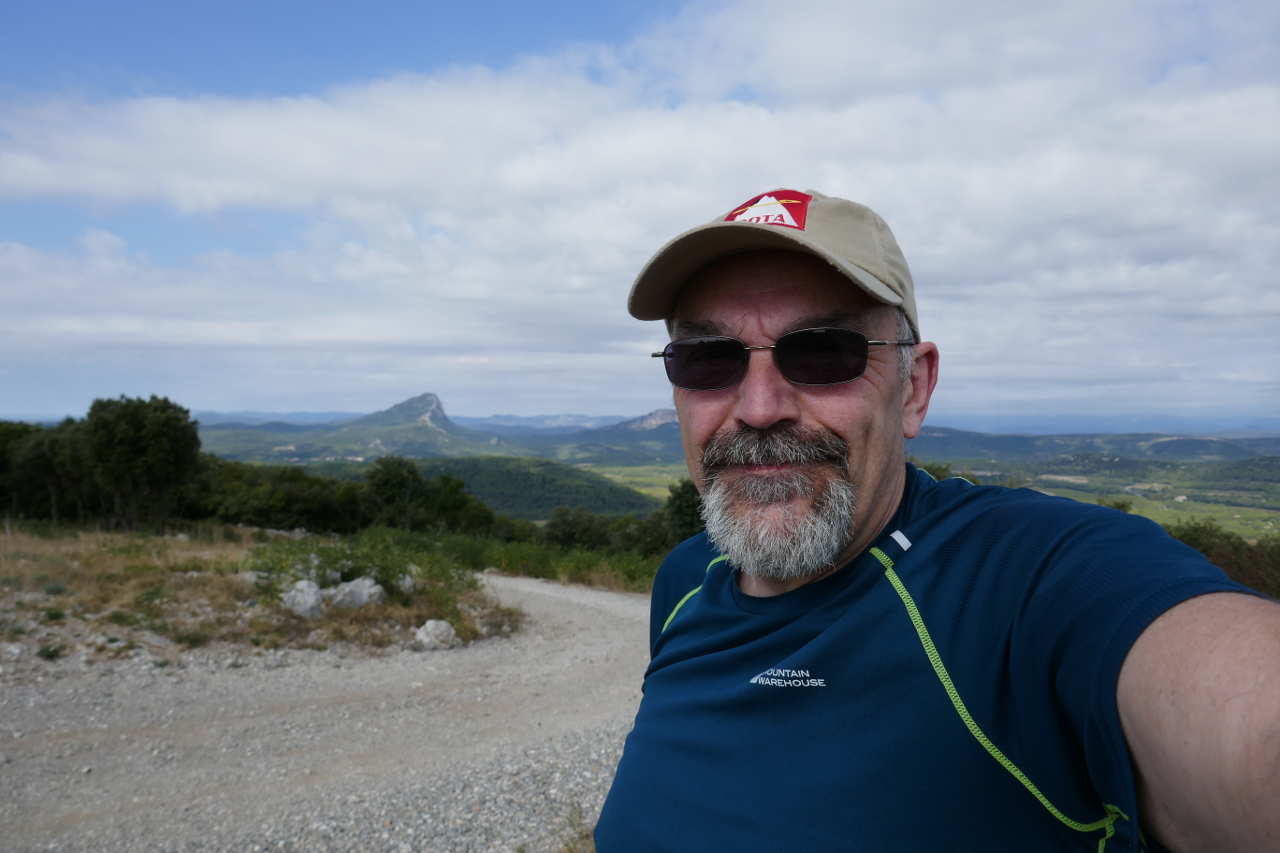 The longest walk and climb of the week. About 4.2km and 320m. It was 26C and boy did I sweat climbing this. An excellent track, you could drive an F1 car along it without problems. Some shade and unlimited Garrigue spiky vegetation. Wonderful but sweaty. 30/40m using the EFHW. It was a bit low so the SWR was rubbish on 20m but fine on the other bands.

Another blue sky turned up to 11. The EFHW runs up the pole for 4.5m then into the trees. I needed to keep out of the afternoon sun. 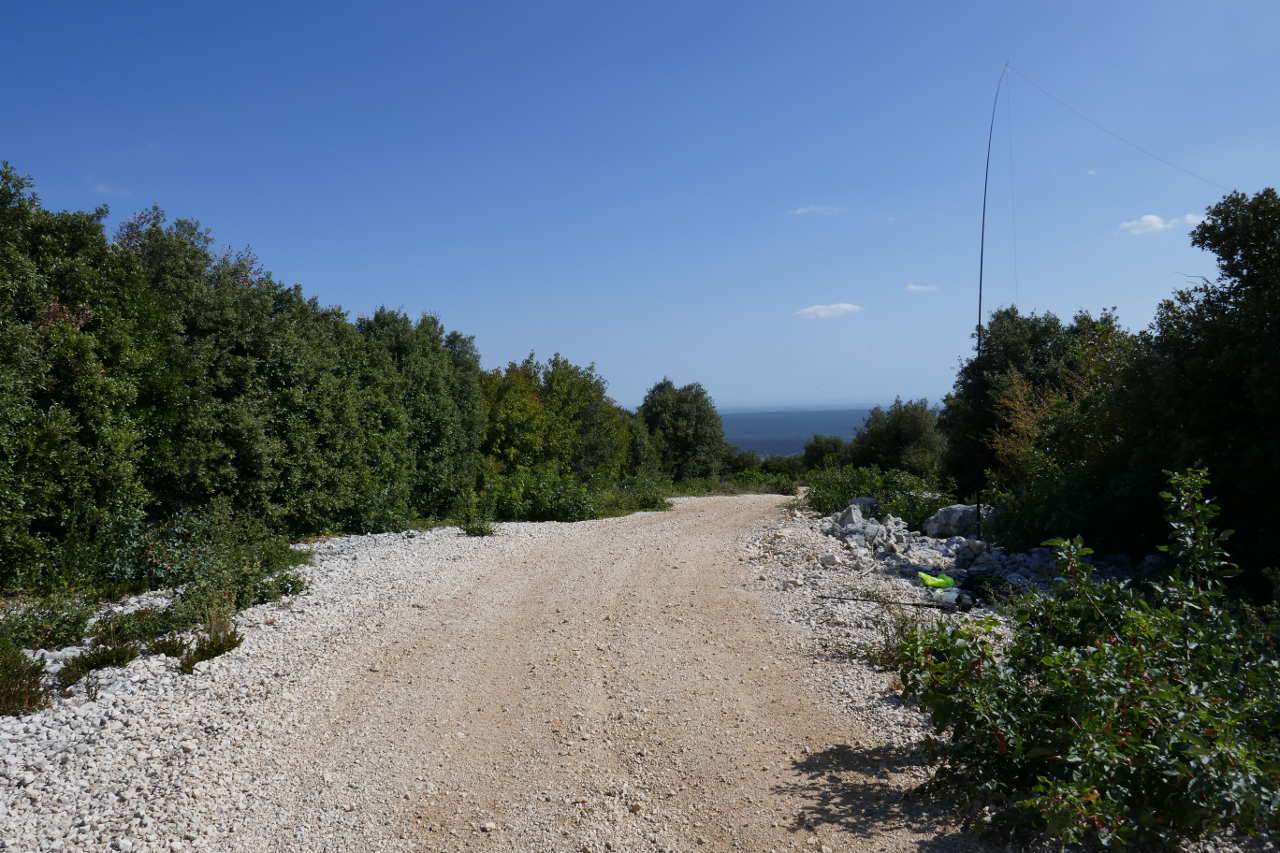 Phil G4OBK gave me this tip… “Cover the bottom section of your pole in thick heat shrink to protect it from rocks.” I’ve done this to 2 poles now and you can ram them into rocks, pile sharp rocks on them without damaging the pole. Brilliant idea that I didn’t think of. The rocks here are almost as sharp as the lava in Madeira/Canaries but much denser. 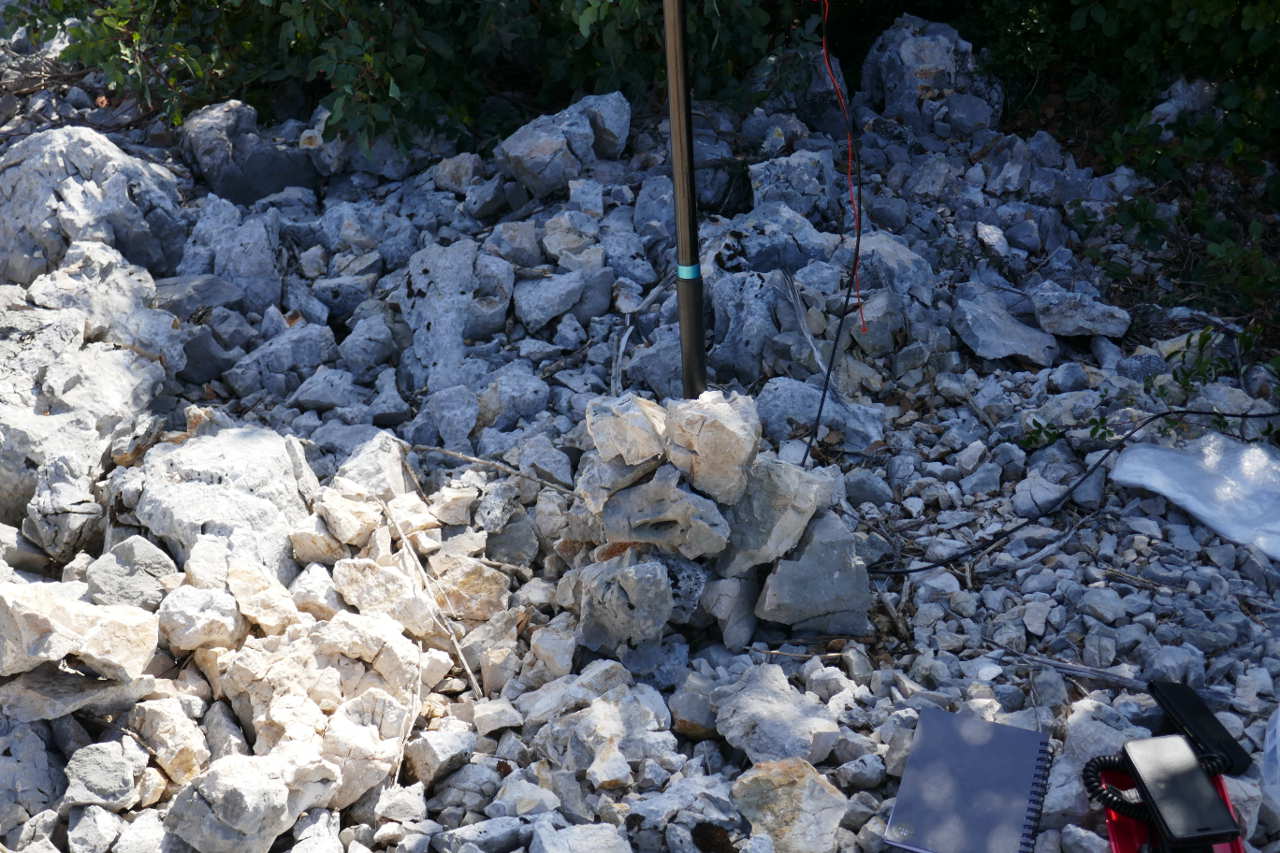 A view back to Montagne d’Hortus and Pic Saint Loupe. A really nice pair of summits (paths along cliff edges with 400m drops excepted) 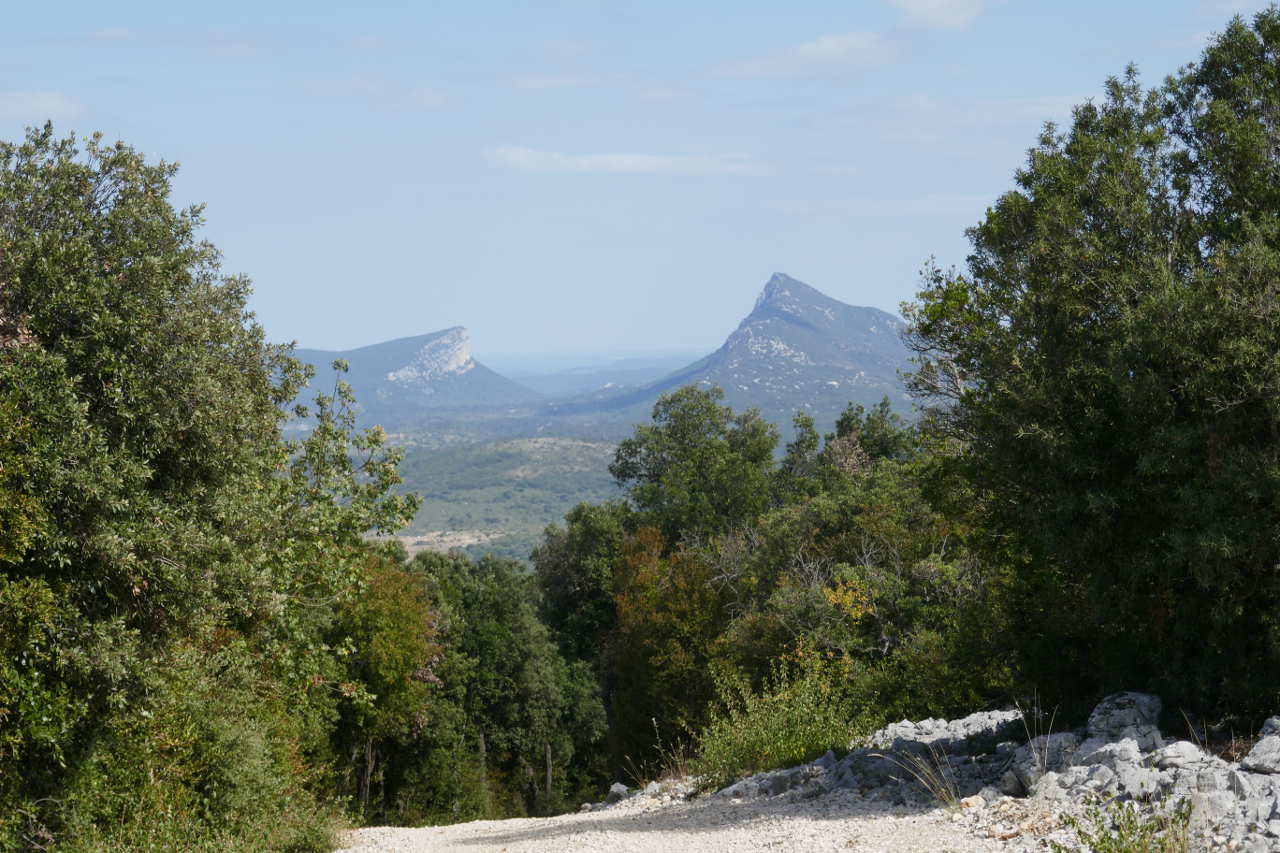 So 6 summits, 1 previously unactivated, a few hundred km driving, excellent if hot WX, my sister and husband’s unlimited hospitality, lovely French food and wine made this a great week. My French is maybe improving and everyone again was delighted some English fool was trying to speak French and not expecing them to speak English/ Loads of great smaller mountains and amazing countryside down here. Come to the Department du Gard and have a wonderful holiday. SOTAing in France is recommended.

Nice one Andy. I activated F/CR-007, Mont Ventoux six days later than you after driving down from the Lake Geneva area. The drive took longer than anticipated so it was early evening by the time we finally arrived. Still plenty of cyclists, many who looked quite ill and other visitors at the summit, but quiet enough and later we had the benefit of a lovely sunset. I agree the views are stunning. I set up my station very close to where you did, I think I had one end of the dipole on the barrier. Also had similar problems with QRM.

Agree this is an area well worth visiting.

Very picturesque. I enjoy your stories.