Last Monday morning I loaded some stuff into my car, drove round the corner to pick up a friend, drove a way down the road to another friend’s house, transferred all our stuff to his car, and headed for South Wales. We stopped at a couple of motorway service areas along the way, but our first serious stop was in a lay-by at the foot of Allt yr Esgair (SOTA GW/SW-023). We hiked to the top, and I spent about an hour activating the summit while my friends chatted and admired the view. 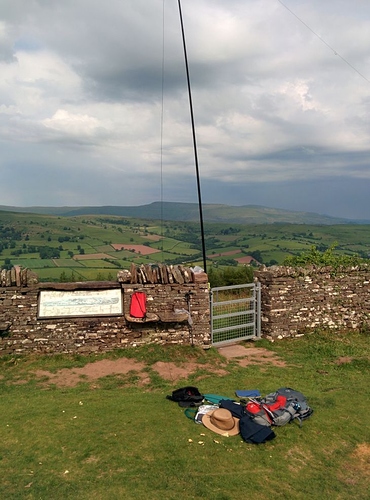 We packed up and headed down almost in time to avoid getting rained on, but the rain that did catch us wasn’t heavy. Our next stop was the Llyn-y-celyn youth hostel. We settled in, had a hostel supper, and then went for a walk a little way up Fan Frynych, getting back to the hostel as it was getting dark. 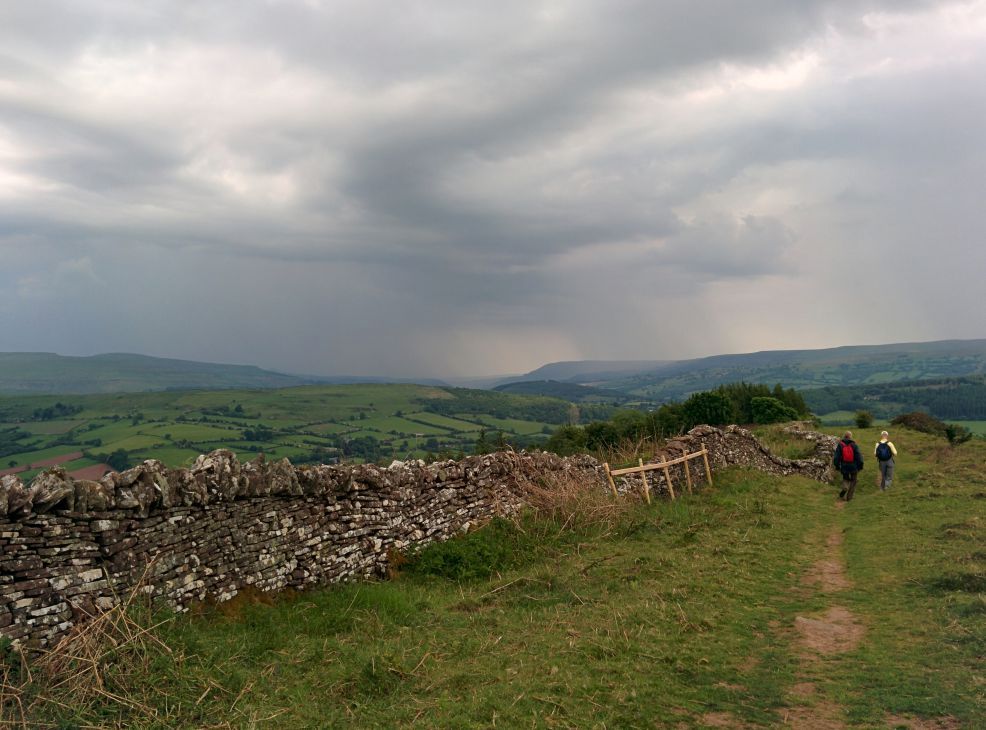 On Tuesday morning the forecast was for bad weather in the mountains, so after a hostel breakfast we drove to the nearby Mountain Centre and spent a few hours walking around the Daudraeth Illtyd Nature Reserve before returning to the Mountain Centre for a late lunch. Then we went into Brecon to buy some food for the morrow and to have a look around. The cathedral was open, so we spent a while in it. We also had a look at the end of the Monmouthshire and Brecon Canal. We had another hostel supper, and I spent a bit of the evening preparing kit for the following day. We wrapped up the evening with a game of Carcassonne: Hunters and Gatherers.

After a slightly earlier hostel breakfast on Wednesday morning we headed out on foot, initially up the Taff Trail to the Storey Arms, and then on the trail to Pen y Fan (SOTA GW/SW-001) via Y Gryn and Corn Du. 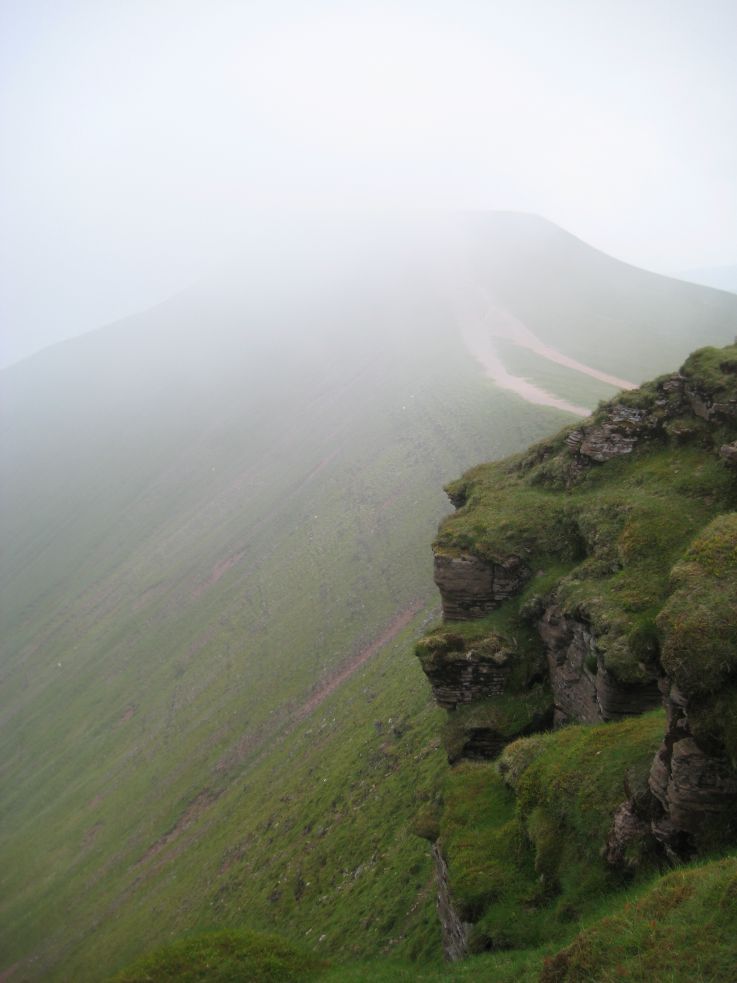 I spent a few hours there activating the summit (and answering questions from curious visitors) while my friends went further afield. I think they went as far as Cribyn. I’d just about finished packing up when they returned, and we walked back to the hostel. The weather was fine all day. In the evening we decided to head down to Tai’r Bull, and had dinner in the pub there. 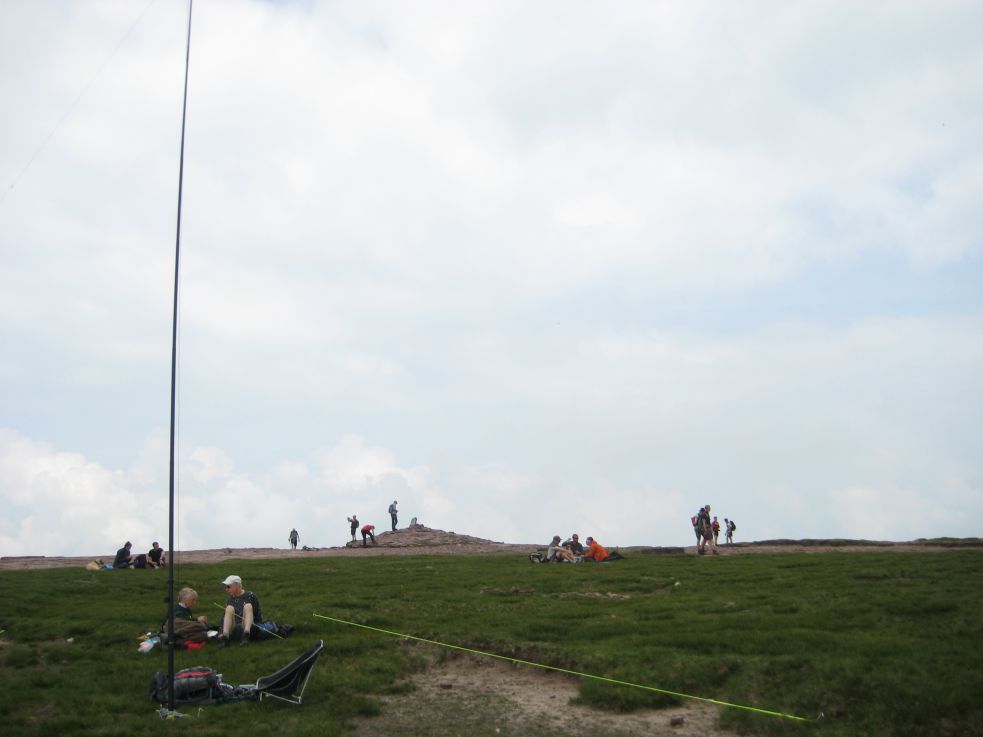 On Thursday morning we packed the car, checked out of the hostel, then headed for Porth yr ogof near Ystradfellte, and spent a few hours walking downstream from waterfall to waterfall. When we returned to the car park we found that it was now thoroughly crowded, mostly with parties of children being taken into the cave, so we headed back to Brecon, and had a snack lunch by the end of the canal. There followed a long drive to Oxford, where we met up with my friend’s son. He showed us around bits of his college, and then we had dinner in an Italian restaurant he favoured. After dinner we headed for home. I finally got home at about 10:30pm. 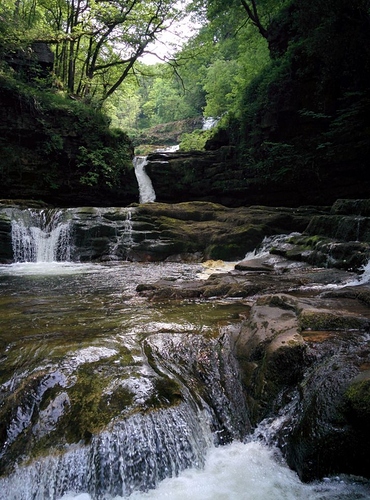 No serious drying-out exercises required, and plenty of fine scenery to appreciate.

My CW on Pen y Fan suffered somewhat from my weariness. Another time, I’ll make a point of starting with CW, so that I use it when I’m more alert, and switch to SSB for more relaxed/chatty contacts afterwards.

Also, I’ll be a bit more careful to ensure I do have self-spotting covered. There was no mobile coverage in the hostel, so one of the social spots was a hundred yards up-hill.

Even there, the data connectivity could only just about cope with simple chat, and wasn’t up to rendering SOTAwatch.

Solution from somewhere like GW/SW-001 (ie excellent VHF take-off) is simply call CQ SOTA on your 2m FM handheld, and as soon as you get a recognised chaser (won’t take long), just ask “Could you possibly spot me on 7.033 CW?”.

I’ll try to remember to turn my FM handheld on next time.