Currently I use a Yaesu 891 as my SOTA radio, after doing about 10 summits, I’m looking to slim down. Lighter radio and battery. I only operate SSB

The 2 radios I’m considering are the Xiegu G90 and the Yaesu 817. On paper the G90 seems like a better choice due to the increased power and tuner etc. However I know the 817 is a workhorse.

I guess my question is, is the the 817 still a good choice for low power consumption? Will 5w be sufficient on SSB or will I wish I got the G90 with 20w?

Typically I operate about about hour or so once I’ve reached the summit and mainly operate on 20/40m with EFHW antennas.

Thanks for any advice

There is no right answer only opinions.

For me, what I buy depends on price and future spares availability. If the price is cheap enough I am prepared to write off the cost if it fails.

There are plenty of reviews slating the G90 so play with one before you buy if that is your choice.

5W has seen me through two solar minimums on SSB first time and SSB/CW second time.

For me I need VHF/UHF so the G90 is a non-starter.

Hi AJ,
My first question is why change from the FT891? That’s a nice radio and although you may never use it portable at 100 watts out, it might be good to be able to run at a higher power (40 or 50w) for a short time when the bands are difficult.

If it is really a question of weight, then the fact that you can run the FT817/818 range using an internal battery is where the real weight saving is. The G90 won’t save you much weight on the battery as you will still need an external battery - a LiFePo battery is the normal choice. You might want to look at the G90’s little brother, the X5105 if you can still find one (MFJ?), which also runs 5 watts output with an internal battery (It’s Xiegu’s answer to the Elecraft KX3 but in a more basic and less sensitive form, at a lower price). It covers top-band through 6 metres and has a built-in ATU.

By the way, there are as many positive as negative reviews of the G90 (and probably most rigs). People don’t consider their needs well enough before buying the latest rig and are often disappointed that the rig doesn’t do something that it never said it did. So it’s important to really boil down what you need before making the move to a new (or new to you, second-hand) rig.

The FT817/818 is a good rig but an older design and you may be disappointed with its receiver performance when compared to your FT891.

Having 20 watts on a summit rather than 5 watts, does make a difference on SSB (I changed from an FT-817ND to a Xiegu X-108G (the G90 predecessor without the ATU) and while the increase in power does help getting contacts, it brings extra weight with the external battery).

So my advice is

Hi Ed, some great tips and advice. I’m trying to find the Current Draw on SSB on my 891. I have a feeling if I get a small 6-7ah battery and run 20w on SSB, I should be good for about an hour. If that holds be be true, I will stick to what I have. I think the 891 is an excellent radio and really enjoy it, it was just the longer hikes where I was feeling the weight after a while. But I was also carrying an almost 2kg battery. I can prob get a 5-7ah for half that weight. 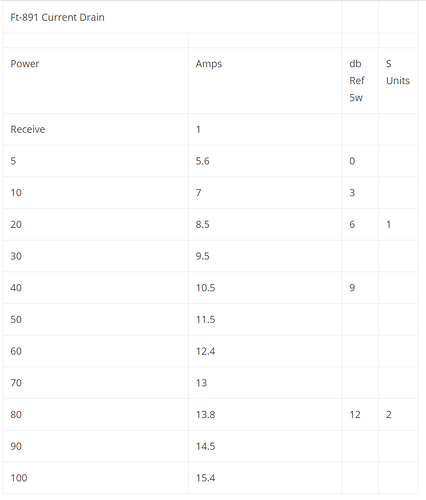 Unless you intend activating three summits and staying 2 hours at each one, a 5-6aH LiFePo should be a good balance between time and weight. I actually use the cheaper 4S LIPO batteries but then have to adjust the voltage down for the rig, so the LiFePO is the simpler option.

Well, the author of the article refers to running SSB, but whether this is a table he created or copied from somewhere else, I can’t say. He doesn’t say if this is CW/DIG/RTTY or SSB usage.

Perhaps send him and email and ask.

Ed,
Those numbers look close to what I have found on 5, 50 and 100 watts on my Yaesu FT-897D. I have run it at 20 watts on a 9amp LFP for a couple hours of light use and minimal drain on the battery. I will point out the price and weight difference between a 6A and 9A is not very large - mileage may vary with the mileage of the hike though.

Hi Howard,
AJ needs to know if that current consumption is average for SSB or “key down” for CW?

I believe the FT891 should take less power than an FT897D though.

Hi Ed,
I took my readings keying down on CW knowing SSB would not give the full picture. My exercise was for deciding which battery to get for my portable operations, not SOTA activations. Now I am tempted to buy an FT-891 just to find out…LOL.

I guess my question is, is the the 817 still a good choice for low power consumption? Will 5w be sufficient on SSB or will I wish I got the G90 with 20w?

The 817/818 is an aging design but it is extremely robust and will tolerate quite brutal treatment. It does not have some of the features of the G90 but has the 6m, 2m and 70cm bands, with all modes. The 817/8 comes with a battery box which will take eight AA size cells, mine has 2500 mAh NiMH cells in it, which suffices for over an hour of operation at 5 watts. The battery pack that Yaesu supplies is quite frankly a joke! If you don’t mind a bit of extra weight a 4 or 7 Ah lead acid gel battery will give you power for perhaps several activations. In fact I sometimes use a 7 Ah battery and an FT857D at 20 to 50 watts and it will provide power for a couple of activations in a day (perhaps more but my legs run out first!)

5 watts is sufficient for an activation, if you check out the activation reports you will find many reports from 817/818 users getting SSB contacts in double figures, and often quite surprising DX can be worked with efficient antennas. Certainly with a few sunspots helping you could work into Europe - with my 817ND I have worked into the USA on 20m SSB with a ground plane antenna. The antenna is the key - it is nice to have a tuner, external or built in, but nicer not to need it!

For higher power activation’s without excessive walk ins, I usually use my FT-857 with a LiFePO4 8.4Ah battery - battery is just on 1kg and easily lasts an hour activation’s at 50-70W. Of late have also used the smaller 4200mAh LiFePO4. Both batteries sourced from Hobbyking (purveyor of RC toys of all types). My 817 (with a 3S 2500mAh LiPo) really only gets used these days as a microwave IF or for the longer walk ins where I get more conscious of the weight. For drive to summits, my radio of choice has been the IC-7300 given its better receiver, spectrum scope and better ergonomics. I usually have a 20Ah battery for that so I can run QRO for more sustained periods of time.
I also have a recently acquired IC-705 which will probably replace the 817 for most of the longer walk in summits, but until I have a good solution for higher power, unlikely to replace the 857 or 7300.

There is currently a long thread about the G90 on the Zed with people talking about their experience of it:

Just received my March QST today and the Xiegu G90 review is very positive. So, I ordered one just now. Like I need another HF rig.:p But I use my...

Are the consumption figures the same for SSB? Those figures suggest the PA is running 70% efficiency so it could be the bias has been changed for CW vs. SSB operation. Or I’ve missed something!

Just my thoughts on the G90.
I had one for a short time last year, used it for numerous winter activations. I was hoping it would replace my KX2 amp combination until the conditions got better. For around here for consistent contacts 20 watts seems to be the required amount.
From my experience anything below -15C it wanted to be heated. At -18C it was a frozen brick requiring body heat for it to work. I would say for a fair weather activator it is a good radio, colder temps be prepared.

How much does the FT-891 weigh? I’m considering a new rig for portable/SOTA operations. I already have an IC-706, but it is a bit heavy.

Approx. 2kg. I use it quite often on shorter hikes with a 12Ah LiFePo battery which is another 2 kg.

I have a g90, an 818 and a replica of a McHf (They not sent it mounted to EU when I buyed).
I’ve used the g90 for quite some time because have a great power and great great matcher, but its handicap is its weight. At this time I use the McHf type, very very low consumption and have the approximate power to the g90 but much lighter. With only 5Ah Gel batt I cover a single sota day. I leave the solar panels at home now. Anyway G90 have great low consumption in RX. I use the 818 just for most extreme or hard situations.
The difference between 6w and 15 or 20 is a lot, and you gain a lot of time on the summits,But this is just my personal opinion

Hi Fred,
You’re asking the wrong person - it’s AJ who has the FT891 and considering changing it not me.

BUT… Look what just appeared on QR Zed: