I recently bought a folding 3 element 70cm Yagi. I didn’t buy it for SOTA use but chasing high altitude balloons which I occasionally launch.

However, a search on here finds a few references to 70cm although I haven’t found a lot of detail so far.

As the time approaches when we in G region may be allowed out (Monday?) the opportunity to wave my new antenna from the top of a hillock somewhere will come.

From what I’ve seen 70cm FM and I assume vertically polarized is what has been used for SOTA.

Would there be anyone able to hear me (from Devon) if I gave it a go?

It’s a quiet band. An effective way to get 70cms QSOs is to ask people you are working on 2m to QSY if they can. You’ll be surprised how well things can then work.

You might struggle with 70cm from the summits down in S W England other than to perhaps work Don G0RQL. I used to regularly run 25w of SSB to a 6 or 8 element yagi and there were a good group of followers on the mode, but that was more than 10 years ago. The interest in 70cm has always has been patchy. If you get up to activate summits in the Welsh Borders you should stand a better chance and perhaps even better in North Wales and northern England. As Andy says, announce you have 70cm capability when working people on 2m and you will hopefully get some interest.

Is that an RSGB event?

Thank you again. :). I’ve just been looking at it on the RSGB website. I’ve never done any contesting but I might try and listen next week. If anyone is transmitting to the west of me there is a chance I might hear them from home.

I second what Tom said about giving it a go during the 70cm FMAC / UKAC contests. Admittedly in a pretty good location, but I did Worcestershire Beacon during the July FMAC last year and got 20-odd contacts from a 5w handheld and roll up J-pole with some lack lustre operating skills.
It’s dead easy to dive into the FMAC contests - you just need your Maidenhead locator and a sequential serial number for the exchange.

you just need your Maidenhead locator and a sequential serial number for the exchange.

We used to have something called “Tuesday night is SOTA night” - a name coined by Richard @g3cwi and an event devised by Paul @G4MD. For a while, it was a popular thing for several activators to get out on their local SOTA summit during the summer evenings for S2S contacts.

They became known as “SOTA Fun Evenings”, and ran concurrently with the RSGB VHF/UHF activity contest nights - a smart move as it guaranteed activity levels even when the number of activators taking part was thin on the ground. It would be good to see more participation from SOTA activators again this year as the nights get lighter.

That might be an interesting thread on its own

ALSO give FM a go on hoz as well you be surprised how many peoples don’t run vert AND YOUR signals will reach further.

Or be lazy like me and go 45 degree slant polarised and accept the 3dB (half an S point) loss.

Looks lousy from an aesthetic perspective!

What about others that are at 45 degrees though?

What others? I’ve never worked anyone that has used slant polarisation on any VHF/UHF band - it just isn’t done. Imagine having a slant yagi on your mast at home. It just looks plain wrong, but it doesn’t matter for a portable installation… other than your photos look naff. 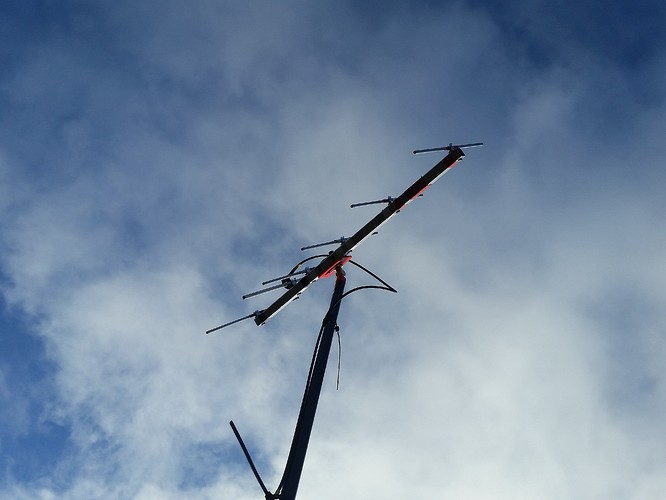 If your trend takes off Gerald, there may be a whole army of 45 degree slanters out there. With the same problem as the V-pol / H-pol stations - some of them will be 90 degrees out for you!

With the same problem as the V-pol / H-pol stations - some of them will be 90 degrees out for you!

But you would be able to work three out of four stations (assuming an equal distribution of polarisation choice) and even those opposite to you would have to be exactly 90 degrees out to null the signal.
When there are that many people active, it will be less important if you miss a few!

I tried Gerald’s idea and used slant pol during the 70cm challenge last year, and worked 35 on ssb and 1 on cw, running 5w from ft 817.
That was during rsgb vhf field day of course, though no /p stations were allowed in the contest that year.

Slant pol is easy to do, and might gain a few contacts in the current state of activity…

If your trend takes off Gerald…

Pigs might fly… whenever have I set a trend? I just see it as an extra string to my bow. It is useful if I am operating in an area where I might work stations on SSB and FM.