On the whole, I (kind-of) like to think of myself as a VHF+ activator, and from time to time I have a dabble on 70cm, either with the 8 ele yagi, or just on the 5/8 over 5/8 whip. The whip generally only produces one or two QSOs and they tend to be from people who saw the alert, and occasionally the beam produces slightly better results (it always makes me chuckle when someone says “I thought I’d have a quick flick around on 70 'cos no one ever uses it” just as I call CQ =).

I’ve heard heroic tales of chasers racking up big scores on cems alone and its heartening. Personally, I find 70cm an interesting band, and like any other, it has its own pleasing little quirks. My question is, is anyone else interested? Nowadays (thanks to the advent of the '817 =) I have the capability to run 70cm SSB as well as FM, and cems SSB certainly appeals to me (tho I never dare try it for fear of freezing to death). I intend to keep running cems from the hills (I’m one of the “use it or lose it” brigade), but if anyone has any preferences regarding modes, polarisation, headings etc then I’d be very glad to hear from you.

Over Christmas I made up a 6 ele for 70cm - much along the lines of my 2m one - and I did have a few QSOs on SSB but I’ve got out of the habit of taking it along. When the WX improves and there’s less time pressure on the summits, I want to try again. I’d be delighted to give it a go.

In reply to 2E0BYA:
Hi Dave,I have always had interest in vhf/uhf,problem is that now I reside in Devon (since 1988)I dont hear the the amount of activity(all beams north and east,unless ops remember I am here) I used to prior when I was near Heathrow so unless I see vhf/uhf spotted I dont happen to flick through as you call cq.If you cosider 2/70 do let me know and If I am available will look your way.
I do like to work the activators spotted that I can hear on vhf/uhf and have worked mw0rar/p mw3sfn/p g1zjq/p gw4erp/p gw3rmd/p g4blh/p on vhf in the last few days and others before.
Unfortuneatly in the last few years we have seen a decline in the use of vhf/uhf and we don’t want to loose it.73.Don G0RQL.IO70UV.

In reply to 2E0BYA:
Hi Dave, I have a small 70cms logperiodic which I sometimes take along on activations. I must admit I only take it if theres a good chance of a lift. For example we activated Fair Snape Fell on Christmas eve & on the drive in I was listening to Continental VHF FM stations on the car radio. Once on top Mike G4BLHs first call on his handy / rubber duck resulted in a DL contact. Once I set up my “beam”

I had lots of DL & even SP stations on 70cms SSB. Look out for activations from Rick GW0VMW as he uses a quadruple quad for 70cms, the design of which can be found on his website.

Like Richard I have built a 6 element and have taken it out on several occasions, but generally there are few chasers interested in this band. I do have a 50w linear which the 817 will drive to 25 watts output, but it is more weight to carry with no guaranteed return. Maybe like Richard says, in the summer when there is time to laze in the sunshine…

Time to dig those 6-el beams out folks and head up your local SOTA summit! It’s SOTA Fun Evening, but also the 70cm RSGB Activity Contest from 8pm to 10.30pm local. I can only operate until just before 9pm myself, but daylight is lasting pretty much until 10pm now for those who want to squeeze extra time out of the evening.

For those who don’t know, the exchange is simply callsign/report/serial number/Maidenhead locator, and you can enter your contest log online at http://vhfcc.org afterwards. It’s a fairly decent interface on there, so contest logs can be entered rapidly and easily, just as the SOTA activation logs can on our own Database.

Hope to speak to you tomorrow evening.

In reply to M1EYP:
I will be listening Tom,did call you on the last 70cms activity as I was hearing you in N.DEVON IO70UV a good multy.73 Don.

Any hopes I had of being competitive in any of the main RSGB UKAC or FMAC series in 2018 evaporated as my touring schedule intensified! Nonetheless, I still enjoy taking part, and intend to do so this evening.

I.ll be a listening this evening.
Got the Quagi made up from 8 to 15 elements now and me antenna rotation unit is operational now also. 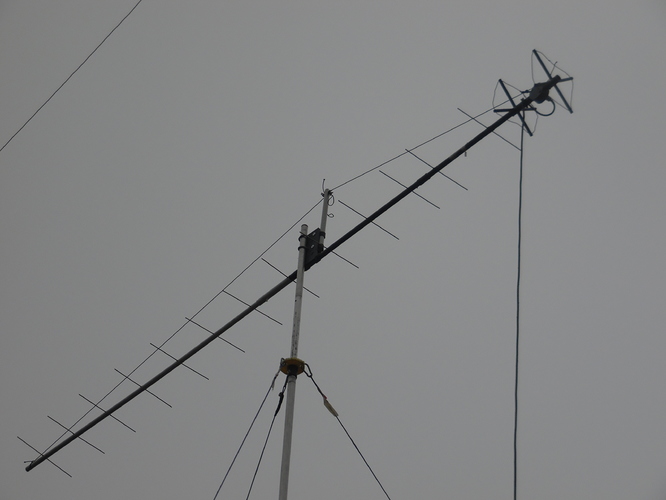 70cm unplanned contacts here are hard to come by when out in the “woods” but from summits closer to urban centers I have made the occasional 70cm contact.

The trick here at least is to time an activation with the 8-10am daily local activity on 144.205 and lure people to 70cm, or time things with the ARRL VHF/UHF contest. This past weekend I got a bunch through 1.2ghz from W2/NJ-009.

I have discovered the joys of the tiny SG labs transverters (http://www.sg-lab.com/amateur.html) which are a fraction the size of the 817, and my hope is to take them along with me on regular activations for those delightful completely unexpected contacts on the upper bands. A 1.2ghz high gain yagi is tiny and light along with a transverter…

Hi Tom, not good conditions (wx) here tonight. I called on 70cm FM, but heard narry a peep even tuning around. In the end I had 4 lovely chatty contacts on 2m and decided not to tarry for a SSB attempt due to the wind, mist and threatening rain. Sorry but G/SE doesn’t seem to be strong on 70

Shame you didn’t hang around for the SSB Andy, I’m sure we’d have made S2S on SSB. I did make S2S with Matt 2E0MDJ/P who was on Cleeve Hill G/CE-001. I must admit though, I myself packed up early just after 10pm, as I was cold and bored, and it was starting to rain, and there was hardly anything of interest active on the band.

Anyone else planning activating on 70cm this evening?

Hope you didn’t get blown off.
Could only elevate my mast just above the roofline - and conditions were AWFUL

Yeah, the newer version of the SOTABEAMS rotating guying kit which anchors over 3m ALL was crucial in that wind. The older version where the sleeve sat at 1m may have struggled.

The 6-el 70cm beam is from the discontinued SB270, so that is really lightweight and doesn’t “catch the wind” like larger and heavier beams do.

So the only real problem encountered due to the wind was me getting cold, which combined with the bobbins conditions to which you allude, contributed to my unusual early finish.

I think I may be in for another early finish again tonight. The weather forecast has improved, and is now only rated as pretty bobbins, as opposed to the absolutely bobbins it was earlier in the day.

Scratch that - it’s still horrendous - I was looking at the forecast for Macclesfield itself just now, not the one I usually check for The Cloud (The Roaches).

So your best chance of chaser points is on 70cm FM before 8pm!

Went QRT at 1912z much earlier than even my most pessimistic scenario. This was due to a crocodile clip coming away in my hand as I was setting up, rendering my feeder next to useless. In nice calm conditions, I would have attempted to cobble a makeshift repair. But it was cold, windy and forecast to get much worse through the evening. I couldn’t be bothered.

It was annoying and frustrating as this patch cable had been repaired/remade very recently, and tested. I’ve no idea how it could have deteriorated so quickly; it hasn’t come in for any “punishment” of which I am aware anyway.

So I switched on the handheld, made seven QSOs in the 70cm FMAC, then descended.

At least the clip that came off is a nice new clean clip with a handy blob of solder on it in the right place. Should be an easy quick fix. That’s what I was thinking just before it slipped out of my fingers and down a crocodile clip sized hole next to my handbrake, never to be seen again.

I’m minded not to buy a lottery ticket.