I’ve just got a KX3 which will allow me to use 60m for the first with my NOV. Are there certain freqs in use by SOTA?

In reply to G4ZHI:
…and the band utilisation chart linked from http://homepage.ntlworld.com/wadei/UK_60m_band_utilization.htm might also be useful.

Are there certain freqs in use by SOTA?

Spot on. Sadly 5.3985 seems to have become a favourite waffle spot

Third choice for me is 5.3715, though that often seems to be noisier than the others.

Welcome to 60m and enjoy, it is a wonderful band for SOTA!

In reply to G8ADD:
Thanks everyone for this. Most helpful. I shall look forward to activating 60m!

Igor - thanks very much for the details of your antenna. I shall get Google translate to get to work on it!

Having moved into my new shack in August last year saw my main computer more integrated with my radio equipment which allowed me to sit working on my various computer related tasks whilst monitoring ‘the bands’. Whilst working away I tend to listen to 145.500 and 5.3985 - the S20 of 60M? without the QSY (and I have to admit I am one who sits and has a chat on the freq - but in the early days I did ask my fellow amateur to QSY to 403, 371, 366 etc to try and establish the procedure we adopted on 2M - without much success

As 398 is fairly busy during the day, what ideally I’d like to see on 60 is to have a dedicated SOTA calling frequency CW or SSB (channel) with a QSY to a working channel. Any thoughts?

I agree that would be very nice, Jack, but nowadays every preferred SSB channel can be pretty busy - I tuned the band yesterday afternoon and found seven UK ragchews and a couple of German ragchews - plus some CW and a strong digital signal. It comes down to looking for an empty channel and hoping that somebody finds you if it isn’t one of the popular old “F” channels.

This is where it gets difficult, Mike. We recently had a thread about our bandplan urging us to avoid your limited access for inter-UK contacts. If I call CQ SOTA I would expect mainly UK calls and it would be unfair to take up one of a limited number of channels in your section of the band - especially as we do not have access to a part of your allocation. The answer IMHO, is to work the callers on a channel outside your allocation and finish on the band by calling again in the part of your allocation that we can access - if there is a free channel! Alternatively announce that you will tune split.

Oh heavens Jack NO! There are too few freq’s for a calling channel, they all have to be used to the full on a first come first served basis We have, effectively, lost 5.355 so we are down one I was jammed on there for calling CQ! Ragchewing and sota … there is space for both, an average qso is usually around 20mins, the sota op on there this morning was much the same. We all just have to get along, in fact considering the few “channels” it works pretty well.
73 Robert GM4GUF

Where I’m really coming from is a Chaser point of view, in that like 145.500 (S20) I can sit and monitor and if I am interested I’ll answer the call or let someone else work the station by QSY’ing and leaving 500 quiet. Unfortunately 398 never evolved like that. So whilst working away I am either distracted or I just turn the volume down.

Now this is a pretty selfish approach from my part, but my main raison d’être in the hobby these days is SOTA. So I am primarily interested in Activators or indeed chats about SOTA in general.

So it would be great if we had a frequency that I could leave the rig on knowing that primarily the calls would be of a SOTA nature with a possible QSY - or indeed a proper Calling Channel for 60 in general. I think there are sufficient channels/frequencies about to accommodate this - surely?

Worked eight chasers today on 5w SSB from DM/BW-484 - I chose a frequency that passed both in the UK bandlets and the WRC15 IARU band - 5.355MHz.

This may be an opportunity for SOTA operators to work RAF Air Cadets. You are invited to do so.

I chose a frequency that passed both in the UK bandlets and the WRC15 IARU band - 5.355MHz.

And by using this frequency on USB, you caused severe QRM to JT65 users - especially in the UK - who customarily operate between 5.356 and 5.358 MHz. 5.358 MHz is the upper edge of our bandlet, so we cannot go higher.

Please read the footnote of the latest RSGB plan - UK Ops are requested not to use the overlapping section with the International WRC15 Band for local UK calls.

This is a mess and the sooner that Ofcom issue the WRC15 band IN ADDITION to the existing frequencies and the RSGB UK Only bandplan is changed to fit, the better.

The RSGB page actually states ALL MODES for 5354-5358KHz - but this page doesn’t mention digital modes at all in the chart. 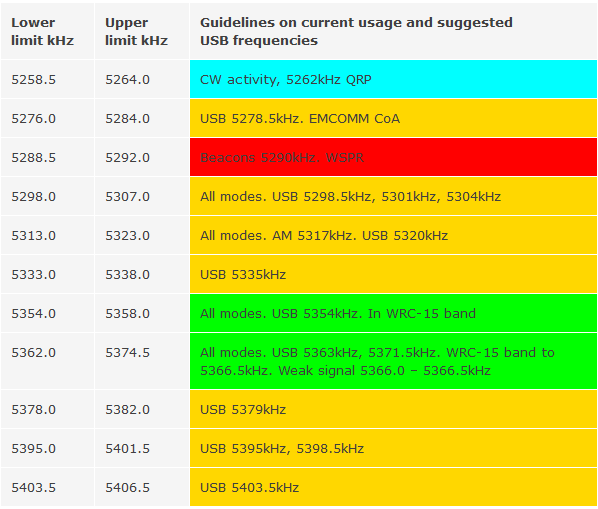 I know I have seen in a spreadsheet/PDF from the RSGB a plan that specifically lists digital modes and these are in another Bandlet that overlaps with WRC15 - that problem could be resolved by moving the digital modes section up to the top of the bandlet that it’s currently taking the bottom half of and therefore out of the overlapping area with WRC15.

Of course it is totally valid to run digital modes or CW or SSB in the WRC15 bandplan “all modes” section, when communication outside of the UK is wished for.

Like I said, it’s a mess and will stay that way until the whole of the WRC15 band is also allocated to UK amateurs.

UPDATE
OK, I found that other data modes segment - it’s specified in the band plan document and indeed printed in this month’s RadCom magazine - page 38 second column.
5.362 - 5.370 - Digital activity in the UK.
Lower in the same text, footnote 4 states “Contacts within the UK should avoid the WRC15 allocation if possible.”

That “if possible” is superfluous text - if the primay user wanted to use any 60m frequency that you were operating on, you would move, so there is no valid reason that using another frequency is not possible.

In any case, these two lines in the same document are in conflict with each other - one says a range of frequencies that overlaps with the WRC15 frequencies should be used for UK comms (digital) and the other line says to avoid UK contacts on WRC15 frequencies!! - I guess someone missed this error in validating the RSGB Bandplan 2017 before releasing it!
However this problem is easily resolved by allocating 5,366.5 - 5,374.5 as the UK digital modes area. In fact for weak signal/narrow bandwidth digital modes such as JT65, 5366-5366.5 could be assigned as well and be 100% in-line with the IARU band plan.

As more and more countries get the 15KHz WRC15 band, there will be the need for communication between them and the UK, so this issue is important. It’s a shame that more time wasn’t spent on the recently released RSGB Band Plan - but then again, they could be thinking that 60m in the band plan will have to change when the UK get the 5351.5 to 5366.5 KHz band!!

If we want to set a “standard” for SOTA interworking between WRC15 and UK stations, I’m happy to take your suggestion of 5354 rather than 5355 (to avoid some of the JT comms). It’s probably better to go with 5362 rather than 5363 as the second option to avoid being too close to the weak signals area in the IARU Band Plan.

The RSGB page actually states ALL MODES for 5354-5358KHz - but this page doesn’t mention Digital modes at all in the chart.

The section of RSGB bandplan you quoted gives exactly two USB frequencies within the WRC15/UK overlapping allocations, one at 5.354 MHz and one at 5.363 MHz. The old “UK 60m BAND UTILIZATION CHART” displayed things a bit more clearly, but only gave a single USB frequency within the overlap zone. I figure that 5.354 MHz is probably the only sensible USB frequecy that fits both with WRC15 and with UK at present.