Yet again the forecast was for a hot sunny day, so we wanted height again and having done the 3 highest Mull SOTAs it was time for the 4th highest Sgurr Dearg. Caroline’s target for the week had been to do 8 new summits to reach 500 uniques, and with 7 behind us we could take our time with a one summit day.

We aimed to park by the ruined cottage at Torness NM628326, but when we got to it, the area was full with several cars and people set up with photographic gear. Plan B was to park by the start of the track we had used for Beinn Talaidh, but on the way there we spotted a deep passing place where we could park without blocking passing.

Getting out of the car we were greeted by a few midges and rather more medium sized brown flies. We applied Smidge which deterred the midges, but the brown flies didn’t seem to mind it: one even landed in the Smidge that Caroline had sprayed into her palm before applying it to her face! We walked back along the road past Torness to discover that only one vehicle remained, the others and photographers who had looked set to stay had all disappeared. A little way past Torness we left the road to head gently uphill, angling our way towards the main stream coming out of Coire nan Each. There was water coming down the stream, but not a lot, and the waterfalls were generally pathetic. At around NM657332 we angled away from the stream to aim for the ridge. We were now getting very warm and observed a sheep which appeared to be trying to cool down by shedding its fleece but hadn’t completely lost it and was dragging it behind. The gradient eased as we turned slightly east for the final ascent to the cairn topped summit. 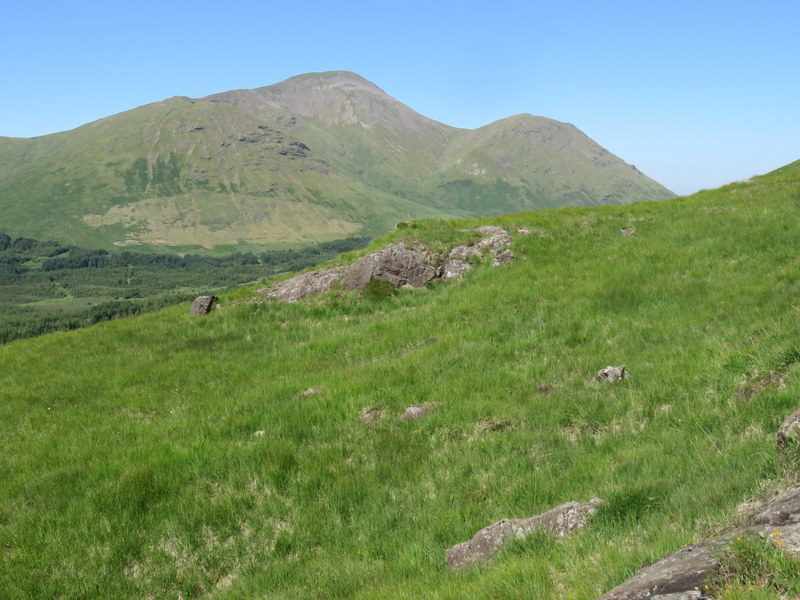 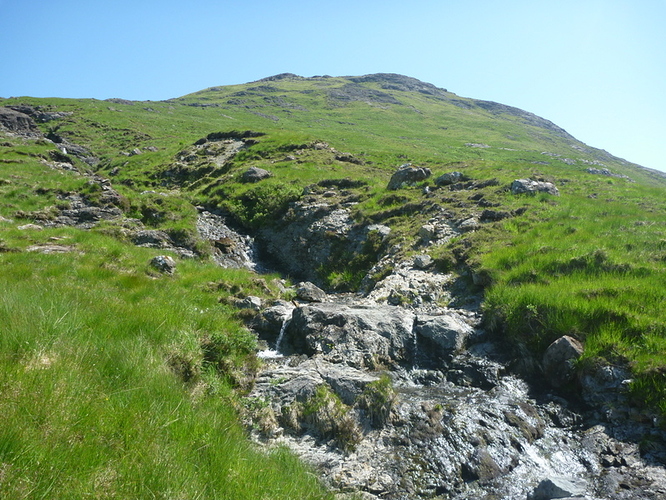 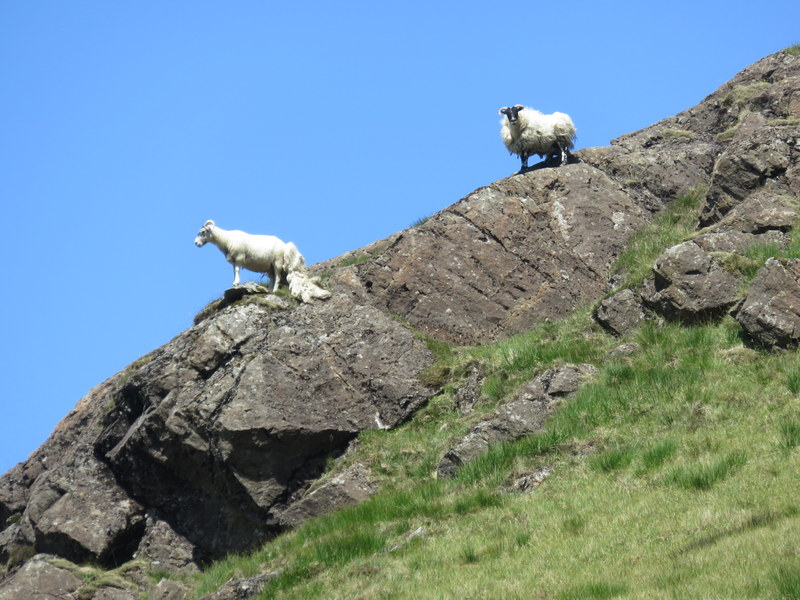 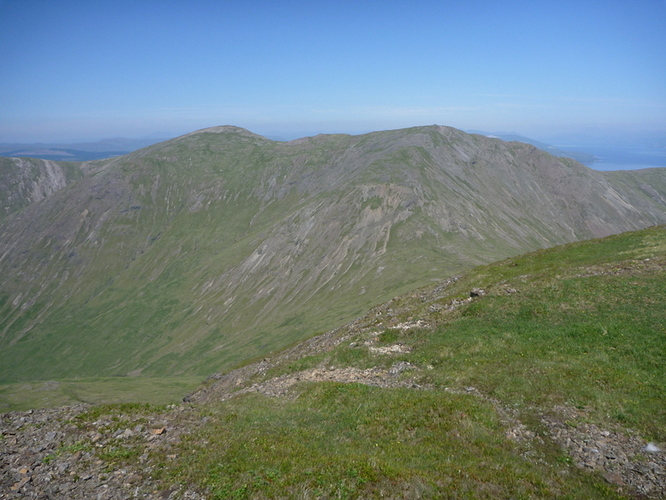 The views were again magnificent, including many of the other Mull hills we had climbed. There was plenty of space on the summit to spread out the HF antenna, and Caroline set up the VHF antenna by the summit cairn. It was still hot at the summit, and with more annoying insects then on previous hills, the worst of which were the brown flies which had also bothered us back at the car. Unusually while they were annoying both of us, it was only Martyn they were actually biting and drawing blood: normally it’s Caroline who attracts greater attention from biting insects.

Caroline’s first 2m FM CQ produced two simultaneous responses, and Victor GI4ONL reached the QSY frequency first. He was soon followed by Jack GM4COX, and it became clear why Jack was keen to work the summit: he had been it’s first activator nearly 15 years ago, and he had been waiting until now to get the complete: it turned out we were only the 3rd and 4th activators. Caroline ended up with 7 2m FM contacts. Martyn qualified with 5 contacts on 60m, followed by 10 on 40m including an S2S for both of us. Caroline tried 20m but got just 4 contacts, and 17m produced none at all. 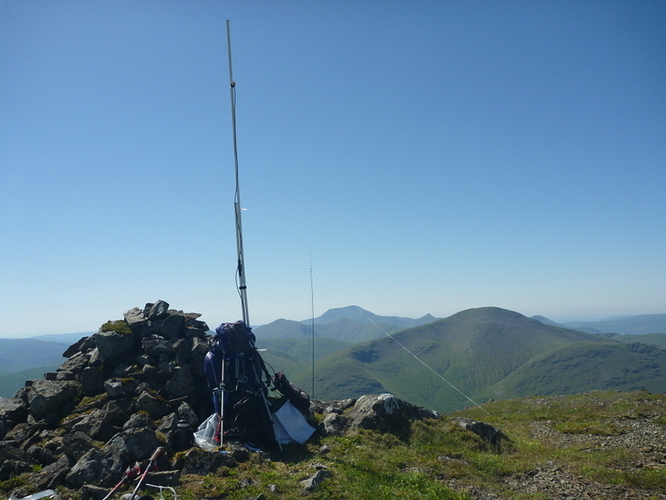 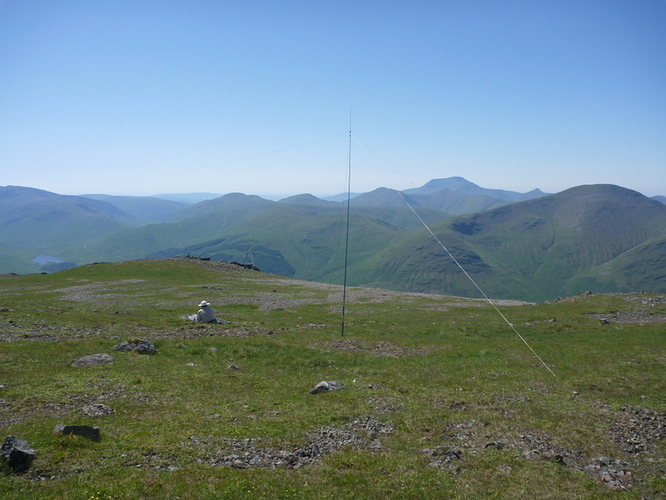 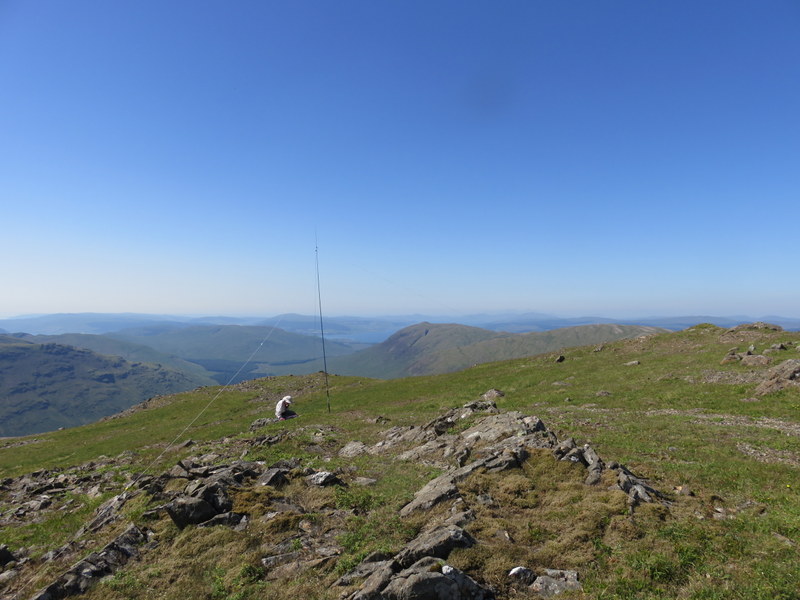 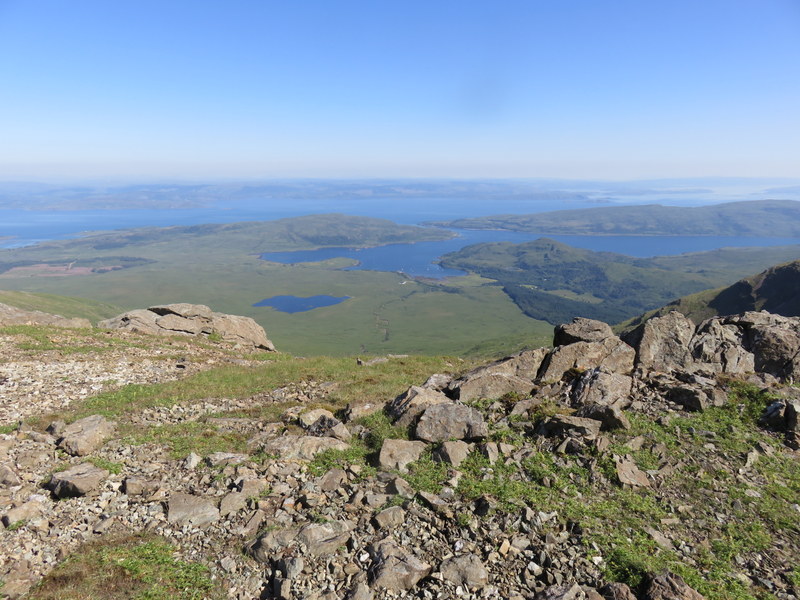 We headed of the hill slightly west of south towards the col with Beinn Bhearnach and then down into Coire nan Each. We found a rock to sit on to pause and eat our afternoon apples. As we sat there we noticed a large bird gliding above. It was clearly not an eagle: a pure white body with white wings with the outer half of the wings black. We were too busy looking at it to take photos before it glided over the ridge of Beinn Bhearnach. Examination of bird books suggested that it was probably a Snow Goose. As we continued our descent we heard Colwyn MM0YCJ calling from WS-312: it was a difficult contact and we had to re-ascend a bit to make it. We followed the stream all the way back to the road and then back along the hot road to the car.

We had time to take the longer slower and more scenic route back to the cottage via Glen More and then round the B8035. It as well worth it for the views even if there were some slightly scary blind corners as the single-track road passed along the cliffs. There was lovely afternoon light as we drove round the coast road.

Congratulations on reaching 500 uniques Caroline.
You certainly picked the right week to visit Mull. Excellent photos and reports from all the activations.

You certainly picked the right week to visit Mull. Excellent photos and reports from all the activations.
73, Robin. GM7PKT

Yes, we couldn’t really have asked for any better weather: if I was being picky I would have liked slightly more breeze and temperatures about 5degrees lower. Now to plan the next expedition: Angus in September.

Heh! Yes, the weather does seem to have been pretty good for you. Only time I visited Mull (for a geology field trip around Easter, 1980?) I think we had one afternoon when it wasn’t wet, which happened to be our first. The remaining five days it was either raining or obscured by a wet mist…

I liked the pics and the story. Sounds like you may have enjoyed a roast goose for dinner, had it been available.