My last three Activations have all produced some nice DX.

Sunday, 1st April. G/SP-010 Winter Hill. It’s is not a summit I particularly like, poor take-off, just too flat. Nevertheless, 3 x ZL and 2 x VK in the log was a fair result on a 20m band that’s well in the Doldrums.

Thursday, 5th April, one of the best SOTA summits in the country, G/SP-017 Billinge Hill. Brilliant take-off, highly recommended. 2 x ZL and 5 x VK including VK7 Tasmania. Well worth the 50 odd mile drive. Looks like some light at the end of the Tunnel

Saturday 7th April G/SP-013 Gun. Not much more to be said about Gun. Activated it well over 150 times, produced some great DX. This morning, I arrived in the dark and had a bimble up to the trig just as it was breaking light. Being so early, I took the opportunity to put up both the homebrew 40m dipole and the Antron-99.

Looking along the 40 metere band found it was crowded, with North America and ZL making the trip. A self spot and I had a couple of Europeans, followed by a call from ZL1BYZ, many thanks for a new band, John. Next was an armchair call from North America.

By now, 20m was calling and as you can see from M1EYPs video, it was hard work, about 8 calls logged, including ZL1BYZ and VK6NU.

So there you have it, and early morning CQ on 40m may just pay off… 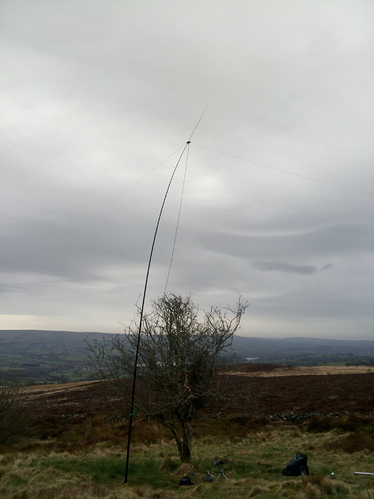 Good stuff Mike. Definitely better conditions today than recent days. I didn’t get any VK but VK6NU was a good signal with me. We both got ZL1BYZ of course, so all good, though I’m sure most of the credit goes to John’s station!

I was a little taken aback when you told me off insisting you were only looking for DX (in the video in the other thread) as you had just called QRZ after working G4IAR. I stood aside as requested - but you then took another non-DX call.

Anyway, thanks for the motivation to get out early doors Mike, and, as ever, the SWL point.

Looking along the 40 metere band found it was crowded,

You can say that again! I found it VERY difficult to find a free frequency even though I was operational already by 06:30 UTC. (I had only planned on being on by 0700 UTC). Possibly the band was busy as 20 metres wasn’t very inviting this morning?

No doubt about it, Ed. The 20m band was in poor shape. There was a ZL1 who was working a North American on 40m, I could here both sides of the qso and both were big signals. Amazing really.

I wonder if any UK activator has worked ZL on 40m ssb, before? Well pleased with that contact…

What mode and power were you running?

Pretty awesome all around. Well done!!

one question: You write

Sunday, 1st April. G/SP-010 Winter Hill. It’s is not a summit I particularly like, poor take-off, just too flat. Nevertheless, 3 x ZL and 2 x VK in the log was a fair result on a 20m band that’s well in the Doldrums.

Thursday, 5th April, one of the best SOTA summits in the country, G/SP-017 Billinge Hill. Brilliant take-off, highly recommended. 2 x ZL and 5 x VK including VK7 Tasmania. Well worth the 50 odd mile drive. Looks like some light at the end of the Tunnel

Could you please give me a few hints on which characteristics of a summit lead to a good take off?

The program HFTA by N6BV is what you want Martin. The ARRL used to distribute it possibly with a book. It lets you enter the terrain slopes and suggests the best height for antennas for different bands.

Essentially, don’t go to the middle of a flat plane, but operate from a cliff edge. Or pick ground that slopes away. This is so ground reflections do not interfere with the direct signal.

I had a contact from a G summit on 23cms with a friend about 145km distant. My report was about 51 and scratchy. I was about 15m from a steep cliff on a large flatish part of the summit (Blencathra G/LD-008). I walked to the egde of the cliff and my report went to 59++. The effect can be very noticeable.

Perhaps this is a similar program Andy:
http://k6tu.net/sites/default/files/FILES/hftasweep.zip

Yes, he’s written an extension program that performs terrain sweeps using N6BV’s program. You need the ARRL CD from the ARRL book to get the actual N6BV program.

Nothing new here - the Grey Line Golden Hour… but well done by the SOTA ops like Mike for doing it /Portable!

I was able to hear John ZL1BYZ on 40m when he was working Mike yesterday - and that was listening through a 20m GP aerial! I didn’t expect to be able to work ZL, but nonetheless, I was still inspired to try my first 40m SOTA activation in a good while. 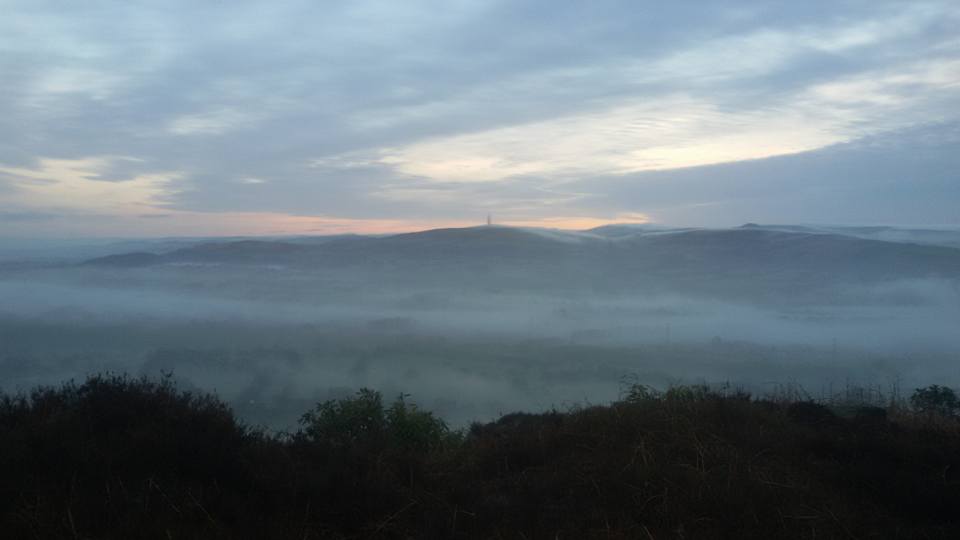 Mistake one, was not check the contest calendar. No excuse as Jan SM3CER maintains an excellent online resource of this information. And sure enough, the SP DX contest was in full swing. So finding a suitable frequency was going to be the main challenge, let alone keeping it, let alone working DX on it! 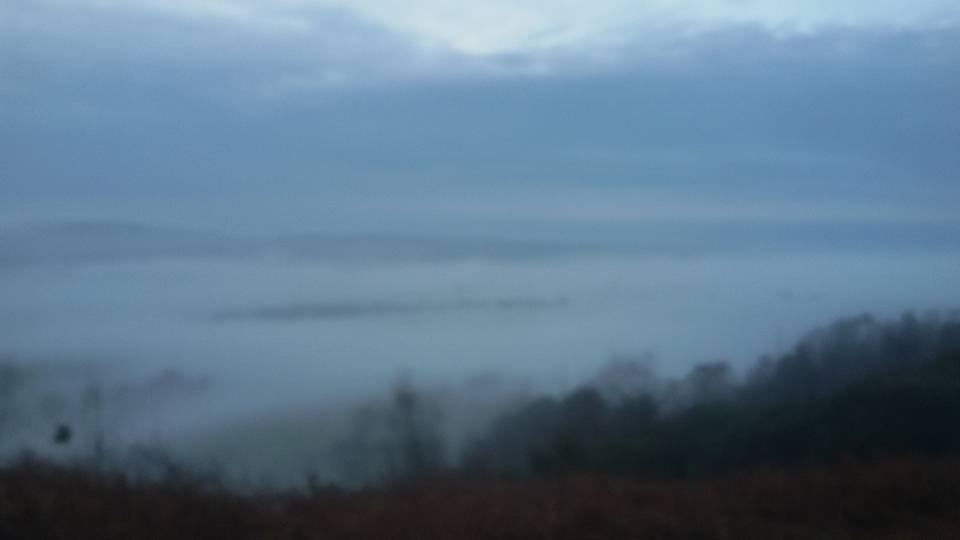 Mistake two, was forgetting to bring my waterproof notepad. In this situation, what I tend to do these days is simply use the logging facility on the DroidPSK app on my phone. It still isn’t as fast or seamless us paper logging in my waterproof notepad, but significantly better than struggling to use regular paper, which I find only works outdoors on the very driest on days. 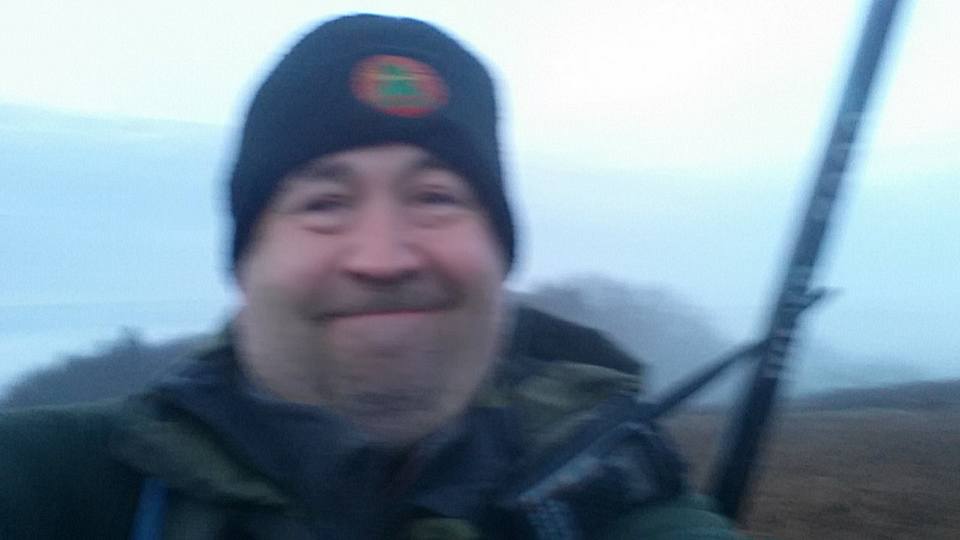 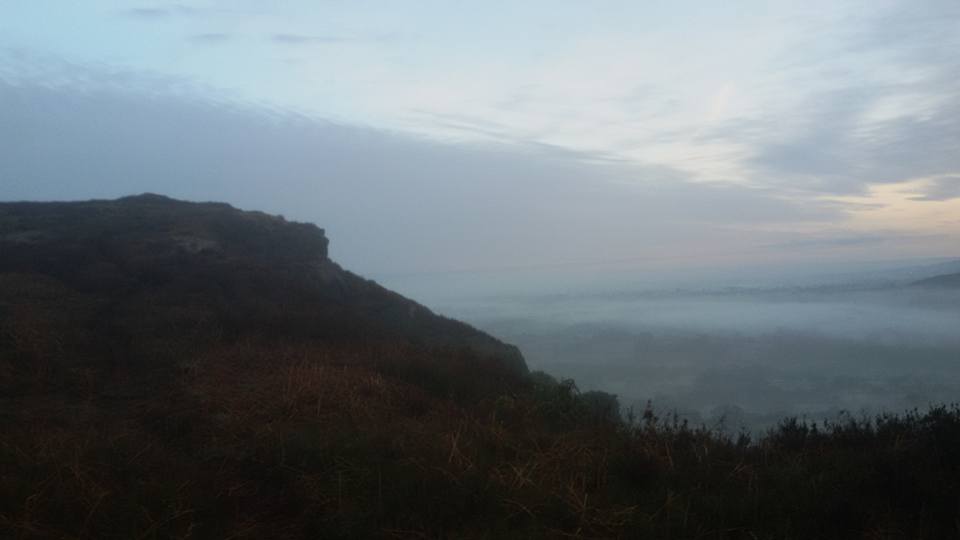 Activating G/SP-004 Shining Tor, this morning, found the 20m band was totally broken. There’s not much that gives the Antron-99 a hard time, however, it went down without so much as a fight. Just 3 EU contacts logged and 5 G groundwave contacts.

Top tip: For the early morning DXers, 40m is still your best friend.

Both ZL and VK logged on 40 ssb this morning. 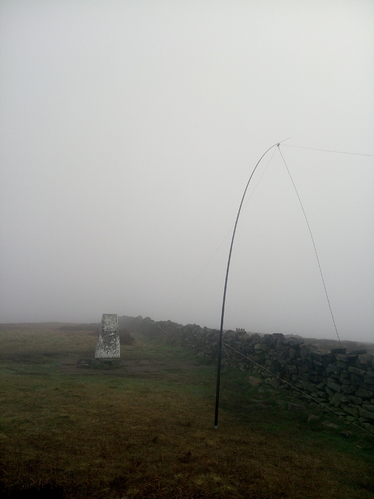 Well done for trying 20m. 40m has always been a favourite DX band for me too. DX is always available (eventually) to those with the determination and skills.

Monday 18/02. Nipped up to G/SP- 013 Gun this morning, in an attempt to hook up with Ed DD5LP, who was activating DL/AM-001 and try for some 40m DX. Using my inverted vee dipole, I was qrv at 0715z and saw a spot for Ed on 7.183. A visit to his QRG found him calling CQ. I called summit to summit and he came right back to me. Great to have a natter with Ed and start my activation with an s2s.

I made my way to 7.175 found it clear, self spotted and put out a CQ, First call in the log was Mario DJ2MX with a big signal. Mario was followed straight in by John ZL1BYZ, for our first contact for some time. The going was fairly tough but the all important signal reports were exchanged, many thanks to John… There was quite a run of EU callers and I was kept fairly busy for some time.

Then at 0742z Warren ZL2AJ gave me a shout, once again the band wasn’t good enough for a decent QSO, however, we exchanged the all important signal reports…Cheers Warren!

My efforts to work VK on 40m were fruitless and so I decided to try 20m on my home brew inverted vee dipole at about 0910z. However, I’d overstayed my welcome on 40m and found it a bit late for long path to VK and miles too early for short path. Nevertheless, as I’d changed the antenna, I put out a CQ. 19 contacts were worked before the cold wind started to get on my nerves and I pulled the plug.

71 contacts for the activation.

Thanks to all the callers…

Sorry, Mike - was listening, but 40 was pretty noisy with summer storms somewhere on the east coast of VK. Better luck next time. John VK4TJ