Apologies to anyone chasing me on 40m this afternoon on Creag nan Gabhar. I’d sucessfully qualified the summit on 15m and 20m ssb, but foolishly decided to try and make some G Chasers happy on 40m.

It was the usual lafe afternoon bunfight and I was forced off frequency twice. I pulled the plug and came down after working just a couple of stations.

Anyway, all not lost. I was testing a couple of things.

The other fail was the 5m of rg58, which has developed an intermittent fault at one of the bnc connectors.

Nice afternoon though. 17°C in Glenshee with a light breeze. Plenty of snow on the higher tops. 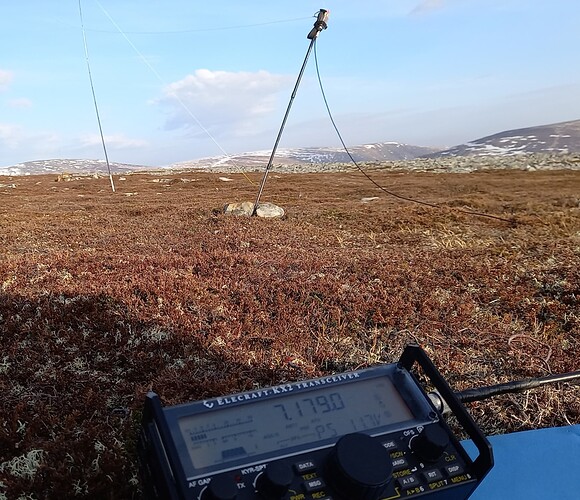 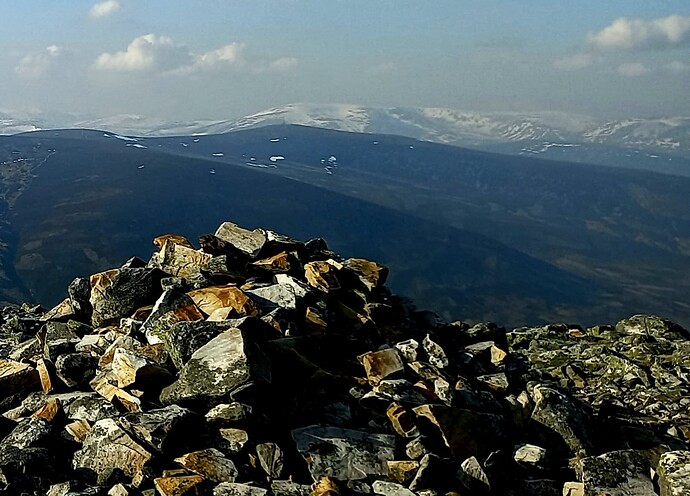 Here’s a more detailed report on the hill from last year, for anyone interested.
Creag nan Gabhar GM/ES-022

It’s a great half day out and I’m sure I’ll be back.

The speed with which the conditions changed on 40m was quite surprising to me. One minute I was hearing you well despite splatter from a local, and then suddenly not one but two QSOs came up out of the background and drowned you and each other out. I know the band goes long in the afternoon but usually it is more gradual. Better luck next time!

Fraser, for a more relaxing SSB 40m activation, go on the WAB net on 7.160. As long as you know your NGR you’ll be very welcome. Net controller will control the madness and there are plenty of WAB chasers who collect SOTA too.

I know the band goes long in the afternoon but usually it is more gradual.

Yes, it was like someone flicked a switch. Thanks for trying Brian.

Thanks for the tip Andy. I’ll bear that in mind. TBH I didn’t need to do 40m. It was a toss up between that and digging out the 2m beam and FT-3d. I suspect i should have chosen the latter, as a couple of 2m QSOs from that summit would have probably been more rewarding.

Fraser, for a more relaxing SSB 40m activation, go on the WAB net on 7.160. As long as you know your NGR you’ll be very welcome. Net controller will control the madness and there are plenty of WAB chasers who collect SOTA too.

I find it my duty to second that statement.

Is the sotabeams carbon 6 pole any good and can I guy it with a single guy? YES and YES! Pole of choice for the summer I think.

That’s nice to hear. I just bought one last week but haven’t tried it yet.

I enjoy the challenge of picking people out. Plus if I have to move freq it doesn’t much bother me… as long as it’s not too cold/wet/windy.

I had the middle of my EFHW at least 5m up, at the top of the third section. The antenna behaved the same in testing (swr) as it did on a 7m pole. On a summit, brought in solid reports on 15m and 20m ssb. It stood perfectly upright with ine guy in 15mph wind.

Me too! I guess I couldn’t be bothered re-spotting for a third time, as this involved a 100m walk to get a phone signal. Also with the coax playing up…

On that subject, playing around with the mfj259 and a dummy load revealed the problem. Look at the size of the centre hole in the left hand adaptor! 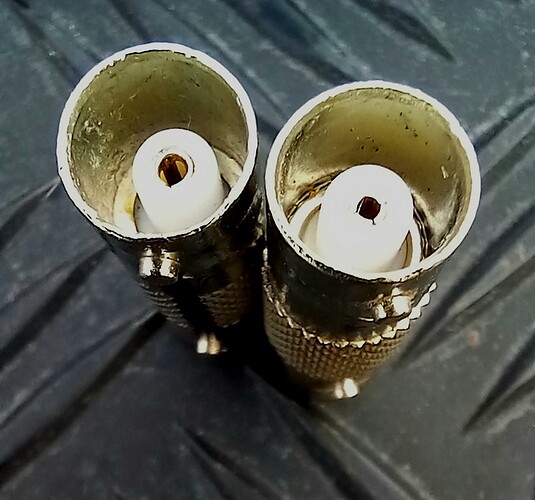 2/minute then. I did 14 in 6mins when last on the WAB net with someone acting as net control. That’s 2.33/minute. Net control wins

the size of the centre hole

Ah, one of the Middle Kingdom’s finest export products

as this involved a 100m walk to get a phone signal.

Oh… yep that would be a drag!

but it’s more “fun” trying to pick out partial callsigns

It’s always amusing when I play back a video of me operating, and I I ask a caller to repeat their call when it’s quite clear on the video! I always ask myself, “why did I not hear that?” I suspect it’s brain overload at times…

Try CW. Sometimes the chasers must think I am an idiot sending me a clear callsign that I should know without QRM and I still don’t get it on first go.

I still don’t get it on first go.

It’s not just you.

I’m with you Gerald, I enjoy working lots of stations and trying to pick out the QRP/weaker ones in-between the big guns.

Nic on the other hand hates it when it’s manic. She very much wants a disciplined approach, with one caller after another clearly making contact… you can imagine how that is on 2m or 40m at a weekend ha ha!!

After a handful of contacts she’s had enough and just gives me the microphone. Sometimes halfway through me trying to write down callsigns in the log. Chasers have to be quick if they want to speak to her, otherwise they get stuck with me

Having said that, I do like calling into the WAB net, when conditions allow. It is well controlled and fairly allows everyone to make contact, which can be just as satisfying, especially if inter-G conditions on 40m are challenging.

40M was a bit mental when I activated Moel Famau. Nearly lost my rag with a few stations continuously shouting their callsigns over a station Im having a QSO with.

Such is life eh?

Was away from home QTH working /P and QRP in Fife, not on a hill, and waiting for your pileup to ease but it wasn’t to be. Chasing as a QRP-er is certainly a challenge but that’s all part of the fun of SOTA. Enjoyed the activation though, and also today’s from Mount Keen, too. Great work as always Fraser.