My son’s rock climbing training season finished last week and won’t start again until next October, so I’m now free to activate other mountains than Mt. San Cristóbal.
I selected Mt Itzaga for today, which is only 29 Km from my QTH and I was fancying to activate it for quite some time, as I had not activated it since October 2014.
Here you can see the mountain location with respect to my QTH and the city of Pamplona. 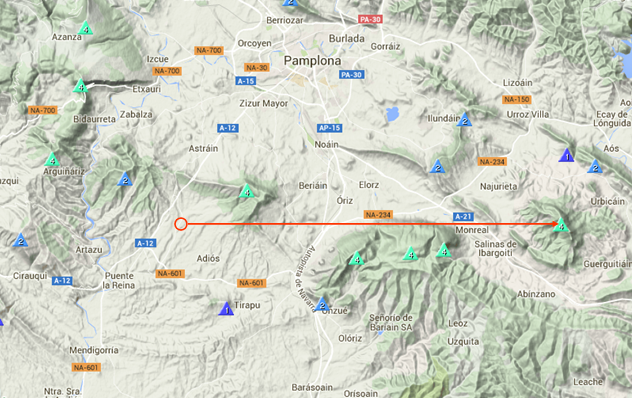 Although it’s not necessary because I had already hiked this mountaing twice from this start point, this is the GPS track I downloaded from Wikiloc and followed doing the same top path for both, ascent and descent. 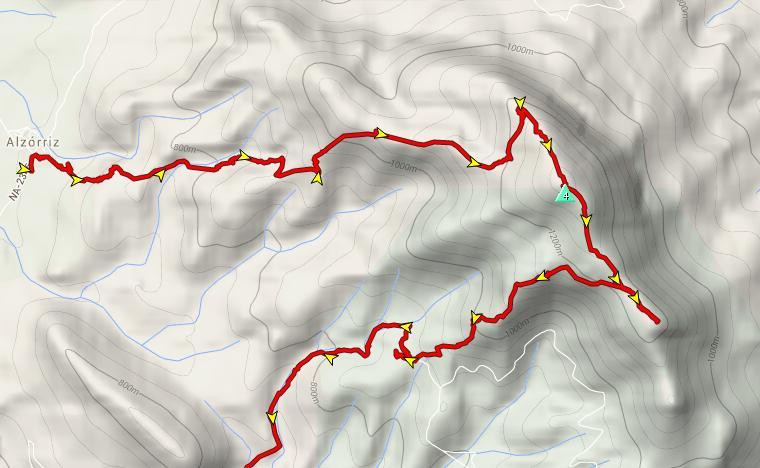 This picture taken when I was driving this morning from home to the little village of Alzorriz and you can see that the summit was wrapped in a cloud. 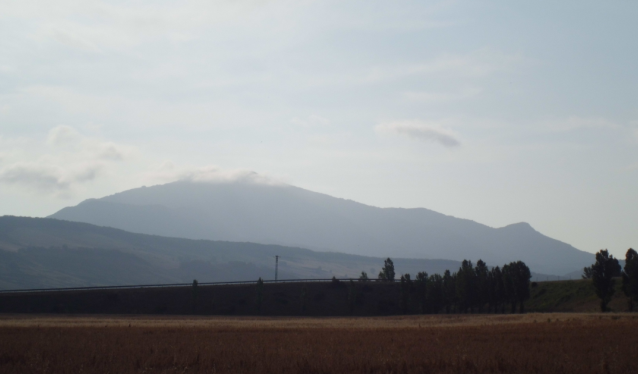 The first part of the ascent goes through this type of track, which was very easy to follow: 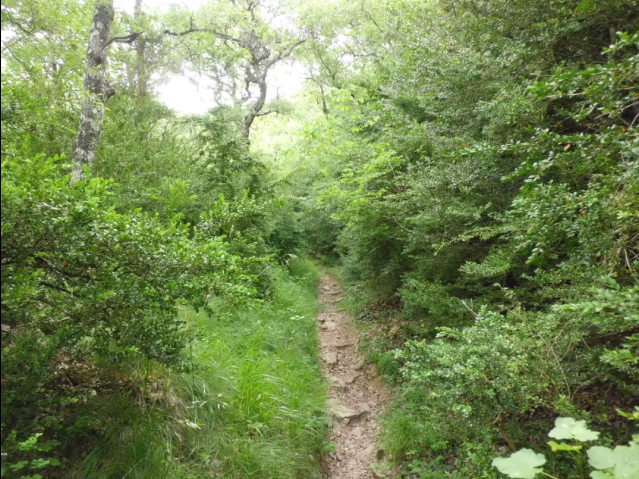 The start point in the village of Alzorriz is about 625m a.s.l. and once the track has reached about 1 130m a.s.l. it merges into a wider track which goes until the ermitage you can see on the left side far in the distance. The summit was still in a cloud: 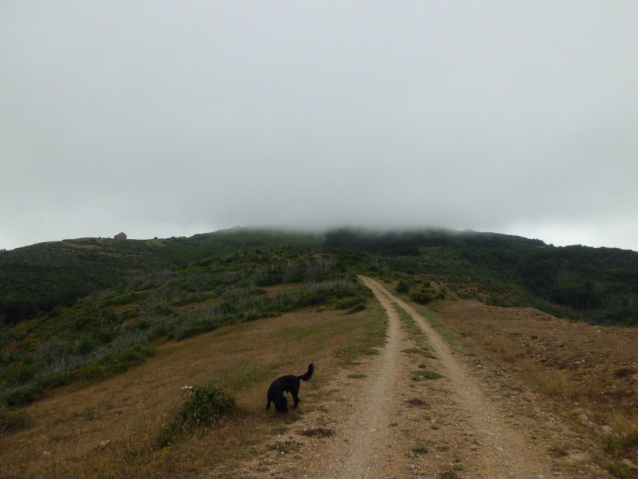 Here you have a closer look of the nice ermitage: 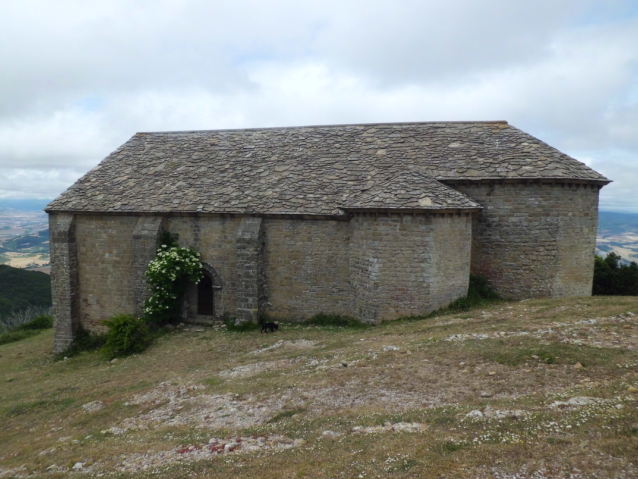 When I got to the windy and a bit cold summit, I put warmer clothing on (scarf and windstopper), I quickly set up and to my frustration I found that, unfortunately, something was not working properly with the EFHW antenna, as I was copying very weak signals and I was unable to find a low SWR with my MFJ-941B tuner. After several minutes strugglying to find the problem and not been able to correct the issue, I decided to put in place my back-up plan.
I took just the wire of the EFHW and connected it to the BAL/WIRE input at the rear pannel of my MFJ-941B tuner.
This provided stronger background band noise and stronger signal on the receiver and this was a good sign.
I wasn’t able to tune for perfect 1:1 SWR this about 10m long wire on 20m band but the achieved SWR was low enough to go ahead and transmit without any worries.
This is a picture of myself at the operating position taken by one of the many, many mountaneeres visiting this summit today. 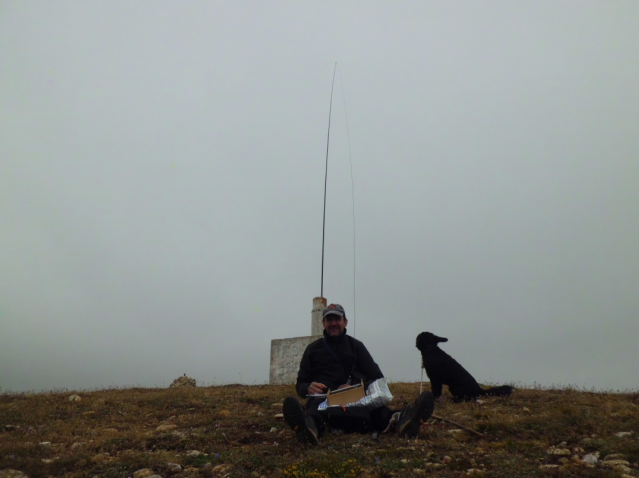 I had announced in my alert that I would work 30m first but after the time wasted trying to find the problems with the EFHW and putting in place the back-up plan, I decided not to work 30m and started on 20m SSB.
I had a run of 19 QSOs in 25 minutes, but I must say that QSB was very strong making me loose some contacts due to being unable to copy the signal report and the station disappearing in the QSB never coming back. This was the case with G0FEX and HB9BIN/P from SOTA. Both are NIL and I’m very sorry for that.
When the deep QSB made 20m SSB quiet with no replies after some CQ calls, I QSYed to 40m CW, where I logged 5 QSOs only and then I had no more replies.
At this point I QSYed to 6m CW where I copied an extremely strong EA8 station calling CQ JA, so I didn’t bother him with my call from SOTA. I QSYed a few Kc down, selfspotted and called CQ several times, but nobody seemed to copy me. At one point I heard a very weak signal but the QSB quickly sank his signal in the noise and I couldn’t even copy his preffix.
After my unsuccessfull trial on 6m, I decided to go back to 40m, where my good friend Ric EA4ZK made QSO with me and spotted me on a general cluster, which produced a good number of EA chasers. This second run on 40m gave me 17 QSOs in the log.
This is the log 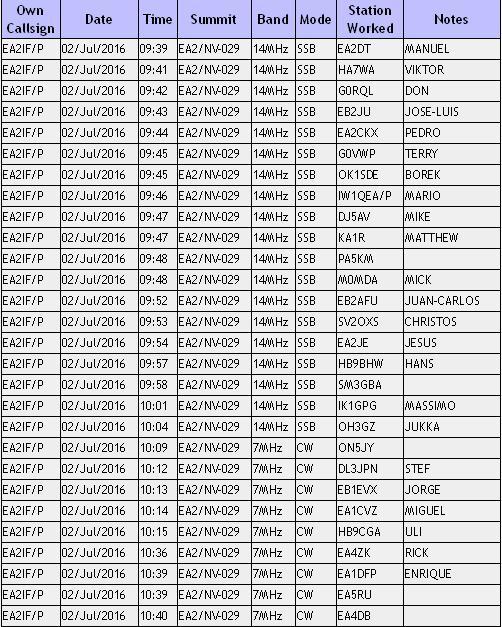 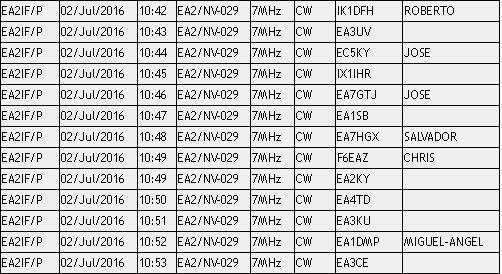 After some more unresponded CQ calls, I announced QRT, packed up and starte my descent.
about 150m after having left the summit, I was going to put my sunglasses on but I wasn’t able to find them. I feared that I may have forgotten them in the summit, so I got back there to find that they were not there. I don’t know how and where but it’s clear that I unfortunately lost my sunglasses.

This was the second unfortunate of the day and there is saying in Spain which goes like “there are not 2 without 3” and it got perfectly fulfilled today.
When I completed my descent and arrived to the car which I had correctly parked at the side of this little road: 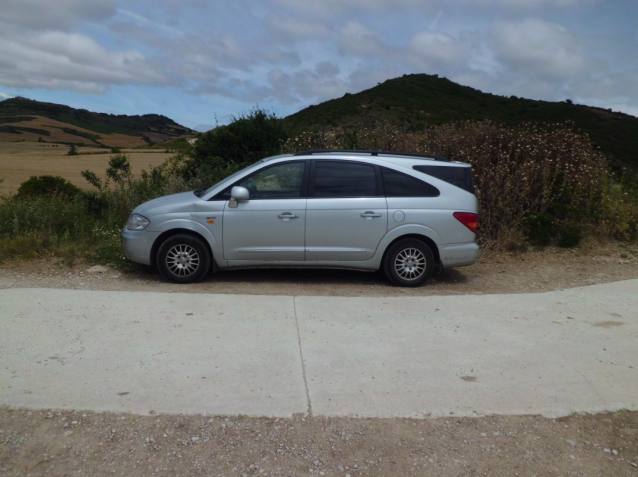 I put my staff and our dog Lucho in the trunck of the car and when I was about to open the drivers doors for me to get in the car, I found that someone had unfortunately hitted and bended the front left side of my car without having left any card, paper, explanation or teleohine number for me to contact the driver of the hitting vehicle. 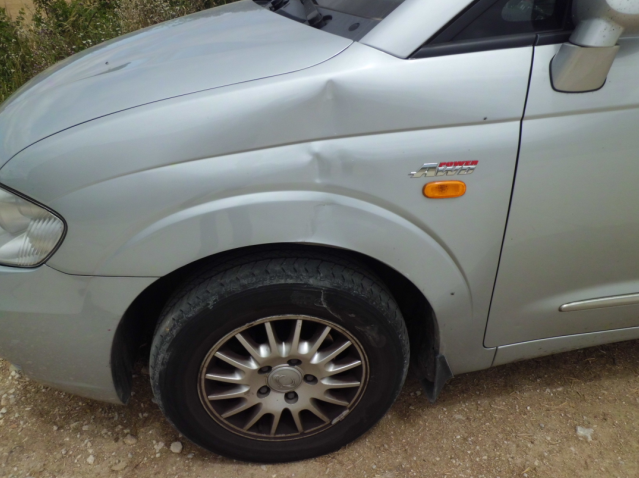 Well, the good thing is all these 3 unfortunate events are something easy to solve and none of them will stop me from activating soon again.

Thanks dear chasers for your calls, spots and QSOs. Apologies to those I couldn’t log due to QSB.

Hello Guru
It is indeed a good idea to bring along a tuner even if not needed,it could be helpful and you proved it !

I have purchased a small and light autotuner: LDG Z100 PLUS and haven’t tried it yet but i will bring it along next time and see if i can work 17-15 and 12m.

I see the unfortunate damage on your car… this is right up my line of work,an easy fix but it always involves $$…

Propagation is very poor these days over here but i did hear Europe this morning on 20 from the station. Reception is always better from the summits,there is less noise.
Good luck on your activations.

Hi Eric,
I always carry my MFJ-941B antenna tunner with me to the summits, as it’s part of my SOTA-kit.
In my opinion it’s too risky going up to a summit in the hope that your tuned antenna will perform well without a tuner, no matter the rain, snow or the ground conductivity conditions. I feel safer with my antenna tuner.
The following picture show my SOTA-kit perfectly fitted and preconnected inside a customized red wine bottles wooden box. You’ll see there is a piece of RG-58 coming out from the front right side with a female SO239 type connector in it, which I use to connect the GP antennas or the EFHW.
In this pictures, you’ll see as well some 21 meters of thin winded wire on top of the wooden box lid with its end connected to the BAL/WIRE socket in the rear pannel of the tuner.
I didn’t have those 21 meters of thin winded wire with me yesterday, but I think I’ll put them back again to the SOTA-kit as a back-up antenna.
All I’ll need to do is to turn the antenna switch in the real pannel to select either the one connected to the RG58 or the wire connected to the rear BAL/WIRE pin. Regarding the damage in my car, I’m not too worried, as I have full coverage insurance

Yes propagation is tricky these days, but let me tell you something to keep you encouraged.
Last night I was in my shack working on this activation report while monitoring 20m CW on 14.062 or 14.063 (dont’ recall exactly). Suddenly I heard a station calling CQ SOTA and it turned out to be WW7D/P activating W7W/CH-197. I called him and we completed our QSO after one repeat I needed to copy my signal report due to QRM from other stations on the frequency. That’s 8 or 9 thousand Km away from here, so not everything is yet lost in terms of DX SOTA.