Had a good contact with ea5fx yesterday on 30m. 20m produced no long dx.

Trying on 20m, 17 or 15m was a complete waste of time, in that occasion, even if VOCAP predicts otherwise…

We are both using 5w into endfed or dipole (CT1DBS).

How about setting up a VK-EU S2S sked / party / event specifically for 30m? Obviously, it would be as big or have the same appeal as the previous one with the limitation of modes, but it would be good to have all participants focused on a band to explore the possibilities.

In fact I’d like two such events, so I can try one with my dipole, and one with a groundplane (which I am yet to build). I realise that two different days will not give me a scientifically valid comparison but I may notice something and it will (as ever) be fun doing a couple of SOTA activations.

but I may notice something

Waste of time comparing different antennas at different times. You need to do the comparison at the same time, like this real-time test that I am running:

30m long path into VK/ZL in our mornings can be really good - though sometimes short!
I’d come out to play if we arranged a sked/event specifically to try 30m s2s!

Are you moving to Australia Mike?

I did allude to that issue in my own post. Too many variables.

However, you know me, and I’ll probably do lots of 30m dipole activations and lots of 30m GP activations, and build up a picture over time with lots of data. Then results and trends can emerge and be treated a bit more seriously.

Then results and trends can emerge and be treated a bit more seriously.

Dozens of people have already done thousands of activations with vertical and horizontal antennas and thus-far no firm conclusions have been drawn (as evidenced by lengthy circular threads here). I look forward to seeing your results and trend analysis.

Ha ha. I know. Perhaps I should have said “results and trends can emerge and be treated a bit more seriously BY ME”…

…as I know that nothing I have done in my previous thousands of activations proves anything general or is applicable to anyone else. However, my own logbook has conveyed a consistent conclusion from my 20m activations over the years: horizontal = better for EU, vertical = better for DX.

The results only apply to me. But that’s all the results from any upcoming 30m operations need to apply to as well. Which is better for working DX - for me?

Anyone care to suggest some dates/times?

I’ve always avoided suggesting any events for 30m as CW and data modes are the only acceptable modes in Region 1. Not everyone has CW skills and many have never tried data modes or lack suitable computer gear to go with the radio they do have.

However, as someone else has suggested this then I shall try to get out and on the air. In my case it will be interesting as I know my 30m antenna is a real compromise being significantly shorter than a 1/4wave. Given sufficient time I may try to make a better vertical.

many have never tried data modes

…We should have a SOTA Challenge!

Hi Tom
Would it not be better to setup two seperate antennas using the ft817 to switch between the front and rear antenna port.
Done this on the EU-VK s2s day and ended up using the dipole over a ground mounted vertical. I didn’t manage to work any VK s2s on the day but switching to the dipole I could hear a VK to EU QSO’s compared to nothing with the vertical.

Hi,
I’m definitely for a 30m DX VK<=>EU event.
Reading this thread brought to my mind the amazing pleasure when I worked VK7CW last August 2nd from SOTA Alto do Anxelio EA1/CR-020.
The summit is not far from the Atlantic Ocean shore as you can see in the following picture I took from the trig point: 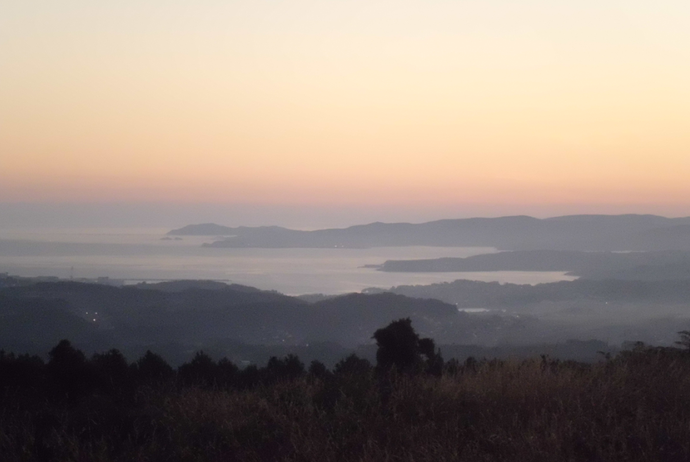 I was using my trusty FT-817 at 5w into an EFHW with the top hanging from a 7m long telescopic fishing pole and a 7m long counterpoise wire slightly elevated above the ground (about 0.5m).
I guess VK7CW was pushing much harder than I was. His signal was a great 599, while mine was 339 if I remember correctly.
This was the full log of that activation. Notice it was pretty early in the morning. 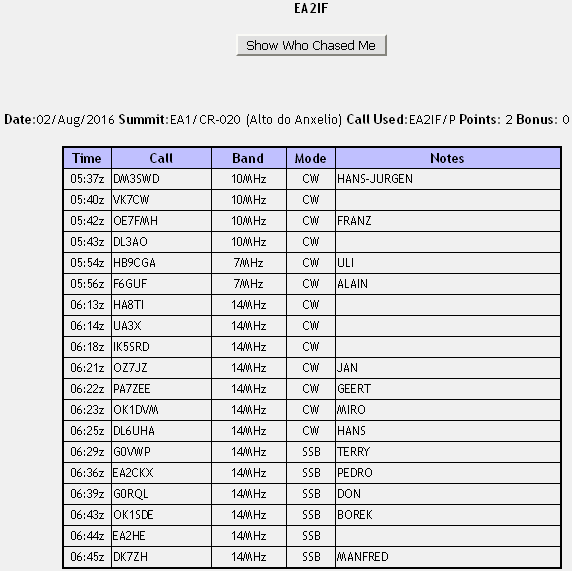 Having experienced the pleasure of contacting VK and even ZL stations some other times from SOTA, I’m definitely… ready to have more of that pleasure any time you guys want

My takeaway from this brief sample of 30m propagation is that I should spend more time on 30m at that time of day. And I will work up a 30m vertical as I think it will be a good antenna option.

We know that the lower frequencies will be producing more DX during the coming solar activity minimum so gearing up for better antennas on 30m and 40m - even 80m - would be a smart move.

Mike, regarding ssb on that band, yes it has been used quite effectively for intra-vk SOTA contacts and has proven to be a very useful extra band option. It has not become a popular band for all, because it is not available to all licence classes. Only the Advanced licence has access to it in VK.

I may have been calling at exactly the right time relative to sunrise in EA. I did hear some DL and I think an OK calling me but they were just speculative as they did not respond to my calls. Presumably this was due to it being too late for them.

Thanks for the interest.

I will work up a 30m vertical as I think it will be a good antenna option.

Hmm 30m… my favourite HF band. The challenge is definitely the antenna. A quarter wave vertical would be best on a 10m pole to get the radials / counterpoise elevated. I have run a vertical on a 7m pole with the counterpoise on the ground, but to me the losses seemed to be considerably higher than an inverted vee dipole, reflecting Graeme’s findings. I have worked into the States on 30m from several summits with the inverted vee and the 817.

If this idea of a VK-EU 30m event takes hold, then I am definitely interested.

Having looked at Voacap Online, for me if any chance from VK6 it would be around 09:00 UTC. Much better chance for the Eastern States guys but happy to go out and have a bash from somewhere.

But I’m in if it happens.

Count me in too. A 30m EU - VK session on SSB will be fun. Its all about having fun.