The forecast was for a dry day initially but with a band of rain due to come through late afternoon or early evening, so we decided we could aim at some of the higher Southern Upland hills. We drove through the scenic Mennock Pass to the pretty village of Wanlockhead and parked in the car park for the Lead Mining Museum. There was a sign asking people not visiting the museum to make a donation for parking, but there was no sign of anyone at the Museum though people were arriving to visit. By the time we had booted up and sorted out rucksacks, someone arrived to open up, so we made a donation and headed off along the Southern Upland Way.

We first ascended Green Lowther via Lowther Hill getting good views, but had to stop to apply waterproofs as black clouds gathered and deposited some unscheduled rain on us. Thankfully the rain didn’t last long and we left the Southern Upland Way by the “golfball” on Lowther Hill to take the transmitter track past further antennas on Green Trough to Green Lowther with its set of antennas, though we noticed that the array of microwave dishes that were present when Martyn activated the hill in 2005 had gone. 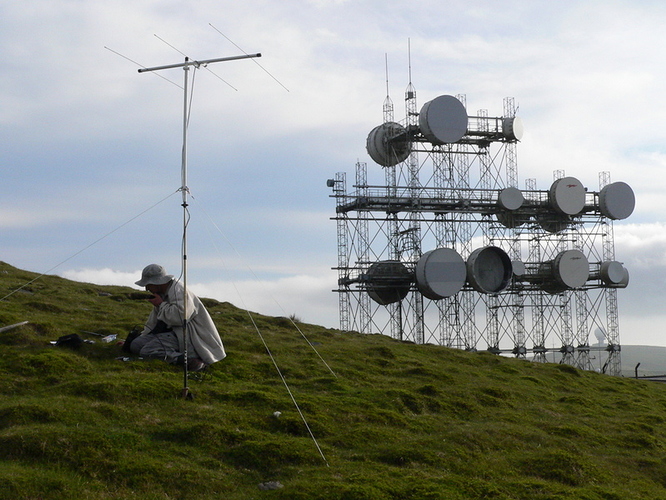 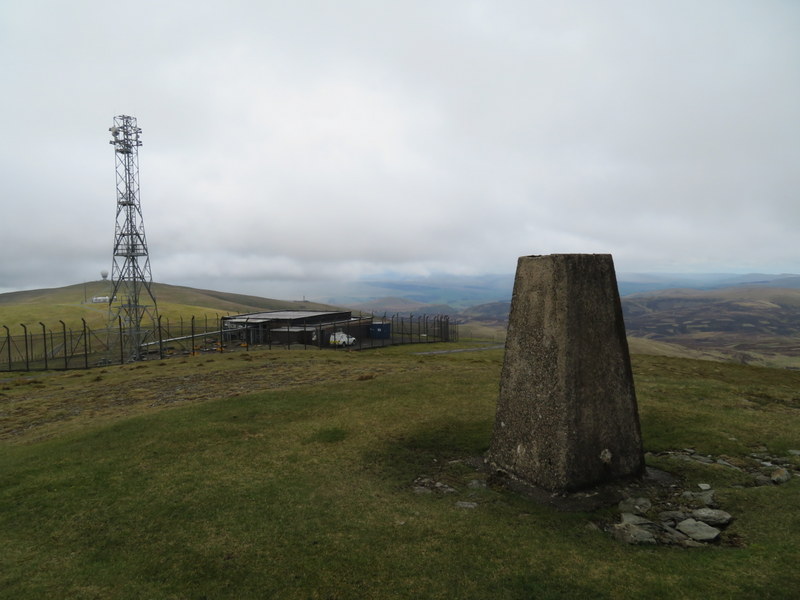 We visited the trig point, but it was too windy to operate near it, so we dropped down to the eastern side below the access road. Caroline used a post associated with the road crash barrier to support the VHF antenna and or the first time on this Scottish trip qualified on 2m, with 5 contacts starting with an S2S for both of us with GM0GAV on SS-005. Martyn qualified with 8 contacts on 60m, after which Caroline had a nice run of 14 on 40m ending with an S2S for both of us with HB9DIZ on HB/TI-158. 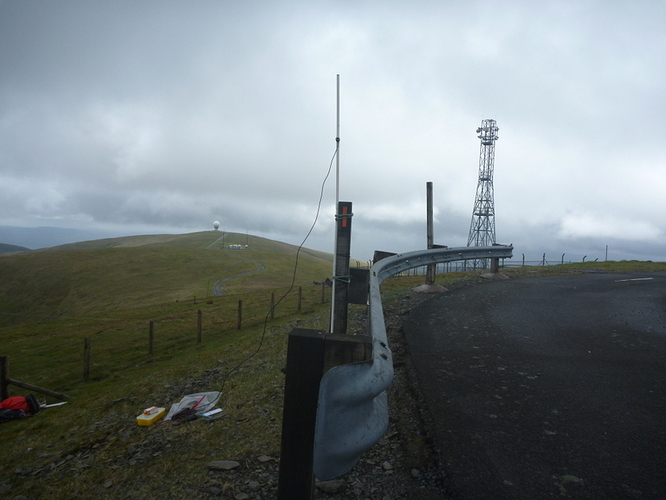 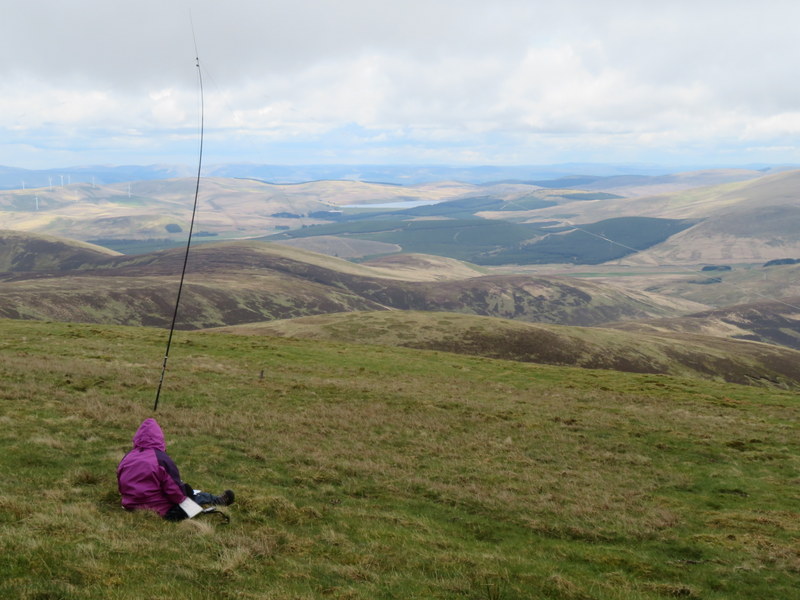 On the descent we met other walkers for only the second time of the week. Like the earlier time ascending Hods Hill we were on the Southern Upland Way. The weather had improved and we had better views on the way down. After a brief stop back at the car to refresh water supplies, we took the track up Black Hill, joining a wider track on Black Hill which ascended slightly skirting round Green Hill, we spotted an ATV track heading towards the summit of Green Hill which is marked by a single fence post. Martyn qualified the hill with 8 60m contacts. Having taken half an hour to get 3 2m contacts Caroline went to 80 getting 7 contacts before a mini pileup of 13 contacts on 40. We got the radios packed up in the dry but the threatening heavy rain arrived just as we set off down. A rapid descent and we were back at the car in 17 minutes compared to around 45 on the way up, but we still got quite wet! 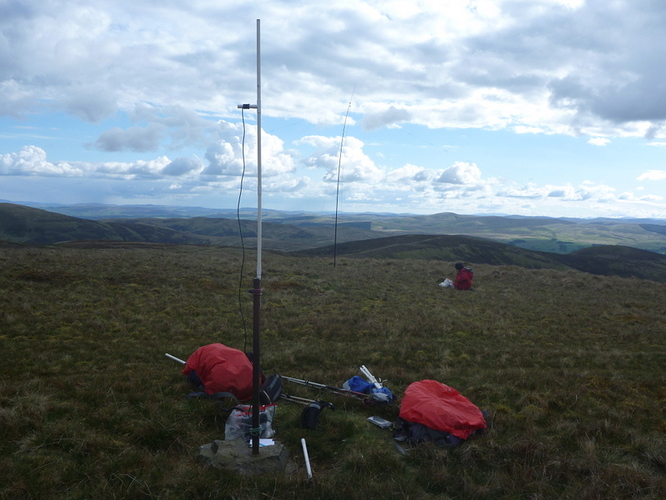 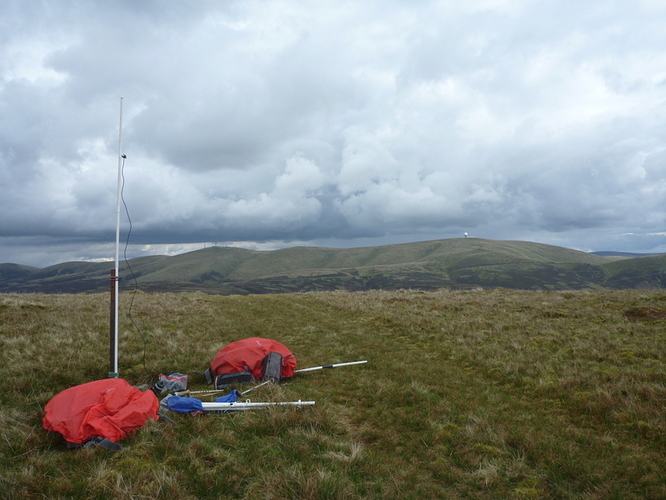 If you knew where to look, you got a fleeting glimpse of that microwave array from the M74 northbound.

There have been microwave links on Green Lowther for a long time. He’s a recent old picture from 1975 but there was stuff there in the 50s. 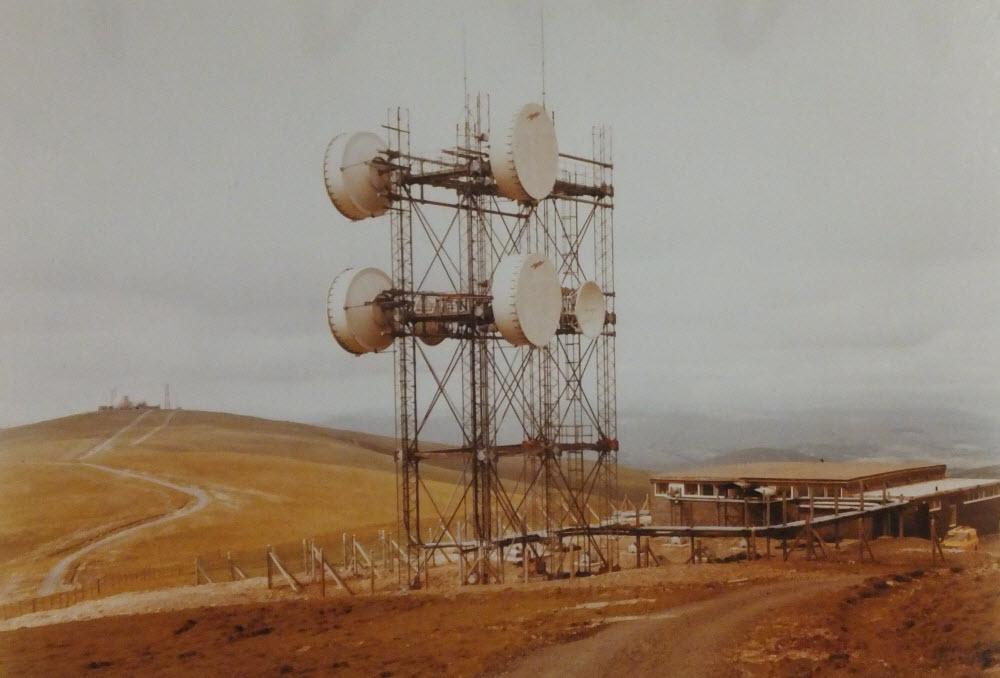 Although the microwave array has gone there’s still a lot of RF on Green Lowther: my handheld was picking up a lot of airband breakthrough, and there were occasional hints of interference on the FT-817.