My activation of Kit Hill today (G/DC-003) was carried out in excellent weather although it was cold at around 6°C - but I was well wrapped up. 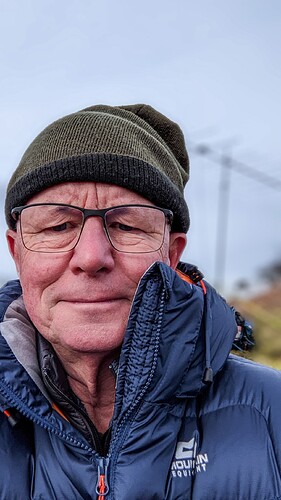 My main objective was to try out the Diamond 144S10R2 ten element Yagi antenna. Fully assembled it is a little over 2m long but it comes apart and folds into a bag I made. I wouldn’t like to carry it a long distance but it can certainly be classed as portable. Assembly takes just a few minutes. 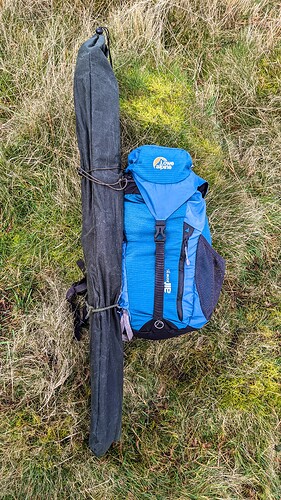 With two sets of guys it even stays upright! 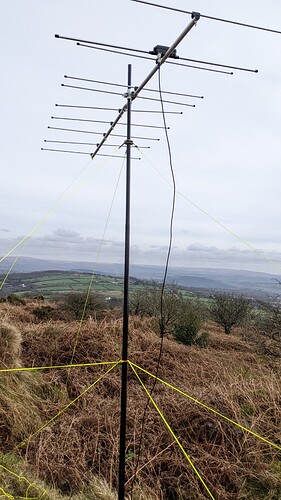 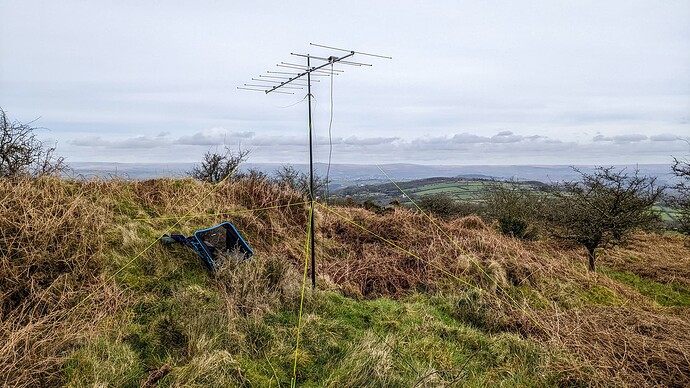 The bit of cord you might be able to see waving about is attached to the nose of the antenna. I wasn’t using it at the time I took the photograph but I did later when the breeze picked up, tying it to the bracken.

The upper guys are secured by loops and zip ties to a plastic spool which used to carry ptfe tape. It sits just above a tube section and is free to rotate so the antenna can be swung around. 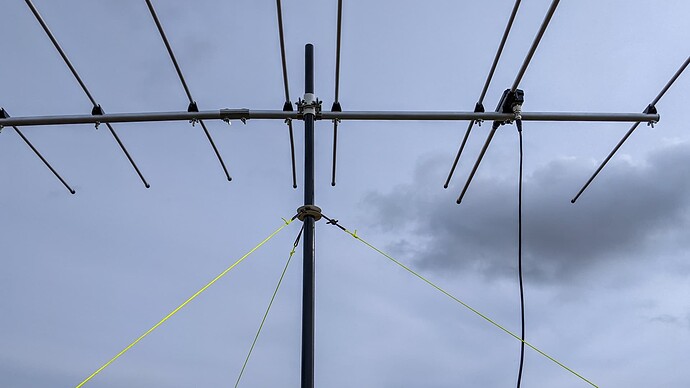 I had agreed with David (GM0EVV/P) to start on 2m CW with the antenna vertical but I was 20 minutes late and he had gone onto 30m by then but I did get a reply to my CQ, Damian M0BKV which threw me for a moment for a while because I was expecting to hear David and my brain tried to trick me into believing his callsign was what I was hearing. Well, they both have an M and a V in them! But the mental clouds cleared and Damian and I concluded our QSO.

With the antenna still vertical I switched to 2m FM and Don G0RQL came back with a 59 + 30 signal report. The antenna was working!

Next was Damian (M0BKV) again which gave me a chance to explain my confusion responding to his CW reply. Ian (G3SPI) was next but there was heavy QRM breaking in, from the nearby mast I think. I’ve spoken to Ian before as he lives locally to me and he is always grateful for a 2m QSO.

Going back to 2m CW for a last attempt to reach David on GM/SS-161 I was rewarded by faint signals. A tweak of the antenna direction and he was finally readable. It was very marginal and we both gave each other 329 reports. A 2m CW S2S QSO at 533 km distance was rewarding. David was putting 25W into a vertical. At my end just 10W but into the 10 El Yagi with a claimed 11.6 dBi gain.

Putting the antenna horizontal I found Don again on 2m SSB and I was grateful for his reply as with only data to go it looked like a four modes activation was on the cards today. But just before turning to data I had another QSO on 2m SSB with Graham (GW4EUK/P) on GW/SW-009 at 157 km distance. He hadn’t spotted and I wondered if I had his callsign wrong when QRZ shrugged its shoulders. Then I remembered he had told me he was from Chichester and sure enough he was on QRZ as G4EUK.

Switching to FT8 I saw a little traffic in Eastern Europe but I couldn’t raise anyone. A G callsign in Yorkshire started calling CQ but again I couldn’t get a response from them. Fortunately, Don rode to my rescue again and gave me an FT8 QSO to complete the set.

A fruitful morning and a few lessons learned. I might get a little amplifier to improve my “reach”. The 45W Microset RV-45 looks suitable for the antenna which has a power rating of 50W. Decisions, decisions…

Very many thanks to all those who replied today. The weather forecast is poor for the weekend so I will be staying indoors and perhaps do a bit of chasing.

Hi John,
For me 533km on a so called “Flower Pot” antenna was a personal best. My antenna was on top of the fiberglass roach pole, with the feed point at about 6m and fed with 7m of RG58. We had nothing to spare with the signal levels. For the QSO I raised my rig power to 50W. During last year’s Sota CW day I managed a greater distance, into eastern Germany, but that was a super Club station in DL and 2 X HB9CV’s (about 9dB gain) at my end.
WX my end started with -6C and blue sky, but as the day progressed it clouded over and we had light snowfall. I was wearing my winter kit of 5 layers and 3 pairs of trousers. Sending Morse with gloved fingers is the new art form.
I think we have something here we should pursue.

Radio never fails to amaze me

David, it was a very satisfying exercise and with such very different rigs at each end. I need to look at raising my antenna a bit higher and being a bit more careful choosing my spot. In hindsight I could have moved further around the hill and had a better take off. Also a hill without communication transmitters on it might help!

Unfortunately I didn’t see your post advising that you were going out to Kit Hill before it was too late to reorganise what I had planned for today. Oh well, hopefully I will be free the next time you are going out. Well done on the contact with David north of the border. That was excellent for vertical polarisation. Horizontal is definitely better over longer distances.

I need to visit High Willhays G/DC-001 soon to get the winter bonus. Hopefully, I can give more notice. Today’s affair was driven by Covid - or rather being free of it.

being free of it.

although it was cold at around 6°C - but I was well wrapped up.

That aerial is a monster.

Your selfies are getting better.

Well done on the expedition! I’ve got a similarly sized yagi and could be persuaded to carry it up a hill for the chance of a S2S with you.
If this incessant wind ever dies down.

Hi John, thanks for your report about using the new 2m beam with photos. Very interesting.

Thanks Fraser, I’m working on the selfies. It’s about finding something between Tom’s (M1EYP) where it looks like he’s been propelled out of a box by a spring and yours showing you as the serious mountaineer you are.

Is there a look for “Old man on a hill”?

The forecast looks better for Sunday where you are.

It’s all smoke and mirrors to be honest. I could make walking out to the car look like extreme mountaineering.

Busy rallying and socialising this weekend and Mo is 2nd week post-op recovery, but we’re both looking forward to getting up a hill soon and I’m keen for more 2m fun.

very nice report! 2 m SSB is so much fun!
Since you just started on VHF, allow me to post some thoughts.

50 W vs 10 W is a huge difference. So definitively yes for a PA. Be sure to get a linear one that doesn’t splatter too much.
However, I would first change the antenna.

10 elements on a 2 m boom is overdone. The design is old fashioned with all directors at the same length. Looks exactly like an antenna a local chap once gave to me. When tested on a summit, it was worse than a modern design with 1.5 m boom length, only 5 elements and proved 8 dBd in free space. I disassembled it to make a new antenna of the aluminium rods.

Now you know what 10 W into a crappy antenna can do. Just imagine what 50 W and a decent antenna would do.

Could I again extol the virtues of 2 stacked HB9CV aerials for 2m ssb/cw on mountain tops. One aerial gives about 6dBd gain, Two stacked, at the correct stacking distance, gives a total of 9dBd. A power splitter is of course needed. I use RG213 feeder and N plugs up to the power splitter then RG58 and N plugs between the splitter and the feed points. The aerials deliver gain by squeezing the vertical illumination onto the horizon whilst leaving the azimuth unaffected.

10 elements on a 2 m boom is overdone. The design is old fashioned with all directors at the same length

Agree 100%. It appeals to people who think that performance is directly related to the number of elements. It would be quite easy to do better with less aluminium.

Thank you for all the comments. The Diamond Yagi is a curious design. At first glance the radiating element is longer than the Reflector but apparently this is because of the built in choke and electrically it is shorter. I’m not sure how that works but I guess I have to take them on trust.

All the directors being the same length is to give a wider bandwidth apparently. This is something I don’t need, especially if it is meant to cover the US VHF Band plan which stretches up to 148MHz!

I need to get my Nanovna at it and have a look at how it responds. The directors are all 910mm long and I think at the very least the ones nearer the radiator could do with being a little longer. Some E-bay aluminium tube may be needed.

Thanks for the multi contacts on 2mtrs John, let me know when you are out again with all that aluminium aloft for 2mtrs,not a band used enough. 73 Don.

The Diamond antenna has the great advantage of being an off the shelf product of course. The DK7ZB designs are well respected and have proved to be reproducible. Whatever you do - well done and thanks for getting some interest back in 2m SSB/CW.

Don, very many thanks for yesterday, you were a star. High Willhays will probably be next so I can get the winter bonus. But it’s an hour or so walk to the summit so I think it will be HF only with a lighter wire antenna. After that I need to get down to the far south west for Watch Croft and Carnmenellis. These are much shorter walks and qualifying Watch Croft on 2m would be an interesting challenge. Its been done before but worth another go with my new aluminium ladder. 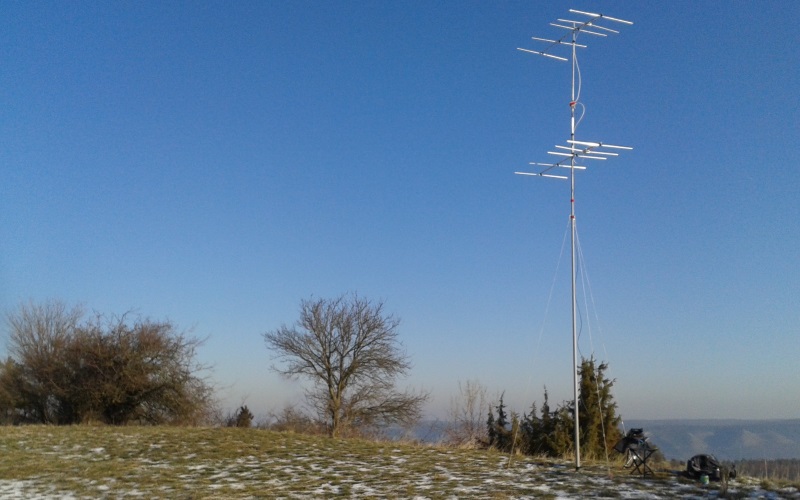 Rather 4.5 dBd / 7 dBd if you look at it realistically and take harness loss and SOTA conditions into account. Nice stack anyway.