The RSGB VHF CC is introducing a new 2m MGM (machine generated mode) activity contest this evening. Running from 1900 to 1955 UTC, it coincides with the 2m FMAC. I’m intending focusing on the new MGM event, and predictions are that it’s going to be popular, so a good chance to work lots of FT8 stations on 2m (144.165 to 144.195MHz), and, all being well, at least one SOTA station!

Other datamodes are allowed (PSK, RTTY, JT65 etc) in this event, but it is anticipated that the vast majority of activity will be FT8.

FT8 should be more considered as a M2M (machine to machine) mode !

No operator skill is needed for making QSOs…

No operator skill is needed for making QSOs

That suggestion has been alleged on here before. Not my experience though. I have found it much easier to conduct SOTA activations with phone modes or CW. Getting a feasible datamode station together and being able to operate it efficiently and smoothly from a summit requires considerably more planning and development.

Once that is achieved, then yes, probably slightly less operator skill is required compared to CW, but significantly more than SSB/FM. I regularly use all these modes as a SOTA activator, so I feel I am in a position to make such comparisons.

You confirm what i wrote “no operator skill is needed for making QSOs”.
One probably need some skill in computer configuration but the software is making QSO without you ! A LOT of hams are “making QSOs” (as they say), while they sleep !
Where is the interest of this ??
Decoding CW or a weak SSB signal is ALWAYS more fun and NOT everybody can do it …

Anyway, i wish you succesfull SOTA activations and i hope to work you during mine !

I’m confirming no such thing. Have you actually tried to make FT8 QSOs as a SOTA activator?

I havent met anyone yet that can effectively transmit/receive using just their brain!

Just throwing that in from us pedants

Answering my own question - can now see you there - replying to the PA3 station.

FT8 should be more considered as a M2M (machine to machine) mode !

No operator skill is needed for making QSOs…

Let’s not repeat this argument which has been going on on various other ham radio reflectors.

Leave each to his own and just enjoy whatever part of the hobby you wish to.

Good for you Tom for giving FT8 a go from the hill, and others too.

Oh dear! Unfortunately I can only give you one like for that. Anyhow

I was very organised during the day. This in spite of only getting in from the previous night’s gig in Milton Keynes at 7am, and later spending New Year’s Day afternoon at the football (Macclesfield 1, Tranmere 1). I got my rucksack packed ready, complete with rotating guying kit and SOTAbeams SB5.

I had charged up my headtorch battery, and the Windows 10 tablet. Imagine my horror then when completing set-up on Cloud summit and discovering that the tablet had only about a quarter charge in it! It’s back on charge now, and tomorrow I will observe how it behaves.

I knew that the tablet would run out of charge before the hour of the MGMAC was through. I decided just to do as much as I could, then switch to the concurrent FMAC, before going to SSB for the main event at 8pm.

Ten QSOs were made on 2m FT8. A potential eleventh contact was looking tasty - but alas that was when the tablet ran out of charge - during the commenced QSO with a PA station, but before completion. Thirteen minutes of the FMAC remained - and I made 13 contacts on 2m FM. On 2m SSB, I added 90 QSOs, making a total of 113 for the activation…

To my surprise, I won! 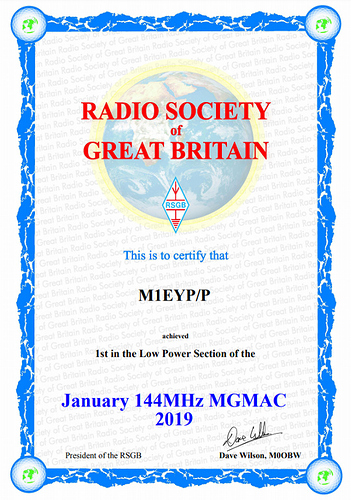 That’s right - all the MGMs were permitted - but everyone used FT8 in normal mode.

It was a good event. A pity they’ve chosen to run it concurrently with the FMAC.

I expect I’ll be focusing on the MGM save for any further charging fails!

The 2m MGMAC returns tonight. 1900-1955z. Most if not all will be on 2m FT8. Decent activity level last month, which will probably increase tonight.

Oh no. Just seen this: 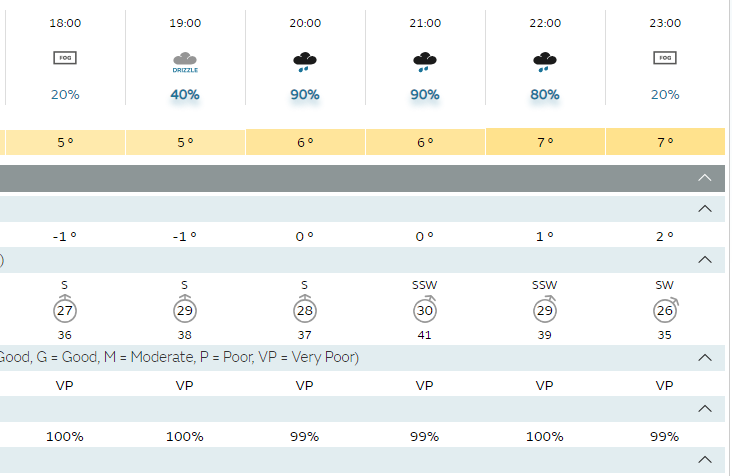 I’m still going for it. But I reserve the right to wimp out of the main UKAC before the 2.5 hours are up!

My headtorch, LifePO4 battery and Windows 10 tablet are all fully charged up though…

The wind and the rain, and the very damp mist that preceded the heavy rain, proved too problematic in the end and I abandoned the activation.

I had problems with the interface again and kept getting error messages. Combine that with one wind-induced antenna collapse and a station incorrectly using the VHF EU Contest mode - causing it to be auto-enabled on my WSJT-X - causing more wasted time as I hunted for a way to disable it - and I made only 5 QSOs on 2m FT8 in the MGMAC.

I squeezed a single contact in on 2m FM before 8pm, so there will be a token entry in the FMAC.

The rain became heavy as the UKAC began at 8pm. The wind buffeted the bothy bag msking it noisy, and making it difficult to keep the damp out. I made 6 QSOs on 2m SSB before losing the will to live and deciding to call it a night.

I got a bit wet during packaway and descent. A terrible contest effort, but at 12 QSOs, I guess a perfectly respectable SOTA activation!

Back in the car now at the parking spot with the heater on. Think I’ll pop into the Harrington Arms for a pint on the way home!