Tested my bandpass filter on Mow Cop today. The results were excellent. I could not hear stations calling me until I had the filter inline. The loss on TX was noticable but not severe.

bandpass filters - advantages: can be small and light, only pass 2m - reject everything else. Disadvantages: small filters have significant passband loss. VSWR deteriorates at band edges. More complex to make.

Tested my bandpass filter on Mow Cop today. The results were
excellent. I could not hear stations calling me until I had the filter
inline. The loss on TX was noticable but not severe.

Always though it a crying shame, Mow Cop doesn’t qualify as a SOTA summit, Richard.

Always though it a crying shame, Mow Cop doesn’t qualify as a SOTA
summit

Cry no longer: it counts for the new HuMPS award that the Summitsbase team have/will/may launch(ed).

Interesting. I can think of a couple of summits where that would be useful. Nearby (very nearby) Cleeve and also Brown Clee spring to mind. What configuration of filter did you use? 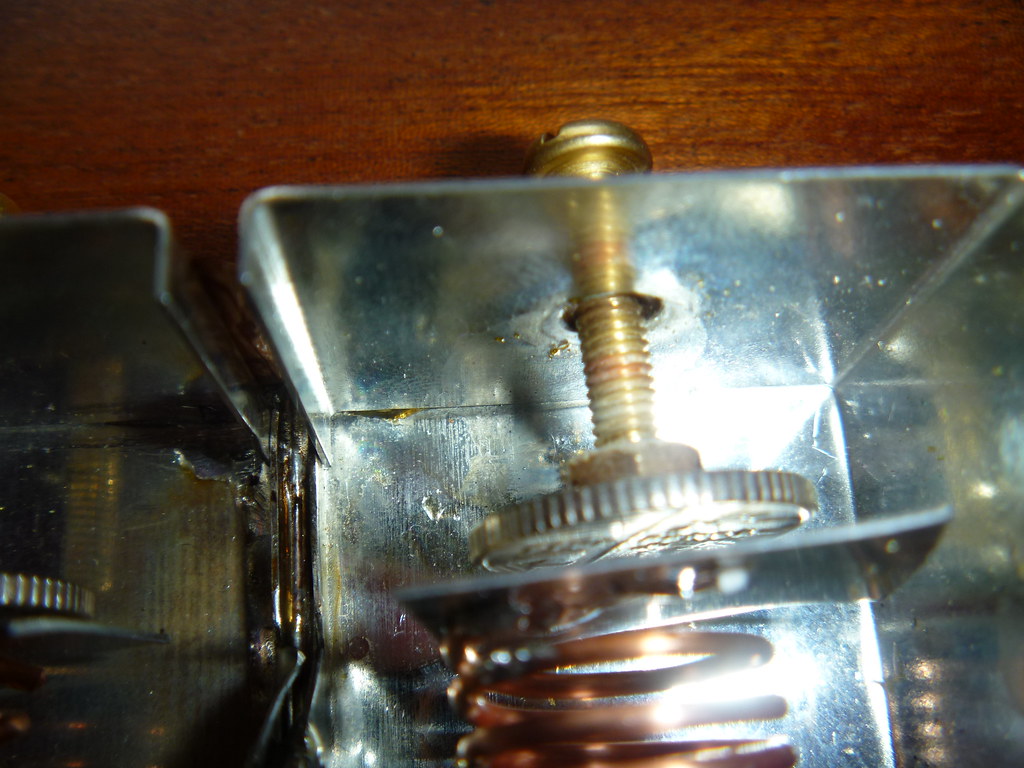 32dB looks like a very useful rejection of 152 MHz. It’s on receive only?

I had to take the FT-817 on Sunday as my FT-50 HH falls over within LOS of the masts. The HH would have been much more convenient on the horse.

I suspect that the silver plated titanium cavities you will build will be better!

In reply to G3CWI:
I’ve just found a what looks like a 5th order helical filter it measures
80mm by 60mm by 290mm and weighs in at 1.5 kilos, however it has a means of varying the coupling between the sections, this consists of a slot in the adjoining wall with an adjustable screw (similar to your tuning caps, but without the 5p,) that partially blocks the slot as it is screwed in. I’ve had a quick play,I had to lengthen some of the tuning screws,so I presume it may have been designed for 148MHz.The bandwidth down to about 20db is about 1MHz, (I cant measure beyond 20dB, I don’t have any more attenuators that I trust) but the vswr is below 1.5 to 1 from 145MHz to 145.5 MHz and being able to vary the coupling made a considerable difference to the vswr
The helical resonators are about 1 inch in diameter, and the wire is about 6mm diameter. I didn’t notice any difference in signal strength on received signals so I presume less than 6dB loss through it .I realise that this is total overkill but thought the coupling adjustment idea might be useful.

I have a vague recollection of making and using a shorted stub filter on 2m, but I don’t recall why and I can’t find any references to what I had. Maybe someone can fill me in and point me to the forgotten knowledge.

From what I recall there was a T-piece 1/4 wave from the rig from which another 1/4 wave in the form of a stub hung. To tune the stub a strong signal was set to be received at the band centre, the stub was added and then trimmed an 1/8 of an inch a time until the signal was nulled out at this point the stub end was soldered to short out the stub and the open end taped over to insulate it.

Please feel free to tell me I have it all wrong or should know better but for the life of me I cannot recall the why just the doing it.

Steve GW7AAV who is sure he has forgotten more than he knows.

A co-ax stub would have nowhere near enough Q for this application. You have forgotten what you are remembering! Removing inband signals is the realm of circulators and six very high Q cavity filters - not a bit of co-ax.

What I am tying to remember is why I made and used the stubs. I am sure I should know but I can’t think. More complex stuff I would have had to follow plans and read up anyway (and did in the dim and distant), but what I was doing made sense once.