A SOTA activation is always a little adventure as you’ll never know what’s gonna happen. I walked through dark forests with thousands of glowworms and startled boars after first-Tuesday-of-a-month-contests or bumped into hunters and crazy conspirace theorists who wanted to discuss stuff like HAARP and chemical trails. But I’ve never seen anything like this.

Everything started schmoove. I built my shack on the foundation of an ex-viewtower what gave my vertical additional 5 m above ground. There is no rail and you better don’t fall down the large holes in the concrete. 20 m was full of stations so I tuned to 17 m SSB and after a self-spot I worked Don G0RQL (as always a big signal) followed by W0ZAP and N4EX with good signals. Then no takers anymore for some minutes and I returned to 20 m. After tuning the antenna I noticed this guy entering the scene: 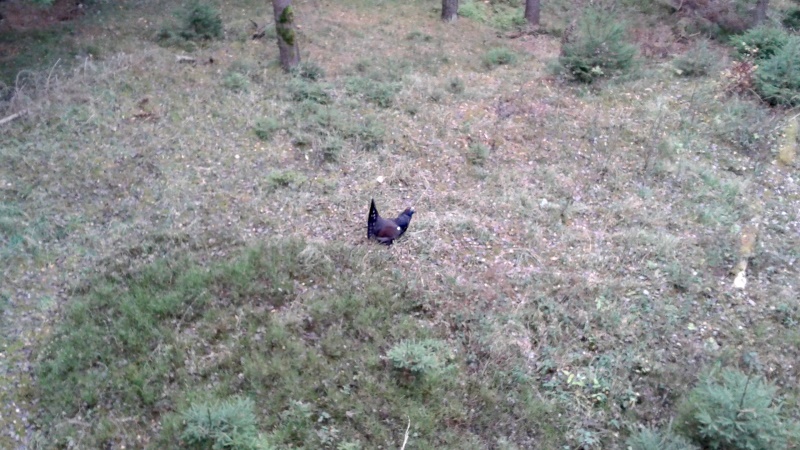 A proper capercaillie on display! They’re really rare in the Schiefergebirge (as in the complete DM association) and so I wanted to take a better picture of him - stepped down my shack and kept a reasonable distance. 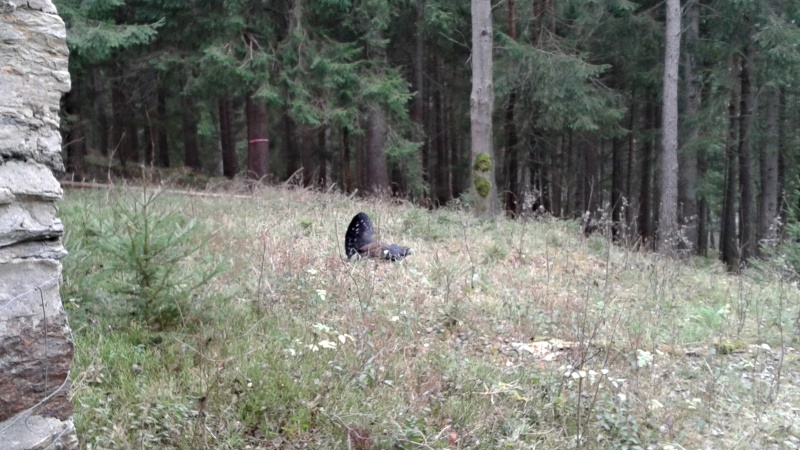 After I took the picture the capercaillie started runnig towards me. Time to leave him a few meters and so I moved 20 m down the slope. He still followed me and when he started running to take-off, I started running, too. Air attack! He hit my head from behind! I ran for another 50 m to the next crossing of the forrest track and walked that track down a bit. He stayed where he crashed into me, obviously looking for me. Good I know an expert to give advice in such a situation and so I called my YL Ilse as she’s a vet: “Don’t kill it, they’re protected by law!” Wow, this was the kind of advice I really didn’t need. I didn’t want to kill it. I just wanted to get rid of this bloody cock! 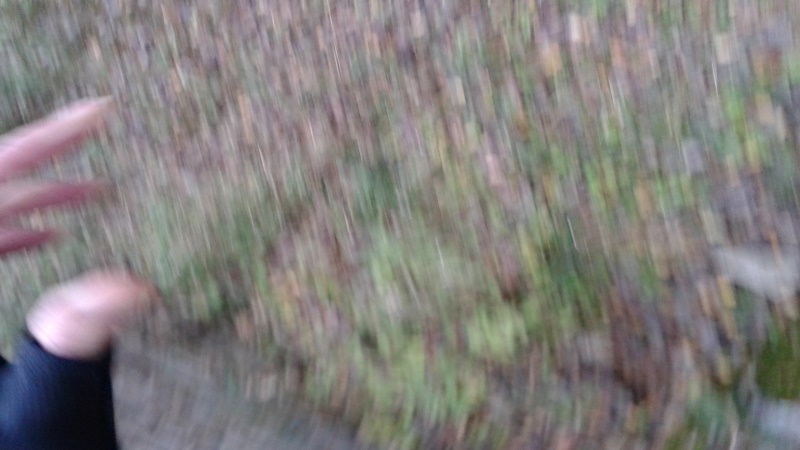 My station was still deployed and I wouldn’t have left without her. So I made my way in a large circle through the woods, hoping to reach my shack without drawing the capercaillie’s attention towards me. No way, he noticed me and instantly started another attack. “I’m not interested in your hens, I just want to get my radio back!” Again, he attacked from the air. It was obviously no good to run away again and leave my radio for an undefined time. But what should I do without doing harm to this capercaillie flying straight towards me?
Doing what?! I was quite impressed by this huge bird attacking me and almost forgot to raise my fist when he was only a metre from me. Strike, I hit his chest and the impact made him stumble to the port and crash down into the woods some 5 m away from me. That’s it, I thought. Now he’s learnt his lesson and I can go and pack my things.
Not particularly! He got back on his feet, came over and started another attack! He was really begging for it and I didn’t know what to do, so just slapped him in the face with my right hand. He didn’t stop. Another slap in his face , this time from the left. He stopped attacking me, looked a bit surprised and stumled away into the woods. Phew! But will he return?

Back in the shack I remembered that I’d made only three contacts, so one more qso to go! But what if the capercaillie returned and attacked me again? Not the best place to defend against a mad bird, 5 metres above ground with no rails and holes in the ground. Doesn’t matter, make one qso! And luckily, I instantly found two stations wishing well and just gave my callsign. OH9ENA/m came back and was #4. Ha! After completing the qso I packed my things as fast as I could and left. The mad cock didn’t return. But with my head still full of adrenalin I twitched with every noise out of the woods while descending. However, the most dangerous animal I saw on my way back was a black squirrel.

Activators, beware of a mad capercaillie on Quittelsberg DM/TH-844 during the next weeks and in April/May 2018 when he’ll probably return for the mating season!

Wow - what an adventure! I suggest that you link your report to the summit database to raise awareness among future activators.

Hi Pom,that was some experience.Good to hear you came out ok in the end and qualified the summit also.
Hopefully no one will have the same problem on the summits its bad enough when you get an irate
farmer or walker most of which wouldn’t attack you and go away afterwards but to have him return with even more aggression would be quite an issue. Take care.73 Don G0RQL.
In the safety of his shack!

I have seen your 17m spot but of course on 17m I was within skip distance. Interesting to read about your fight with wildlife on Quittelsberg. I have activated this summit several times but never seen larger animals there.
I have seen foxes several times and deer or boars escaping once I came nearer on other summits. Also mice running across my station. I do not know whether the ants I met on several summits actively attacked me but I was never attacked by an animal as large as a capercaillie.

I built my shack on the foundation of an ex-viewtower what gave my vertical additional 5 m above ground.

I was very careful on top of the ruin as the concrete can collapse once you step on it. Looking up to the ceilling when you are in the room below you see how damaged the steel support and the concrete in between are. Last year authorities have set up fences to keep people off the ruin. I do not know whether they are still on site.
The last activations I did in the forrest at the exact top of the summit. There is also a sign with name and height at this place.

After I took the picture the capercaillie started runnig towards me.

This was the error! The capercaillie did not want somebody taking pictures of it

If you had deleted the picture in its presence it would have stopped attacking.

Also worked for me in Saudi Arabia one time: When I was doing a small privat sight-seeing tour in Jeddah I discovered a beautiful HF logperiodic on a building from the other side of the street. I only had eyes for the antenna and could not resist taking a picture of it with my mobile phone. Unfortunately after taking the picture I also saw some kind of soldier with a gun at the gate of the building. He was waving indicating I had to come to him. The presence of his gun made me obey. He told me taking pictures was prohibited. We agreed I delete the picture in his presence and was allowed to leave without any further consequences. Propably the logperiodic was on some kind of official building like an embassy. I was so delighted I got away I did not check what building it actually was.

Good to hear you came out ok in the end and qualified the summit also.

Almost ok except a minor injury of my tibia after I tripped over some cut-down limbs while running away.

After all, the lust for six points was stronger than the fear of the capercaillie returning.

BTW, seems there is a serious issue with ‘RF on the mic’ with my station. I’ve got more reports noticing my distorted modulation on 18 MHz. Hopefully, I’ll find the reason soon otherwise I can only run 25 W on 18 MHz. But its one of my favourites…

I was very careful on top of the ruin as the concrete can collapse once you step on it. Looking up to the ceilling when you are in the room below you see how damaged the steel support and the concrete in between are. Last year authorities have set up fences to keep people off the ruin.

Absolutely, you better be careful there and need good judgement. In my other hobby I’ve seen lots of abandoned buildings and ruins. One wing of such a building collapsed only a few weeks after I was there but didn’t go in as I didn’t have confidence in the structure anymore. For a single SOTA operator not moving heavily, I consider the top of the stairs a save area. However, I would’nt invite a number of people to a SOTA party on the tower foundation.
I didn’t climb any fence. Close to the tower there is some damaged sign with a red frame, but I couldn’t read it from my way.

ACF: After I took the picture the capercaillie started runnig towards me.
7MM: This was the error! The capercaillie did not want somebody taking pictures of it

You may be right.

Just watch the facetube videos (search for ‘capercaillie attack’)! They all get more angry the longer they are on cam!

I was never attacked by an animal as large as a capercaillie.

Hihi, Ilse once found a small snake what -at a first glance- she thought was a garter-snake and grabbed it. In fact it was a very young adder. It tried to bite her in the finger but it had so tiny teeth it couldn’t get through Ilse’s skin! Brilliant!