The forecast wasn’t good and we awoke to persistent rain, with a forecast for the rain to ease north to be followed by showers with cloud persisting on the higher hills. We decided to head south towards Dumfries towards lower hills.

We had hoped the rain would have stopped by the time we had done shopping in Dumfries, but it was still raining, but not as heavily as earlier, when we parked in the layby on the A711 around NX918718. We togged up in full waterproof mode and headed SW on the road verge to the track to Woodhead: less than pleasant on the high-speed road. We turned left before Woodhead to head towards Mabie forest, turning right onto the forest track passing several areas of bluebells. The rain eased further as we walked through the forest, with some felled areas. Spotting a wall on the left with a faint path beside it next to a felled area we decided to head upwards to try to locate a forest track shown on the map which we estimated to be just beyond the felled area. Unfortunately, there was little sign of the track where we expected it to be: hints of where it might have been but with trees encroaching on it and some fallen trees. There followed a frustrating section of slowly fighting our way through trees and brash until we stumbled upon a mountain bike track. Having heaved a sigh of relief on finding some easier walking we were disappointed when it started heading downhill, so we left it to head through some slightly more open trees, but still difficult ground. Eventually we came upon another mountain bike track which quickly brought us to the summit area. The summit consists of a large felled area with lots of stumps and brash. Caroline found a suitable stump to lash the VHF antenna to above the track while Martyn managed to find somewhere to put the HF antenna below the track where the felled area was slightly less hostile.

Thankfully the rain has stopped, so we could set up without everything getting wet. During the activation there was some drizzle and light rain, but we managed to keep the radios dry. We needed HF as once again Caroline only got 3 contacts on 2m: the second and third coming half an hour after the first! Qualification was achieved with 7 contacts for Martyn on 60m and 11 for me on 40m, including 2 S2S for both of us. 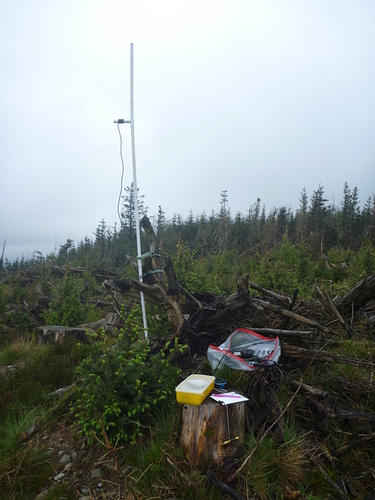 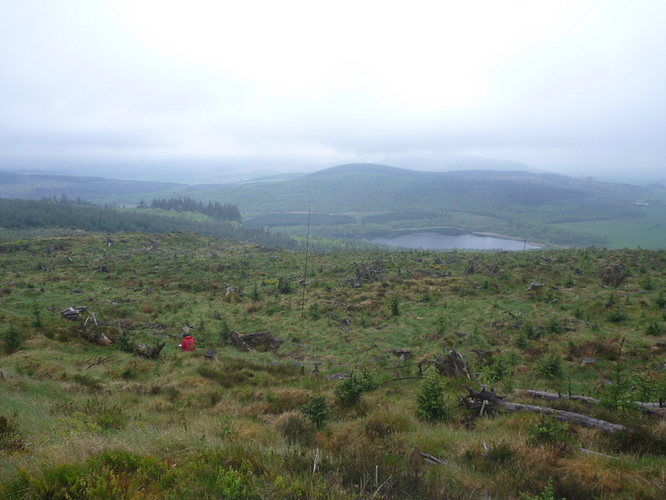 With lunch eaten we wanted to find an easier way down. We spotted a vague path that looked like the remains of an old ride heading down, but it soon decomposed into more felled brash. We made our way through more of this heading towards an area that looked to have been more recently clear felled. When we got to that area it was slightly easier going, though still with stumps and fellings to be negotiated. However it relatively quickly got us down to the forest track that runs round the bottom of the hill, with easy walking back out of the forest.

Our second target was Killyleoch Hill. We had two possible routes for this one and the easiest looked to be the approach from the west from Killyleoch Farm. There were reports that the farmer was happy for people to park by the farm if asked, but we could not find anyone to make contact with at the farmhouse or farm, so resorted to plan B, following the route described by Andy MM0FMF.

We parked at the start of the drive around NX881801, admiring the bluebells in the wood. We headed up the drive, through the woods around the back of Newtonairds Home Farm, and then through the field where Andy suggested looking inconspicuous: a bit hard when wearing rucksacks with bright red covers and antenna poles sticking up! However we saw nobody and carried on along the track as it skirted woods before turning left through a gate and over a bridge to another field. Here we headed diagonally across the field to a gate with electric fence which we negotiated to save trying to climb a wall. There was another fence to cross as we headed up towards the trees, where there was an easily crossed wall, soon to be followed by a higher wall which proved a little more challenging for our little legs, but was managed with care.

There was one more wall to cross to the true summit, but as time was getting on and the terrain looked more favourable for HF in the field where we were, we decided to set up there since it was well within the activation area. Caroline set up VHF but failed to get any contacts despite lots of calling. Martyn had a reasonable run of 15 contacts on 60, so Caroline took over the HF dipole to qualify with 5 contacts on 80m: a move to 40 generated just one contact, and 20m none at all! 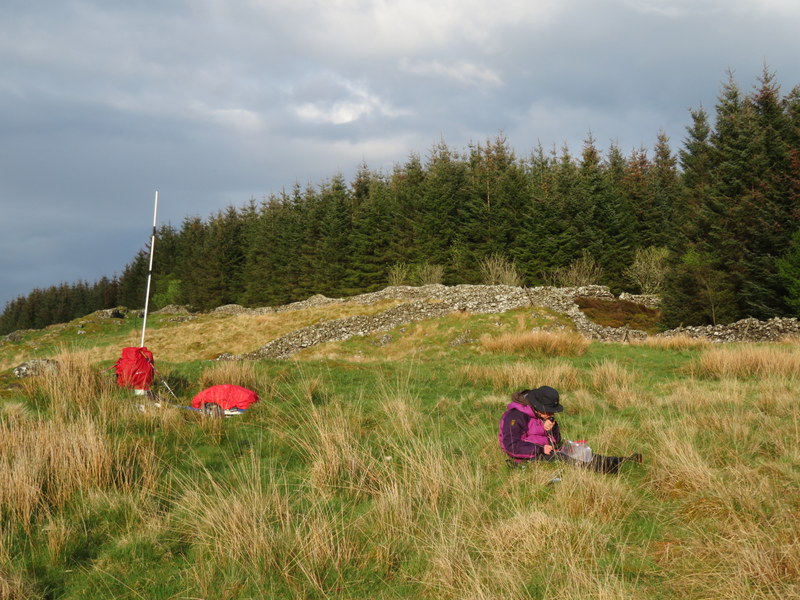 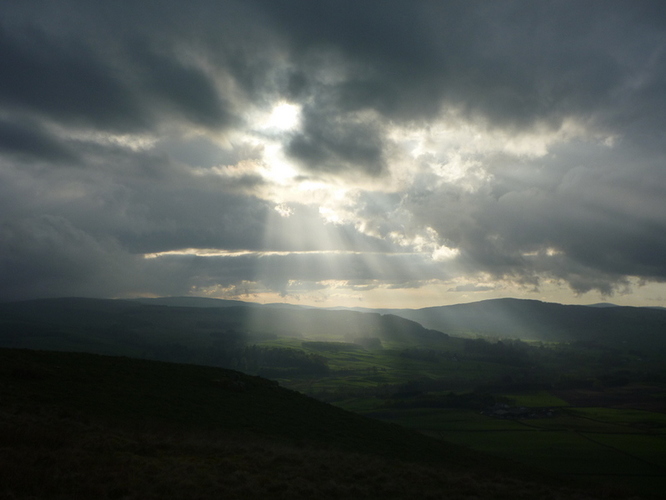 While we had been on the hill there had been some dampness but as we were packing up the clouds split to leave some fine evening views. We descended via the same route, again without seeing anyone else.