So new to the hobby both SOTA and amateur radio I have few points and little experience. I do a fair bit of walking although I’ve been a tad lazy the last year or so. Having cracked a few 1pt’rs around me I continued to another nearby on the banks of Loch Tay. Drummond Hill GM/CS-114 sits in Tay Forest Park looking over Loch Tay and the nearby town of Kenmore. The hill is an ancient forest replanted in more recent times. Drummond Hill is marked with signs coming in to Kenmore and there is good secluded parking at the trail head. There are three significant paths around the hill but you could make up your own walk using parts or all three. I elected to follow the paths up to the top and west of the peak. The paths are wide to allow wood harvest vehicles up and down but are steep nonetheless. The woods are thick and the path offer little views. I did have hopes that the viewpoint would provide great views along Loch Tay but it was not to be the only view was down onto Kenmore and the hills to the south east and a sad view of the charred remains of the Scottish Crannog centre. 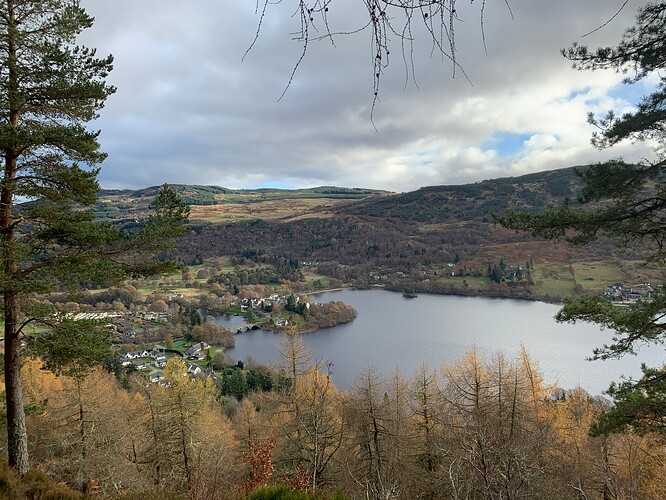 IMG_8544 22016×1512 1.48 MB
I knew there had been felling on the top but I didn’t know to what extent. When I arrived at the top of the path I stepped off it and made my way across a felled area, hazardous in itself. The top of the hill was still covered in trees and sprouted above the felled area like a wart. As I walked towards the treeline I used the stone dyke as a nav handrail it carried all along to the peak and beyond. 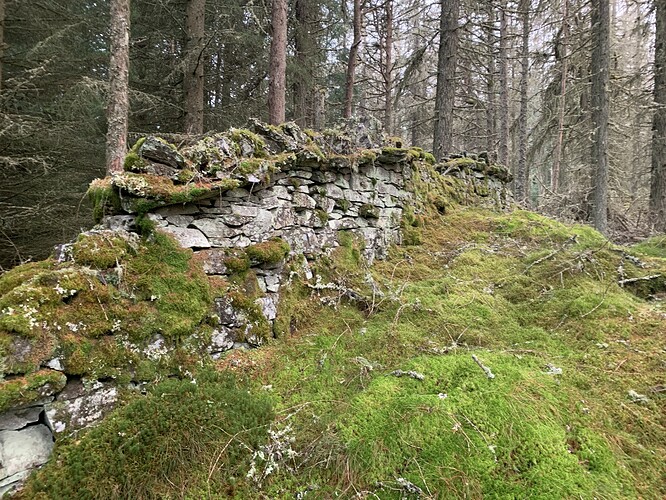 IMG_8559 24032×3024 3.73 MB
I tried to judge the best side of the wall to follow I elected to follow it along the southern side as there appeared to be some kind of path up the steep treeline. I chose wrong. 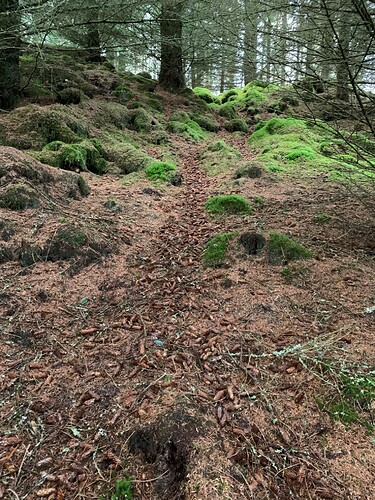 IMG_8546 21512×2016 1.36 MB
The trees were thick and the ground soft everything was green, it was hard bloody going. I did come across a ruin of a house, I guessed from the fire place that’s what it was. Hardy living up there even if it was a shepherds bothy. 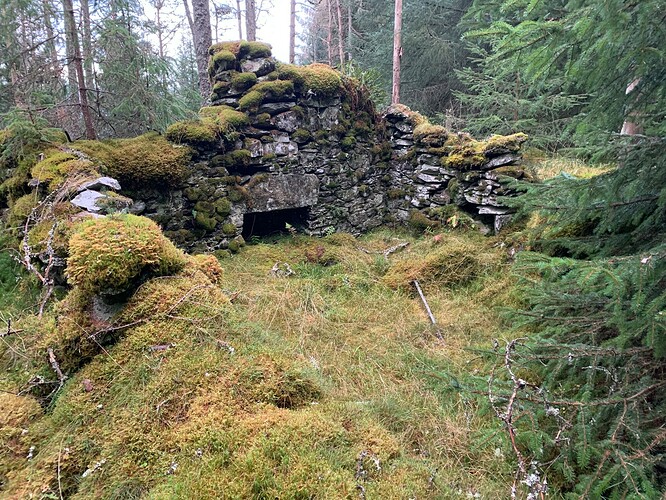 IMG_8548 2.PNG1242×2688 389 KB
I started on 40m getting a few calls before I started to get routinely talked over. I chopped to 20m where it was definitely quieter. Calls including S France, Spain, Switzerland, Poland and Austria. All on a SOTABeams Bandspringer. I’m constantly impressed with the performance of the TX-500. 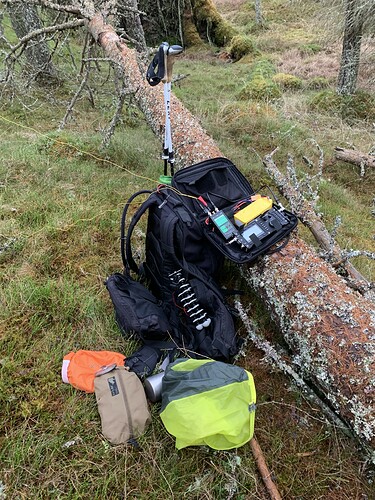 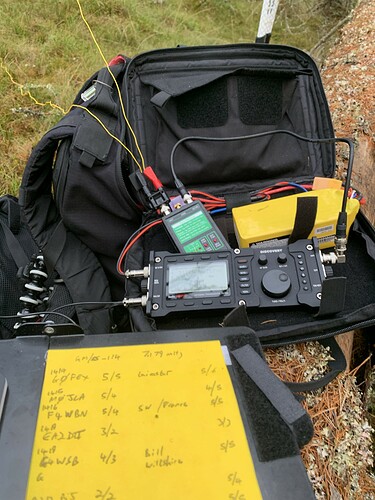 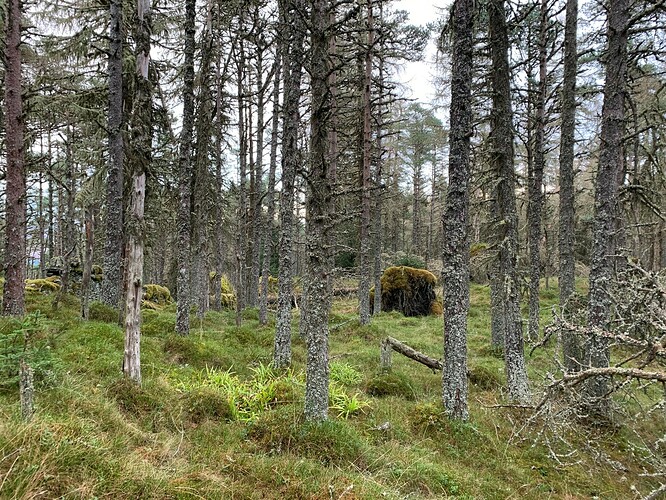 IMG_8554 22016×1512 1.5 MB
So much for so little power.
I packed up to get off the hill before dark and started to make my way down. Having had a carppy experience on the way up I elected to go down on the northern side o 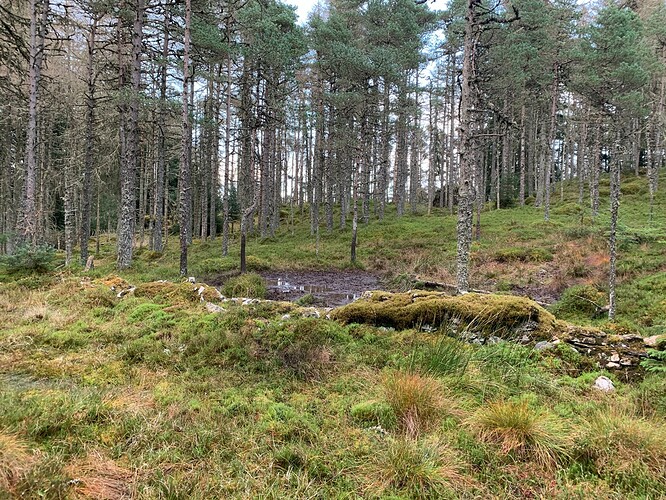 IMG_8556 22016×1512 1.47 MB
f the wall. This was by far better and whilst I didn’t see any I did come across a deer spa.
Lots of deer hair in amongst the mud. As I crossed the harvested area I turned north on the path for a few metres to look at the mountains to the north. I hope to get them on the activation 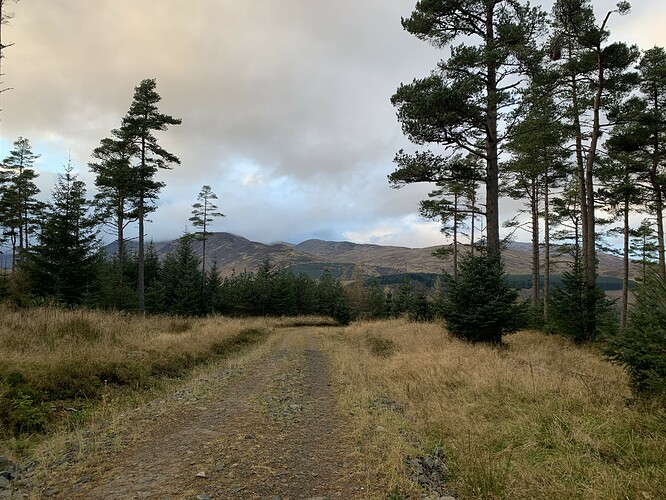 IMG_8561 24032×3024 3.19 MB
list soon, maybe next spring.
Would I jump at doing Drummond Hill again? No. There’s definitely easier 1 points to gather with more attractive viewpoints either at the top or along the way. Still and all I’m learning how it all works, enjoying myself, getting outdoor exercise and getting a few repeat Chasers. Thank you one and all it was only when I looked back at my log I realised there were a few regulars. Cheers Ken in particular.
18 Likes
MM0FMF 23 November 2021 19:29 #2

There used to be a cairn at the summit. 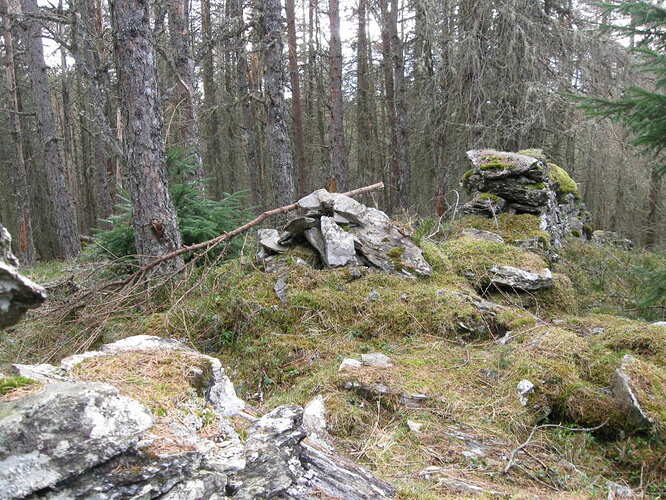 North side of the wall is best ISTR.

I thought it was a cracking wee hill but I like forests. Worth doing for the view of the Glen Lyon horseshoe summits. But it depends on what it’s like now there are fewer trees. 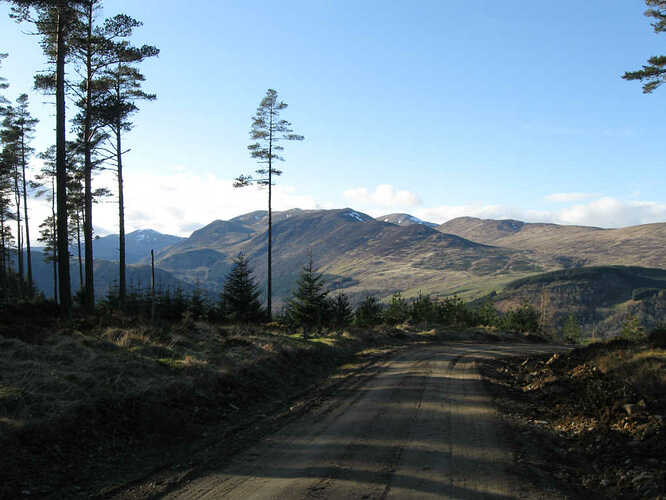 I saw no cairn. Panic setting in. Oh your picture just came up. I think I did see that but just thought it was where the wall had fallen down. I like forests myself but I wasn’t sold on it. Views to the north are just fantastic. Maybe next year.

Good effort! Not been up there myself, but semi-destroyed the underside of a 2 week old audi S3 quattro on the forest track that contours the north side.
It was the Colin MacRae rally, with Colin, Alastair and dad Jimmy all out in mkII Escorts. I was marshaling and got a bit carried away on the run through to my junction.

Well done on the activation and report Paul. Hope we can work each other tomorrow (by radio rather than WhatsApp

Nearly bought one of those. All the “1 careful lady owner” models were manuals and all the DSGs had led a hard life. Started looking at RS3 or RS5 till sense took over. That RS3 2.5L 5cyl does sound special, takes me back to the first RAC Rally when the original Audi Quattros came on the scene. Anyway an S3 went past me up the back lanes the other week when I was out with the dog. He was giving it a hoon as it went on to make assorted DSG f*rt noises. I could hear him popping and banging for the next 5 mins. Hooligan!

Views to the north are just fantastic

Yes. When I did it I had been hemmed in by quite mature trees apart from the viewpoint at Black Rock. Onwards and upwards till you get to the top and then you suddenly get the view opening out over Glen Lyon horseshoe and Schiehallion etc.

Many thanks for the excellent report Paul. The photos are brilliant. I don’t have this summit on my “GM to do” list because there are others easier to reach from the “Northumberland launch pad” that i use for GM activations. However there are many challenging aspects to the hill that have a certain appeal. Maybe one to add to the list as a multi-summit summer day out.

If it’s challenging try GM/SS-149 but wait until it’s been wet. I’m a short guy and bushwhacking through waist/chest deep wet tussock grass was grim. The shorter grassed slopes seemed to be full of holes perfect to crack an ankle and the top was boggy. There were nice views, 2 points and a chance of seeing red kites though.

Been there, done that, but haven’t got the teeshirt as the ground wasn’t that bad in February 2019. Nice hill, if you avoid the damp spots on the summit. 5 points with the winter bonus!

If you want to experience tussocky grass at its best, get yourself south to Galloway. It’s fearsome on some summits!

If you want to experience tussocky grass at its best, get yourself south to Galloway. It’s fearsome on some summits!

Long, long ago near Merrick, I believe, in my youth I (and my rucksack) got stranded on top of a tussock I had stumbled over. Neither feet nor arms would reach the ground … and all Rodney was do was laugh! Eventually he realised I was stuck and getting madder by the minute… and that it was in his interest to recue me. I think that was the time we camped in Glentrool campsite and I locked myself in the car (on purpose!) and let down the window by an inch (we had them in those days) to receive the plate of food … The joys of August in the headquarters of midge-land. Not so long ago we met a youngish resident of Glentrool who said they were still biting in January/February so there is no off-season there!

(Thinks) I wonder what Mull in June will be like … - IF we get there this time!
Viki M6BWA

I can’t say I’ve ever been stuck on a Galloway tussock, but those on Cairnsmore (Black Craig of Dee) GM/SS-170 had some foul smelling black liquid between them. I did try tussock hopping which wasn’t very successful and could have resulted in a twisted ankle.

The joys of August in the headquarters of midge-land

Indeed, Neil 2M0NCM and I got feasted upon in September 2013 after activating Craignaw GM/SS-096 and Craiglee GM/SS-150. Thankfully Neil knew of a great pub to eat at down the road which helped ease the pain.

(Thinks) I wonder what Mull in June will be like…

Well it was reasonably okay in May 2016. Just had to avoid biters of a different kind… I was awarded with my one and only tick to date.

(Thinks) I wonder what Mull in June will be like