Hi, on 15 August 2018 will try to activate DL/WS-001 and on 16th the DL/WS-022.
I will have the Baofeng UV5R with me and try to get the KX3 + EFHW antenna but not sure if there will be enough space to raise it.
Any advice from the fellow activators that did this 2 summits ?

Hi Petronel,
I can’t comment on DL/WS-022 Alpspitze but in the case of DL/WS-001 Zugspitze, the very summit with the cross has NO space to set up any station and is very busy however as the mountain station with its multiple lifts is also located on the top of the Zugspitze, sitting across the border line of Austria and Germany, setting up on the platform does count as being in the Activation Zone and there a mast can be strapped to the safety fence around the edge of the platform. (The platform on the Austrian side has more space and less people normally). The biggest problem with activating Zugspitze, if you are not going to hike & climb all the way up from Garmisch is the cost of the cable car. I think it’s around €60 ! 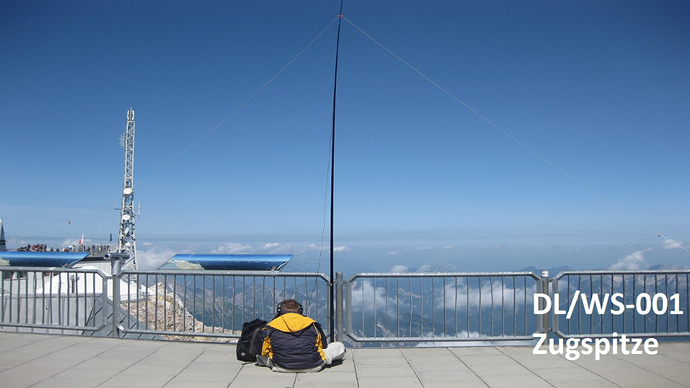 P.S. your UV-5R will give you coverage over all of Bavaria and Baden Wurrtemburg from the Zugspitze.

I will go from Austria side, using the Hiking ticket “Gatterl” for only €38 per person. My wife loves to hike, so going up and down by cable-car isn’t an option.
I was just reading your activation report on your website. If I can get my 40/20m EFHW working I might give it a try. If not, a monoband dipole or vertical for 20m.

concerning your plan to activate the Zugspitze, the available space might be a real problem, especially on weekends or public holidays (i.e. also Wednesday 15. August). Via this panorama you can get an impression how crowded the summit and the platform might be: 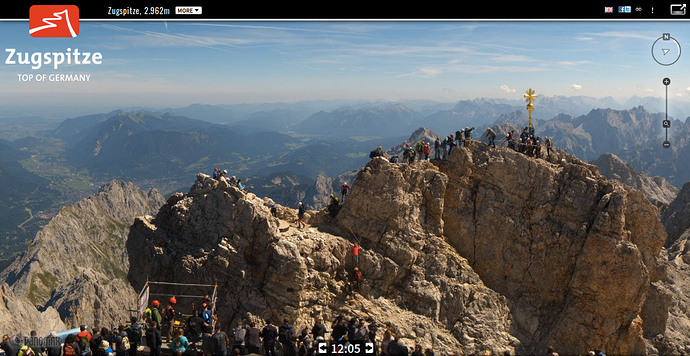 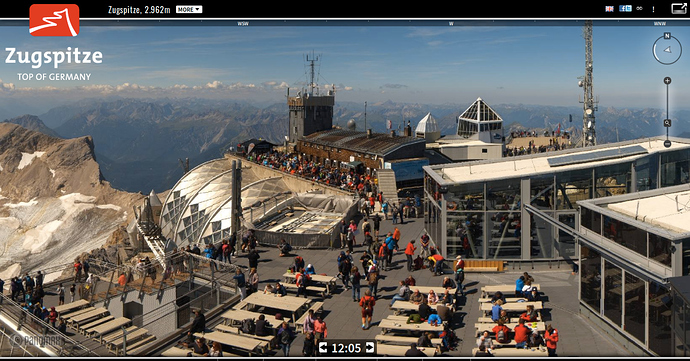 Concerning your planned activation of the Alpspitze, the summit can only by reached by climbing of Via ferrata’s. They are not very difficult, but you should be prepared that they aren’t simple hiking paths. Here is a youtube link to get some impression about the way up and down the summit of Alpspitze:

The Alpspitze is also frequently visited. An impression of the activation area of this summit can be gathered from the following panorama on google maps:

Have a nice holiday and enjoy your activation!

Thank you very much for the information. Today, even at 9AM, Zugspite looked a bit crowded. Probably on 15 August, will be worse, but can’t change the dates now

The video for Alpspitze Ferrata is nice. I’ve expected a grade B, 600hm, 2h climb, 2h descent. The initial plan was to go with the first cable car, climb Alpspitze and get down to Griekarscharte - Höllentalangerhütte- Höllentalklamm and back to the parking… but that might be a bit too much, 10-12 hours, and could not found much info about that descent.

Today, even at 9AM, Zugspite looked a bit crowded. Probably on 15 August, will be worse, but can’t change the dates now

Hi Petronel, As Stephan said Wednesday 15th. is “Maria Himmelfahrt”, a public holiday, so yes, all attractions in Germany will be busy on that day. You would have been better with Tuesday or Thursday for Zugspitze. The German side of the platform tends to be more busy than the Austrian side, so you may still find some room there. Try to get up on the early lift - the first one is from 08;40 local time. It will start to fill up after 10 am.

UPDATE: I see you’ve alerted that you’ll be getting the first car up from the Austrian side - so you should be fine with missing the worst of the tourists.

concerning the Zugspitze you should follow Ed’s DD5LP advice. In the meantime he has better knowledge of our localities than we Bavarian aborigines

For the information about the Alpspitze Via Ferrata you are perfectly right. There is a short section rated with grade B at the beginning and the rest is mostly grade A or A/B. But generally lots of people climbing up and down.

For the descent from Alpspitze via the Grieskarscharte down to the Höllental you have to look for the Matheisenkar Klettersteig. A via ferrata rated B/C, therefore a bit more difficult than the Via Ferrata that goes up from the Osterfelder. Here is a youtube video I found:

For a descent it has the downside that you have to take into account opposite traffic from the climbers that are climbing up via this Matheisenkar via ferrata. Although this via ferrata isn’t as frequently visited as the Via Ferrata from the Osterfelder.

If you want to combine a visit of the Höllental with a SOTA activation, I’d recommend to have look at the GPS track that Martin @DF3MC has uploaded to the tracks page of the SOTA Mapping project. The related SOTA reference is DL/WS-011. You can even shortcut the way up to the Riffelscharte by using the cog railway that starts at the Eibsee.

Have fun and stay save,

If i activate from Austria side, should I use OE/YO8SEP/P from DL/WS-001? Will this create some confusion?

@DM1LE If I understood right, going with the cog railway to Riffelriss then hike to DL/WS-011, then follow the track of @DF3MC back to Hammerbach. Do you know where i can find more info about the cog railway, prices /time ?

the prices for the cog railway can be found here:

Unfortunately only in German. But there is an One-Way-Hiker ticket just up to the Riffelriss “Riffelriss Fußgängerkarte”. That’s 14€ for an adult person.

The corresponding timetable can be found here:

The cog railway starts at the Eibsee, That’s the the same location where the German cable car up to the Zugspitze starts.

And as far as I remember there is either a shuttle bus or a train that you can use to travel between Hammersbach, the little village nearby the Höllentalklamm, and the Zugspitz station at the Eibsee.

Edit: Just found a nice activation report from @DL4ROB who did the route just the other way around:

Hi all, this week I managed to activate “Riffelspitze” (DL/WS-011, 2262 m above sea), which was my first 10 pts summit. I started at the village of Hammersbach (758 m above sea), passed the very nice “Höllentalklamm”, and reached the summit after a hike of more than 4 hours. I have qualified the summit only with my HT (Icomm T70), and a telescope antenna. Below I want to share some pictures. 73 de Robert, DL4ROB Impression from the ravine “Höllentalklamm”: [image] I had a small rest at …

It may create some confusion, but it would be correct to use OE/YO8SEP/P from DL/WS-001 if you go past the border sign to set-up.
Both platforms halves are considered to be in the AZ.
You’ll need to make the call once you are there.
Since you will be there so early you should be able to set-up on the German platform facing the cross, then you can use DL/YO8SEP/P.

The corresponding timetable can be found here:

The cog railway starts at the Eibsee, That’s the the same location where the German cable car up to the Zugspitze starts.

From the timetable there seems to be a possibility from Hammersbach at 08:27 arriving in Riffelriß at 09:00