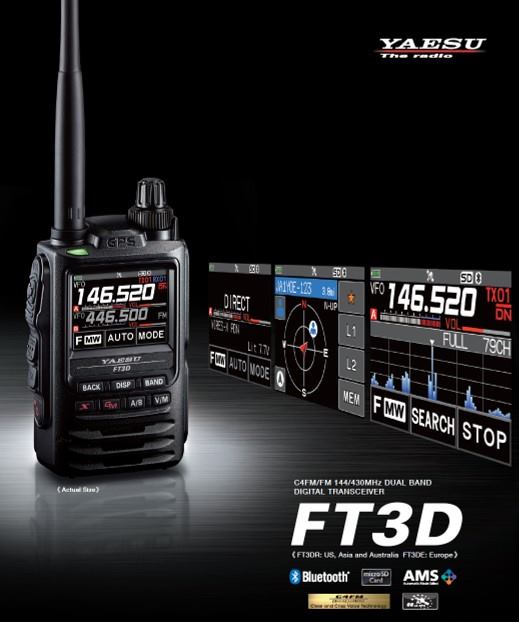 FT3D is the next Yaesu flagship VHF/UHF handheld; features a full color touchscreen display, Bluetooth and many other goodies already present on the FT2D.

looks ok, the only questions I have - and maybe some people at Hamvention could ask is.

Will it CHARGE by 12v or, like th FT60, merely be powered by 12v external but not charge.

My Kenwood HT does charge and I think its becoming almost the base that I would accept especially for overnight hikes etc.

And will the BT be for audio, or BT TNC or both? None?

Interesting. I would be most curious about the receiver performance. Particularly the ability to resist overload and its adjacent channel rejection. Those are critical for SOTA ops from a populated hilltop.

Given the specifications (broadband RX) I would not expect much. My FT2DR is poor.

I would like a handheld with ssb and cw…

Slightly offtopic: Richard, I put the FT2D and the venerable FT-60 side by side at an FM broadcast site. The FT-60’s front end was getting swamped by IMD while the FT2D was doing just fine, I had about 10 QSOs without any sign of an interference.

I was thinking we need some kind of standardised test for these SOTA VHF handhelds, as so far the whole community is relying on subjective / empirical data. Maybe mixing outputs from a Si5351 and some programmable PE4302 attenuators, etc.

Interesting. I would be most curious about the receiver performance. Particularly the ability to resist overload and its adjacent channel rejection. Those are critical for SOTA ops from a populated hilltop.

I sold a very expensive Yaesu VX-8GR because the front end was poor. Anything more than the stock rubber duck and it went into meltdown… That and the 125 menus which were driving me insane.

I agree Mike. Many of these newer Yaesu HTs (and other brands no doubt) are far too feature-driven and user-customisable for what any of us really need.

My current Yaesu FT70D and previous Yaesu VX7R are both pretty decent radios, but fiddly to program and have an annoying menu-adjusted squelch (rather than a dial). Both have enormous menus.

Jimmy’s old Yaesu VX-110 is a bullet-proof simple 2m FM HT. It is only detailed stuff (memories etc) that you need to go into the menu for. The day-to-day operating facilities are all on the case of the radio. For the SOTA activator who probably has an 817 / 857 / KX2 in the rucksack anyway, an old VX-110 is probably the only handheld you’d ever need.

The ability to spot via APRS has saved a few activations for me. I find it a very useful feature on remote summits where I have no cell service. I have an FT1D and it struggles on summits with a lot of RF. Turning on the attenuator helps.

I will have to check out the FT3D. I hope they improved the UI! I played with another Yaesu touchscreen HT and didn’t find the touchscreen to be particularly well utilized. I would say that UI / UX is not Yaesu’s strong suit =)

Only for receive SSB CW use Kenwood old TH-F7 …

I’m still using, and still very pleased with, my FT1D for SOTA activations, i.e. for simplex FM and C4FM QSOs.

Is the basic radio any better in the FT2D and FT3D? Am I missing something?

Am I missing something?

It’s likely you have a specific set of needs which is why you see no real benefit of the new handhelds. My VX170 is 2m FM only and 11years old. It does exactly what I need for SOTA. If it ever fails or I lose it then I think and FT-70 is what I’ll replace it with. The C4FM Fusion and 70cms are not selling points to me but are nice to have. The only reason to buy one is it seems to be tough (Tom hasn’t broken his yet) and works well in places by commercial transmitters. So it’s a fine SOTA radio (other fine radios are available).

And despite my still using an iPhone 4S, I do appreciate manufacturers need to bring out new / enhanced / improved models (be they radios or running shoes) to maintain sales and presence in their markets.

But there’s a theme here …. The BBC just forced me to ditch iPlayer for their new Sounds app.

Tom hasn’t broken his yet

I have, from time-to-time over the years, been used as a “potential new product tester” by a local purveyor of amateur radio items. The proprietor of that company has been quoted as saying “A Tom test is a good test”.

It seems my reputation precedes me.

Most of the bells and whistles on some of these handhelds are overkill for most SOTA activators. For many, the HT is an emergency/convenience option for communicating while walking, and/or a back-up to the main portable station carried in the rucksack. Therefore, a rugged and robust 2m FM analogue capability is all that is really required by the majority of us activators.

As such, the old Yaesu VX-110 still takes some beating in terms of build quality, performance and value for money. Jimmy M0HGY still has one.

I had the Yaesu VX7 for a number of years. The wideband HF to UHF RX (including airband and broadcast) was a fun thing to have, especially for catching up on the news during a lunch stop on the Pennine Way or nodding off to sleep (using the sleep timer) in a backpacking tent. But most of its facilities were never used, it suffered breakthrough from nearby transmitters, and the antenna connection on it was weak. It had 6m capability, but it was virtually useless, even when connected via a decent portable antenna.

The FT-70 is considerably superior at half the price. Plus has C4FM which opens up features that actually get used as opposed to remain redundant. The more avid SOTAwatch readers will be aware that I have reported consistent success with qualifying activations all over the country on 2m FM with a handheld in recent months. The handheld in question being the Yaesu FT-70D.

Then I use old FT817nd with inside LiPo battery …