The first Saturday of the new year offered up beautiful WX for outdoor activities, and I chose to use that opportunity to reach two summits on Stord Island (IOTA EU-055). This area of Norway is a great opportunity for those who want to do first activations, as there are few activators around, and many mountains to reach.

I also made a video report, it’s linked on the bottom of the article. 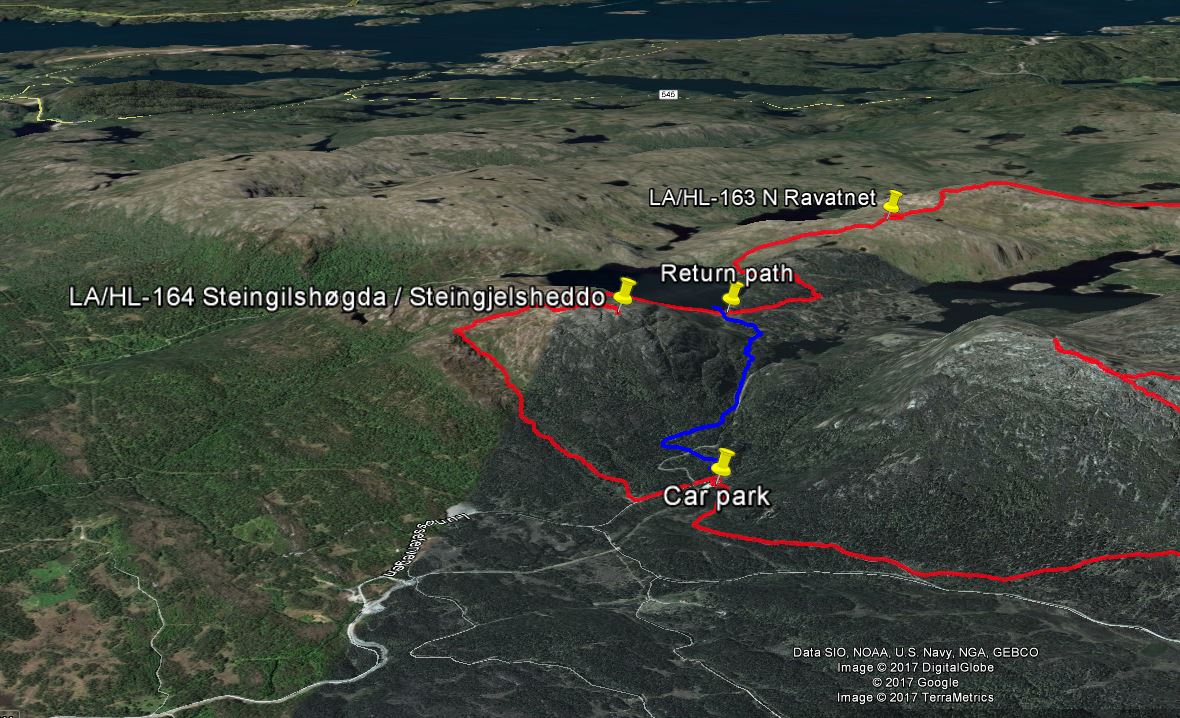 Map of the area

My primary destination was LA/HL-164 Steingilshøgda (Steingjelsheddo) 529 meters, with LA/HL-164 N Ravatnet (Unnamed summit) also 529 meters as a possibility depending on how long I spent reaching the first summit. The days are still short here, with approximately 6.5 hours of daylight.

The area had a network of very well labeled trails, and finding my way around would have been easy, even without maps. According to the online sources the trip to Steingjelsheddo should take about 1 hour. I reached the summit in around 1.5 hours, so the estimate was not too bad on winter conditions. Most of the way up went in a valley, while the rest was on bare mountain. The trail up was very good for the most part, with some exceptions where the mountain was covered in thick sheets of ice. This was easily negotiated with ice spikes on the shoes, but would have been an issue without. 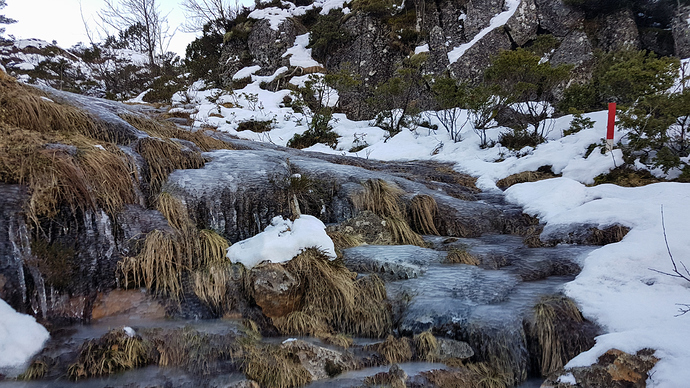 Before setting up the HF rig I got a QSO with a local HAM operator on 2 meters, which is always nice. I mounted my antenna by stuffing it into a deep snow dune, which provided excellent support. On this summit I activated 80 meters first to get some Norwegian QSO’s, before trying 40 meters for a very short time. 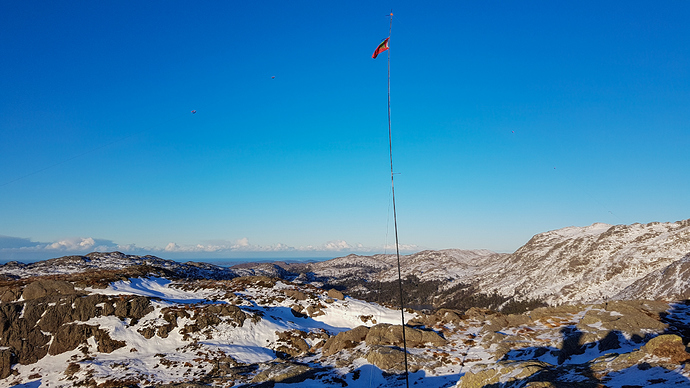 The trail to LA/HL-163 took me down a steep ravine, and down to about 360 meters, before I started climbing again. The trail here was a lot rougher and harder to read, but I believe this summit was actually easier to reach in winter than in summer, due to the amount of frozen marshlands I traversed. 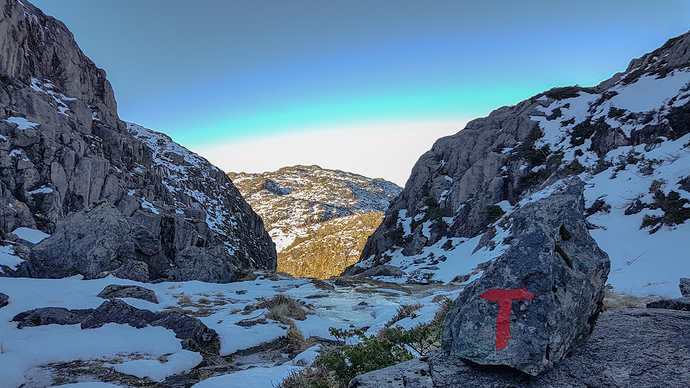 When I reached the summit I was able to make contacts on 2 meters and 70 cm with another local HAM. The rest of the activation was done on 40 meters, with 3 S2S qso’s in rapid succession and a total of 11 QSO’s. From LA/HL-163 I got a beautiful view over to LA/HL-164 and the sorrounding areas. 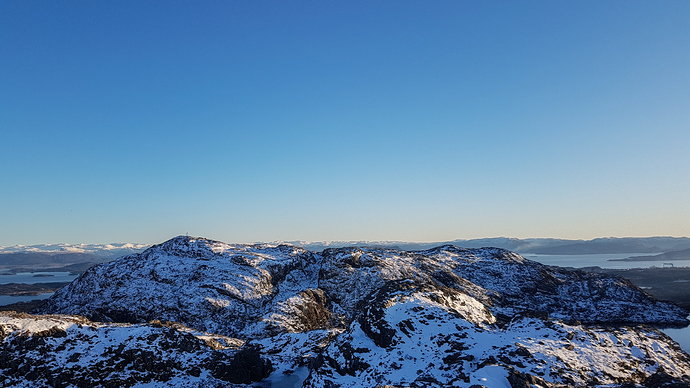 At this time the sun was setting rapidly behind the mountains, and the temperature was dropping fast. I packed down my gear rapidly and started on the return to the car, which took me about an hour. Moving around after dark would not have been an issue here, due to the almost full moon and snow covered landscape, but it’s always nice to get home before dark. 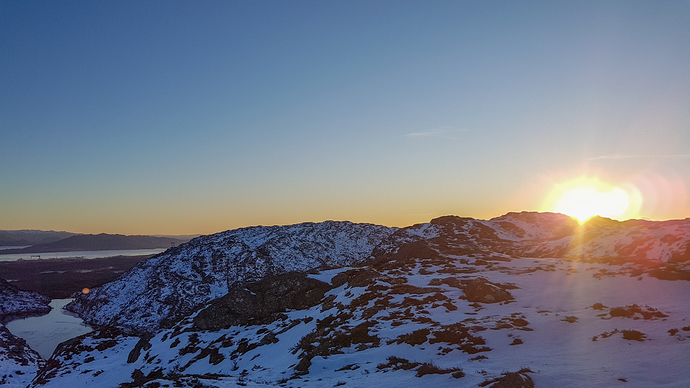 Sunset, time to get back to the car

I’ve never done a SOTA activation with this much walking compared to radio time, but it was a lovely experience. In total I was away from the car for a bit over 6 hours, walked 8.5 kilometers and scaled about 570 vertical meters. 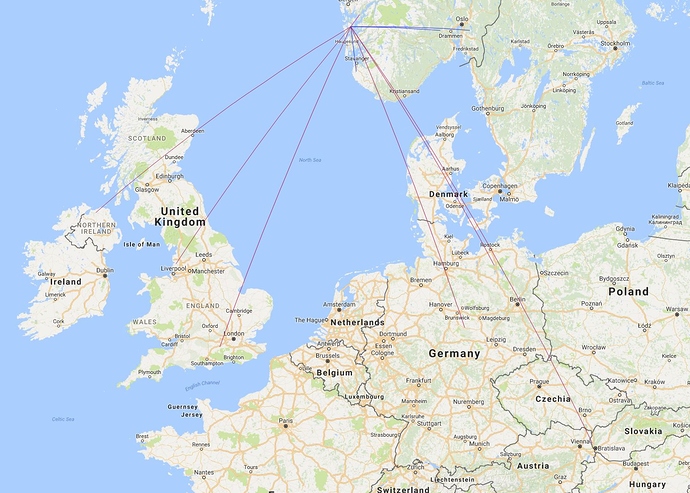 Map of some of the QSO’s

I also made a video report:

In the photo and video you can see that quite a bit of snow.

Is this usually for this time of year?

Yes, snow is common in the winter here. The amounts of snow varied a lot between the summits, one of them was more exposed to wind, so most of the snow had blown away. Further inland (the summits you can see on the horizon) may have snow all year, and many meters of it at winter.

Great pics and I enjoyed watching your video. If it is possible to record the activation QSOs that would be a nice addition on a future activation. I always like to hear what my signal sounds like at the Activator end.

I managed to chase you on LA/HL-163, thanks for the new summit.

I look forward to future videos of your activations. Beautiful scenery.

Thanks @G4AFI.
It was a very short activation that time, so I was glad I was able to get 11 chasers in there. I was planning on filming my QSO’s, but I had problems with my pen (note to self: bring a pencil for cold weather activations), so I was logging on my cellphone, which is also my camera. On the next trips I’ll hopefully bring a secondary camera, so that I can film the activation itself. Most of the time I use a headset though, but I’ll disconnect that to show what the pileup sounds like.

I look forward to working you again, the next activation will hopefully be another two-pointer this weekend.