Wideband 'static' noise 20.3MHz and up

The noise blanker has a dramatic effect and cuts it from S8-S9 to under S1. I’ve read the NB works only on man-made pulse type RFI and not on atmospheric noise.

It’s not there mornings (although I need to check more often to confirm this). This morning, it was the opposite way round: 40, 30 and 20m were noisy. NB has no effect on the low-band noise. By contrast 15-10m had only S1 noise [Mag activity was K=2, A=26, so no magnetic storm to explain that].

I’m thinking it’s probably local EMI or an antenna fault but wonder if anyone else recognises this frequency and time-of-day dependent noise.

I’ve just run a prediction for Jovian storms for the next two days and there are none in the day time. I will caution my statement with the fact that my prediction comes from software I wrote myself.

Since February this year (for obvious reasons), I’ve noticed all sorts of funny extra things appearing on bands. I do occasionally see funny noise pulses sweeping up and down 15m. I’ve only noticed it in the last few months. It hasn’t bothered me enough to investigate if it is local or less local.

I did a small investigation this afternoon (as afternoons and evenings is when the problem appears) to try to determine the source of the RFI.

I switched off the AC mains supply to the whole house [whilst running the KX2 on a LiPo] and that made no differences to the noise level on any of those bands. So, I concluded that the RFI is not coming via the mains electricity or a source within the house.

Then I set up the KX2/LiPo in the car with my Chameleon MPAS Lite vertical mounted on a large HF mag-mount on the car roof so I could see the variation, if any, with location. 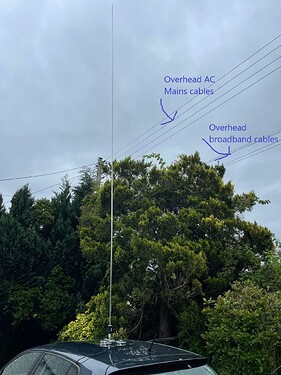 The numbered green crosses on the map show the four locations where I took readings. The blue line shows the line of 3-phase AC mains and broadband cables strung from telegraph poles that run up and down on my side of the street. Overhead spur cables branch off from the poles to individual houses all along the road. 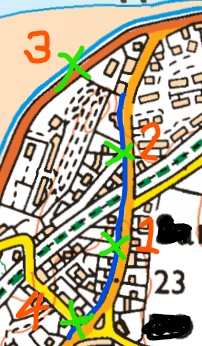 The noise level was slightly lower than in the shack. I put this down to the fact the driveway is partially surrounded by the house and garage whereas the OCFD is higher up and in the open in the rear garden. So, I eliminated the OCFD as the problem. The overhead cables were about 4m away from the vertical antenna here.

Location 2: Parked ~150m down the road. The noise levels were a bit reduced even though the vertical was only about 2m away from the overhead cables. [A BT engineer told the broadband cabinet is in the other direction and the number of customers drops to zero before the end of the road].

Location 3: Parked on the main ‘B’ road by the river estuary just outside the village. 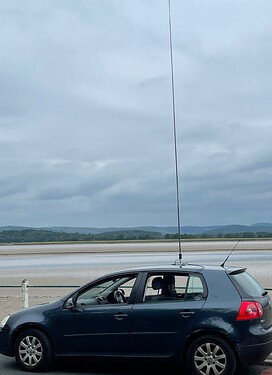 There are no overhead cables there and widely spaced houses and none on the northern (estuary) side. The noise had dropped to under S1 (without using the NB).

I - unfortunately have a similar problem. Having fairly successfully removed most of the noise created in the house there is no an intermittent Wideband noise that for me starts at 7 MHz and goes all the way up to 28 MHz. Although hard to identify it does have a 50Hz component.
I have turned the house supply off to no avail.
Our “mains” is in effect a spur with 7 properties - but we are close to the HT line that feeds the spur. A short wander with an old sw radio very quickly shows that the noise increases as the HT lines are approached. It is very intermittent so my noise level on 20m varies from almost none - or at least “Jupiter” background to about S7 which can be tamed a bit by the noise blanker but not eliminated, There does not seem to be any logic when the noise appears - so not solar panels feeding in as it is day or night, not noticeably different at evenings or weekends so probably not industrial or farm related. Not weather related wet dry, wind snow rain - seem to have no effect, Once it starts it is several hours long.
I wondered if it was an insulator breaking down on the HT line - but it could be anywhere along about 3km of cable…or something that is connected feeding the noise into the HT line.
So far the best solution has been to relocate the vertical further from the HT line which has removed at least 3 S points of noise. I have another doublet which I probably need to re-engineer to be at right angles to the line.
Any other suggestions anyone?

It seems clear that you have two different noise sources, the AM source that the NB doesn’t affect, and the PM source which the NB does affect.

I would guess that the PM source possibly originates with an unsuppressed electric motor. A possible suspect if the noise is local is something like air conditioning or a cooling fan. Unsuppressed noise goes into the mains and can be re-radiated at up to quite a distance.

The AM source sounds more like the electronic smog that so many of us are inflicted with. There are a legion of possible culprits. Small chargers, larger car battery chargers, some solar panels, you name it!

One possible way of dealing with it is a phasing noise cancelling unit such as the MFJ 1025, though this may only be a partial solution if there are multiple sources as it will only cancel one at a time. It takes some driving, too!

One particularly nasty source that I located was a contactless phone charger, this gave s9 hash modulated with a ticking noise when idling, but was much quieter when charging a phone. It even wiped out 70cms!

It seems clear that you have two different noise sources, the AM source that the NB doesn’t affect, and the PM source which the NB does affect

Brian, that prompted me to look at both this morning [~8am BST]. I used the FT857 to spot check from 1 to 33MHz in 1MHz steps, this time in AM mode [which as you can imagine makes the RFI signal louder].

The AM noise (which sounds like white noise) is from 1 to ~20MHz around S8 to S9+10 [in AM mode] and unaffected by the NB. I need to do this check again regularly as there might be other sources involved [e.g. atmospheric, Jupiter(?)] as well as the ‘electronic smog’ you mentioned. This is certainly worse than when I first replaced an EF LW (with no counterpoise) by the current OCFD last September.

Low band chasing and interference in the shack On the Bands

Two months ago, I said I would report back when I had the new antenna working. Well, my first two attempts at making and positioning a homemade Off-Centre Fed Dipole for 80m-10m were not very satisfactory and, feeling downcast after my efforts, was even thinking of reinstalling the old end-fed long wire despite the high background noise that prompted me to create this thread in the first place. Also, moving the house-end antenna support point from the bungalow chimney to a mature tree at the ed…

The PM noise (which sounds like burbling / blowing a raspberry on narrow filter) is from ~20MHz to 33MHz around S8-S9 but is reduced to under S1 by the NB. It can also be heard on 6m but at a lower level. This is the first time I noticed it in the morning.

My problem is, I can’t sit monitoring in the shack 24/7. What would be nice is some PC software that can periodically record a sample of audio or the S-meter level.