There are many completely untouched peaks in the southern Urals, remote from the network of roads and cities. Of course, the activation of such summits is a very interesting and difficult task. The goal of our small spring expedition was two such summits - R9U/SO-083 and R9U/SO-120. To get to them, it was necessary to arrange an rafting more than 100 km long along the mountain river Bolshoi Inzer. Only one village on the coast at the beginning of the route. Next - the taiga and the lack of communication, except for HF, of course. 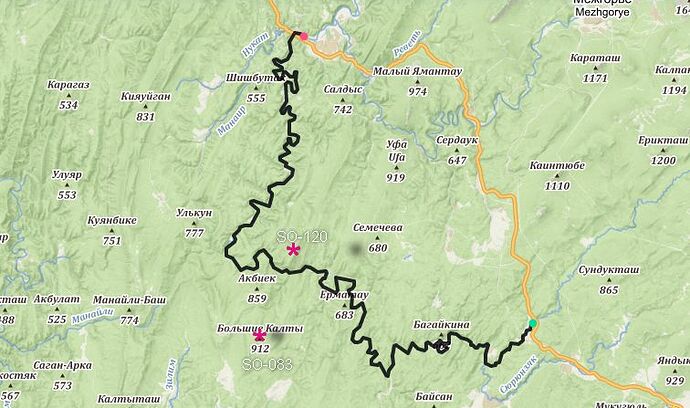 Early in the morning on May 6, our team started in two cars from Ufa 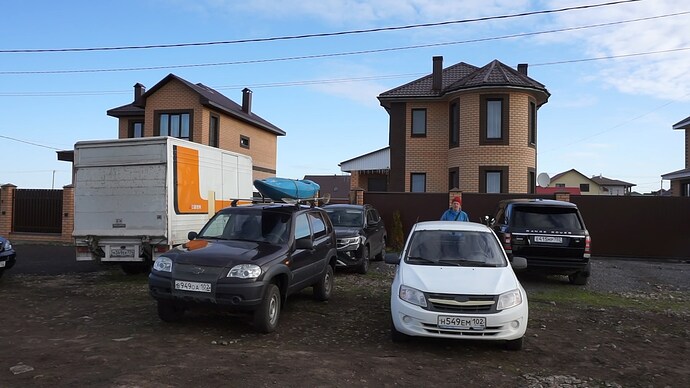 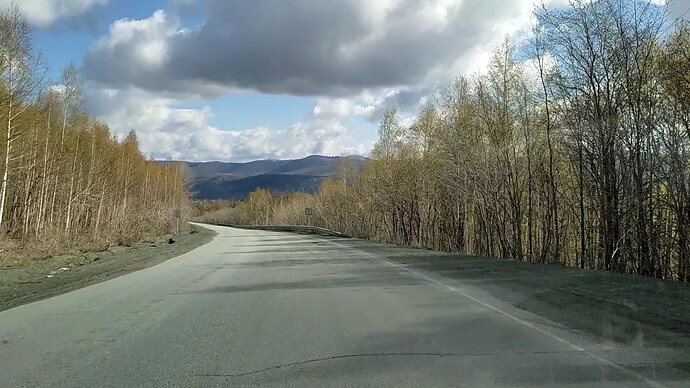 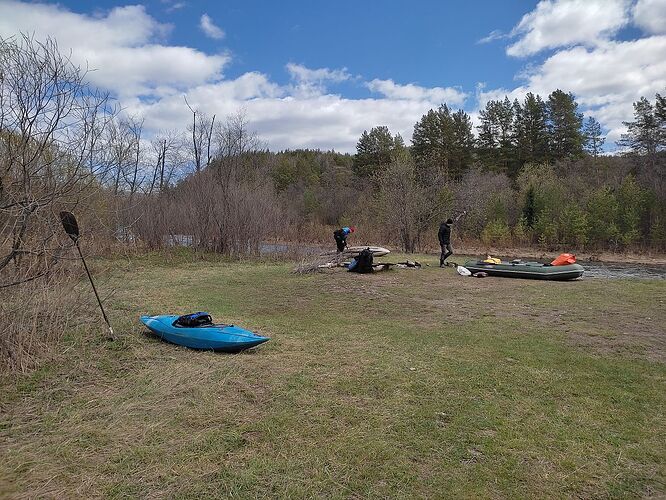 16522805065991280×960 413 KB
Unloaded equipment and boats. Vladimir and Albert stayed behind to pack gear and food in dry bags and pump up the boat. And we went with Alex back to the finish line - the village of Inzer. There our cars will wait for us for 4 days. Then we called a taxi and went to the start.
Assembling boats and packing equipment is the first check of readiness. RK8A and UB9WLJ are beginner rafters. But by joint efforts, we managed to pack their things and practically not forget anything at the start. It is good that their boat was not overloaded! 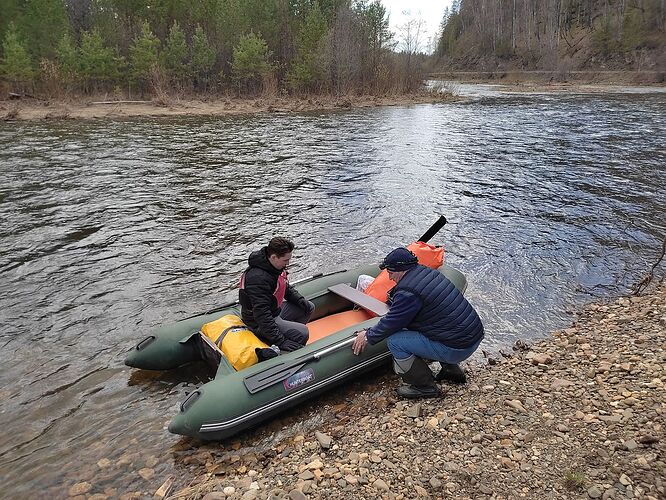 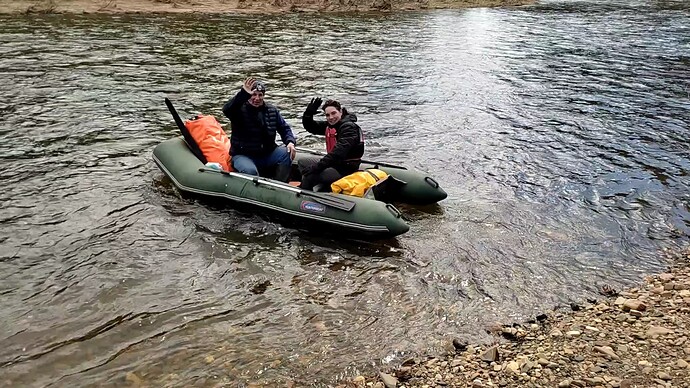 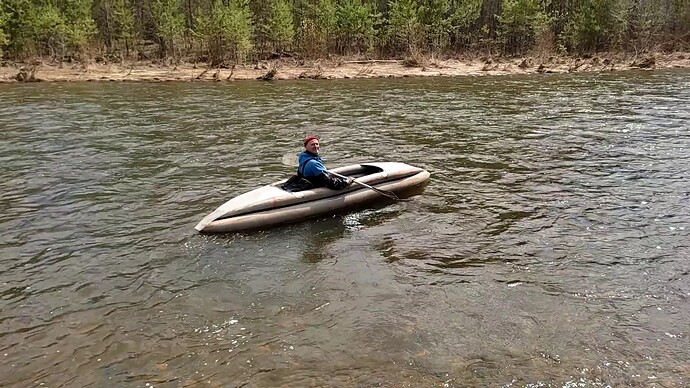 VID_20220506_142548.mp4_snapshot_00.09.6591920×1080 305 KB
We need to get as close as possible to our goal - the summits. To our disappointment, the water level in the river was much lower than usual. This affected the speed of our movement. Rocks sticking out of the water also added to the problem.
An hour and a half later, the first incident. The crew of a large inflatable boat broke an oar on a rock. 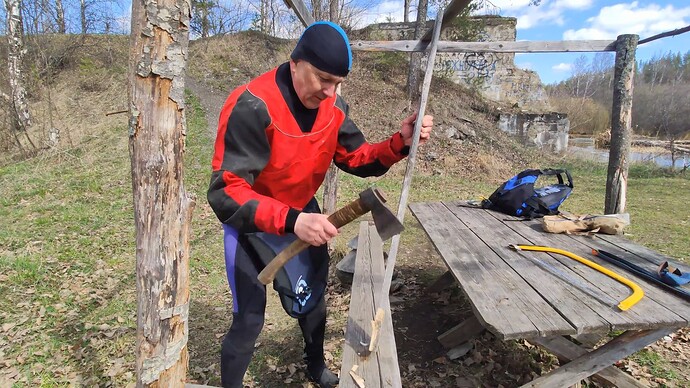 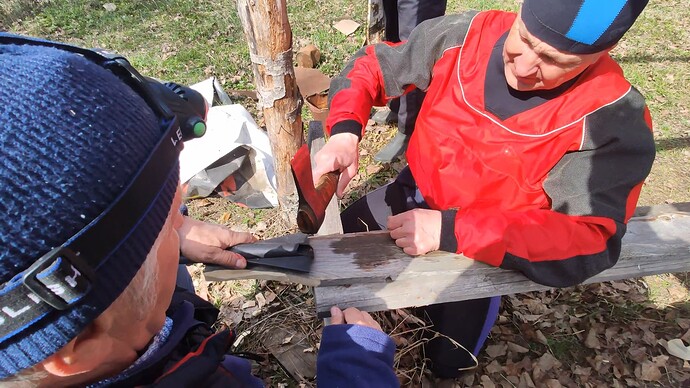 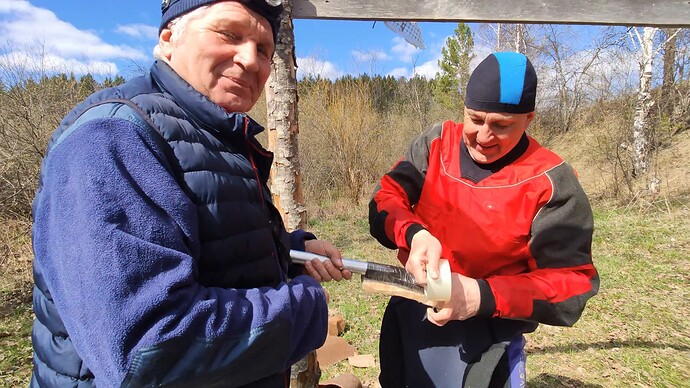 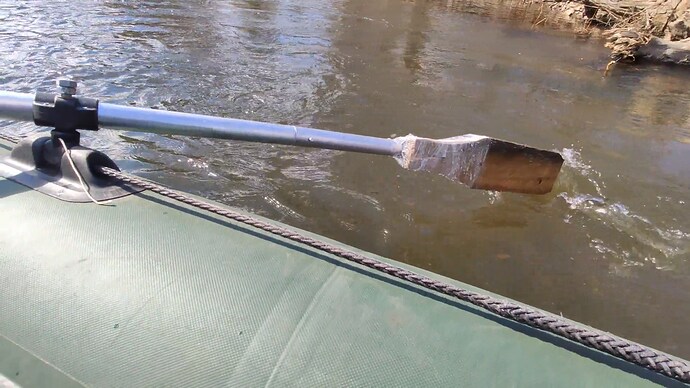 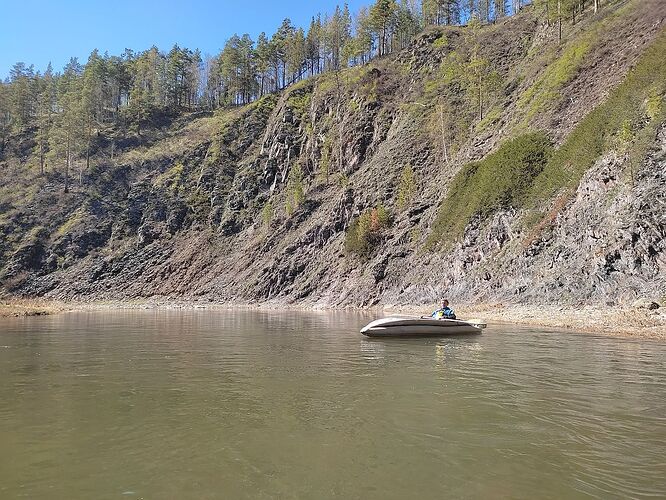 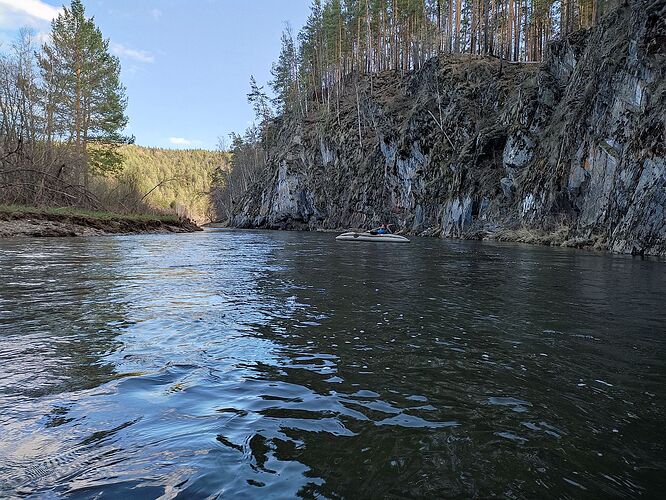 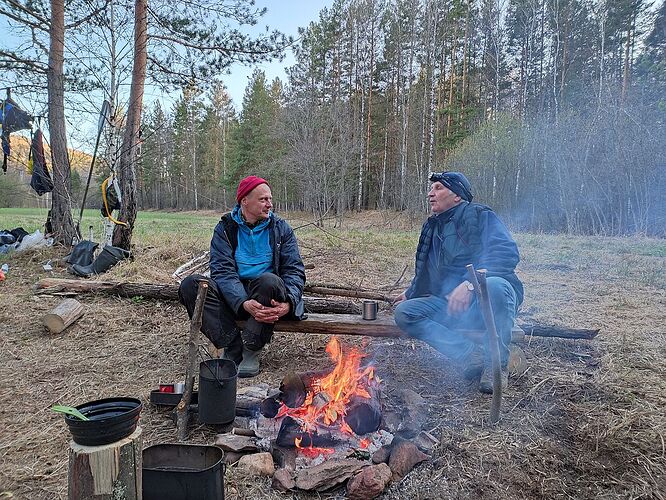 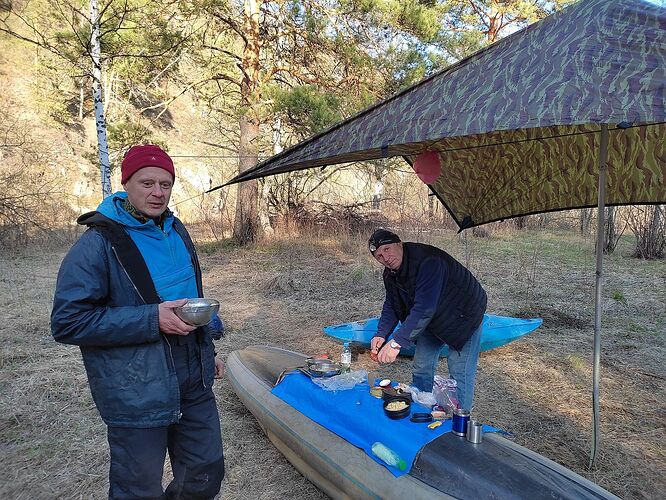 16525968517881280×591 287 KB
Vladimir’s RK8A high rubber boots turned out to be full of holes. I had to repair them with glue and a patch.
Despite everyday tasks and the rapidly approaching night cold, they managed to pull the dipole by 10 MHz. RK8A was QRV already in the dark. The air is crystal clear. To the nearest village - many tens of kilometers of taiga and mountains.
There was a slight frost at night. Probably around minus 5C. The water in the pots was completely frozen.
Day 2 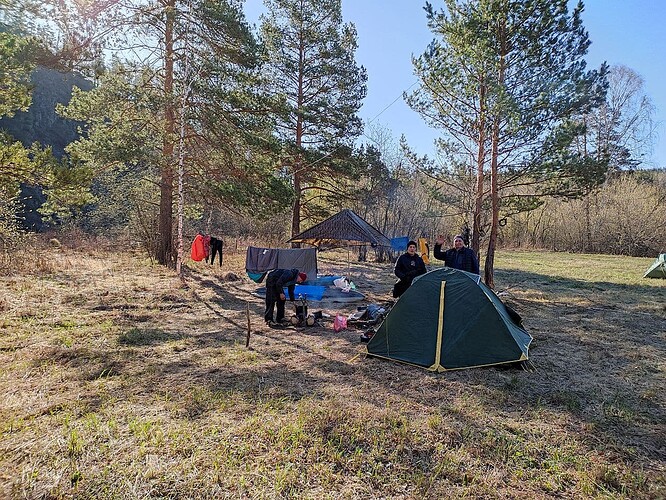 16522805058971280×960 412 KB
The morning sun and the fire quickly warmed the travelers who climbed out of the frosty tents.
This time the packing went faster. Things are gradually starting to find their place. An endless series of turns, shoals, rolls. Headwind. Along the banks are low cliffs and taiga.

16525968518521280×591 185 KB
The big inflatable boat is lagging behind, control them on VHF. We have time with Alex to quickly cook dinner on the beach. Grandfather and grandson managed just in time, it remains only to get the plates and spoons. The weather is clear but cold. This, of course, is convenient. No problems with rain, no ticks - an indispensable attribute of the spring taiga.
By the end of the day we reached the right place. From this camp, in two separate groups and already on foot, we need to go to the activation. We set up a camp in a clearing, next to the Saryshta stream. Of course, going to summits in the evening is not realistic. Far enough away and fatigue accumulated during the day. Dinner, minor repairs of equipment - and sleep.
Day 3
Decisive day for us. It is necessary to make activations of the summits, what this whole expedition was for. Decided: Alex R9WGK is going to the more distant R9U/SO-083 summit. He takes with him a 14 MHz GP and a Discovery TX-500 transceiver. It will go about 10 km one way, with a rise of more than 520 m. UB9WLJ, RK8A and RX9WT go to R9U / SO-120. We have to go less, about 5 km one way, and climb almost 100m lower. But we need to cross to the other side of the river. We have a homemade RX9WT transceiver and a dipole antenna. Of course, there are no roads. Except for the paths that the animals walk on. Alex quickly folded his backpack, put his portable radio in his pocket and ran through the taiga towards his summit. A little later, our team set off. From the river immediately began a steep ascent along the ridge, along the rocks. Having gained almost all the necessary height, we went further along the top of the ridge. 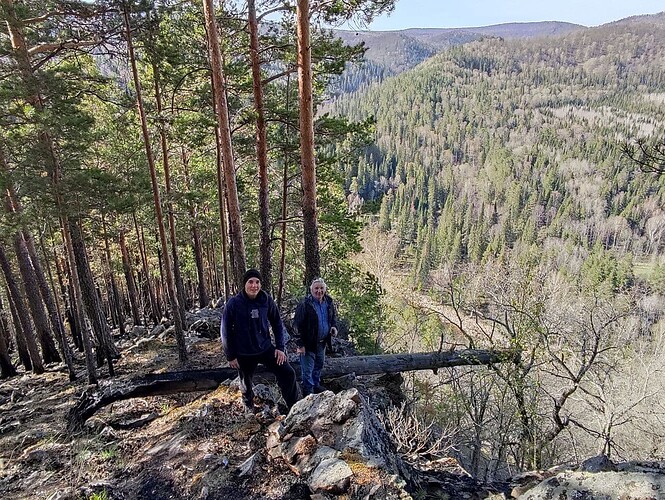 16522854172691280×962 353 KB
Four kilometers to the north is our summit Saldys - a peak that looks like a truncated cone. Around the dense forest. Lots of bear and moose tracks.
It so happened that we were at the summits almost simultaneously. We talked with Alex on VHF and proceeded to install antennas. 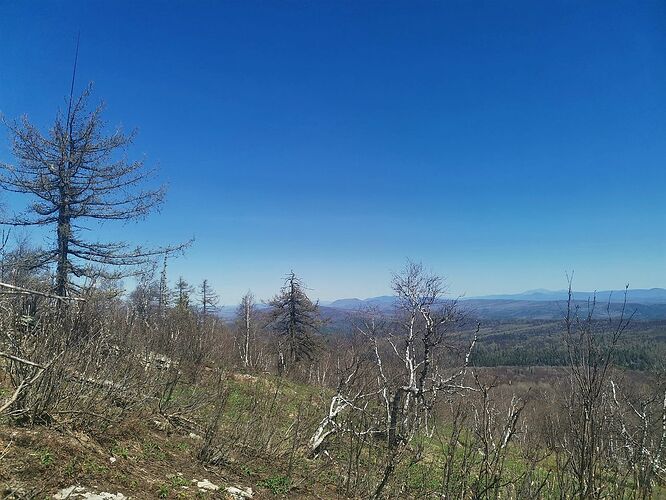 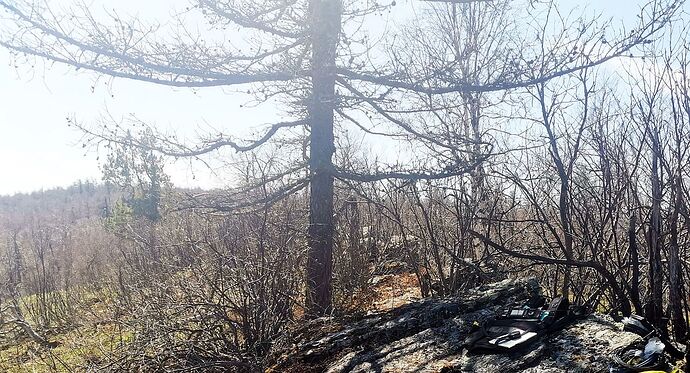 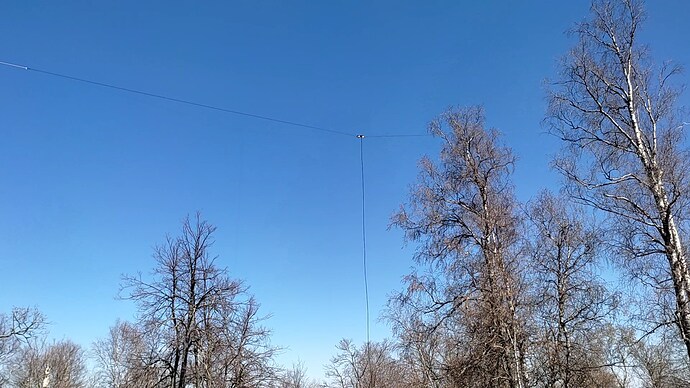 VID_20220508_122619.mp4_snapshot_00.07.0511920×1080 449 KB
And we just pulled a dipole between the trees. On this day, the cold weather abruptly changed to hot. The sun mercilessly roasted unprotected parts of the body and face. Some participants even received sunburn. Ticks warmed up too. While we were QRV at the summit, dozens of parasites inexplicably ended up on clothes, hands and equipment. So it was necessary not only to engage in activation, but also to constantly examine each other and remove annoying parasites. Surprisingly, cell service is available at the summit. We call Marat RA9WJV, in Ufa.
I am very grateful to my activation comrades for ceding the first activation right to me. At 0645 GMT I pressed the CW key for the first time. And a minute later there was the first QSO. 15 minutes - 38 QSOs. Chasers were waiting for us on the air. Thank you so much for this radio holiday! Knowing that my friends are waiting for their turn, I give up my seat at the transceiver and announce a new operator - RK8A. 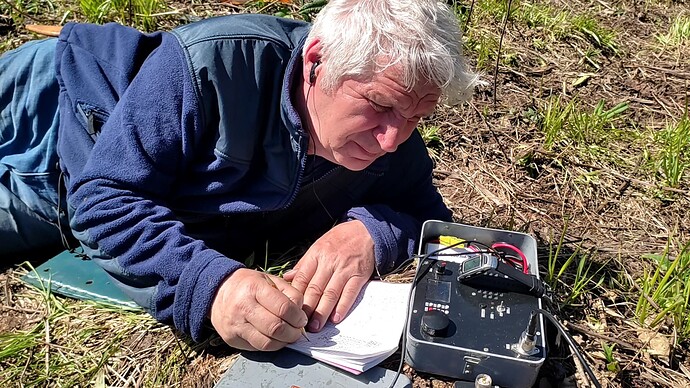 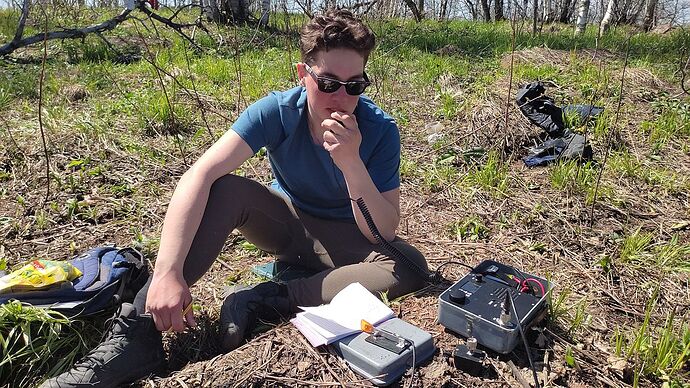 16522854170591280×720 391 KB
After spending about an hour on the summit, we began to remove the position. Around the same time, Alex began to roll up his antenna. His activation was also successful.
Driven by thirst, we hurried back. We were at the base camp about an hour before Alex. We had time to prepare dinner and began to break camp. Alex came out of the forest full of impressions - his path was much more difficult than ours and required skillful orientation and good physical strength.
We had a quick lunch and started packing our things and equipment. Ahead was the second half of our waterway. And there was little time left - on May 9 we need to be at home.
From the Saryshta stream begins the main water obstacle - the Saryshta roll. It determines the sport difficulty of the route. Of course, this complexity is quite low. But for beginners on an inflatable boat - just right. When the water level in the river is high, which is usual for the beginning of May, then there are waves up to two meters high on Saryshta, and near the banks, the water forms vertical turbulences that can easily turn the boat over. But in our case, the water level was minimal, sufficient only to pass the rift without getting out of the boats aground.
Passed this section without incident. The big inflatable boat team was thrilled with the experience! 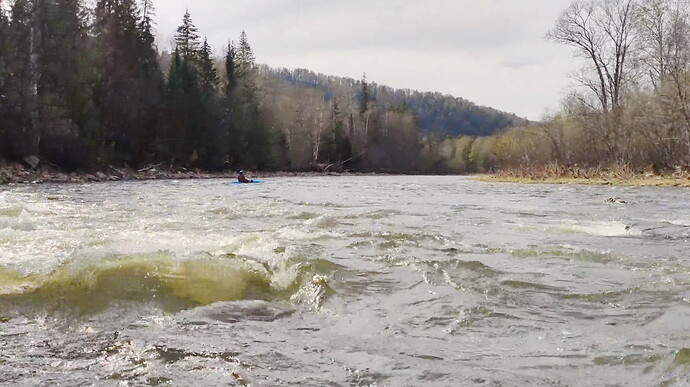 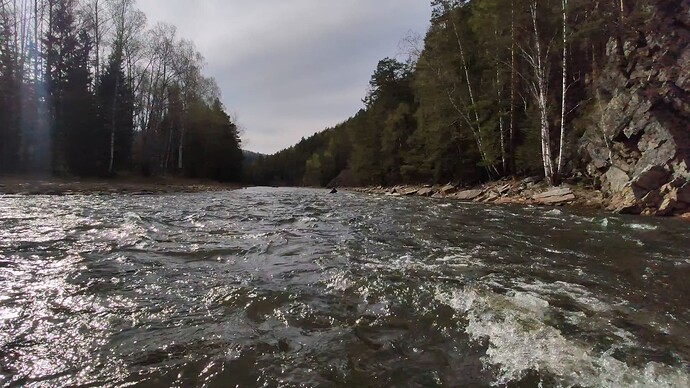 VID_20220508_170651.mp4_snapshot_00.18.1601920×1080 268 KB
The slope of the river bed increased, the speed of the current also increased. This helps us get to the finish line faster. But still, to cover 25 km we had to row until almost dark. Again the big boat has lagged behind and only VHF connects us with them. Alex and I saw a clearing suitable for the camp and, staggering from fatigue, began to set up camp, make a fire and prepare a long-awaited dinner. When the water in the boilers boiled, our comrades came ashore. Not far from the camp is the entrance to the cave, popular with tourists. But there is neither time nor energy to visit it.
Day 4

16525968519211280×2774 1.13 MB
Wake up 1 hour earlier than usual. A quarter of the way along the river is ahead, and the water level is dropping rapidly. This day was remembered as almost endless paddle work. Constant turns of the river, islands and channels appear, littered with trees carried away by the flood. By VHF, I suggest to my comrades the right path … At dinner, the whole group almost simultaneously fell asleep on the grass, while soup was being cooked and tea was boiling. Fatigue is showing. Woke up friends when it was time to hand the spoon.
Five, ten turns of the river… Of course, the river is familiar, landmarks and distances are well known. But the finish, as often happens, seemed unexpected. At first, the power line became visible, then the minaret of the village mosque on the high bank. Cars roared along the road bridge with a roar …
We managed to wean ourselves from such speeds in 4 days of rafting! 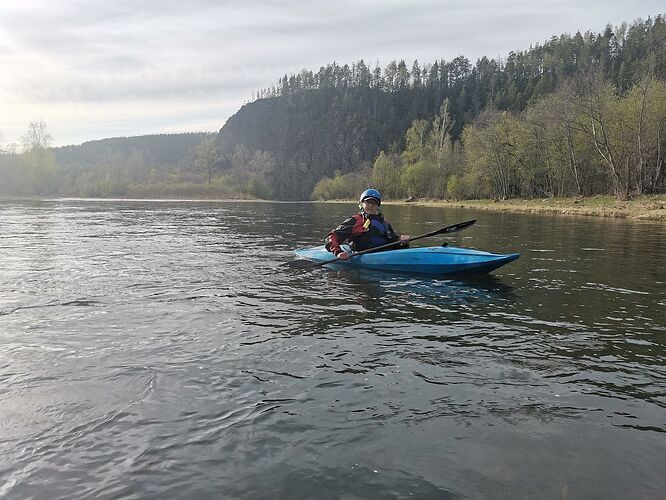 Hi Vlad, thanks for a great report and photos

Very creative with the paddle repair too. Well done to you all, you clearly look that you really enjoyed this trip together and had fun.

There are only one or two Scottish summits here in the UK which are easier to reach by canoe or kayak. Shame = I really enjoy canoeing.

To M6GYU
Hi, David.
Thanks for feedback!
the position - “kneeling”, as in a canoe, is also well known to me. 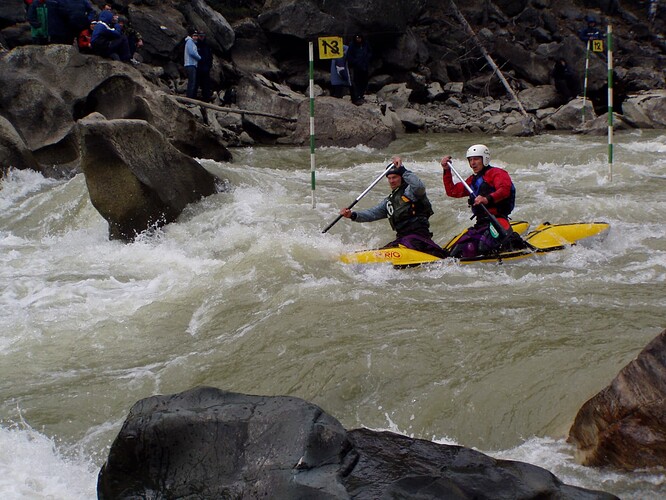 Love the trip report as it ties together two of my favorite things… SOTA and whitewater. Thank you very much for posting this and all the photos!

Wow, what an adventure! Thanks for sharing your impressions and the great photos, Vlad!

Those boats are classed as " C2" s in the UK I think. Great fun. White water and SOTA!! Skiing in/out to SOTA summits is also good fun!!

I can but dream…