which carbon poles are you using? I’m looking for one to buy in EU.

Thank you for your answers!
Axel, DF1ET

I bought a very light and compact Decathlon Carbon fiber 5 meter long LAKE SIDE travel 500 (40,5 cm collapsed).
Very useful to travel with in air planes, and very light in my rucksack…

There are versions with 6 and 7 meters long, also in carbon fiber.

Hi Axel,
I presume you are looking at portable use? The FibreGlass (not carbon fibre - they can affect vertical antennas in theory) mast, I recommend is the one from Lambdahalbe in Germany. The 6 metre one is good value for money at €34 plus shipping (which isn’t much inside Germany, I think €5 or less). These are solid poles except for the top two sections which are better not used but are also small and light to carry.

If you want larger poles for use at the home QTH, take a look at DX-Wire: 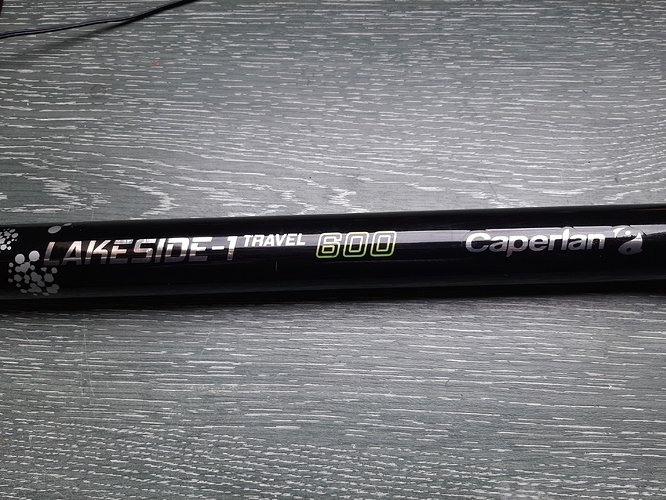 When I was looking for a pole, everyone advised me not to use carbon because it affected the antenna.
In the relevant ham-shops only gfk poles are offered.

Have you ever compared that? Do you have any experiences? This probably only applies to vertically polarized antennas… like every metal pole - but is its influence really so strong?

Carbon would be more stable and cheaper - especially in fishing shops.

My opinion on two types mentioned above:

At only 2 mm, the top section of Lambdahalbe is more or less unusable. Just got my Lifebreeze (thanks Bruno HB9CBR for initiating and handling a collective order).

P.S.: The 673 g of the Lifebreeze is correct. Measured using my kitchen scale. GPB should read GBP, sorry.

The one from lamdahalbe is actually idential with a the 6m version from Decathlon Type Lakeside-1 with a shrinking tube over to protect it.

I use the 3m version with a j-pole together with the handheld for lightweight activation.

And I tested a 4m Carbon version and it totally detunes the J-Pole so glassfibre is preferred if the antenna wire is mounted along the pole. For an Inverted V setup it would not matter so much if you keep it isolated. 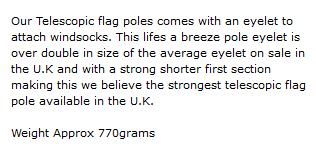 I presume it’s just a typo GPB rather than GBP?

They have a nice range, right up to 10 metres in length and some multi-coloured versions as well. Unfortunately, I can’t find any information on shipping costs outside of the UK and shipping from the UK can be (and often is) VERY expensive when compared to shipping out of Germany - so the idea of a local group bulk ordering sounds like a good idea, to save on the shipping costs.

P.S. UPDATE - I have just found that LambdaHalbe no longer ship outside of Germany. (not a problem for Axel as he is in Germany but for any others following this thread, you should note you wont be able to order direct from LambdaHalbe unless you are in Germany).

VERY expensive when compared to shipping out of Germany

Because the postal service is no longer a public service but a private company.

Thank you very much for all your replies! - I think, I’ll give the carbon pole Ignazio, EA2BD, mentioned a try. - I’m using an endfed + tuner, hope signal strength will not be reduced by the carbon.

Just want to add, DK3IT made measurements on carbon poles here:
https://reflector.sota.org.uk/t/hf-antennas-on-short-masts/16161,
which indicate, that carbon poles have no adverse effect on the antenna (besides maybe shifting resonance frequency, which is no issue for me, because I’m using an ATU).

I want to buy a carbon Lakeside 5 travel 600, but at present it is not available in Germany.

In an effort to answer some questions about carbon poles. I have made a test rig. It consists of a tuned circuit (approx 10.3 MHz) with two coupling coils. These are connected to a spectrum analyser and tracking generator. Anything “bad” placed in the field should disturb it. The video shows one of our new Carbon-6 masts inserted into the coils such that the whole mast is in the field (worst case). No effect was noted. This suggests that carbon masts don’t “absorb radio signals” to the extent that some people suggest.

Just because it says “Carbon” on the tube is there carbon inside?

I am a persistent pessimist

It’s black and conducts (poorly) and thus I assume it’s got carbon in it.

I spent some time today making the system more sensitive so I could make better measurements.

You’ve got to be joking… 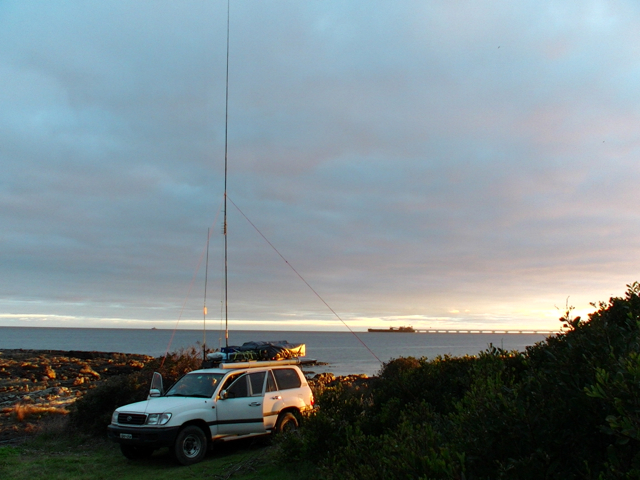 Quite surprise when you revealed the fear of carbon material as a composited mast by the majority of operators.
In the past when dyneema rope was rare as hen’s teeth, I used SS cable to stabilise my tower, never had any problem (all those cables were cut for non resonance on HF and linked together by ceramic dog bones for used as guy wires.

Back to carbon material for the composited mast, mine has a résistivité of 40 Ohm/m. 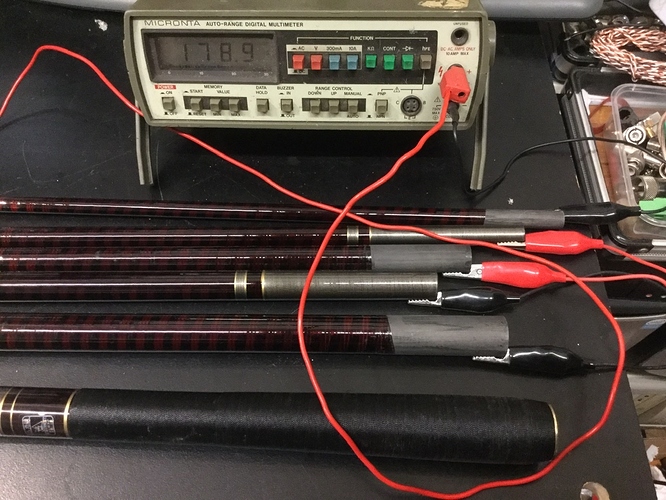 I use Return Loss S11 to check resonance, for 4.5m long (5 telescopic segments) carbon mast, it resonates at 23MHz (+ error for proximity effect as hastily indoor tested), so the VF is 0.72! 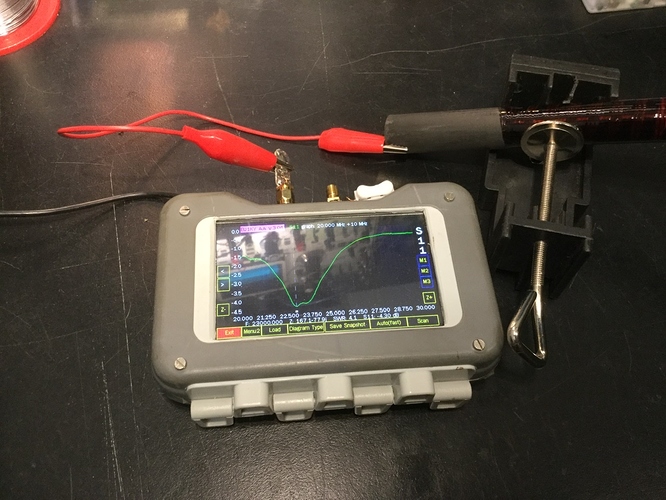 Your mast is far more conductive than the one that I tested. Mine has no dc conductivity between the sections although there will be some capacitive coupling.

I have tried using the SOTABeams 6m Carbon masts and I don’t perceive a difference in signal reports using it as an inverted V. I also saved a half a kilo in my pack

I have done a few measurements on 40m and 20 m with carbon poles. See the link.

(Please see important additional information in my later post below)

Thanks for posting a significant and relevant piece of work here and on Facebook. Please copy your good details and post them here too - so everyone can see what you found quicker. This is the first reasonable set of experiments I’ve seen where actual RF effects of carbon fiber poles are shown. Mostly people just talk and repeat what others say.

I’ve been using carbon fiber poles for years, and chasers tell me I have good signals. My RBN spots are up there with others using similar gear (KX2 at 10W, 66-foot end-fed wire set up as an inverted-L, homebrew tuner, and operator near the base of the pole). I feed the bottom of the vertical wire that runs up to the pole tip, and then continues way out sideways. Usually I don’t use a separate counterpoise, just relying on the radio, wires, key cable, and operator for the return current of the mostly high-Z antenna. On 40-30-20M the feed Z is relatively high.

What IS relevant is that I rarely run my wire very close to the carbon pole, except for the one support point at the tiny tip of the pole. I use the very thin top sections of my poles even though they bend over a lot due to the tension on the wire. The effect is that most of the vertical part of the wire is 4 or 5 feet away from the pole. The vertical part of the wire at the pole tip is almost perpendicular to the carbon fiber, and the horizontal part of the wire runs in the opposite direction from the pole. My tuner settings change little from site to site, unless I run the wire really low, near or on large rocks, across many live tree limbs, or otherwise increase the capacitance of the system.

I know people who have gone to great lengths to allow their poles to support their wires as high as possible. There are two tricks that they use:

Obviously both these tricks greatly increase the coupling between the RF current and voltage in the wire and the pole, compared to letting the pole top sections bend out sideways with the tension on the wire.

Until I read your results, I thought I was just being lazy and saving time by letting my pole bend, so that most of the wire is several feet out sideways. Many times I’ve taken advantage of the curved pole, by setting the pole up slightly uphill from where I sit, and then sitting downhill and more out of the wind coming across the hill, etc., where the wire comes down. I have a couple of little loops tied in my wire, and there’s a small snap swivel (fishing fastener) tied to the pole tip, so I just hook a convenient knot into the snap hook, and that’s all there is to it.

Now I feel like coming out and saying more activators should use poles this way - it’s not only quick and easy, but it’s one of the best ways to reduce coupling to the carbon fiber pole.

Thanks to other people doing tests and measurements for this thread, here are the key points that matter:

Today I pulled out my favorite carbon pole and measured the resistance at the exposed ends of several segments. With a little pressure on the probes, I saw resistances around 100 ohms. I saw similar numbers on both the big sections and the little sections. I still want to measure an entire pole. (See results in later post below)

For over 100 years we have relied on carbon resistors in much of our electronic equipment, and here we are with giant carbon resistors we put in the near field of our SOTA activations, and they’re large enough to couple significantly to our radiating wires, and therefore some power will be wasted compared to what we would lose in a similar non-conducting pole.

I don’t plan to give up using carbon fiber poles - mine have served me well. In practice, I see almost no change in my tuner settings, whether I use a fiberglass or a carbon fiber pole, across the 40-30-20-17M bands. Because of the considerable curvature of the pole, most of my wire is several feet away from my pole - the wire is an inverted-L, so the pole is drawn out toward to far end of the wire, which is under enough tension not to droop badly. I use a #24 stranded teflon wire to minimize droop and still have enough strength to stay together and not stretch in high winds.

The curving pole has another advantage - it absorbs stress as the wind blows the pole and wire around. The flexible upper part of the pole gives and actually flows in the wind. Tension on the wire is balanced by the spring of the bending pole. Often the single antenna wire is one of three guys - the other two are strands of polyester (dacron), tied around rocks to hold the pole up, but usually tied to the pole about 6 feet off the ground.

It think that the advantages of carbon fiber poles outweigh the disadvantages - at least for SOTA activators, who need light weight gear. Fiberglass poles weigh 25-50% more than similar carbon-fiber poles. Fiberglass poles have a larger diameter and catch more wind - more wind-force - than skinny carbon fiber poles. Both types of poles will break if over-stressed. With care, either type of pole can last for hundreds of activations. Both types of poles are very economical over time. They’re somewhat expendable, and their cost is trivial compared to the costs of radio gear, outdoor equipment, and driving.

With respect to radials laid on the ground for a low-Z vertical antenna like N6IZ describes: