Arrived at the park spot where I had parked last time (2009) , nothing much changed here. Through the barrier and onwards up. 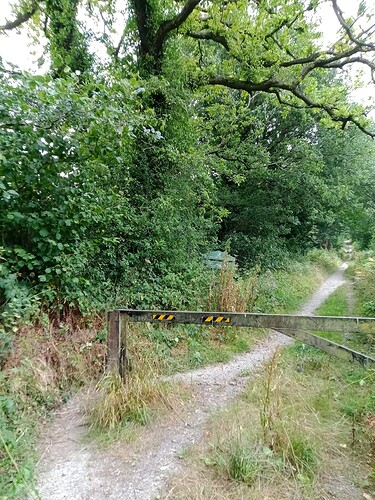 A few hundred metres up you come to a 3 way fork in the path, the one on the right is a “Calf Killer” I did this last time and as both myself and Tom M1EYP says “NEVER AGAIN”
We took the middle path which goes off and up before reaching a sharp hairpin near the top to the right, well signposted it levels off here and follow it till you reach the Folly. It was here we discovered that the path was overgrown it was not visible in places! 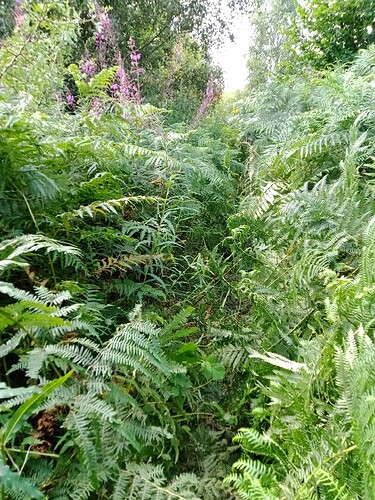 I used my walking stick as a Machete, to get through, This seemed to disturb the flies who then followed us up to the Folly and never left my side the whole time we were up here! (Must have been my Aftershave

Finally arriving at my chosen spot for the activity, The bench and table next to the Folly. I set up the equipment for 20m, 17, and 2m ssb. 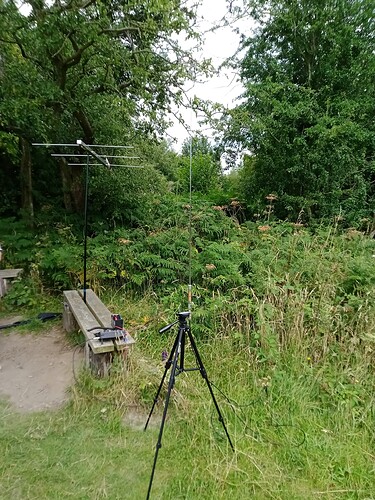 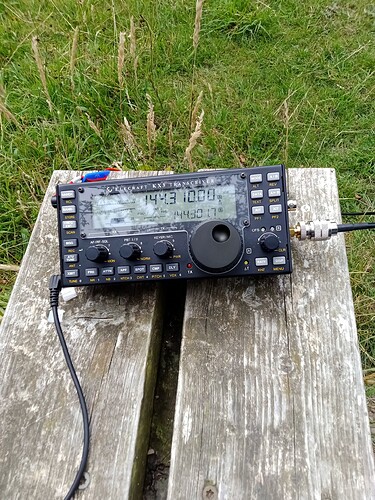 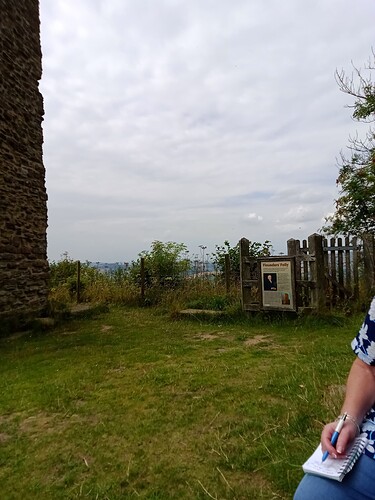 In this photo you just catch Elaine getting ready to complete my Logs, and also the info board at the gate to the folly picnic area.

I decided to start on 2m SSB as I had arrived late and was hoping to catch Ross G6GVI who had messaged me earlier to say he was hoping for the chaser point from me, but 1st in the log was a closer station Ken G3UDA, who confirmed my 3 watts from the KX3 2m module was actually working. Then I heard Ross in the noise so turned the beam and we had each other at 5:3 both ways( he was on the moors by Winter Hill, so pleased with that distance with 3 watts.
Now as what seems to happen to me lately when I do get up a SOTA Summit, it went very quiet??? These turned out to be the only 2 contacts I made in the 2 hours we were up there?
I switched to 2m FM changed to vertical on the beam and pointed all 4 compass points, “Nothing” I don’t know where all the locals have gone from this area, but nothing?
HF was next to try at least I knew I had 10 watts from KX3 , so fingers crossed, starting on 20m, lots of calling, not much noise on the band (not like at home) , but 20 sounded flat, swapped to 17m, no voices but could hear some CW, at the lower end. I added the 40m extension to the Antenna. 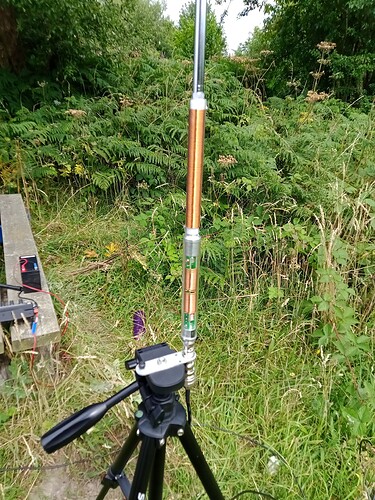 I was hoping for some Inter G with a possible S2S if anyone was up? I heard a couple of stations and 1 Italian station said I was unreadable when I went back to him. Bit disappointed with the KX3 first outing, but we give it a good go.

So No qualify of this one this time round, And it was only when we were packing away that I spotted my Schoolboy Error, I had not fitted the counterpoise wire for the 40m and 20m band???!!! still we had a great time in the sunshine. 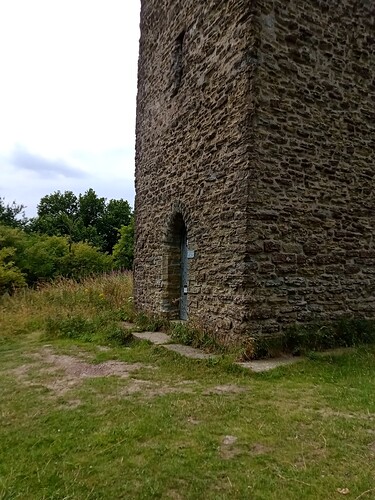 G/WB-012 High Vinnals on Saturday 30th CANCELLED due to me waking up with painful knees.

We decided to go early this activity, as the weather had changed and my Pain relief had kicked in, We arrived at the quarry in wind wet weather, so I took the decision to try to get further up the road closer to AZ and put our storm coats on to walk in with a brolly and just the HH with a extended antenna. 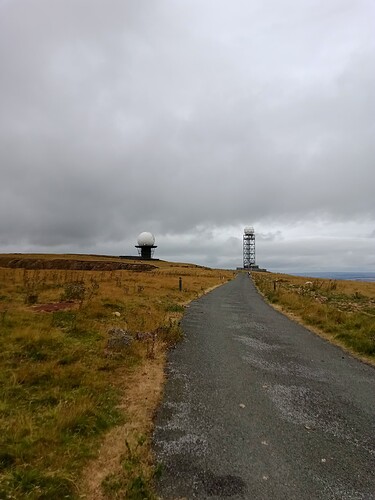 the path is tarmac all the way to the radar station “Golf Balls”, the rain had eased enough but it was as usual up here blowy. we made our way to the building with the large golfball and sheltered out of the wind.

Calling on 145.500 fm I was surprised to get a call straight back from a Old friend SOTA Stalwart David, M0YDH who was mobile, going for lunch , I have not spoken to him for “God knows how long” Great to catch up. I managed a further 9 in the log with the furthest contact being another Old friend of mine Graham M0RSV in Buckley North Wales, another catch up ensued , before my battery warning light on my FT3 had started moaning. 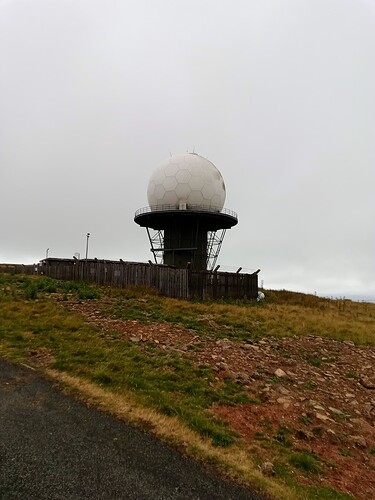 All in all , a good weekend , Elaine said she enjoyed herself and that’s most of the battle done

We decided not to wait for the 2m Backpackers to start but instead headed down to Ludlow, for a well deserved brew and cake before heading back to the Travelodge for a good rest.

Sunday was planned to be anon radio day, but the Car boot at Shrewsbury was a wash out , we did do a bit geocaching, during the weekend, and again really the rain was not torrential, so we coped okay as far as we could

Thanks for the callers on Tittersone Clee Hill and hope to catch some more on our next planned weekend on Shining Tor and The Cloud??

It was good to hear you out portable again on Friday Tony.
You didn’t miss much in the BP event on Saturday - the only stations I heard were on the East side of the country, where the weather was better.
Looking at your pictures, that SMA adaptor hanging off the side of your radio looks rather fragile - I’d sooner use a flexible SO239 to SMA pigtail to make that link.
73 de Ross.

It wont be long be it shuffles of its mortal coil! A Ross says, a flexible link is what you want Tony.

Great to get you Ross, yes I did feel a bit iffy about it ,will organise a Flexi cable adaptor, thanks for the link!

It wont be long be it shuffles of its mortal coil!

yes I agree with you, expensive break as its the 2m module sma connection

when we were packing away that I spotted my Schoolboy Error

Snap! Made exactly the same mistake on Coiliochbhar Hill GM/ES-060 a few months ago. I wont do it again! It was made worse by getting a 4/4 report from a station 30 miles away, despite no counterpoise, so I thought it was just poor conditions with a compromise antenna. Spent the rest of the week with a Dunce’s cap on…

Great work @G1JPV Tony! Callow Hill is made for SOTA having the bench right beside the monument

I hope you made good use of it.

Look forward to your next adventures!

Yes perfect a Bench and a table!!

I am sorry I missed you on the island, Saturday up on Titterstone Clee was not favourable for any HF as it was blowy and wet!!

Well done on your epic adventure

Thank you very much Tony - conditions were very up and down, but I managed to qualify on 2m FM and HF-SSB which was my aim