Something weird is happening round here. My wife Marianne has been adding “Likes” to jazz-rock music videos I have shared on Facebook. She has hardly missed a moment of the World Cup, and has been discussing players and tactics with me as we watch games together. And this morning she goes and says “Fancy a walk up The Cloud?”, adding “I want to be back for the World Cup Final though”. If I am dreaming, I don’t want to wake up…! 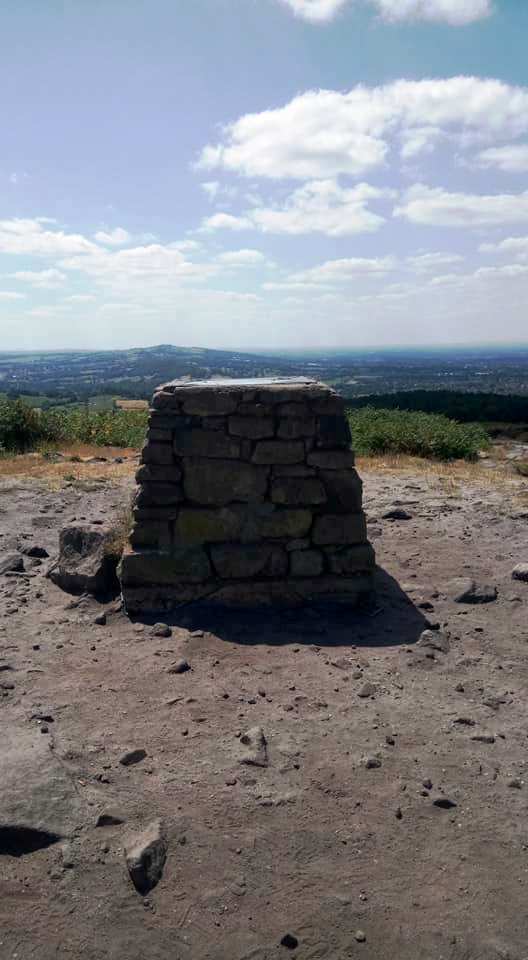 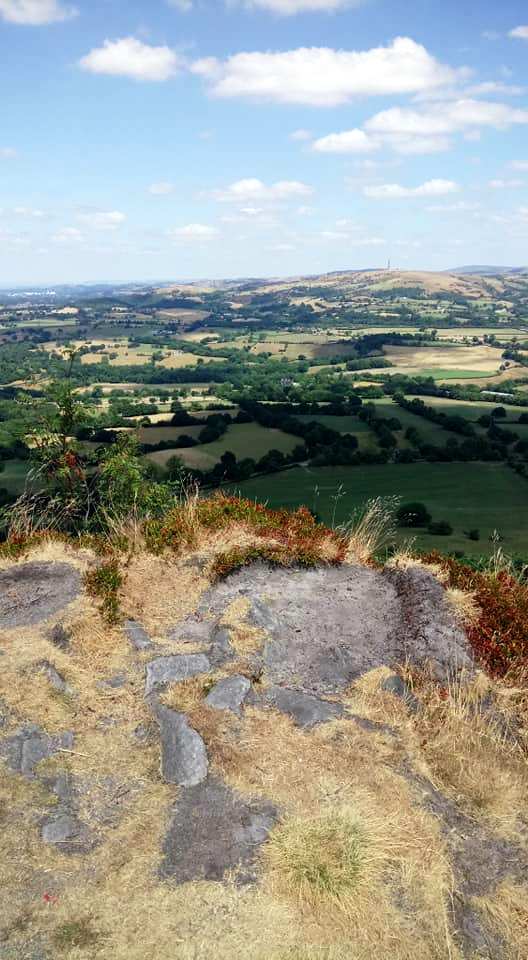 We drove out to Timbersbrook car park and picnic area for the scenic route up. Marianne enjoyed the walk, especially as we contoured around the north of the escarpment and the views opened up. 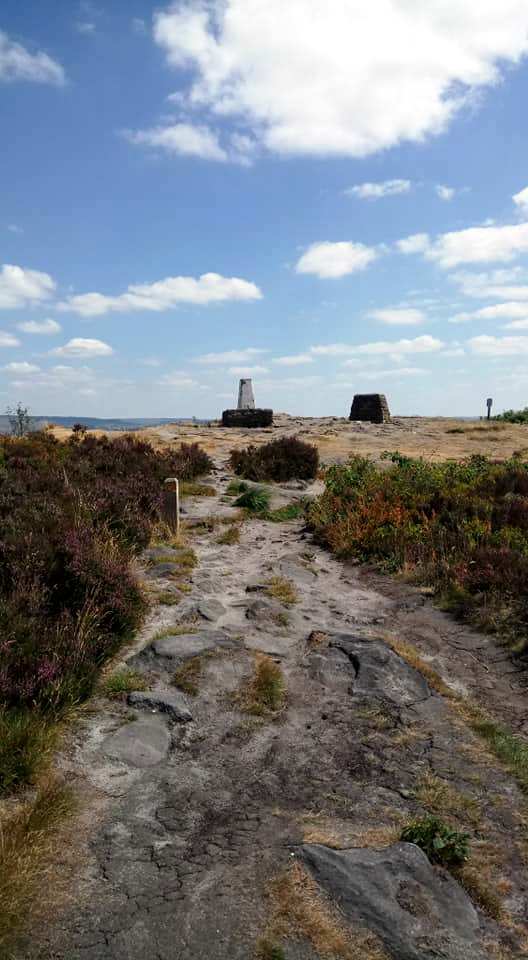 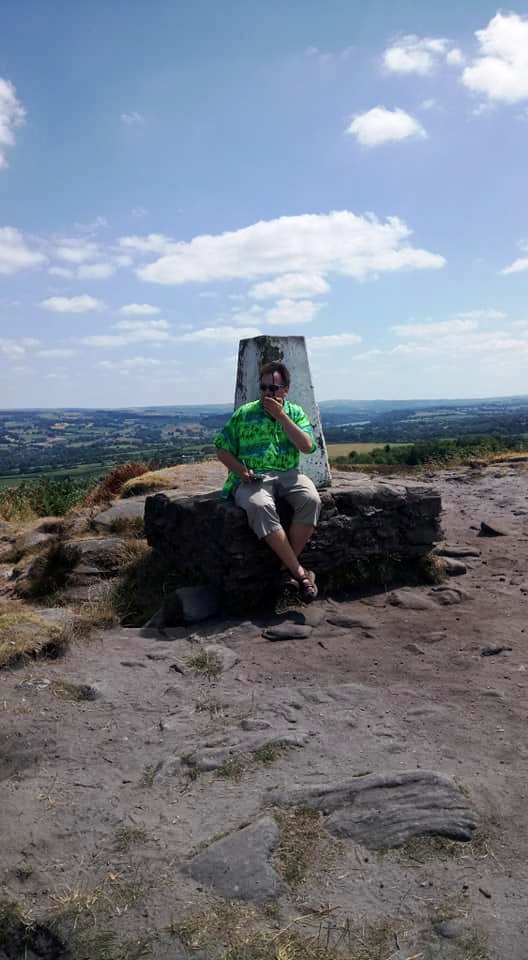 It was baking hot and we were in shorts and sandals. Not wanting to compromise the current domestic bliss, I just took the handheld. Eight QSOs were made, including a certain M0HGY back at the home QTH. Maz wanted to say hello so I supervised the greetings message! 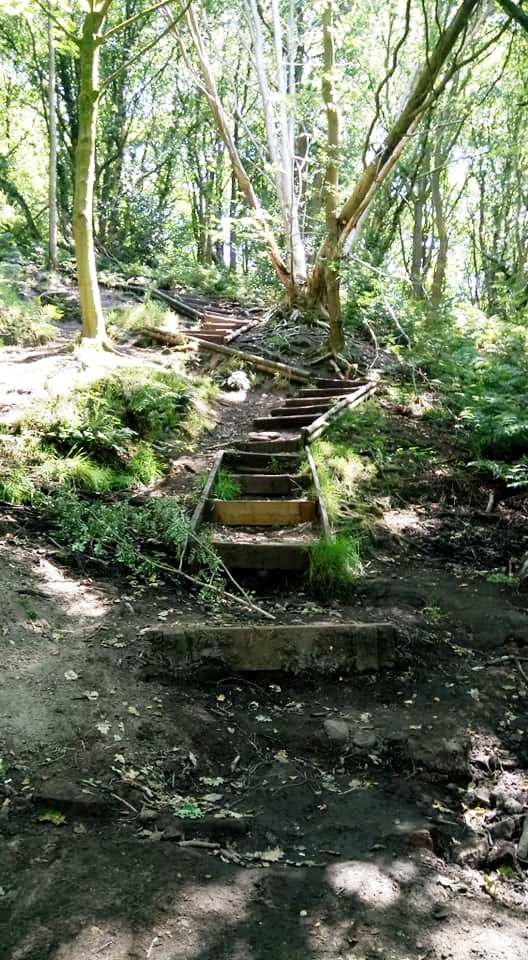 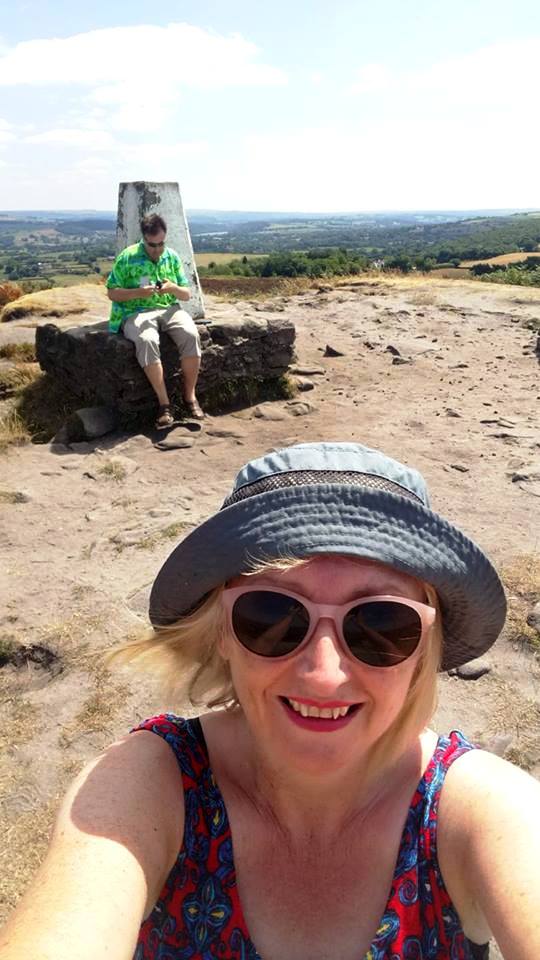 You will know you have cracked it when Marianne is willing to sit beneath an umbrella reading a book for an hour while you operate. Oh… and she has to pass the passing hailstorm test as well.

willing to sit beneath an umbrella reading a book for an hour while you operate. Oh… and she has to pass the passing hailstorm test as well.

Thanks Gerald, that’s set the healing process on my sternum back a couple of weeks!

The photos are now edited in to the original post above. So there is now photographic evidence of the unlikely tale of my XYL enjoying a SOTA activation with me

Unfortunately, I fell off my wagon with a thud last night. We were invited to a friend’s barbecue and he was most insistent that I helped him get through a cask of very good ale. I gave myself a night off my self-imposed alcohol ban, but how I felt it this morning. The phone rang for some work and I politely declined. It rang again for some more tomorrow though, so I won’t be too out-of-pocket, and I now had a clear afternoon to enjoy the continuing fine weather, and go and play on my new FT8 toys again.

So I returned to Cloud summit, but this time on my own, and via the normal route straight up the stairs and redeveloped path from Cloudside. In fact, I tell a lie - I didn’t go to the summit at all. I went to my other occasional spot by the cliff edge before the main summit area, about 15m lower down.

On the drive I was intending doing 6m FT8, but at the last moment I decided I couldn’t be mithered setting up the guying kit and SB6 (6m Moxon) - so went for the lazy 20m GP option.

This actually proved a good decision, for there was some DX about, and I was receiving it on the display of WSJT-X. I chased all the DX I received, including BA, JA, HL - but didn’t get through to these. I was surprised to find I was RXing the Far East at nearly 4pm local time, but maybe that’s the magic of FT8 for you.

I did make 16 QSOs, all 20m FT8, mostly Europe, but the clear highlight being FR5FC - Reunion Island.

I will be back out on 20m FT8 again soon - there’s clearly some good DX to be had, despite my 5 watts QRP.

A mere three days after wanting to walk up The Cloud, Marianne invited me to do so again. She talked about calling at the supermarket first for picnic stuff, so I figured I might get away with setting up the 20m GP. Eyebrows were soon raised though when my rucksack appeared, instead of just the handheld that was anticipated!

Well, not the point in the woods where the paths go off in three different directions, all of which end up leading to the summit. We took the central one, and were on summit shortly after. Several others were on the summit too, so we veered off and positioned ourselves on the big rocks overlooking the Cheshire Plain.

Marianne made an immediate start on the picnic lunch (Tesco ‘Finest’ chicken & chorizo sandwiches, reduced from £3 to 99p - bargain, pineapple and melon fingers and Rice Krispie squares) while I set up.

I decided, initially, to avoid FT8 and CW, so as not to be antisocial to Marianne, and so plugged in the microphone. However, conditions were far from great. I managed to work SP9AMH and S2S with S57MS/P on S5/BR-019, but then nothing in the next ten minutes. Marianne was still enjoying her lunch, weather and views, so I quietly reconfigured for FT8. After working OK5CW, SP9UPH and SP9TNK, things went quiet, and Marianne was agitating to go.

We descended on the Gritstone Trail all the way this time, enjoying the better views from the northern edge of the hill. The lower part of the path - a steep descent down some very tall steps and potentially slippery webbing - did not meet with Marianne’s approval, and so a mental note was made to take the more graded track down to the road in future.

Yet another day’s hiking with Marianne was planned for Wednesday 29th August 2018. These really are fine developments! Of course, suitable walks to her specific and demanding tastes need to be carefully selected. She doesn’t like uphill, especially steep (a bit of an issue for SOTA I guess), she doesn’t like bog or mud, and isn’t the biggest fan of wind or rain - but then, who is?

I had just the walk in mind, inspired by my 71km circular of G/SP-004, G/SP-013 and G/SP-015 from a couple of weeks earlier. I’m now feeling rejuvenated and inspired to attempt that circuit again BTW. It will be completed 2-3 hours quicker this time too, but won’t top 70km - as I intend to learn from my mistakes and not make navigational errors this time!

Anyway, that’s for another day. The route - which is part of the big circular route - planned for the OM + XYL outing today did not include any SOTA summits. So the first priority was to get out of bed at 0415 UTC and get an early activation of The Cloud G/SP-015 done.

I focused on 20m FT8 as is usual for me at present. However, first I went to Mike 2E0YYY/P’s frequency of 14.325MHz SSB, where he was loud and clear from Walton Hill G/CE-002. Thanks for the point Mike!

On FT8, I then made 17 QSOs into 13 DXCCs. A couple of these were quite interesting - SV9 Crete and EK Armenia. Again, there was lots of really good DX being received on the WSJT-X screen. I’m going to land a spectacular haul one of these days…

Back home, and Maz was getting ready for the outing. We drove up to Gradbach Mill (the site of the old youth hostel) and had an early lunch there at the outdoor cafe. We had taken two cars to this point, as the planned route was linear. We left Marianne’s car at Gradbach, then drove together in mine up to the Cat & Fiddle. The walk back to Gradbach via Three Shires Head was probably about 5 or 6 miles, and met with Marianne’s approval.

I’ll have to think of some more for us to do together - but, would you believe it, she does keep mentioning about going up Kinder Scout or The Cloud again!

Now you’re slimmer she must have mistaken you for a new bloke or something.

great work, keep it up. Ignore the QRM from side frequencies…

This will be doing wonders for your health. You just need to keep it going for the next 50 years.