I have previously activated Pillar (G/LD-006) and Great Gable (G/LD-005) this year under my foundation callsign of M7MZB, but thought I would spend a couple of nights on the fells and try out a new FT818 on HF on these summits, while also including Kirk Fell (G/LD-014) and Scafell Pike (G/LD-001).

I set off after work on 15/10/2020 and locked my bicycle to a tree near Wastwater at Netherbeck bridge - it was getting dark as I set off up the path alongside Netherbeck. This was a clear night, and fine weather was forecast for the next couple of days, so I was quite looking forward to some easy walking.

By 2000hrs BST I was at the col between Haycock and Scoat Fell. I setup my tent and then jogged back down the path to fill my water bottles and pouches (I use a Sawyer Squeeze for water filtration). I dropped the water at the tent and then jogged onto the summit of Haycock. this is not a SOTA summit, but many local chasers collect Wainwright summits (WOTA) . I made six contacts from the summits, and advised the chasers of my plans for the coming days. It was a brilliantly clear night, and the whole of West Cumbria was visible, with the Seaside resorts of Lancashire also clear across Morecambe bay. I was just using a VX6 HT and RH770 antenna.

Back down in my tent, with dinner cooked, I had a chat with a coupe of earlier contacts on 2m using a VX6 HT. I was using my summer tent, which makes use of trekking poles as tent poles - but it was such a still night that a tent was not really needed.

Next day it was off up to Scoat fell where I made a couple of WOTA contacts at 0800 BST on 2m before heading onto pillar G/LD-006.

I started with a slim-jim on a Sotabeams tactical mini pole for 2m - connected to an FT818 and soon had 9 contacts. Then it was on to 40m, for my first ever HF SOTA activation. I was amazed at the pileup that ensued (I had spotted myself).A spent almost an hour on the summit and made contacts all across Europe. I was amazed at how well the FT818 worked on just 6w. 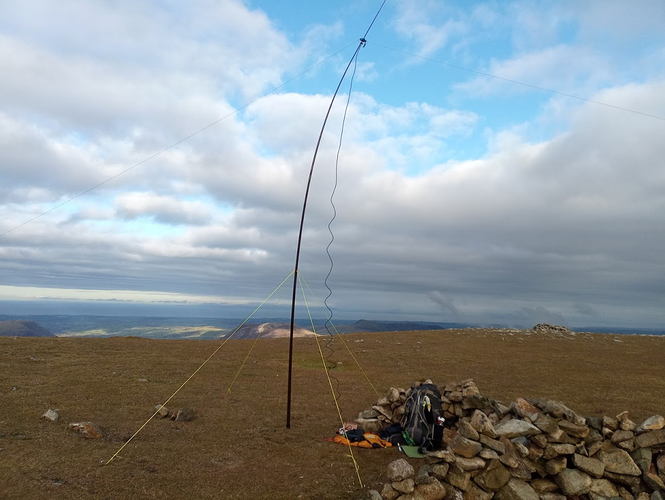 After the pile-up quietened down i was dismantle the pole and head across to Kirkfell. It was a very pleasant walk across Lookingstead and down to the Black Sail pass. Rather than follow the iron fence posts over KirkFell crags to reach the KirkFell plateau, I opted to skirt round the Ennerdale side for a bit of a scramble. there are two gulley routes on this side - a red gulley (the most frequently used I think) and a grey gulley. I opted for grey; the lower reaches reminded my of Lord’s Rake, however near the top there was a very bad step that was a struggle with a heavy pack. 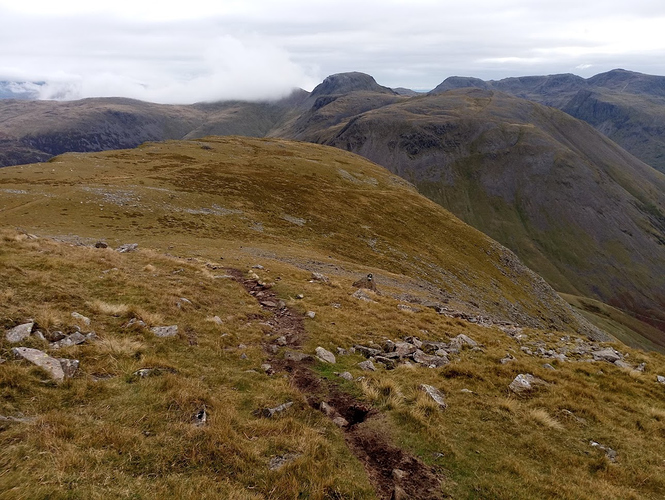 On the summit of KirkFelL G/LD-014 I followed the same drill as Pillar>I made some great contacts on 2m, and then moved onto 40m HF.As with previously I son had a good pileup going with contacts across all Europe.

The descent from KirkFell was certainly easier than the ascent and was quickly arrived at Beck Head, ready to start the pull up to Great Gable G/LD-005. This is an ascent and descent have done many times. I use Harvey maps for navigation, and Great Gable is great example why OS can be poor choice in some aspects - there is lovely looking footpath marked on OS maps, running in a straight line NW from the summit, this is anything but pleasant on the ground! Anyway, today I ascended on the NNW face which was uneventful. The mist had descended onto the summit, and it was starting to feel a little chilled. I decided to just use a 2m handheld and made 7 QSLs. 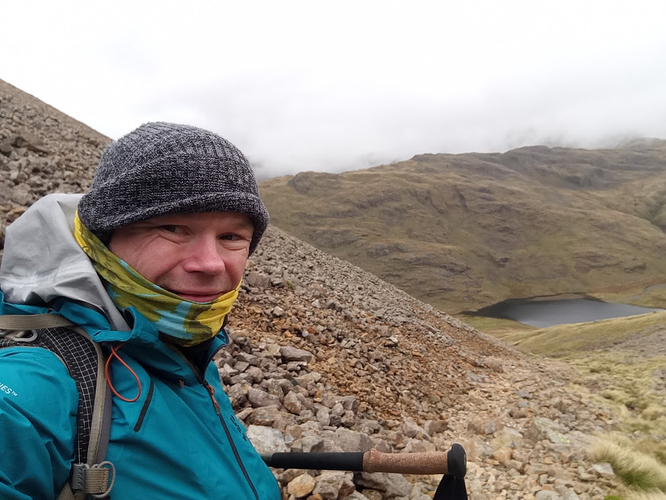 Descent from Great Gable was via Aeron Slack it wa now bout 1600 BST and starting to cool - ence the wooly hat on the image above. I always enjoy this time of day on the fells when I am out camping - other walkers are hurrying down to the valleys before nightfall, whereas I can be heading in the opposite direction with plenty of adventure left to realise from the day.

I walked past Styhead and Sprinkling Tarns, and up to Esk Hause, where I raised my tent on the top of the Hause. Before starting on dinner, I erected the fibre glass pole again for some 2m operation in the evening. 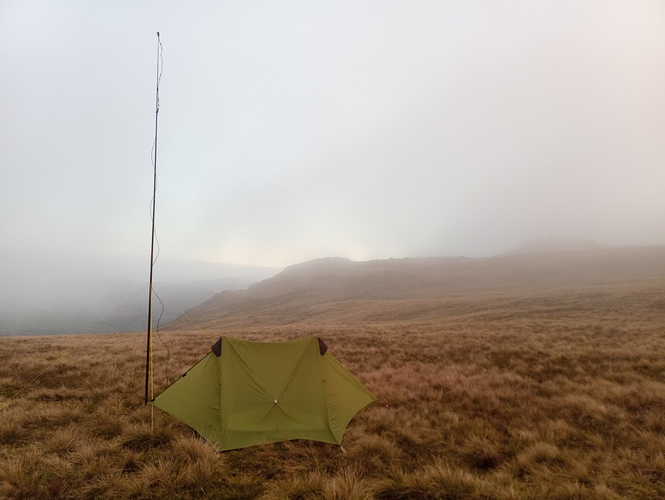 I made a few good contacts that evening, using the FT818, including a good chat through repeater GB3LD.

Next morning it was off up to Scafell pike G/LD-001 where I reached the summit at 0800 BST and started on the VX6 HT with RH770 on 2m. I quickly made 8 contacts, the first being G7CDA, with contacts in Scotland and Wales also following. It was a misty and cool morning, with condensation dripping of the antenna by the end.

I moved away from the summit cairn and started setting -up for 40m operation. After spotting myself I had a huge pile-up with many contacts around Europe, and further contacts in the UK. This being Saturday, there was a contest running, so it was much more tricky to find a free frequency. I had to shift frequency half way through when a contest station decided to stomp on top of me. I can’t complain though, after all SOTA is a type of contesting. 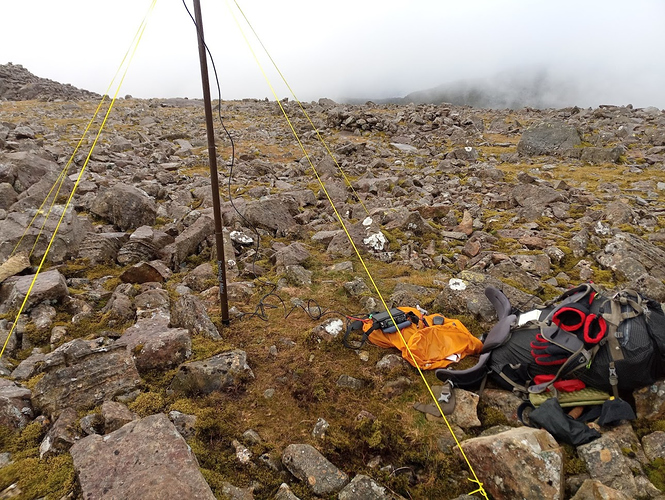 After operating for about an hour I started heading down. rather than take the tourist rack via hollow stones I headed across to Lingmell, and followed Lingmell nose down to Wastwater 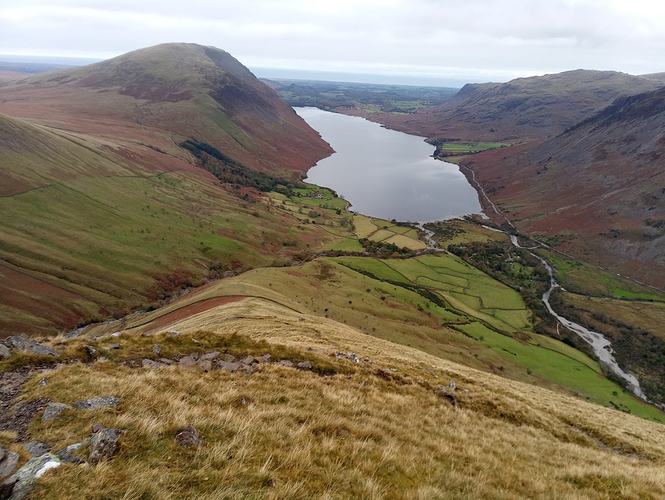 At the foot of Lingmell it was then a short walk along the lakeside road to Netherbeck bridge to recover my bicycle. On the rid out two days’ previous I had forgotten to bring the key to my bicycle lock, so I had had to leave it unlocked (but in a location few venture). Fortunately it was untouched, complete with packet of Jelly Babies in the paniers.

It is a short cycle ride back to my QTH from Wastwater, and I was already making plans for an attack on Illgill head as soon as possible.

I was pleased with the operation of the FT818 on 40m. I was using a rather heavy duty 40m antenna with 10m of RG58 (and a separate run of Rg58 on the Slim Jim). I planned to make a linked dipole from lightweight wire, with a Rg174 as the feed.

The 3S2P LiPo (5200mAh) also held up well and had a good 30% of charge remaining after the activations (noting I had used it for a good length of 2m operation from my tent also).

looking forward to doing the same route in December to pick up the winter bonus.

What a great trip! I hardly recognised Scafell Pike - no crowds that early in the morning.

I have a theory that you can never be alone on the summit of Scafell Pike. I live not far away so have put this to the test on several occasions at uncivilised hours.

As an example, at 0300hrs I was woken on Esk Hause by a group of two or three loud individuals walking past my tent (I think they were heading down, but I didn’t poke my head out to check)

Great read and an excellent outing. Long days on the hills and with a radio. !

As an example, at 0300hrs I was woken on Esk Hause by a group of two or three loud individuals walking past my tent (I think they were heading down, but I didn’t poke my head out to check)

Many decades ago* I once took a winding and staggering route from the Wasdale Head Pub after a convivial evening back to the campsite - but I don’t think we got that far off our intended path.

*So long ago the ice had only recently retreated.

Greetings 2E0OMB…great report and photos. Thanks.