Just a quick report to say thank you to all of the chasers, there were so many, Phil Spector’s “wall of sound” came to mind nearly every tine I called CQ or QRZ, apologises to those of you that I didn’t manage to work . .I was going to do an early morning activation on the 11th ,saw this sunrise from the apartment, had a cup of coffee and promptly fell asleep!!Oh dear. 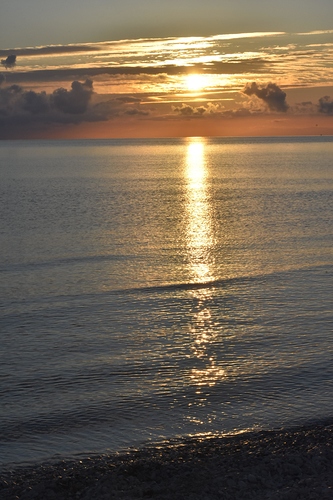 I had to cut short the activation on the 16th rather abruptly as the gentle breeze became a little less gentle (it was difficult to stand) and the cloudbase descended reducing visibility and making it cold and wet. I was on the air for about four hours on the 11th, 3 hours on the 16th and 4 hours on the 18th May, logging a total of 289 QSO’s on 20 metres. Special thanks to 2E0FEH, SQ9RNW, SA4BLM and PA1BR for the spots. I think the best DX was KD1CT and the most unusual was LA4CIA/AM in a Boeing 737 at 35000 feet over the ocean (the aircraft’s callsign was LNNGE).

At one point on Saturday 18th during a particularly hectic few minutes. I received a report of “59 001” , had my first contact onto Guernsey, MU2GSY and first QSO with one of the new intermediate licence calls G20EFZ 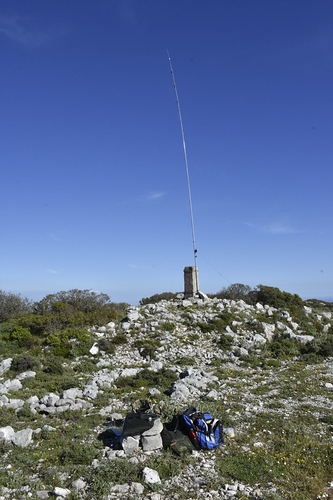 Looking to the south 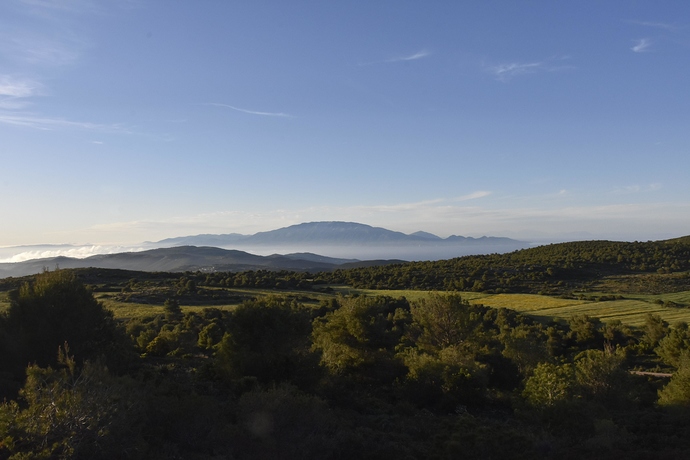 As an aside I travelled through Manchester Airport and had more trouble at security with the metal zips on my trouser pockets, the camera, laptop, radio equipment and batteries all went through without question.

Nice pictures. Nice to get a big pile of chasers when on a holiday SOTA activation too.

However, G20EFZ is not a valid call and there is no current “new” UK intermediate callsign format. IL calls are are still of the format 2E0???, 2E1??? (or 2M, 2W, 2I etc.) There is plenty on Google about the owner of this station making up his own format of call for some time despite the error being pointed out to him. Alan G20EFZ of Windsor is going to be 2E0EFZ. You can change it or delete in your log Colin. I’m not too sure MU2GSY is valid either, GU2GSY?

I’ll do a bit more research , I did query the call, I must admit that I hadn’t heard anything about a new set of callsigns, but it’s in my log. If it was a transcription error or a genuine mistake I may amend it. If it is not a valid callsign I’ll delete it from the sota log.
Apologies to Lionel, MU0GSY, I inadvertently demoted you to MU2GSY when I wrote the report

You worked me immediately after you worked him and you did log his “callsign” as sent to you, I listened to the exchange when you queried its validity. This was discussed by the Management Team who identified that he continuously sends this false callsign for some obscure reason

Thanks for confirming the exchange, I’ve not entered the QSO’s for the 18th yet so I will not enter this one.
I presume someone has had a quiet word with him before the authorities get involved.
What are the possible consequences of contacting an unlicenced station, albeit unknowingly?

What are the possible consequences of contacting an unlicenced station, albeit unknowingly?

None as far as I know, particularly as you acted in good faith.

How was the hike up there?
Tough for a five year old?
Going to zante sep10 with yl and kids and will bring my sota gear.

Hi Tommy,
I usually park where the road changes from tarmac to crushed rock, just past a quarry entrance, from there it is about 1k to the summit, the first half is reasonably flat,on a fairly good track,(with care you could probably get a car down this) the second half is fairly steep where the track does a zig zag up the side of the hill and is more challenging with larger rocks and is quite uneven, but it is still a walk rather than a scramble. I have seen quad bikes drive to the summit on this track.

As for getting a five year old on to the summit it would depend on how active and surefooted they are.

Be careful driving on the quarry road it is quite narrow and very steep in places with blind bends and there can be quite a lot of quarry traffic (large trucks) on the lower section.

As an aside I missed the blue quarry sign when I went up last time, the trees have partially covered it.