Unable to get out yesterday due to mum and hospital visits. Not sure if I would have been brave enough anyway due to the weather. Horizontal rain, sleet / hail throughout the afternoon in Bayside Melbourne; snow to low levels.
20 metres did not open up until 06:30 hrs with an attempt to work HB9FVF/P on phone. Succeeded 15 minutes later after a qsy and 5x5 signals.
A little later DL3TU/P was worked on CW but was a bit of a struggle.
An hour later I worked DL/OE7FM/p on phone. 4x4 but lots of qsb and qrm. Signal was starting to fade rapidly as I monitored VK8GM and VK2IO attempt an S2S.
Allen VK3ARH was worked on ground wave on CW. Listened whilst Allen worked a weak VK6NU at 0721 hrs.
Worked John VK6NU 30 minutes later on phone at a steady 5x7 peaking 5 and 9
Greg VK8GM was a steady 5x7.

It was difficult to break through to the EU SSB operators. Using the yagi and even turned on the amplifier. Guessing higher qrm levels in EU?
Noted that some VK operators were operating on close to identical frequencies which could have caused issues with reception / chasers in EU.
Mike 2EOYYY/P came out of the noise only briefly but was too low to consider calling. Only G station heard here.
Nothing much heard on 17 metres. Nothing heard from JA.
All up, an enjoyable interlude for the evening and thanks to everyone involved.
Cheers Tony VK3CAT 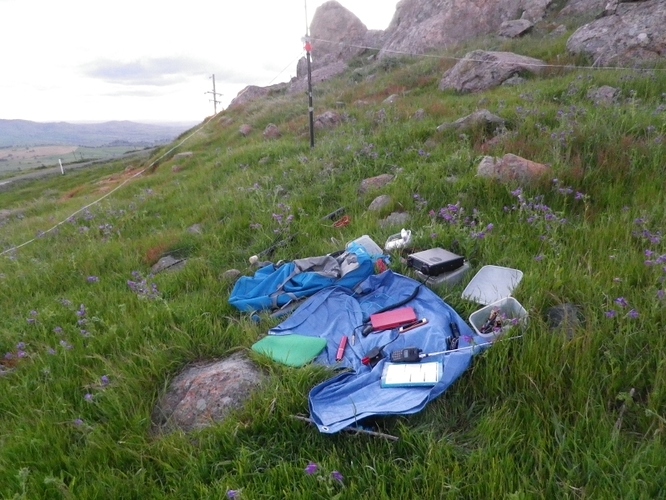 My operating site at vk2/st-044, photo taken just before sundown.

A pleasure Alex to S2S with you from Slovenia which is my first from your country. Signals were certainly up and down at times. The roaring wind noise from a gale did not help either.

My tx was 45 watts into a 9 metre vertical with radials.

Cheers till our next qso, Nick VK2AOH

Here was wonderful morning, temp about 0 deg. C, with very nice sunrise.
RIG - FT817 otput power abt. 5 Watts
ANT - 10 m half slooper with 11 m reflector from oak tree.
Thanks Nick and Gerard for dx s2s QSOs.
Thanks all chasers.
GL and see you on the band.
Alex 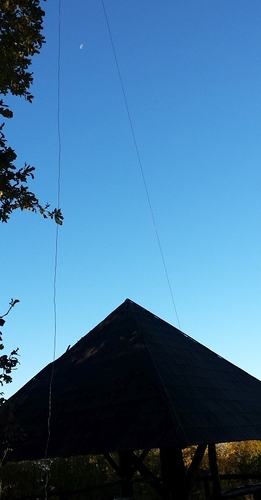 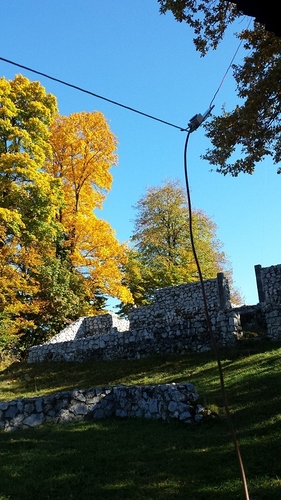 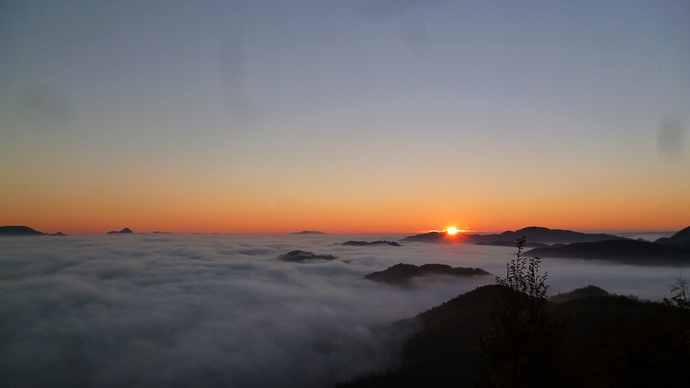 Thanks for the contact Don, the contact with you was the only one that I had into the UK for the event - it really was hard going to pull you out of the QRM - in addition to the OTHR radar I also had sporadic but intense powerline QRM.

I also heard Mike 2E0YYY, but not well enough to work him, so using that as a marker, you did very well to get a signal down here. Continental Europe was certainly easier to work with about half a dozen summits chased from there.

Thanks for the early morning efforts of yourself and the many other activators - plus of course the prime instigators of the event! 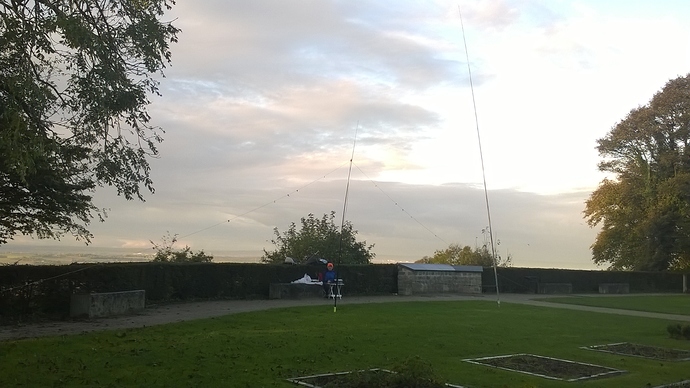 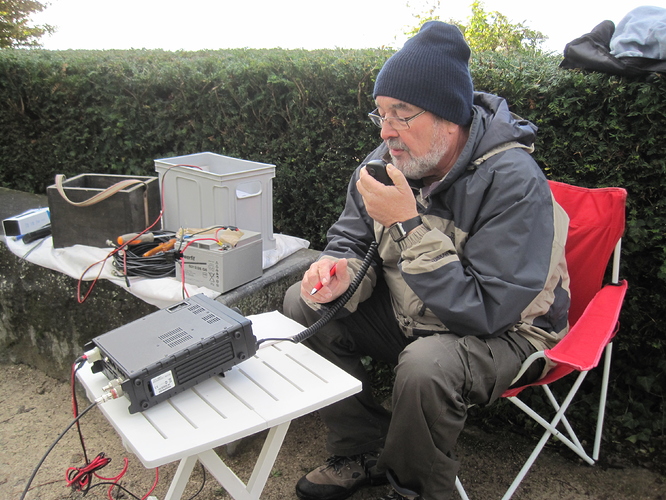 Here a few impressions from DM/HE-003: 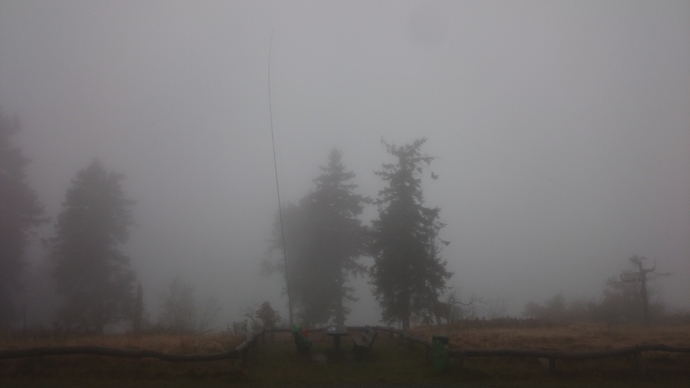 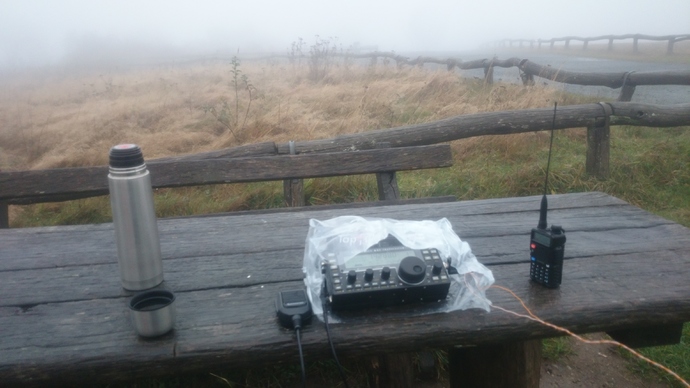 Misty, with light rain at around 3°C.

Thanks Andrew and Mike for organizing this event! Out of the 5 contacts, 3 were S2S

. Sadly, none from VK/ZL. I have heard VK3JBL/p, but then had some strong interference from another station. I hope to be more lucky next time.

Manuel (HB9DQM) and I took some photos of our VK/ZL/EU S2S Party. Given a few implications of our story.

At this point, a bit thanks to all who have participated. There are many beautiful VK, S2S and other QSOs come together. We need to repeat such actions indefinitely in the future!

not a whiff of your signal

I heard you clearly Steve, but very quietly. I tried one call to you, but with your 100w signal being so quiet with me, I knew there would be no way you could hear my 817! So I quickly wrote that one down as a SWL log and did not persist with the calling!

I also suffered phone woes on the summit Steve, with an old Samsung Galaxy that wanted to discharge rapidly, but was extremely reluctant to recharge. Having said that, just looking around the areas of 14.057 to 14.067 MHz CW and 14.280 to 14.330MHz SSB still turfed up plenty of S2S opportunities even without the benefit of SOTAwatch.

congrats to the successful ad-hoc design of the 20m EFHW. I’m glad the spreadsheet works.
I used the same type of antenna here and was quite pleased with the performance. Even when running 100 Watts the open stub was not arcing

My result from OH/JS-037 was 60 qsos in two hours fourteen minutes with 5W and inv-V. Twenty of those were S2S qsos from eighteen different summits (one operator operated twice and two operators were in the same summit). My strategy was operate myself at first on cw, then I jump to chase operators and at least I operate again as activator. Radio weather was very good and stations could be heard very loud. Also personally I was satisfied because my tiny signal could be heard in many places around Europe. Ones I tried to contact DX station in pile up but I give up because 5W loses mostly to 100W (or more).

Temperature was 0 C as expected, but wearing winter overall operating was nice and easy.

heard DD5LP on 20m SSB and called but Ed was being overrun by EU.

Thanks for the comment Gerard. At least I was making the distance down there.

I had a few “OOPS” moments and wrong decisions:

OK, so even with these errors, I managed 5 x S2S contacts but only within Europe. I’m rather proud however that I managed a good contact with Jason ZL3JAS in Christchurch. While tuning the band I heard his 5-9 signal, called him and he came back to me, giving me a report of between 4-4 and 5-5 - considering I was running 20 watts to a dipole and he was running 1KW to a cobweb antenna, I’m happy with that report.

What I found REALLY annoying though, was the fact that I was not able to even listen for spotted VK & ZL SOTA activators as in EVERY case when I went to the spotted frequency a local high powered Russian or Italian station was chatting away to his friend down the road on exactly the frequency. I also had to move several times when I was calling CQ when again an EU QRO station simply decided they would use the frequency to natter on, without first checking it was free!

I don’t know how we could do this, however some web-based way to comment which frequencies are available at each end of an VK-EU contact attempt would be very useful! The EU QRO stations are often not beaming towards VK and hence will not be heard in VK but the VK signal is blocked in EU by these clowns.

Some food for thought for the next attempt.

Thanks Mike & Andrew for arranging this - I have saved the spots and intend totalling up how many summits were spotted as active during the 2 hours - or has someone already done this or has a simple way to do it - I’d be using the print it out and make a list method.

Hi Ed, I totally agree that it’s very annoying when another station starts transmitting on (or near) a frequency one has been operating on for a while. As a QRP station (usually) there’s nothing I can do except move

️️
However, I don’t think it’s fair to criticise Euro stations for working on a frequency “spotted” for a DX station. They may not follow SOTA or be able to hear the DX station. Of course I might just be being too charitable.
Separate note, I was pleased to get my first S2S with a new Association; only to find when I entered my log that the summit doesn’t exist in SOTA

Why claim you’re operating SOTA, when you’re not?

However, I don’t think it’s fair to criticise Euro stations for working on a frequency “spotted” for a DX station. They may not follow SOTA or be able to hear the DX station.

Hi Andy,
That part of my comment was not a critisism - More that I found that unluckily, the frequency chosen by the VK activators was already in use in EU. Of course, as I said, the EU QRO station may not be beaming towards VK and therefore the VK activator would not know that this frequency is not going to get through.

My comment about stations starting up without asking whether the frequency is in use WAS and IS a critisism and goes against good operating practice. As a QRP station, one then has to move if we are going to get any contacts, unless a kind (QRO) SOTA chaser comes along and informs the offending station of his error and he moves off-frequency (as I have done as a chaser in the past).

Back to the first point, I wonder if a website could in some way (perhaps via Web SDRs) indicate which frequencies are in use at the other side of the world in some clear (textual) way ??

Back to the first point, I wonder if a website could in some way (perhaps via Web SDRs) indicate which frequencies are in use at the other side of the world in some clear (textual) way ??

I think it would be difficult to enforce Ed and possibly cause more angst than you’re trying to solve. We know what it’s like trying to find a clear frequency on 40m sometimes (and that’s just with Euro stations). If we try to keep clear any frequency in use all around the world…nightmare! and probably lead to wide scale ignoring.
Anyway, as an occasional victim of the QRO hijacking - thank you for standing up for us!

Before this thread runs to a logical conclusion I would like to thank Ed DD5LP for his contribution to the communication of this event through AR Newsline, WIA, RSGB and other AR media. Once this event was seeded (two weeks ago) Ed was quick to offer his assistance, it would appear Ed has an extensive network of contacts within the AR print and audio media. Thanks Ed well done!

If we try to keep clear any frequency in use all around the world…nightmare!

Hi Andy,
My point is not to keep a frequency clear - rather that, for example when a station in VK - lets say VK2JI/3/P wants to try to get contacts into DL/OE, he finds that in VK 14.315 is clear but in actual fact there is a Russian station beaming into Central/Southern Europe with a QRO signal (quite legally), which cannot be heard in VK. When VK2JI/3/P calls CQ he gets no replies, because no one hears him in DL or OE because of the Russian station occupying the frequency.
If however he had a way to check that the frequency is clear in Europe as well as in Australia, he would see that it is in use and then chose a different frequency, which is free on both continents.

Event Publicity: Glad to be of help Andrew and Mike.

Has anyone on this list got a recording of some of the event, so that I can put together a report on what happened and once decided also set up to say that those who missed this time, there will be another in 6 months.

Unfortuantely I was unable to make a recording during my activation.