I activated this local 1 pointer drive on summit for the VK-ZL <> EU event, as it is close to my QTH, therefore, very convenient to be on air early in the morning without having to get up at any inhuman time: 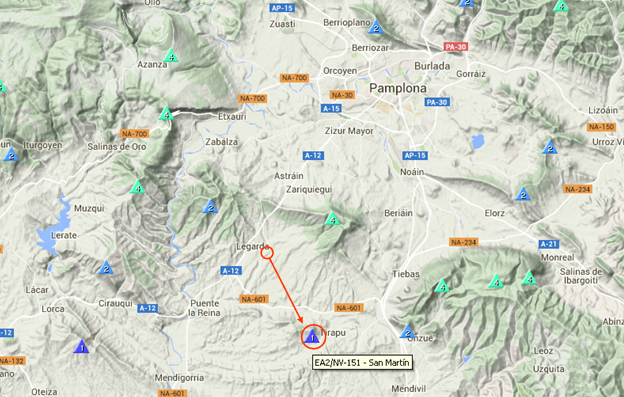 And also because it has a good take-off.

I got up at 5h30 utc (6h30 local) and was ready on air at the alerted 7h00 utc.
I set up by a wooden fence in a place which is not the highest point in the summit area, but it is by the Westmost one, which was perfect in order to be righ at edge before the begining of the slope towards the West (beaming Long Path to VK)

The used antenna was the endfed that Ignacio EA2BD made and gave to me some time ago, but rather than using it hanging as a slope from the top of the fishing pole, as I’ve been always doing since I got it, I had it as an inverted L with the wire inside the fiberglass vertical telescopic fishing pole and the extra 3m of wire coming out of the top end, extended with a kite cord and kept horizontally, so the antenna wire was an inverted L with about 7m in vertical position and 3m in horizontal position.

I tied my wooden walking pole vertically to the westmost vertical post of the wooden fence you can see in the picture and then I tied the telescopic fishing pole to this mentionned walking pole in a way that the base or bottom end of the fishing pole was resting on the flat top end of the fence post.
In this way, the bottom end of the antenna was about 1,5m above the ground, which is good to avoid RF ground absortion.
The about 6m counterpoise wire got extended horizontally and winded around and along the top horizontal wooden log of the fence. 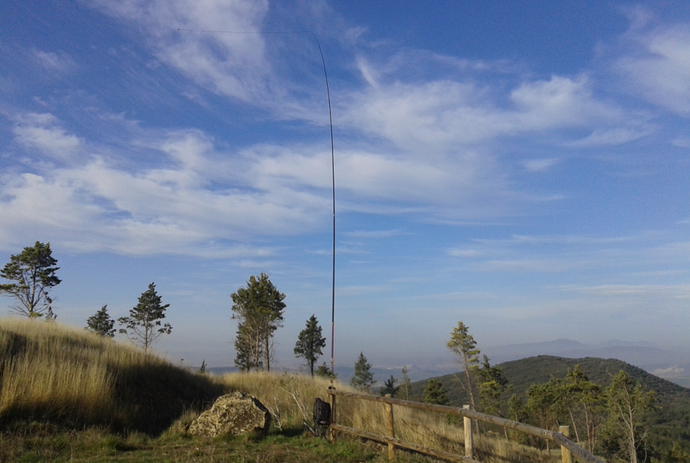 The weather was perfect with a pretty good temperature and no wind at all. We had had amazing max temperatures of around +25 C in the afternoon yesterday.

As soon as I switched on my FT-817, I heard the band noise with pleasure and easily tuned the MFJ antenna tuner for 1:1 SWR.

First I found Ignacio EA2BD/P CQing on 20m CW from a nearby summit just 9 Km in straight line to the North of me, so we made our S2S QSO with huge signal reports both ways. Easy one

Then I looked at Sotawatch on my smartphone and chased the first VK activators.
Bernard VK2IB/3 was my first VK S2S of the day. Very promising…

After these 3 VK S2S the situation was very promising and I was feeling very well and happy to see how nicely my antenna set-up was performing. I had never tried it before.

I thought it might be a good idea to selfspot and call CQ on CW in order to give other possible activators the chance to find me. So I did and I was chased by 5 stations. Four Europeans and one DX, which was John ZL1BYZ. Thank you

I kept looking at Sotawatch on my phone and decided to QSY again to SSB.
Then I chased John VK6NU/P.

Finally, I found Al VK1RX/P on the frequency and I called him with no result.
It was almost 8h utc and the LP window was clearly coming to an end for me.
Then it was my big-gun friend Jorge EA2LU who called him. They completed QSO and Jorge warned Al about my presence on the frequency, asking him to carefully listen for another EA2 station for S2S. Thank you Jorge!

I called him, he seemed to get the EA2 prefix but not the suffix. He sent signal report to me which I copied with no problems at all. I got back with my callsing and his signal report. Al copied my report but he was still not able to understand my suffix. He said I was on the very noise level. Fortunately, Al was very patient and gave me several chances to repeat and repeat my suffix. I did it several times, may be 10 or 15 times until he finally got it right.

After this difficult QSO, I QSYed back to CW and sent a few CQs with no chasers response oother than Ignacio EA2BD for a brief chat.

It was time for me to QRT as I had to go back home to take my son to his weekly rock climbing training and me doing my hike and activation of Mt. San Cristóbal. So I did with a big satisfaction after this morning activation full of DX S2S.

And this is the full log of this activation. 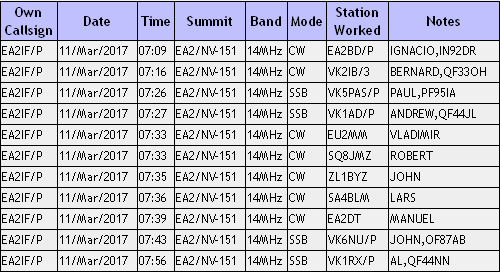 It was very good fun and I really enjoyed this event a lot.

I also feel happy because I managed to convince my friend Ignacio EA2BD to go out and activate, as this gave others the chance to chase another EA2 summit and gave Ignacio a good fun time in the mountain playing radio.

Thanks to all the chasers, the activators, the organisers of this event and my friend Jorge for his key help for my last S2S QSO.

Count me in for the next one.