It was the Low band microwave contest this Sunday and Jack GM4COX had announced he would be out on Queensbury GM/SS-072 which is one of the nearest bigger hills face South. I looked about for somewhere likely and found it was 11 years since I was last up Green Lowther. I’m sure that’s wrong and I must have missed logging an activation but with such a gap it was time activate it on 13cms. I chased Jack on it a few years back on 13cms so it would be a uwave complete

Shortly after I alerted Jack had cancel his activation but he assured me he’d be on from home so that was at least one QSO. I checked I could log in to the KST uwave cluster thing on my phone and I could. What I should have done was confirmed I could use the program from my phone’s small screen, more later.

WX was meant to be warmish and cloudy with intermittent sun shine. That was accurate. The wind was cool at times but it was OK. I feel a little light frazzling that may have happened despite the overcast cloud. I parked in the car park near the cemetery in Wanlockhead and having checked all gear was stowed I set off. The computer says 1hr35 to the top and I did it 1hr20 walking but I stopped for some photos on the way. The route follows the Southern Upland Way walking route to the Golf Ball then along the access road to the furthermost transmitter site. The Golf Ball is a major ATC commercial RADAR and the other sites are Aircraft radio RX and Aircraft radio TX.

There have been some changes in 11 years. 1st there is now a ski run with ski tow. Also a memorial to a RCAF pilot who crashed in 1941 has been erected. 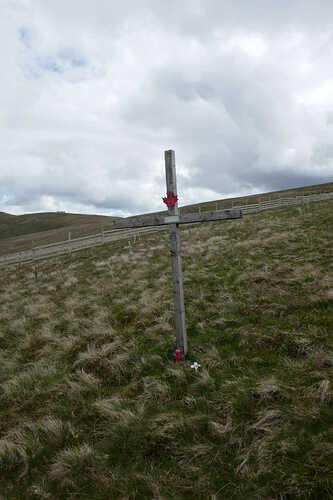 Here’s the view back. The village is Wanlockhead. The people in the middle ground where planting trees. 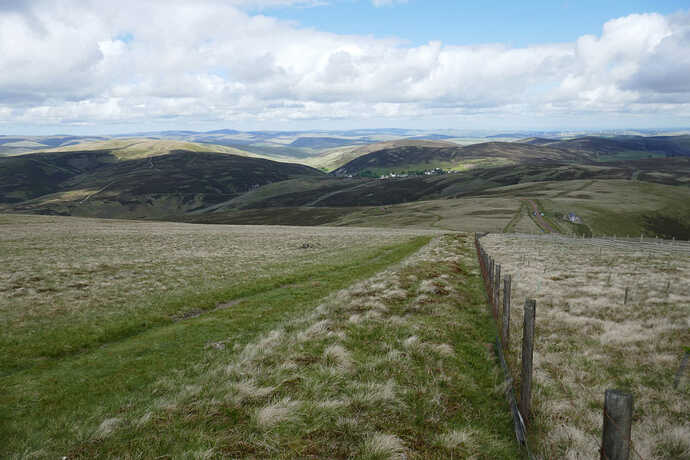 Next, and this became clear talking to local walkers and cyclists later, significant work has been done to the Golf Ball in the past weeks. This site, because of the Golf Ball, is clearly visible from a huge area of Southern Scotland and several people mentioned they could see the crane at the site and the Golf Ball move for a few days/week. That was whilst the scanner array inside the radome (Golf Ball) was changed.

And here is a man size RADAR L-band antenna and feed system. Peak power is in the GW range for the RADAR here. The old dish is laying on its back and you can see the L-band sized waveguide leading to the feed horns which are under a cover. You can see what looks like a black 50Ohm waveguide load possibly on a circulator sticking up. 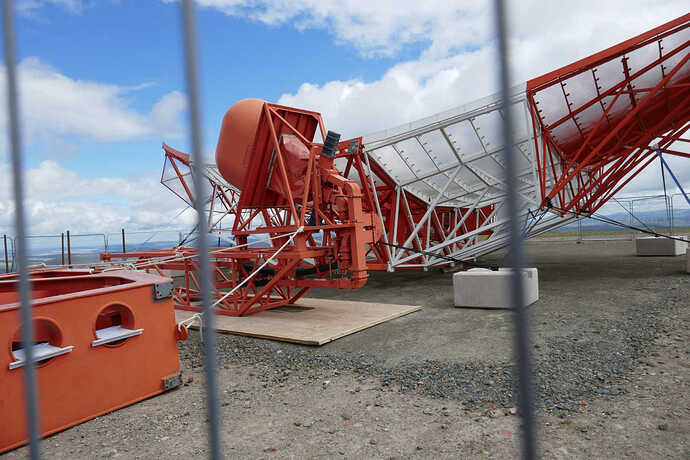 Here’s a view of the business end of the feed. There are a couple of standard sized fork lift pallets to give some scale. Everything is tied down to concrete blocks. The antenna is obviously not light even if aluminium. Yet it is tied down to 8x 1.15Tonne weights. It does get windy up here 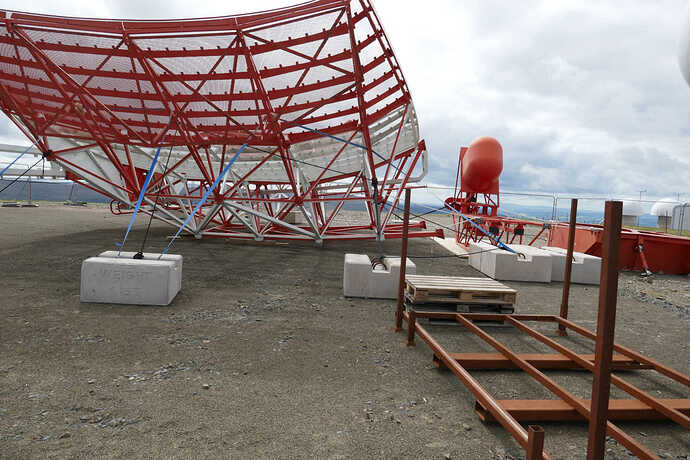 My own 13cms antenna looking somewhat inadequate by the big boy’s antennas. Even going from S-band to L-band, my antenna would only be twice as big as now. There is a length of LMR400UF running down to the transverter. 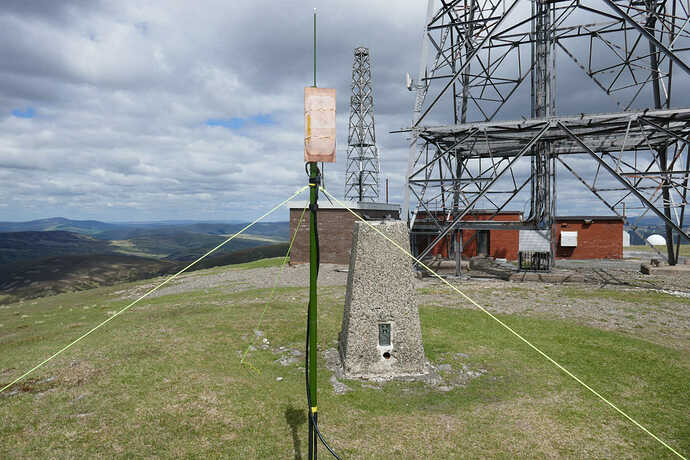 Looking back along the ridge to the BT wireless station then the NATS RX site then the RADAR. 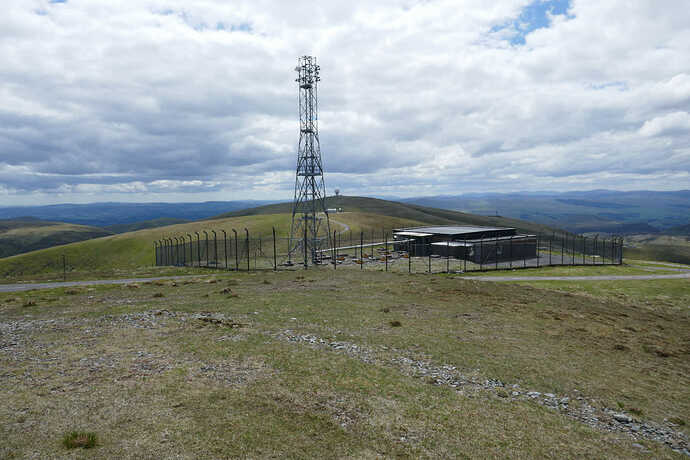 Something’s not right here… where is the wall of BT 4/6/11GHz dishes? They were taken out of service from 2007 onwards and the site was changed sometime between 2015 and 2019.

Here’s the 2008 view when 35% of the dishes had been removed, the South facing dishes, the dishes facing us are point North to the site at Kirk O’Shotts mid way between Glasgow and Edinburgh. The South facing path was to Riddings Hill (aka See Morris Hill GM/SS-274) 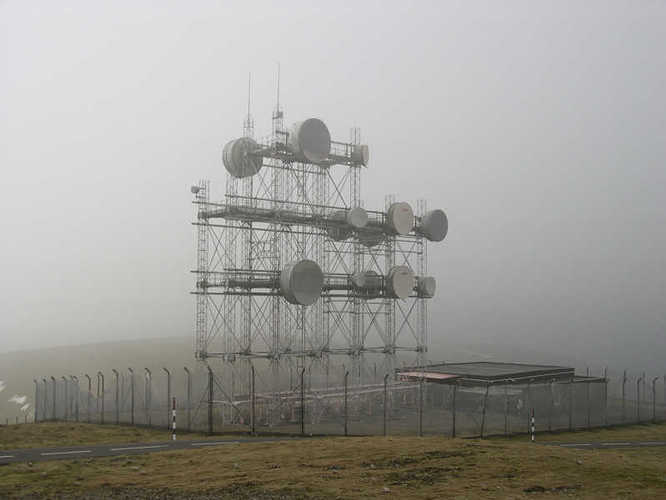 You can see the waveguides to the feed horn here. That blue ratchet strap is 50mm wide to show how big L-band waveguide is! 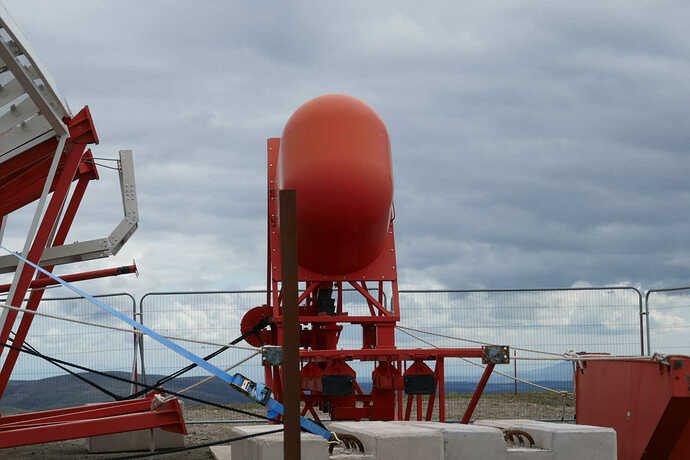 There seems to be great effort taken to make the 2 waveguide runs the same length despite the physical difference in where the 2 feedhorns are located. It would be nice to have a 23cms amp that had enough oomph to be able to warm up the waveguide load. Still we can dream… 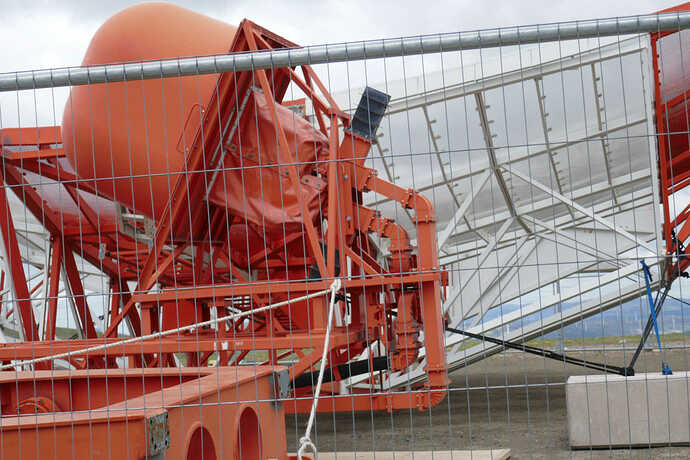 So how was the radio.

Apart from the 13cms setup, I had my 2m ribbon J-pole on a weedy thin Chinese pole I bought years back. This was hand held because I forgot the second guy kit. Anyway on tuning about I heard a voice I recognised, Allan GW4VPX. He had a significant pileup running so it took a while to break in. I don’t know who was more pleased with the QSO, 2.5W Jpole to 5W Jpole. Allan was on GW/NW-014 and that was a 51 both ways 266km 2m FM QSO. A nice start.

Next I managed QSOs with Jimmy M(M)0HGY and Tom M(M)1EYP who were on a border raid for uniques, they had 4 possible summits lined up, all completes for me. So after two further S2S QSOs that was GM/SS-273 completed. Whilst Green Lowther is a brilliant site, commercial QRM excepted, 2m conditions seem “up” to me. Most channels from 145.400-145.575 had a QSO taking place when I hit the squelch open button. I called CQ SOTA and worked 4 more chasers including another S2S when Dave GM6BIG and Jack GM4COX appeared and we all QSY’d to 13cm.

Jack was an easy 55/55 so it was worth bring the gear. Dave is the GB3CSB beacon keeper but is now putting a 13cms system together. “RX is about complete” he’d told me “but TX is just some stuff knocked up”. He was 59 on his lash up TX. That’s when he told me he can see the Golf Ball at about 20miles range. “I’m only putting about 2mW into a 2.4GHz Wifi patch antenna that’s been tweaked for 2.3GHZ with some copper tape. The antenna is in the window sort pointing your way.” That was just so much fun for him to so strong for such a tiny signal. Then the true silliness took place, the driver PA was removed and Dave was 55 when running 125microWatts to an indoor patch antenna. We switched to FM and Dave was not quite fully quieting but much better to listen to than on SSB. We waffled amongst ourselves for 30+mins.

After that, I tried to announce myself on KST but whatever I typed just made the display on the phone go bananas. Need to practice more with KST. I tuned about and heard Brian GM4DIJ/P calling CQ contest from his /A holiday home. Easy SSB QSO and that was 3 on 13cms which was good. I tuned and scanned about but heard no more. Back to 2m and after a few more chasers Andrew G4VFL/P called from Blake Fell G/LD-031. 59 on 2m and he said “Are you ready on 13?” a quick QSY and he was 59+++, louder on 13cm than 2m. That was a bonus, it was QSO 4 on 13cms so qualified on 13cms and due to the convergence of forces outwith control, Andrew and me were not on 13cm at the same time last Bank Holiday Monday so I missed a 13cms complete on Shalloch on Minnoch. Today’s 95km QSO mostly made up for that. I did get an unexpect 125km QSO with Nick G0HIK last Monday on 13cms so that was OK.

Back to 2m and another complete when Jimmy and Tom appeared on See Morris Hill GM/SS-274. They were awfully loud and I said to Tom “I think your hill is LOS to me.” Tom replied, “Jimmy has just pointed out the big white Golf Ball on the horizon so if you are there, yes it is.” And yes, I was and it is!

After that it was pack up and back down to the car. I had a lovely refreshing can of Red Bull to give me wings for the drive home. This time I didn’t pour half of it over the car centre console and driving mode/traction control switches like last Monday. That resulted in a 45min session teaching new swear words to my neighbours on Saturday as I fought to remove the trim panels and switches so I could clean the sticky crud off them. They were stuck solid until I did this and I could not engage super sporty madman mode or tame the traction. Still I got them out without breaking any trim or mounting tabs. I don’t want to do it again though.

All in all a great day, 4x S2S, 2x complete, 4x 13cms QSO and Dave given some success to boost his construction along. That will be another 13cms chaser in the area.

All that expensive and no doubt accurately positioned hardware and it’s held down with 5 tonne ratchet straps! Great to see bodging taking place at all levels of RF communication.

As for your report, well done! Can’t wait until I retire and have time for more and different aspects of our great hobby.

I only packed 2m-fm today as it was a fair slog to the summit. Great pile-up with 33 in the log with one C4FM contact with Simon GW4TJC/A at Rhyd Ddu. 8 s2s so thanks to everyone who made my log.