I read with interest Rob’s (G4RQJ) comments in the Sota News about the improvements to the path up NW-051 so decided to take a look for myself and play a bit of radio as well.
No points in it for me though as it was my fifth activation this year and 62nd overall!
The path direct from the car park has been closed for a long time whilst the work was in progress so I was keen to try it out.
The gentle path from the gate to the first stile has been tidied up but is basically unchanged. The path from the first stile to the second stile has been widened and smoothed out but was quite slippery and muddy today after all the wet weather but should be OK underfoot when dry.
The major changes are after the second stile where the path steepens quickly and previously needed careful ascent. Stone steps have now been constructed at critical sections and it is a much more pleasant experience.
As Rob stated the wooden ‘staircase’ on the final approach has been replaced by a very impressive stone version.
Some photos here: 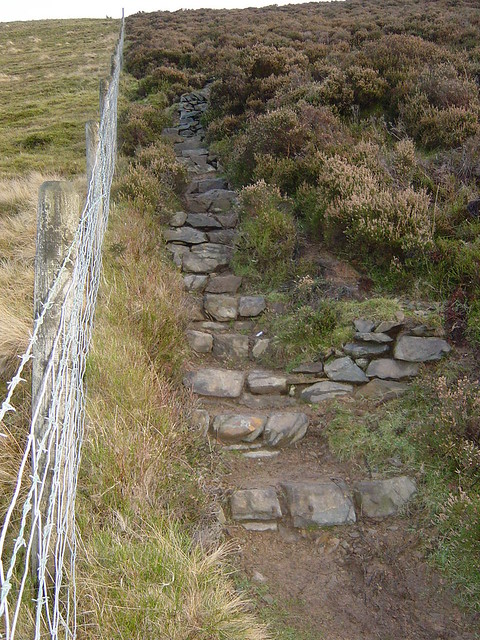 Arrived at the summit at 1315 and spent a leisurely two hours in the sunshine
operating on 4m and 2m FM.
Two S2S, firstly with Brian GW4ZRP/P on neighbouring Moel Fammau, NW-044 and then with Richard G4ERP/P on WB-002. I had already worked Richard from home when he was on MW-013 so it was good to catch him on his fourth summit of the day!
13 contacts on 2m and 6 on 4m.
Thanks to Steve GW7AAV for the spots.

P.S.
There are major roadworks at Loggerheads which are probably going on until the end of January 2010. Only caused a minor delay today but will be a problem at peak times.

It’s quite a tasteful job that has been done on the path. Certainly better than I remember that section. The last time I was up in September the path was still closed and I went straight up the bank. Last Saturday, the new path made it quicker and easier to get to the top. 18mins from locking the car, parked by the ticket machine, to touching the cairn with Brian “Young Mr. Grace” G(W)4ZRP taking 18m30s. I need to put more bricks in his bag when he’s not looking.

There’s something really nice about Foel Fenli, I don’t what but I’ve always thoroughly enjoyed myself whenever I’ve been up there. Sounds like you had a nice day, it was fairly moist last weekend and extremely quiet on 2m for a Saturday near the start of Winter Bonus season.