When the SOTA bug has first bitten, and objectives are set, the weather you are prepared to climb a peak is often not a consideration. Or, to be honest, which hill, there are plenty to choose from. The primary goal is to collect those uniques and points. When I first started out I would often go out in poor visibility. Snow or horizontal rain was not a bar to the enthusiastic hope the prevailing conditions would clear when the top is reached. That wishful thinking has occasionally backfired. The opposite is also true. The walk to start in beautiful clear weather only for your target of the day to quickly become shrouded in a dark unappealing cloud. Either way, on more than a few hills the only way to know you have reached the activation zone is with GPS. I have, on occasion when weather conditions have been too bad, been known to reach the top turn round and walk back off. The activation of the summit was the main motivation, appreciation of the surroundings was not given much thought.

I’ve now climbed in excess of 500 SOTA summits and I’m constantly looking for reasons to go out to redo some of the hills I have previous been on. There are many I originally climbed 10 years ago, while finding my feet in regard to climbing and setting up a SOTA station, that were activated in less than ideal conditions or done very quickly.

Waun Rydd (GW/SW-004) in South Wales was one such summit. The activation was done late in a February afternoon in 2008. The weather that day had been reasonable with the first activation of the day on Mynydd Troed (GW/SW-009). I know it’s nice to pair it with Mynydd Llangorse (GW/SW-015), I was new! By the time we had reached the top of the long walk in to Waun Rydd the clouds had dropped to the summit and there were no views. I only spent half an hour activating on 2m making 11 contacts, walking back down before dark.

The weather forecast this last Bank Holiday promised one of the best ever weekends. This provided the ideal opportunity of climbing Waun Rydd in some of the best conditions possible.

Waun Rydd is a long walk in from any direction and knowing the area is very popular an early start was required. Along with Helen a non-radio friend came along for the walk. Helen planned to walk the plateau collecting Geocaches while I activated the summit. The drive down was in low hanging cloud almost all the way and had hoped it was an inversion and not just fog. The previous day there had been a lift on VHF and I hoped conditions were still going to be up even though I only really planned for a HF activation. 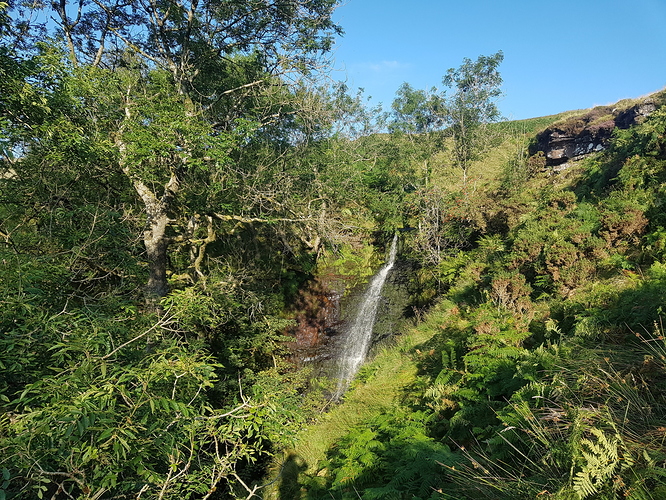 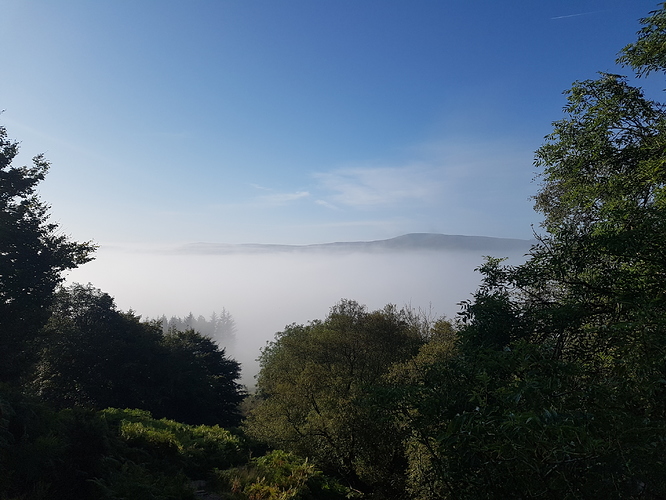 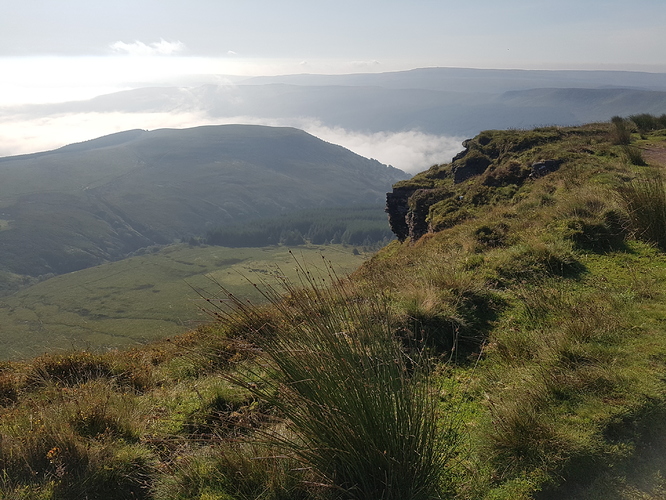 We reached the parking at Blaen-y-glyn still in cloud. Climbing the path alongside the waterfalls we very quickly ascended into very warn sunshine. By the time we reached Crag y Fan Ddu I was properly out of breath. But now the short sharp steep climb was over. Looking back to where we had started the cloud inversion has started to dissipate but the views were already far better than I had previously experienced on this walk. The views to the north do not reveal themselves till you reach the junction of several paths just before the final gentle climb to the summit of Waun Rydd. The view along the northern ridges were stunning with an ocean of clouds below us. In the distance a few islands peaked above the white sea. Looking west the summit of Pen y Fan was clear and was probably already very busy with walkers. I much prefer being on hills that have few people on them. 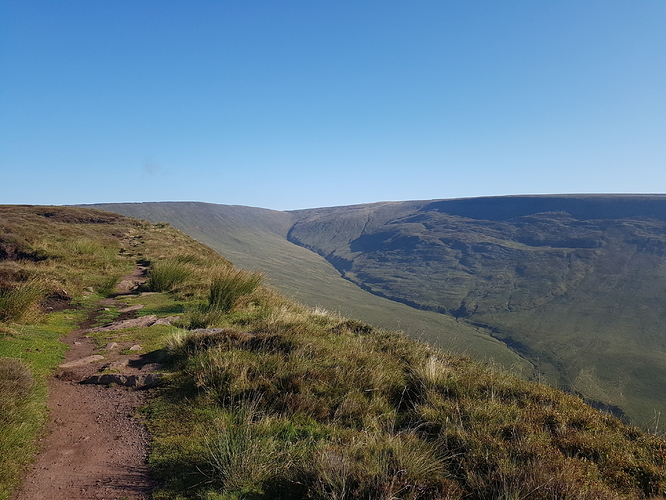 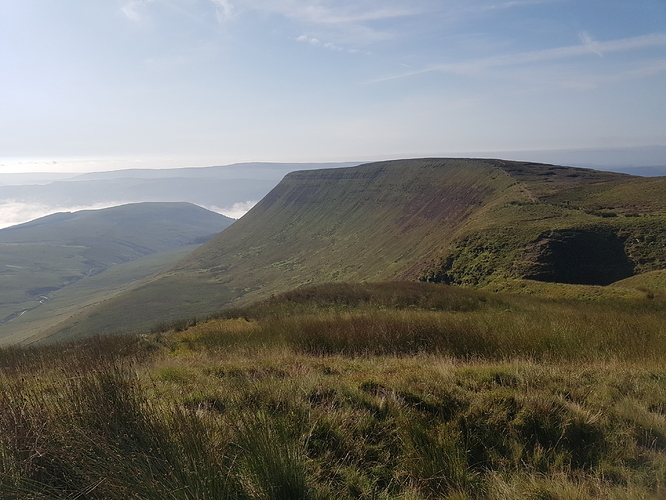 I had no expectations on what the activation would be like I had carried my FT-817, amplifier and “holiday antenna” for 20/17 and 15/10m. The simple antenna which has provided good service on many of our trips overseas. Before setting up a quick listen on 2m (Helen and I intended on keeping in touch on 2m while she wandered off looking for Tupperware) found David (2E0IXM) activating Shining Tor (G/SP-004) for a quick easy S2S.

20m was my starting band and another S2S with Peter (OE5AUL) and Sylvia (OE5YYN). Once I found a clear frequency I was quickly into a pile-up that lasted the next 45 minutes. What was surprising was the very short intra-G skip over to the east where most who called in had extremely strong signals, most unusual. Looking back at the Chiltern Ionograms for the period I activated the E-layer appeared to be reflecting right up to 15MHz! I waited for a lull and took a break for a drink, it was getting very hot by now. Not knowing how long I had for the activation before Helen intended returning for me I reconfigured the antenna for 17m and spent a short while chatting to chasers. A call to Helen and she was on the return giving me just enough time to try another band. I changed the antenna to operate on 10m and easily made 14 contacts including another S2S. All this time my friend who had come along for the walk had patiently sat enjoying the stunning views and fascinated by the numerous Miner Bees that flitted about. On Helens return she was happy for me to try yet another band. I had also carried my 40m vertical so quickly had another 3 S2S. 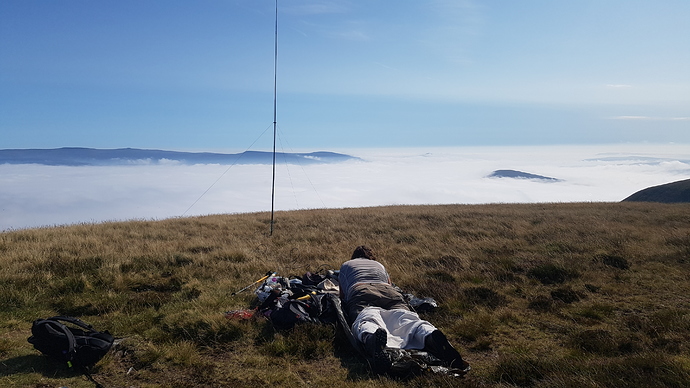 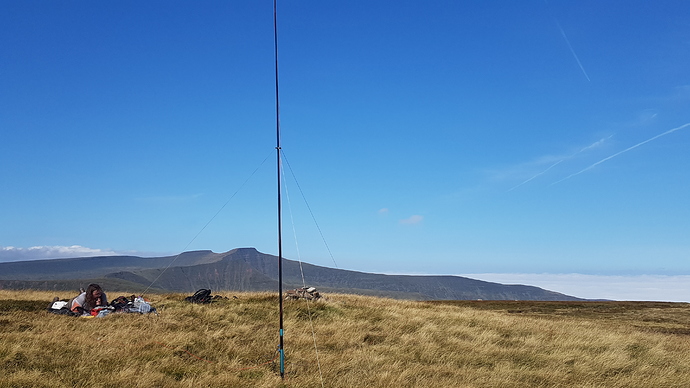 We had been on the summit for 3 hours or so and I was feeling the effects of being exposed for so long in the midday sunshine, it was time to leave. Just as I was packing away Helen looked on SOTAwatch and noticed Ian (GI0AZB/P) was activating Slieve Binnian (GI/MM-003) on 70cm and tuned to his frequency on my Alinco hand-held. Ian was there, not weak and scratchy but well above quieting! I called back and we had an easy contact over a 191 mile (307 km) path on 433MHz. I said my 73s and heard Esther (GI0AZA/M) say she could hear me too so I called back to say hi. These two contacts were the high-lights of the activation. The strange thing was I struggled to make more contacts on 70. Stewart (G0LGS) “down the road” in Cheltenham was weaker than Ian had been. My final contact was again with David (2E0IXM) walking off Shining Tor to round off the activation nicely.

We walked off the summit via the Canadian air-crash memorial collecting clues for a trail of geocaches that leads along the ridge towards Fan y Big and the “diving board”. I didn’t feel up to the extra walk of more than 3 miles, we still had over an hour to walk-off from where we were, so we returned to the car.

This activation on Waun Rydd will become one of my most memorable. Weather was hot but not too uncomfortable to walk in, the views were spectacular, (pictures will not really convey) and radio propagation was unusual.

Thank you to all the chasers (and non-chasers) who contributed to a wonderful day.

I remember back in the 60’s, when I was a new G8 and we could only operate on 70cms and microwaves, a local club went out to operate a 70cm contest from a high hill location that they always did well from. On this occasion they heard very little, couldn’t find anything wrong with the RX, and packed up and went home. When they got back they set the station up on a members lawn to have another go at trouble shooting and to their surprise the band was full of DX! So they operated /P from that garden and got a decent score. Later they theorised that their contest location had been above the temperature inversion and signals from below it could not get through it to them! I wonder if you experienced the same thing from Waun Rydd?

It was the time of day and year, this point in the sun- spot cycle and the antenna I was using that surprised me most that 20m sounded like 40m at the top of the sun-spot cycle. Rare conditions.

I had thought the same thing about being above the inversion. 2m was the same with a very good path to Shining Tor but only a handful of contacts otherwise. Usually from a summit you can easily hear repeaters but they were quite surpressed and I didn’t hear any simplex conversations.

FYI…when I saw the spot for you on 2m I pointed the beam towards Waun Rydd as I usually get that one from home…nothing heard. Great to get you whilst I was on Ruardean Hill the other day…an easy one for a change😁