Two Poles till the Goat

It was more than a year ago that I got my first 5m-long fishing pole broken. Of course, the pole is not used for fishing but rather for supporting my λ/4 vertical antenna for 14MHz. While I was excitedly placing my radials around, I dropped through a deep layer of soft snow and ended up on top of the pole, which broke without hesitation. Fortunately, at those early days of my SOTA activations, I was carrying another antenna, an EFHW wire with 1 to something BalUn at the end. Just in case that my home-made vertical antenna fails. So, it was time for the spare one to show its might. Either because there was no tree around to raise it up or simply because it’s a bad antenna, I made zero contacts that day. 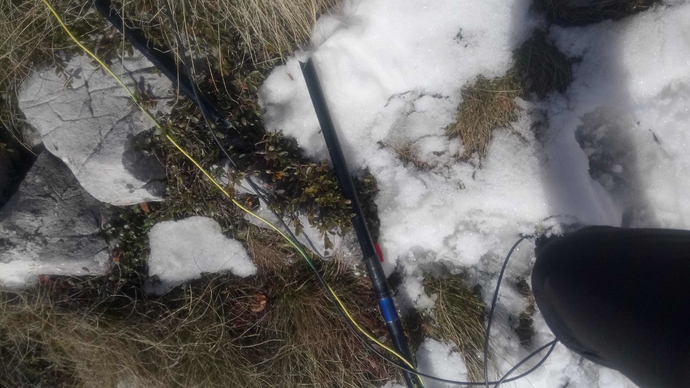 Then, during a slow fall afternoon, I decided to earn quick 4 points by activating a lively hill with scary name (Zmijina glava, which in Bosnian means Snake’s Head) near my QTH. Quite frankly, I do not even remember what happened with that pole, but it was certainly broken before it was in its working position. Still, I tried to save the activation and do a few QSO’s with my new “number 1-shaped” antenna. And, you know what, I did 12 QSO’s and returned home with 4 new points! 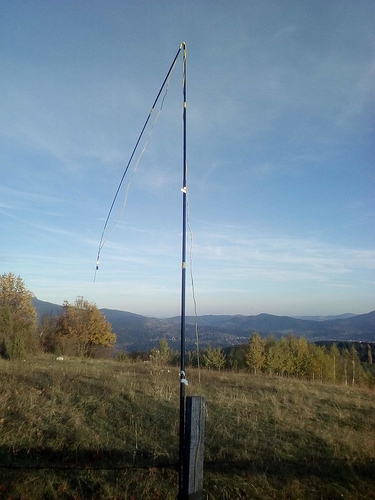 SlomljenaAntenaNaZmijinojGlavi.jpg2448×3264 406 KB
Number 1-shaped antenna, my “modification” of the inverted L, worked well during the SOTA expedition to E7/BO-052.

And then, on the last Friday of the winter bonus period (which happened to be the Good Friday, too), my third pole was destroyed by strong wind on the summit Čador, E7/BO-024, the highest peak of Bitovnja Mountain. This whole trip wasn’t the smartest idea for sure, since the local weather service was issuing something called “orange meteo-warning for wind” and emphasized danger of going to mountains on that particular Friday. But, as we all know, all warning colors fade out when faced with the appeal and fun of mountain trips and SOTA activations. So, my YL Eldina, my life companion and my SOTA muse, and myself decided to catch some fresh mountain air and did a 3-hour snow walk to the top of beautiful Bitovnja Mountain. While we’re somehow enduring the wind, the antenna did not and broke as soon as I fixed it to a pipe, which marks a popular mountain trail during the winter. Eldina then saved the day by holding the upper part of the broken pole for some 5-6 minutes until I got 4 QSO’s and sent two additional unanswered CQ’s. 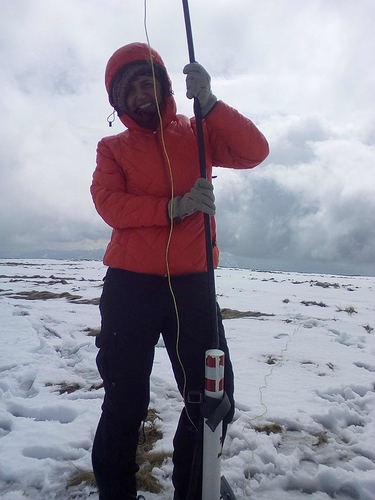 On our way back, I realized that the third pole accident had happened when I had exactly 600 SOTA points. So, it looks like my point pace in term of broken poles is 200 points per pole. And that, of course, explains the silly title of this post. Talk to you on the (20m) band soon. With my fishing pole number 4…