The morning was rainy with poor visibility, but the forecast was for it to improve by late morning. By the time we were packing the car the rain had almost stopped, though visibility was still poor. We headed south aiming for the relatively low Moel-ddu, but were soon driving through rain, and the further south we went the harder it got. As we left the A487 to head towards the parking by Llyn Cwmystradllyn the roads became more and more flooded, with the single track road several times flooded across the whole width, including one deep section not far from the parking. Rain was still coming down hard as we parked by the dam, and we could barely make out the end of the dam and lower reaches of the hill. We sat in the car hoping for the promised improvement, but after spending almost an hour it was still raining hard, and we reluctantly decided to abandon the attempt at 11:30 – we would be tight on time even if it cleared within half an hour. We dithered about heading north back to find a wet weather activity, or south to Porthmadog where we might be able to do Moel-y-Gest if the weather cleared – no winter bonus but a unique for us, though one that we had previously twice failed to activate.

The rain finally stopped as we drove into Porthmadog, and we headed towards the car parking on the A497 we had used on our previous abandoned attempts, but it wasn’t where we recalled or further along that road. We thought we had found some roadside parking in a business park, but then spotted an authorised parking only sign. So we moved on again and instead headed south of the hill, finding an “old road” layby at SH562381. This was more pleasant parking with singing birds. It was now dry but we decided it would be safest to eat lunch before we set off. We risked not putting the rucksack covers on and headed east along the road to take a footpath heading north through a hotel cum caravan site, crossing into the access area at the lower end of the eastern end of the Moel-y-Gest ridge. The footpath was slippery in places as it ascended steeply with muddy sections and wet rocks. As the footpath left the access area we left it to climb on a narrower and even steeper and more slippery path which wound its way through rocks. At least it wasn’t raining – but we were soon getting hot from exertion. Finally, we were at the lower eastern summit – the highest we had previously got! Now we had to find a way down to the col between the two summits and up the other side. We found a way through the rocks down, but the ascent up the other side was more of a challenge, and we had an awkward scramble up nasty wet rocks, all the time looking for an easier way. We continued making our way along, at one stage thinking we had almost reached the summit, but after another difficult scramble discovered there was still a long way to go. We finally discovered it was best to drop down on the north of the ridge, and eventually found a faint steeply angled path which finally enabled us to reached the stone built trig point.

By now the clouds has lifted off of the local hills with Moel-Ddu and Moel Hebog both clear to the north, though it was still cloudy. There was a noticeable breeze at the top and the trig point didn’t offer any antenna attachment points, so we dropped down slightly to the south east. Caroline found some rocks to wedge the MFD into while Martyn spread the HF antenna as best he could without blocking paths. It took Caroline about a quarter of an hour to get 4 contacts on VHF, but then there were no more. Martyn managed 11 contacts on 5MHz before Caroline took over HF on 40m. Conditions seemed a little odd and unstable – probably the remains of the recent geo-magnetic storm but Caroline managed another 16 contacts before losing her frequency. 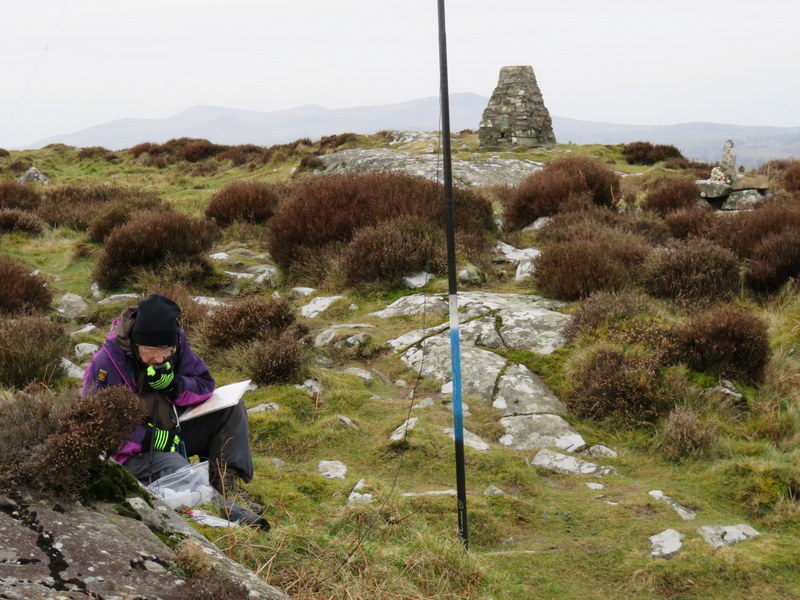 A few people visited the summit while we were there, and most seemed to have come up an angled more southerly path, which looked to offer an easier descent route from the summit. It headed steeply down to cross a stile in a wall from where a path headed roughly south-west to pick up a public footpath which headed south east through rough meadows and emerged onto the Morfa Bychan road by a llama trekking centre. From there it was an easy walk back to the car with a roadside pavement all the way.

Hi Caroline. Thanks for the fine set of activation reports. You and Martyn have tackled some of my favourites, but mostly by different routes, so very interesting to read.

I did Gyrn Ddu from the A499 once. Then I took Gerald’s route from the south, with ~150m less ascent. I really felt the difference! I haven’t explored the Watkin Path ascent to Yr Aran, since I’m starting from Rhyd Ddu (from where I have a pretty easy route).

Shame you couldn’t get into the shelters on Mynydd Mawr. It means also you don’t get to appreciate the massive scale of the Bronze Age burial cairn into which they are sunk.

I’m glad you mentioned the llamas. I had some fun there with my family. No radio on that occasion, but I was told they will carry a light load and sometimes tour onto the hill, so maybe somebody should try them as a goat alternative! Anyway, your way down sounds like the easiest route. Did you record a gps track? The route from the edge of Porthmadog through the woods to the north side of the eastern summit is really steep. It’s direct to that summit, but then you have the scramble over to the western summit.

Did you record a gps track?

I’ll mail you our track.

Right - that’s a lot nicer! Thanks for all the reports and the gpx.

Where I should have noted that the 5 S2S we got on Moel Ddu pushed Martyn past 1000 S2S points.
Caroline M3ZCB