GM/ES second smallest Marilyn
I can see Brimmond Hill from my Westhill office window. It’s about 3km as the crow flies. 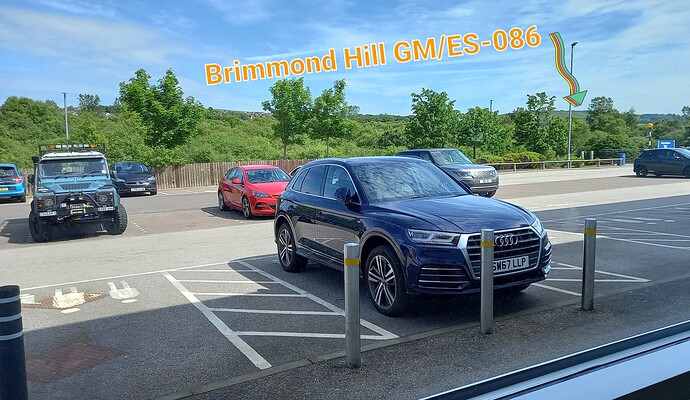 This year I’ve been taking in the various 1 and 2 point summits that I pass by on the way to work. I try to cycle to work once a week and have been activating these by bike. Brimmond was the last one on the list.

The Stars Line Up
A happy coincidence. John @G0MHF was up here on holiday and we’d briefly met at my work. Viki @M6BWA and Rod @M0JLA were also up here on holiday and all would be on summits that morning. We’d have some nice summit to summits on 2m FM and I’d just need to pick up a couple of locals to get the job done.

On The Day
I left home at 07:50 BST for the 52km ride to the hill. I used my gravel bike only because the first 2km was on tracks, as well as the last bit. It’s a good bike to cycle distance on the road though. Everything I needed for the day was in the rear bag.

10:00am and I was as the car park. The initial track was loose but I was able to ride a fair bit of the kilometre and a bit to the top. 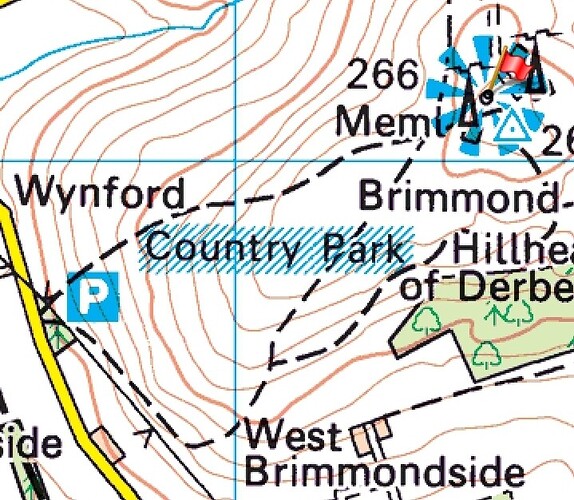 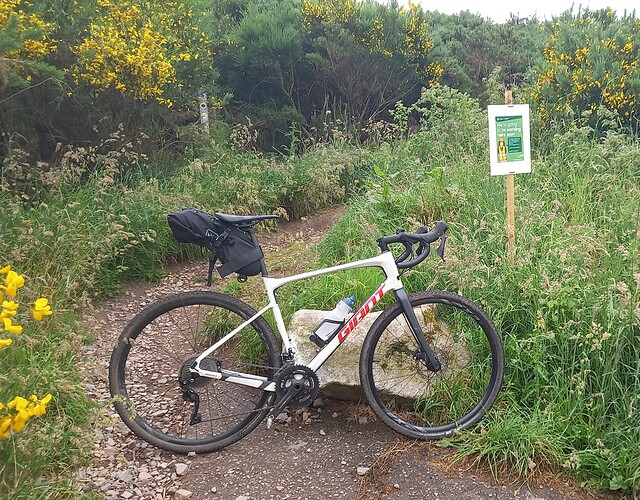 It also has a pleasant summit area, with a trig point and a nice bench. I was being spoiled today! Oh, and the views over the city of Aberdeen and out to the Shire are extensive.

I was an hour early. I was confused by the time John had posted on here for his planned activation of Hill of Fare. I’m sure he’d said 10:30am. I think he’d meant 1030z. Anyway, I had time to kill. After getting no response to a few CQ calls on 2m (I should have read the warning signs) I slung a 41’ wire over my carbon6 pole and got the KX2 tuned up on 40m SSB. 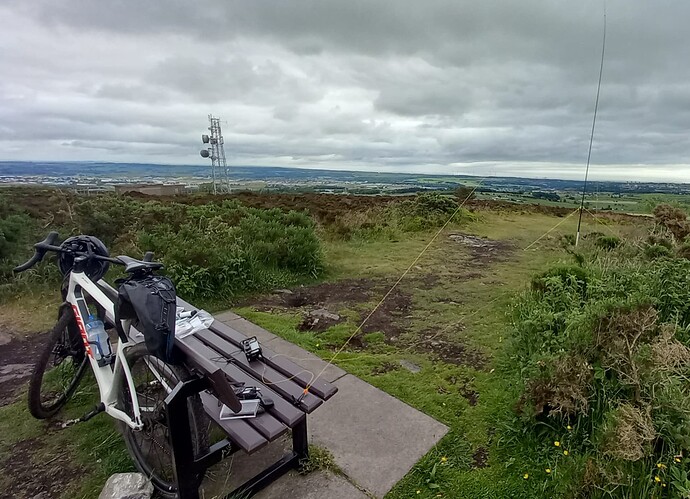 QSB was the main issue today, but thanks to perseverance from the Chasers, I qualified the summit, with 14 in the log. I spoke with a few interested walkers. Got my first “Are you fishing?” comment. They obviously don’t watch Countryfile.

On to 2m then. The carbon pole was redeployed at the bench, set at 45° with the slim-G hanging freely from the top. This is how to use a vertical antenna with a carbon pole without de-tuning it!

I opened the FT-3d squelch right up. There wasn’t any more noise than usual. By now Viki had spotted. She was on GM/CS-030, some 80km to the west. Shouldn’t be a problem, but I couldn’t hear a thing. I knew my signal was getting out OK, as Simon @GM4JXP could hear me in Aboyne. However, he was having transmitter issues, so I couldn’t verify the other way. I was starting to suspect there was an issue.

I redeployed to the west side of the transmitter. I was as close to it as I could get, with a building between and also a chain link fence. I was also about 5m below the base of the tower now.

Suddenly I could hear John on Hill of Fare GM/ES-070. Only 19km away, clear line of sight, but an terrible signal. There was strong pulsing every couple of seconds. This was knocking out his audio. I had to ask for his callsign three times. John was having comms with Viki, who had asked me via John, to QSY to 145.475 for a contact.

Ok, I QSY’d. Time for drastic measures. I dropped the mast right down until the base of the slim-g was touching the grass. Suddenly Viki’s voice appeared tbrough the noise! We made a contact, a very sketchy one, but still it was a contact. 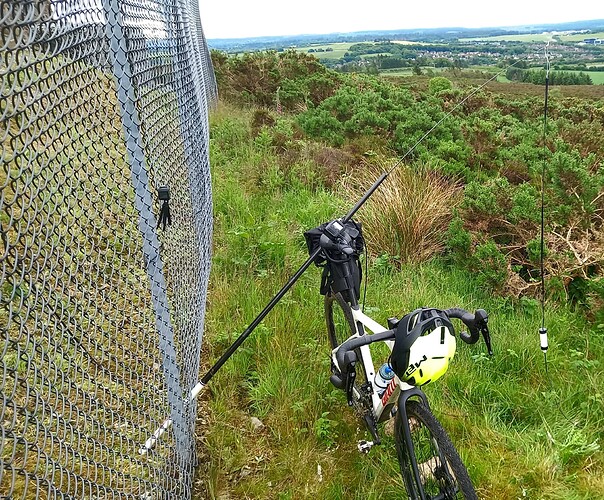 Again, apologies to Viki and John for causing so much drama on what should have been some really fun and rare Aberdeenshire 2m Summit to Summits!

A disgruntled me packed up and rode back down the ascent track. I was at work 15 minutes later. Not as happy as I usually am after a cycle/SOTA commute! 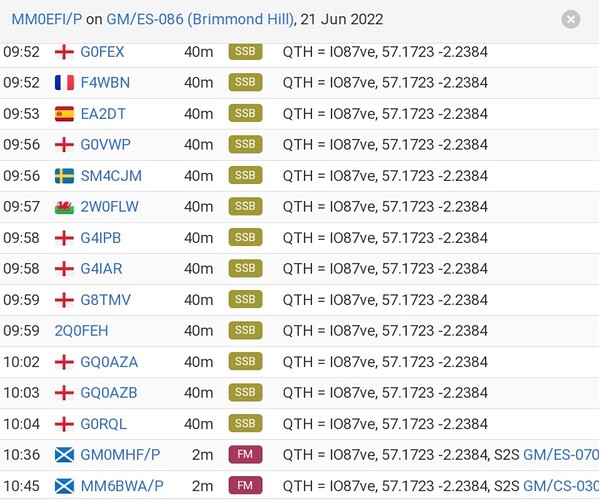 Post-Mortem
I’ve activated hills on 2m FM that have commercial masts before. There aren’t a huge amount in my area, but Morrone GM/CS-060 and Mount Blair GM/ES-035 come to mind. Morrone was the FT3d plus a hand held yagi. No issues at all. Mount Blair was the ft-857 plus yagi and I was working stations in England from there.

Viki told me to get a Sotabeams filter. Maybe I should carry one for those occassions. I have a Yaesu ft-60r at home. I’m really tempted to head back up Brimmond next week with that radio to see if there’s a difference.

Of course using the ft-3d with a stock rubber duck may have got me the summit contacts and helped with interference, but I’m not so sure…

Every day is a school day!

Nice to work you yesterday, sorry to hear about your 2m woes. I’ll echo Viki’s comments about the sotabeams filter. I now have one and it makes a big difference even on my VX7. I previously had an ex-PMR filter that had been tweaked for 2m, it worked well but was big and heavy.

Great report @MM0EFI Fraser! I haven’t got any HF up at the moment from home, so can’t call in to you. Should have something rigged up soon again

Viki told me to get a Sotabeams filter

I’d deffo take Viki’s advice and buy one of these filters. They are only the size of your thumb and will get you out of the s**t on many occasions, especially when you travel to GW or G/WB land - comm masts are on quite a few SOTA summits.

Look forward to your next outing - take care and regards to Mo!

Really sorry my 857 packed in, as I missed MHF as well

There was a lot of granite between you and Viki!

I’m really tempted to head back up Brimmond next week with that radio to see if there’s a difference.

I have LOS to Brimmond from the QTH, if it’s Monday, Tuesday or Friday I can help you test this!

Nice to work you yesterday,

Nice to work you too Colin! I’m going to hazard a guess that it’s our first QSO. G8 is an exotic prefix and I’m sure I’d remember it.

I will for next time anyway.

Yes, according to my log, it’s our first QSO (unless you’ve worked me while I’ve been activating in Wales).

I’m really tempted to head back up Brimmond next week

I’ll look out for your spot as I’ll finally be back at the home QTH by then.

G8 is an exotic prefix and I’m sure I’d remember it.

Oh wow! I’m exotic! Wait a minute, exotic means from or characteristic of a distant foreign country - did I miss an Indyref vote and the breakup of the UK?

I honestly don’t come across many G8’s or GM’8’s for that matter. I know a GM7. Alwsys meant to ask him why he was a GM7!

an Indyref vote and the breakup of the UK?

Having worked Jimmy and Tom S2S earlier in the day it was great to have an eyeball QSO in a Berwick upon Tweed (UK) watering hole. [image]

exotic means from or characteristic of a distant foreign country

Perhaps there is something else you haven’t told us. Look it up on dictionary.com and see definition 4.

I honestly don’t come across many G8’s

There’s no doubt that we are a dying breed, just 21 listed as activators and a few more as chasers, tho’ heaven knows how many of those listed are SK or re-issues, mine was issued in September 1964 so I definately qualify as an OF, and I haven’t yet qualified for SK tho’ I’ve been working on that for 81 years! Its worth remembering that the Gx8+3’s were the first UK ham licences issued without a morse code test, envisaged at the time as a UHF experimenters license, the thin edge of the wedge that led to today’s three level licence.

I have LOS to Brimmond from the QTH

I’ll be in touch Hibby. Might be late afternoon on one of those days if I can escape the penitentiary!

M6BWA I spoke to GM8PKL in Edinburgh yesterday but hadn’t realised he was such a rare beastie! I was thanked by a newly licensed MM7 for being the first XYLin his log and couldn’t resist telling him that I was a little more rare (and exotic??) in that I was as XYL SOTA activator (if grounded at the moment) and sadly there aren’t too many of those around, It used to be said that a female voice can attract curious chasers but it doesn’t seem to work up here. I assumed that I would have my normal 2m and 70cm parties ( say 11 2m and 6 70cm) by getting up to 6 or 8 pt hills but there was just a few keen contacts and then zilch (except on 70cm when it is zilch with bad pulses at ever increasing speeds!) Oh to be fair, I got 4 70cm from GM/ES-012 along with a very dubious 5th into Ayrshire.and 7 2m but that was with calling for 80 mins (while M0JLA was on HF), Harder work than getting up the hill!
Viki

just 21 listed as activators and a few more as chasers

Looking at the activator roll of Honour for “All associations” I found
25 G8 calls, 2 GW8 calls, 3 GM8 calls, none of the other regional calls were present but I didn’t check the club call prefixes.

but there was just a few keen contacts and then zilch

Welcome to my world! I sat on Ben Bhrotain GM/ES-007 a couple of weeks ago, desperate to give 10 points away. I worked two stations in 30 mins of calling on 2m FM, one of which was a random guy in his car /M in Edinburgh. To say he was surprised and delighted would be an understatement! The other chap was also a random contact, in Kirkcaldy, so my signal was getting out, just no one listening/chasing. It’s a shame, because 2m can be more fun that HF and is more rewarding too. 100 miles on 2m with a handheld feels as good as 5000 miles on HF.

Ah well, I blame my eyes, they have a habit of seeing decades in the past while looking at the present, though solder smoke may have something to do with it! I only looked at G8 as that had been the prefix mentioned. I did know of the GW8s and GM8s, having worked them.