@KR7RK
Hi Keith,
I was very pleased with our QSO yesterday. There was a record distance of 9190 Km between us. Better said, between our antennas, as I was running remotely.
HPE TO CUAGN SN.
73,

After more than 20 years break, I returned to the amateur radio. I can not do much at home.

I’ve been doing sota for half a year. Yesterday I had the first contact to NA. Unfortunately I got a cold and fast frozen. So I gave up after 2 hours. But anyway: It was a great event

My equipement was KX2 and 9,80m vertical wire with 5,20m counterpoise

Thank you for organizing 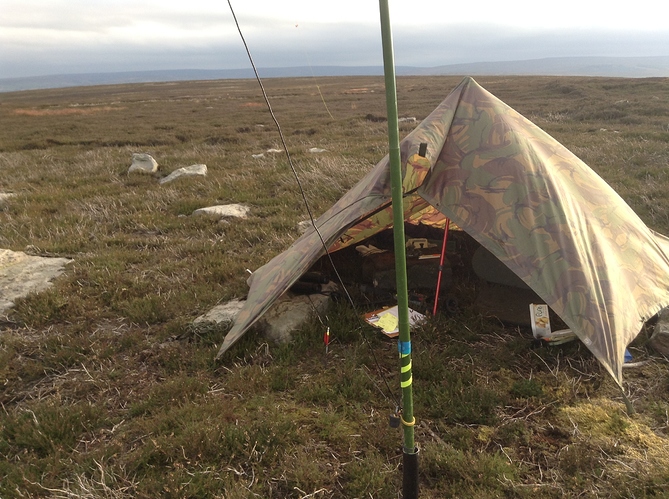 45 mph + winds, 10c and thanks to another post I was reasonably comfortable in my tarp/tent - which I’d only tried putting up in our garden the previous day. Really surprised at how well it coped considering some of the gusts of wind.

And 7 chasers. Perhaps I shouldn’t have been surprised but the QRP frequencies were jammed with contesters at full blast.

An hour or so to walk in, just over 2 hrs operating and another hour walk back to the car, the last mile or so in the dark.

Thanks to Gerald, Barry, and Ed for organizing the event. You picked a great date. I see I have two of you in my log from yesterday - next time I’ll try for a clean sweep :-).

I got very lucky with the weather. The forecast was for rain and snow and high wind. I had rain on the way to the summit and snow on the way back and it was windy, but I had only a little rain while I was on the air. Lots of fog and lots of condensation, but nothing to cause me to shut down. I broke out my winter kit for the activation and was bundled up with my back to the wind and didn’t get too chilled even after 3+ hours on the air.

I made 36 contacts - 15 EU and 21 NA. Most were on 20m CW. Nine were S2S, five from EU and four from NA. I think could have done better, there were activators that I could hear in the clear, but I couldn’t break their pile-ups. There were at least three stations who I heard calling me crystal clear, but when I came back they were gone - QSB got them. And I think I might have had more contacts with better operating - at least twice I had brain freeze on CW where it all turns to gibberish. More experience will help there.

I treated the activation partly as an opportunity to switch to my winter kit and I remembered everything except my camera. I did have my cell phone and took a few blurry pics: 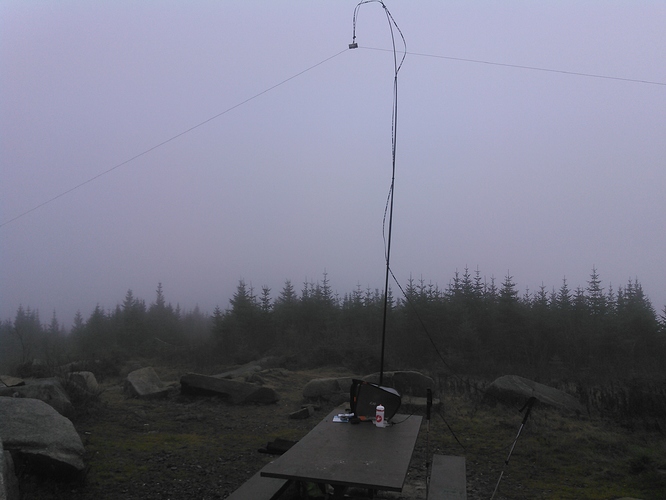 Prepared for rain or snow 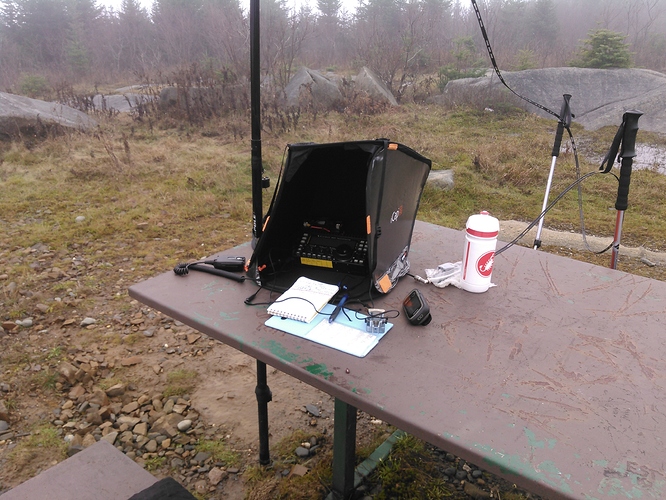 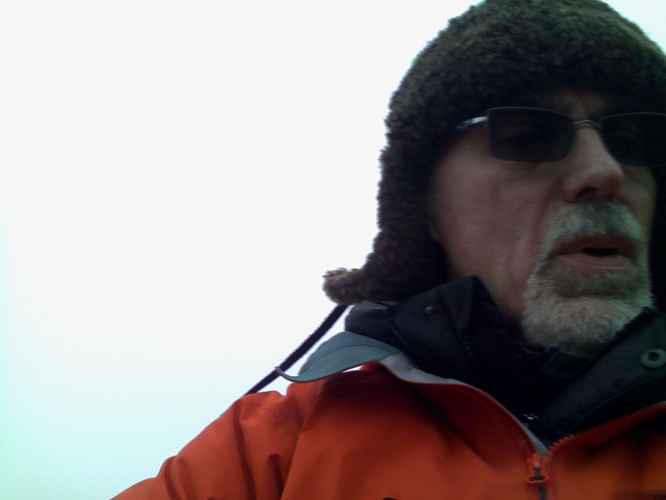 First of all, thanks Ed and Gerald for organising this QSO party!

Not to forget Barry N1EU who very usefully provides a different perspective from across the pond and was partly instrumental in us moving the event from the third to the first weekend in November. I was somewhat sceptical that conditions would be good enough this early in the month, but hey, what a blast!!!

Paul G6GGP (G4MD) and myself were originally going to North Wales for this outing, but the wet WX over there dictated otherwise. After considering several summits, we decided upon Bredon Hill G/CE-003 just inside the Cotswold National Park. The location contributed to several of my contacts as it is with the FF area, with 44’s being passed quite regularly. 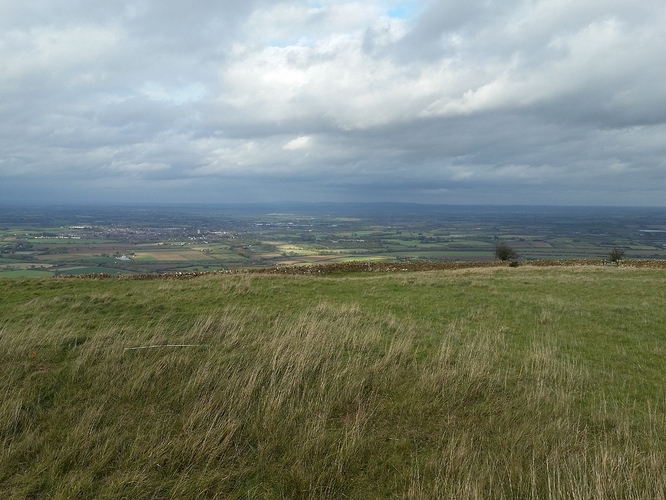 The view out from Bredon Hill G/CE-003

We operated for around three and a half hours. With two stations set up on the summit we knew that there would be some in-band interference, but were not prepared for my operations on 18MHz wiping out Paul on 14MHz. Paul was first to get going and I sat listening to him calling CQ. A spot for him soon got things underway and I sat listening for a while before starting my own run lower down the band on CW. With many large signals on the band from across the pond, I had the confidence to run the 857D at just 20 watts output knowing this would help with the battery depletion. As it was, my 16.4AH 3S LiPO + single NiMH combination was still providing 12.5V when I packed up. BTW, apologies for using my G8 call - the XK combination had several people either straining to copy this correctly or send it back to me correctly! I hope it didn’t blow any minds!

Pete was an amazing 579 signal. 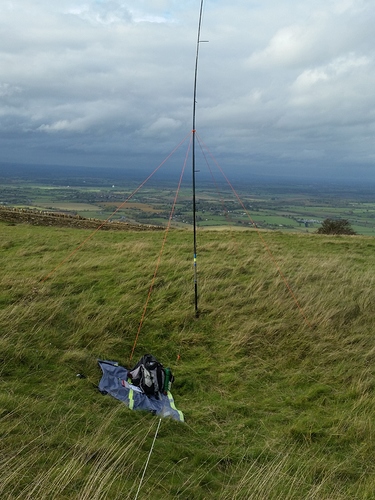 I finished at 16:40z a little earlier than planned so may have missed some potential contacts. Known misses were Pat KI4SVM (who I copied working Paul, but it was Paul’s frequency so I didn’t butt in) and Charlie NJ7V who was handling a run of Stateside callers all of whom were stronger than I was. Both Paul and I looked for Malen VE6VID, but unfortunately we didn’t copy anything.

Many thanks to all who turned out for this event. With the threat of solar activity and it being the low point in the solar cycle, the event went much better than I had expected. I hope a good number will turn out for the next one in the spring. 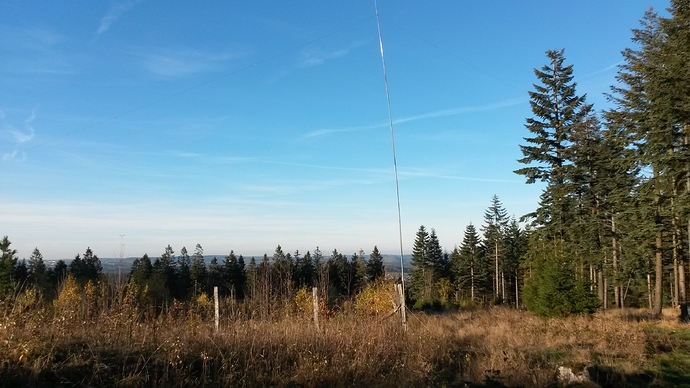 Gerald…I should of known that you were the “G” I worked as an s2s yesterday, but I was too busy in the EU pileup to even think about it at the time.

You were very strong to say the least. Conditions were just plain great yesterday here in AZ!

Oh, yes! We almost forgot to praise our lucky anvil aka the mighty hammer of luck. Good job buddy

Not something to carry on every summit but here it worked well. 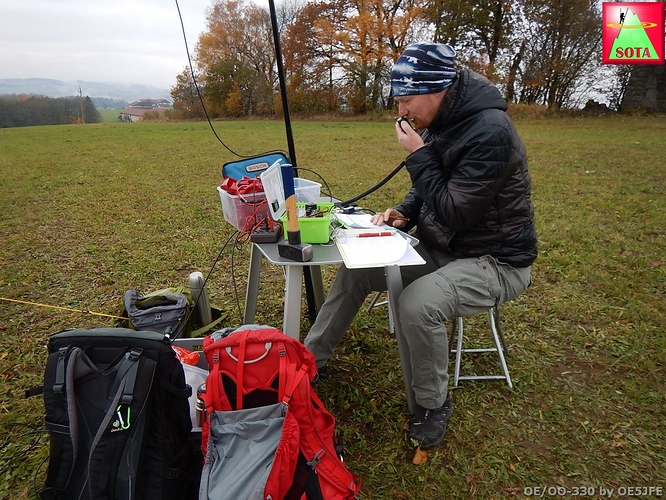 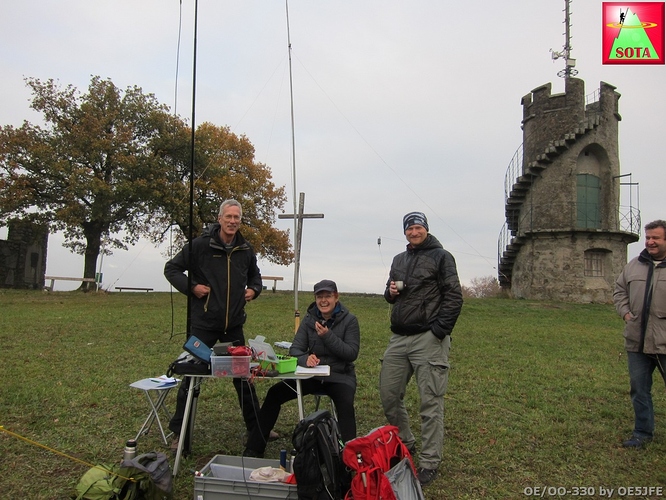 Weather in southern Spain was incredibly warm on Saturday. I spent the morning with the family on Estepona promenade and I was wearing a t-shirt (and I’m a cold person).
So, it wasn’t a surprise to find nice and warm (15 C) weather at 1400m altitude at Pico de Los Reales (EA7/MA-008) in the afternoon.
Plenty of people on the summit, I had to move about 50m from the top to find a decent spot where to install a 14MHz vertical mounted EFHW.
QRP (5W) and SSB didn’t make things easy, although I managed to log 20 operators all EU, 8 of them S2S.
Around 14:50 UTC I realized that the LiPO battery was dead and I had no choice other than taking few pictures and hike back to the car park.

Overall I felt like the trans-atlantic event went well, many EU operators have managed to cross the pond and add some NA stations to their logs. For me it was mainly a test for the newly built antenna and a way to get back to SOTA after some years of inactivity.

Thanks to all the activators for the S2S QSOs and all the chasers who called me. I hope to meet you soon again from another summit!

Some pictures of the day: 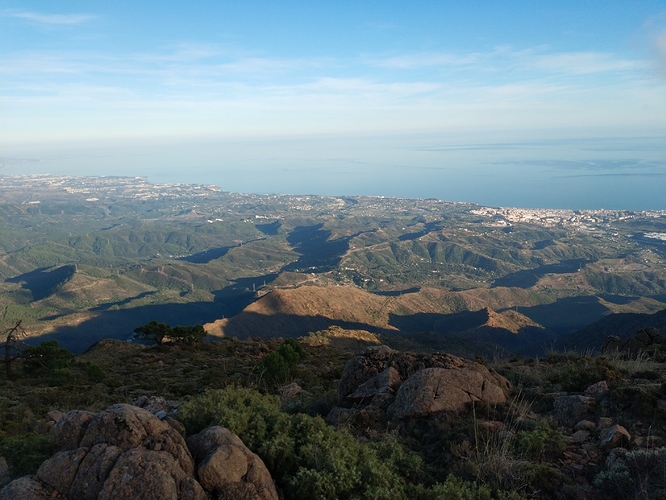 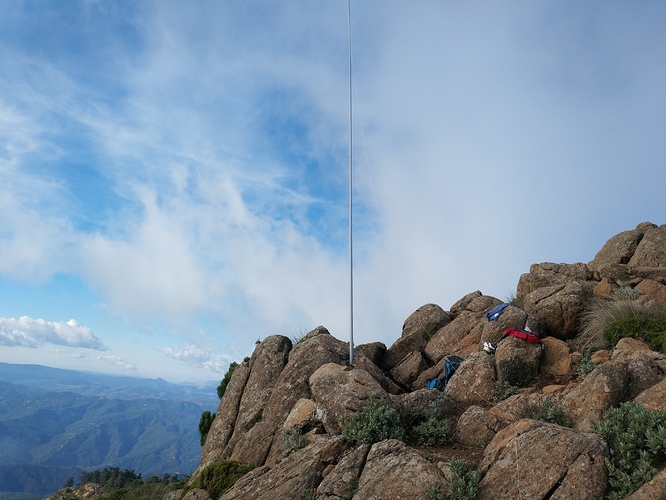 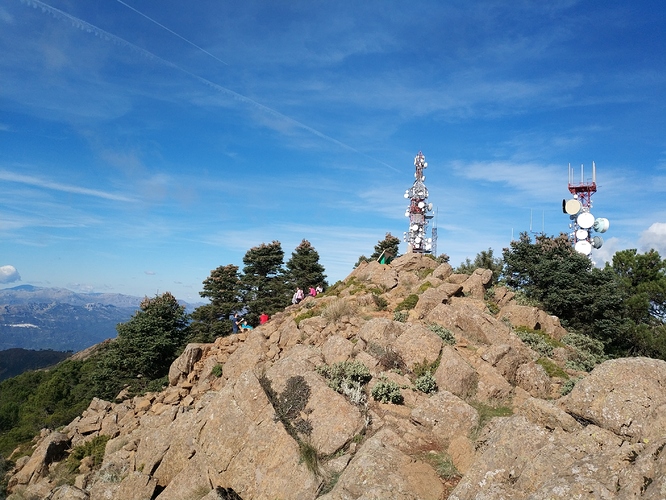 It’s partly a testament to his excellent delta loop antenna, but propagation was certainly pretty decent as well. I was running 12W into an EFHW up about 30ft/9M

I copied you several times while you were working S2S with other activators and your portable station was putting a good easy to copy signal here.
Congrats!
Unfortunately I never found you CQing nor found any spot for you, so I couldn’t chase you. Shame…

With 5 W (KX2) and a balanced-feeding-line into a “Triple-leg” (all elements 7m), it was possible to work 11 DX-Stations from the States and Canada and 1 S2S-QSO with Barry, N1EU!
Many QSO´s from Europe, inclusice S2S, are also in the log.

Many thanks for the organization and to all Hams´s for the nice QSO´s! Such a S2S-event is always a great challenge for alle participants, I´m looking forward to the next!

Don´t wonder about the VHF-antenna in the picture: additionally, i took part for a short time in the VHF-Marconi-Memorial-Contest (IARU-Region 1) until sunset, looking for some new squares and DX, because I´m also a (qrp) VHF/UHF-enthusiast.
In the hope to step aside the wild boar, i hiked down with the last shafts of sunlight.
Ham-Radio from the mountains ist always a great experience! A most excellent event, I had enormous fun! Many thanks to Gerald, Barry and Ed for making it happen.

I was running about 4.5W to an “upper and outer” for 20m which seemed to work quite well. Just for interest I tried the “outer” leg extended to the SE and the NW to see if it made any difference - hard to be sure due to the vagaries of QSB and propagation but I got the distinct impression of better readability when it was extended NW towards the States…

The QRM issue with Gerald on the same summit was totally unexpected - we have operated the same radios (857/817) many times in very close proximity without problems though on reflection I had always been on 7MHz or lower. This needs more investigation… Apologies to those that were calling and that I missed due to not being able to hear them. And to Gerald, who was also experiencing QRM from me

Oh…
I failed to give information
about propagation and used frequencies.
QSO´s were done on 14 MHz, only two qso´s to Greece were made on 18 MHz, namely with you Mike (SV2HSZ) and one with SZ2T.
I called for a longer time cq in cw on 18 MHz and RBN said, that the band was open
(W1NT with 17 dB, W3UA with 19 dB, WZ7I-2 with 13 dB and VE2WV with 23 dB)…
but nobody answered.
Generally, there was a lot of QSB.
I was also surprised about the unexpected conditions!

It looks like those Solar Coronal hole winds hit today as the Solar wind speed is now up to 463.5km/sec and K is at 3. So we were lucky!

qsl SV2HSZ and SZ2T tha same Operator as Chaser and also as Activator for CW mode only.

I called for a longer time cq in cw on 18 MHz …but nobody answered.

Sorry to hear that Gerhard. The band was definitely open and there were stations to be worked on CW. Maybe location had a part to play. I was QRV on 18MHz between 1420z and 1515z and worked a total of 14 stations (10 American fixed, 3 EU fixed (one being on SSB - Kostas SV1ONW being copied at S4 running 1 watt to a GP ant) and 1 EU S2S with LZ1WF/P.

It’s good to see that the RF conditions seemed to be more than acceptable for the stage of the solar cycle. Shame the WX stopped a few from taking part. Not quite perfect but not bad for those looking forward to participating. Sadly for me I had a prior radio engagement or I’d have been braving something as well.

I’ve been looking at the solar conditions today and they’re a bit grim with K=4 A=16 for high latitudes as the predicted geomagnetic storms hit. Raw RBN spots are down to the point you can actually read the display as it scrolls rather than the usual blur and the DXcluster is ‘quiet’.

The question to answer is whether the good conditions were, as Ed had questioned, anything to do with the impending solar storm or if they were just typical of the arrival of November in the Northern Hemisphere.

PLEASE REPLY TO THE DISCUSSION ON THE TIMING OF FUTURE EVENTS ON THE OTHER THREAD SET UP BY ANDY…
and keep the reports rolling in here.