At the end of September I headed off for a week on the continent. The main point of the trip was to attend a convention in Wernigerode over the weekend, but I decided to break the journey a bit by adding a couple of summits to the trip.

The first, which I activated on the last day of September, was Torenberg (PA/PA-004) near Apeldoorn in the Netherlands. I found a small car park on the 100 metre contour, and set up my KX3 and inverted-V dipole in a convenient patch of woodland just far enough from the road for noise not to be a problem, while remaining outside the fence enclosing the protected wildlife area. I ended up only using 40 metres, and switching from SSB to CW when the SSB section became too crowded, but I got 36 contacts (16 SSB, 20 CW, with DL, F, G, GM, HB, OE, OK, ON, and PA) including a couple of summit-to-summits, which didn’t seem too bad a total.

The following day I rode the narrow gauge steam train from Wernigerode to the top of the Brocken (DM/SA-001), the highest peak in the Harz Mountains. 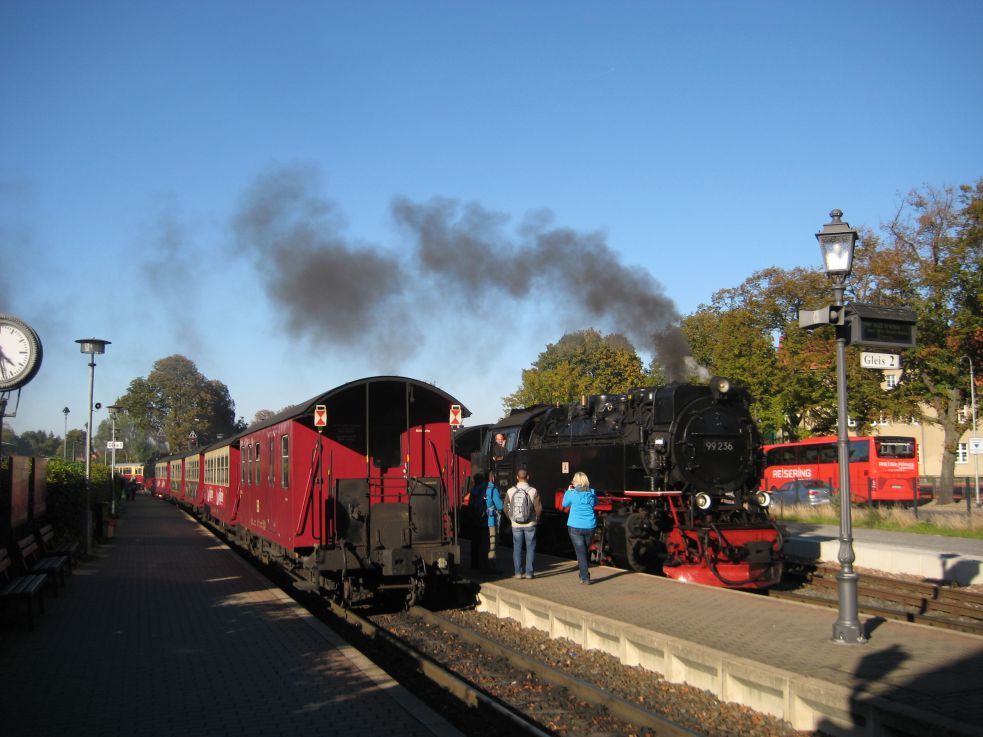 The train has quite a way to climb, so there was lots of puffing from the engine. A lot of the run is through forest, mostly deciduous forest down low, and then pine forest higher up. Near the summit the pines get quite stunted. 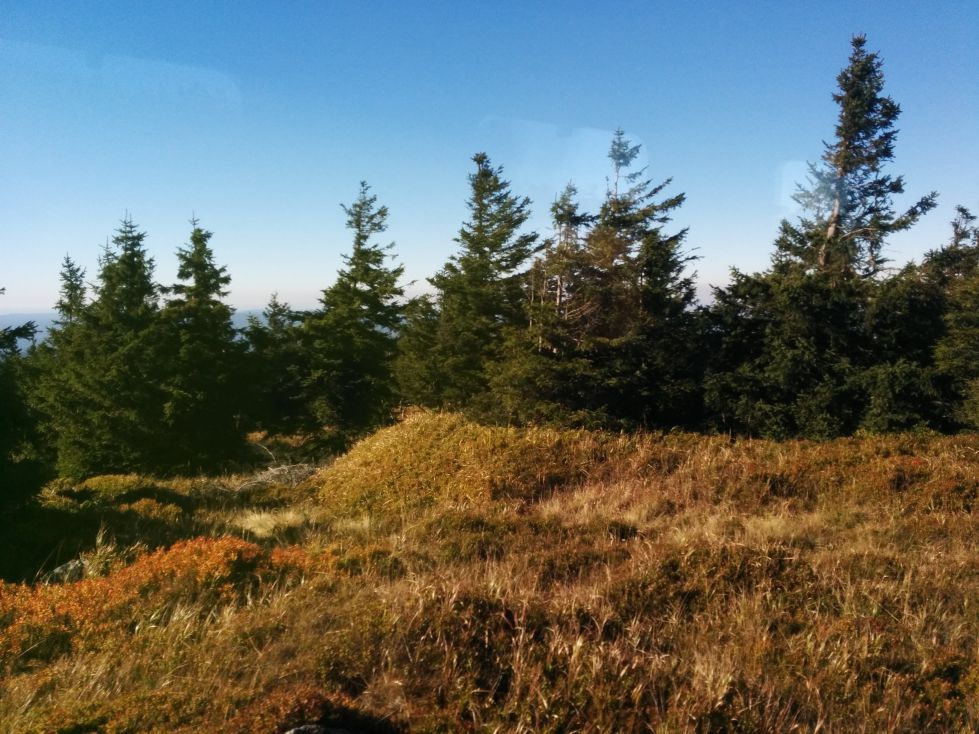 The summit itself is mostly grass, but there’s quite a bit of heather just below it. The weather was fantastic, so the views were impressive, and you can see exactly why the old East German government had a look-out and listening post there. 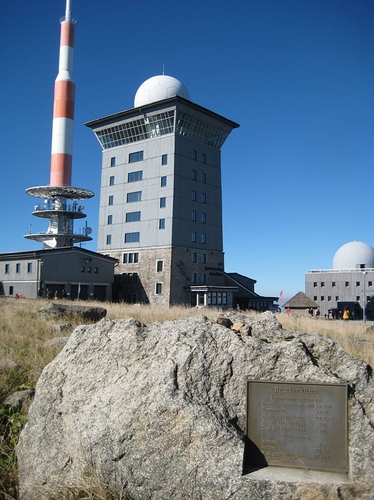 It’s now a hotel, I gather. I spent a while walking around the paths on the summit, and going down a little way in a couple of places just to look at the view. 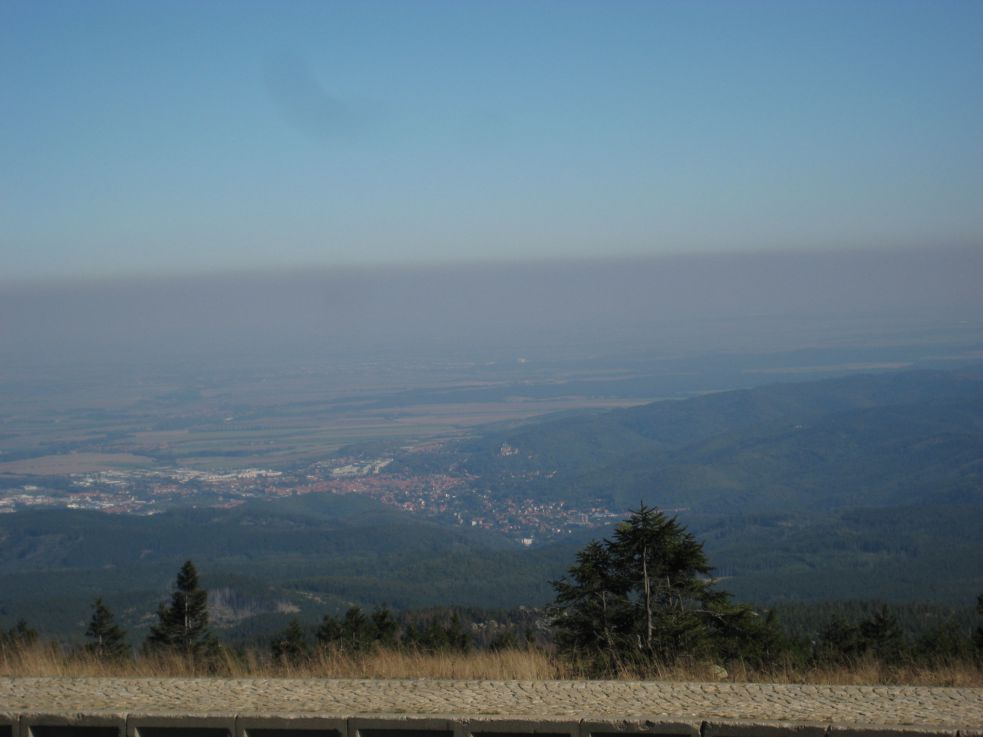 The summit is also part of a national park so you’re restricted to marked paths. I calibrated the barometric altimeter on my GPS at the summit rock, and found that the station platform was 20 metres lower than the summit. Past the station the descent was quite steep, and a place I’d thought would be good for my inverted-V dipole turned out to be over 30 metres below the summit, so I couldn’t use it. I couldn’t find a good place for my inverted-V dipole above the station, but I did find a spot I could sit and set up my MP1B “Superstick” vertical instead. It’s a compromise antenna, but I did manage to make thirteen contacts using it, eleven on 30 metres (with F, G, HB, OM,S5, and SP) and two on 20 metres (with LY and YO), all of them using CW. 20 metres seemed suspiciously quiet, so I may not have managed to get the antenna tuned that well. I also tried calling with my 2 metre FM handheld (using a six metre pole to hold aloft a slim-jim I’d borrowed from Colin G8TMV) but couldn’t raise any contacts. The HF ones, however, were enough for me to score the summit, so I finally pulled my average score per summit above one point.

The train ride down involved a change part way, and a lot less puffing from the engines all the way, but just before I jumped on the train I took a moment to find quite possibly the busiest geocache I’ve ever found. Last time I checked it had been found over 5800 times. 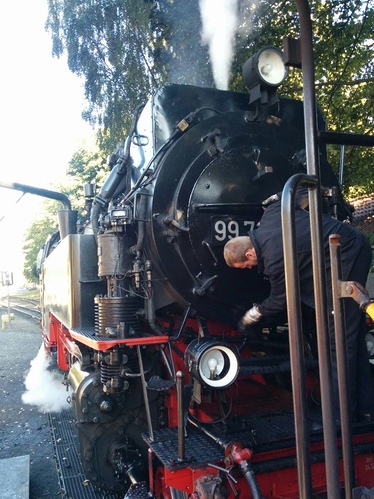 Thanks to all the chasers, particularly the ones who had to deal with my sometimes rather clumsy keying.

I clean forgot to photograph my operating set-up

I clean forgot to photograph my operating set-up

I usually manage to photograph my set up, but always wonder whether it is worth it. Who wants to see my kit yet again? In contrast, your photos of the train and the scenery provided considerable interest, as indeed did your write up. An excellent report Rick - thanks for posting it.

I usually manage to photograph my set up, but always wonder whether it is worth it. Who wants to see my kit yet again?

I also forget capturing my set up sometimes, but let me tell you that I usually like seeing activators set-up pictures because, even if it’s pretty much the same set up and the same operator, the scenery is always different.
Best 73 de Guru

I like to take photos of my set-up for my own future reference. A photo of my set-up on the Brocken would have probably have included trains as well as the general scenery. I did take a photo of my set-up at Torenberg, but all you can see in it are trees, fallen leaves, and a small bit of kit. I guess, if the antenna was made with day-glow wire it might have shown up…

your comment about the ideal location for your antenna being 30m below the summit top made me look at the rules again.

This suggests that the antenna, battery, even the radio could be partly or wholly outside the AZ so long as the operator is inside. Any cartoonists here? I can visualise a Mr Bean character leaning over the 25m line, operating the radio legally from a position inside the line.

Disclaimer: I’ve been struck down by a virus so my mind is wandering.

Heh! I’d have needed quite a long bit of feeder, and a way to get it across a service road and a footpath!.

Given the vertical accuracy of the GPS even with barometric calibration, I figured I wanted to be at least 5 metres (indicated) above the activation limit, just to be sure, and the ground on the Brocken does drop off quite rapidly once you get away from the summit.

Torenberg, on the other hand, has a fairly large activation area. I was over a mile from the actual summit and still within a closed contour only 7 metres vertically below it.

How about a crows nest type seat on the top of the 10m mast and operate from there? Within the 25m vertical AZ and NO, but I mean really NO loss down the coax!!

P.S. In case someone doesn’t realise it - this was “tongue in cheek” - DO NOT TRY THIS YOURSELVES!

… but not quite within the enclosing 25 metre contour!

Well if the wind blew in the correct direction … Now this is getting Silly!