To start the new year off with Tryfan, GW/NW-006

Quick report from yesterday’s activation on the SOTA summit of ‘Tryfan’ GW/NW-006: Early start for me leaving home at 5am with a friend to reach the car park for Tryfan at approximately 7.15am. The wx was dry with a low wind in the air when we arrived. Put our clothing gear on and made for our ascent. Reached half way up Tryfan to find a massive change in the wx which was not forecasted, very heavy wind with strong hail showers. We had a clothing stop, waterproofs were at the ready and off to go again. Reached the top of Tryfan and found a rock to try and shelter under - there’s not much help up there!!

I set my slim-g up on the 3m tele pole due to heavy wind and put a call out on S20 using the very wet FT-65 as my friend stayed sheltered under the rocks. Managed 7 itl, and put a final call out. As you are aware, I alerted Tryfan…Glyder Fawr…Y Garn & Elidir Fawr for today, but I made the decision not to carry on to Glyder Fawr as the wx was to bad and getting worse! Many thanks to Allan ‘GW4VPX’ for informing the GW SOTA FB group - I had no signal myself. If you see my images, not even the true Mountain Goats could hack the wx today on top

We then did some more boulder hoping for a few hundred yards and made for our descent safely to the car. Drove to Moel Siabod cafe and had a big breakfast

was also nice to see Aled MW0UPH and Richie MW7RJO who joined us shortly after. I’d like to say a big thank you to all chasers that called me today - much appreciated

please see some images I’d like to share with you below. Until next time, Happy New Year and 73, take care. GW4BML/P. Ben 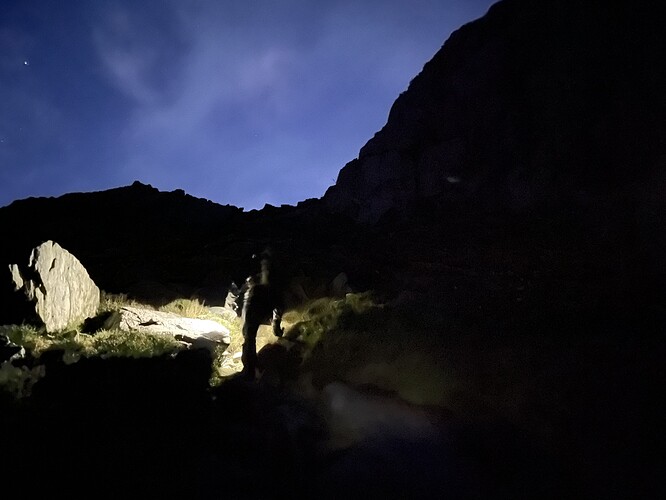 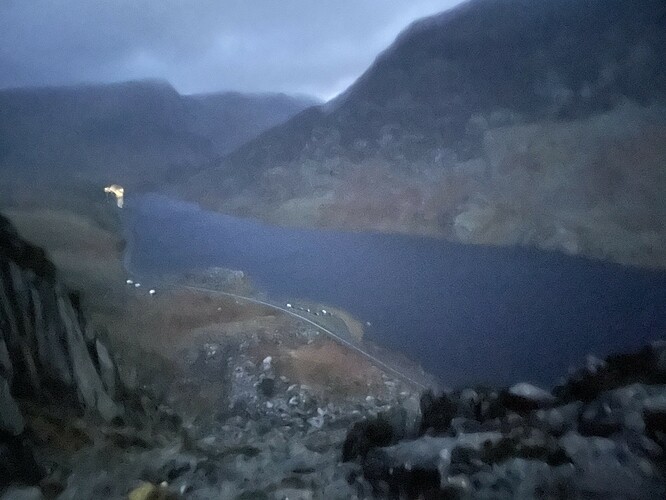 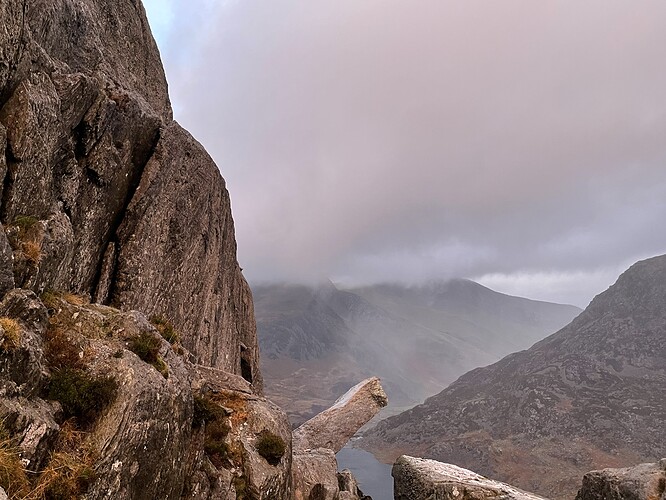 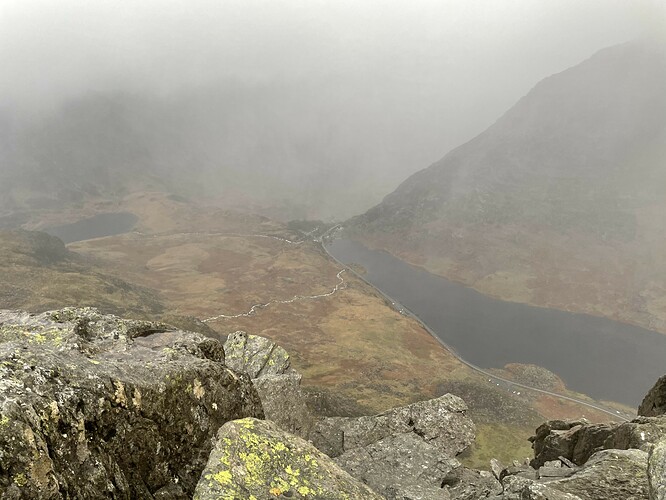 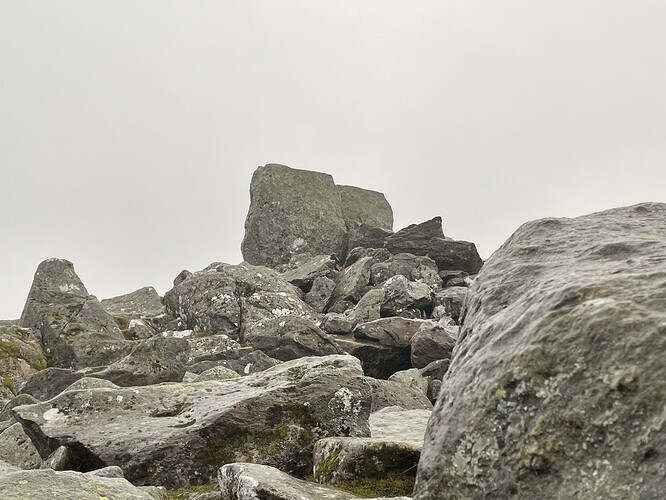 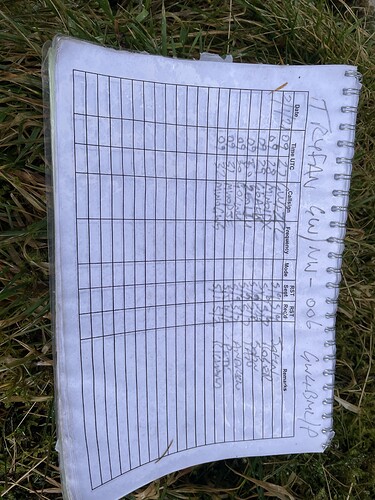 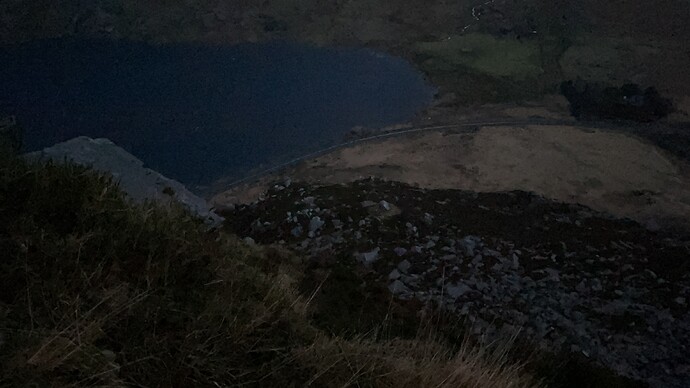 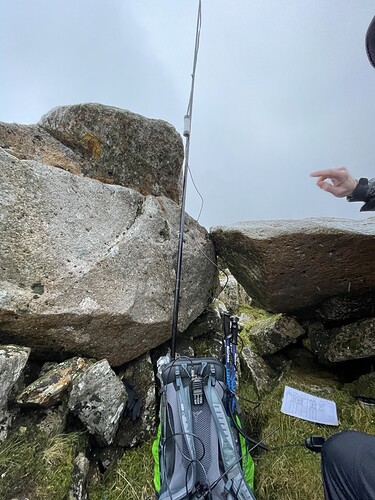 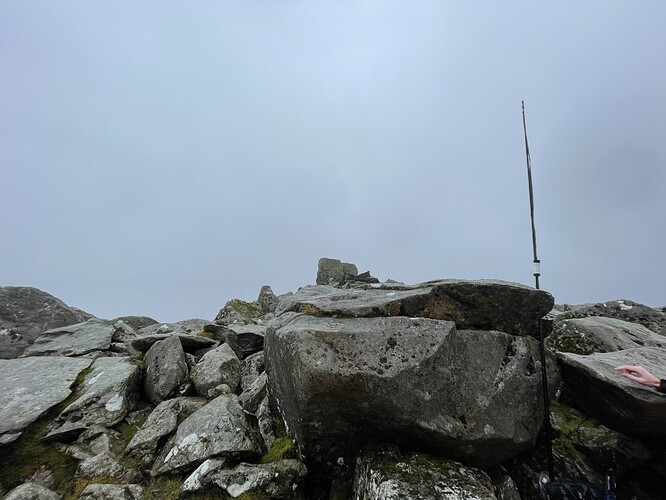 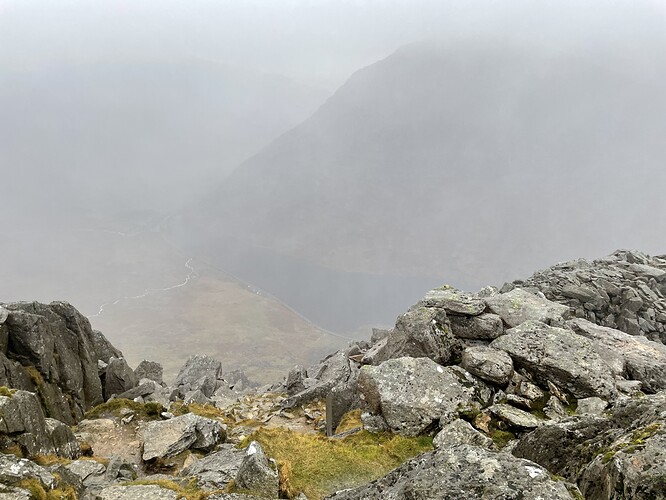 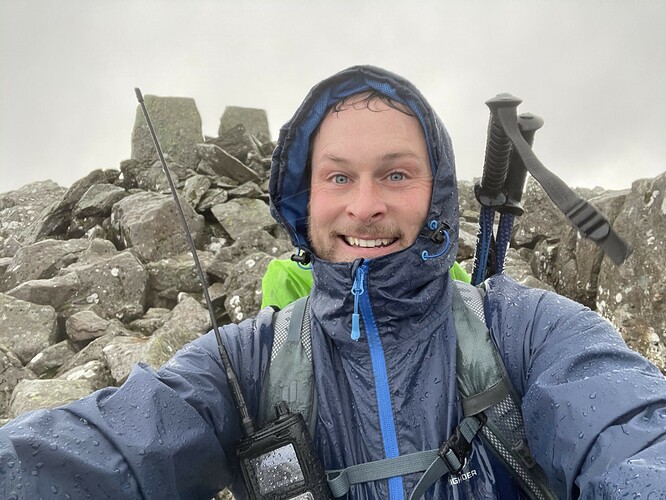 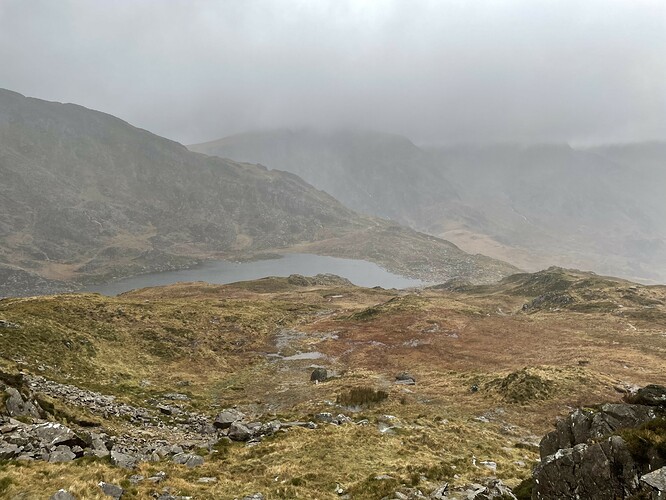 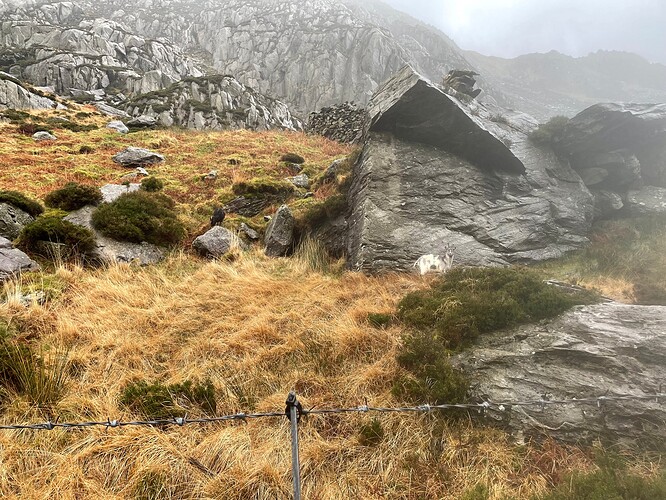 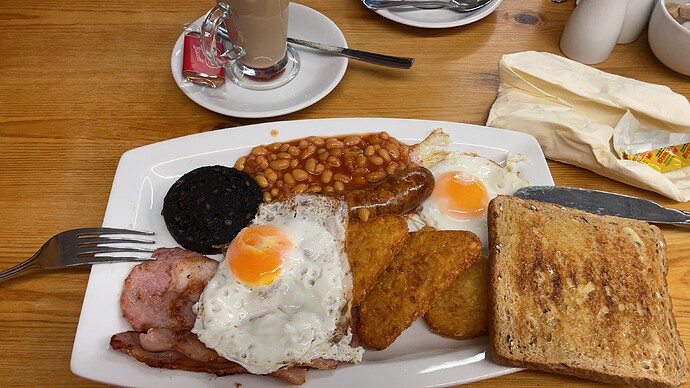 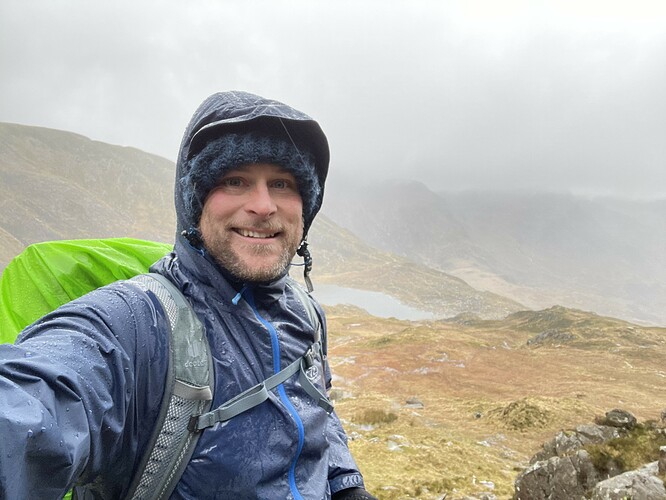 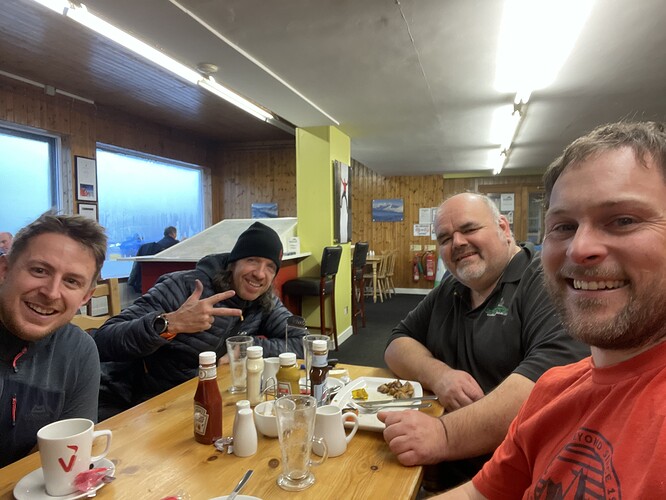 Good call yesterday Ben. Thanks for the great photos and report and looking forward to chasing you on your next challenge which I think is on the weekend. Hope the weather holds for that one.

Thanks for your kind words Allan. Yes, I’ll be back out this coming Saturday to hopefully finish off my above adventure

look forward to maybe working you on my activations. 73, GW4BML. Ben

Nice one Ben looks like you made the right decision.

Hopefully be back up there this coming Saturday to finish off Martin. Was good to get you itl today. 73, Ben

Thanks for the enjoyable report and photos. Looks like the breakfast was well-earned!

Jimmy @M0HGY and I originally alerted for that group of four too on our first attempt. We did Tryfan GW/NW-006 first, and then went onto Glyder Fawr GW/NW-003. At the col between that and Y Garn GW/NW-004, we reluctantly made the call that the time was too late and we were progressing too slowly. So we descended down Devil’s Kitchen and went to relax and recuperate in the youth hostel.

We returned to the area on a later trip and did the other pair of Elidir Fawr GW/NW-005 and Y Garn GW/NW-004. It does look very appealing to activate all four once you’re up there, but we found each pair to be more than enough for a day’s walking!

Good to get you ITL that day, even if it wasn’t a S2S. Yes the weather was appalling and the same over where I was activating on Moel Siabod, but at least I had a cairn to shelter in!

Cafe was welcome relief afterwards and thanks for the brew.
73 till next time

Thanks for the comments

the breakfast certainly tasted better than what the wx was like!

The aim was to do the same route I did last year, and add Elidir Fawr into the equation, we were doing well for timing hitting the top of Tryfan GW/NW-006 at 09:00 UTC. We sheltered under a couple of rocks munching on our sarnies hoping the wx would clear, but it seemed to get worse! And as you’ll know, there is no cover what so ever once you hit the Glyders, it’s just all open hill walking. So, we took the breakfast choice and boy did it taste good!! Hahaa. Will be back this Saturday to conclude my adventure, may catch you if your about. Look forward to your and @M0HGY next activation.

Your very welcome for the brew! I know I have 2 free ones next time we’re both in NW land

Haha anytime just let me know when you’re back in NW land!

Looks like you had a proper day out in the mountains!

Tryfan is such an amazing mountain, but not when the weather turns (as it often does up there!). I’m glad to hear you got down safely!

Best day I’ve had on Tryfan was on a glorious day in January one year. It was warm enough that lots of people went up it in just t-shirts and shorts.

Great pics Ben. Pity about the weather.
Nice to catch you today on Rhialgwm. I heard you on Gyrn Moelfre too - lovely big signal, but the wind sounded horrible! Hope you didn’t get swept away.

I must admit, I do like climbing Tryfan, there’s something about it! I’d of loved to carry on to the Glyders, but the hail and wind put a stop to it. Fingers crossed I can resume and finish the other 3 off this Saturday. Have a listen if your about, be good to get you in the log. I’m not sure will I be in my shorts though, lol. Take care and 73. GW4BML. Ben

Thanks James, was great to get you itl from Rhialgwm. The wind was roaring on Gyrn Moelfre, but not too bad on Rhialgwm. May catch you over the weekend

Great write up & pictures Ben, well done for getting up there at all in those conditions. Good call on not activating the rest safety must come first & they will always be there for another day mate.

Thanks buddy, the rest will come soon