Yesterday we did the tourist thing and went up Timanfaya (EA8/LA-009). Unfortunately it is a national park so even though we went right past it we were confined to the coach that drives around a circular route. We had some nice food that was cooked over a well that went down some 10 metres to the hot rocks below.

After travelling down the coast geocaching we decided, at the last minute, on an evening activation and headed up to a summit we knew would be easy to access, Montana Roja (EA8/LA-026). Conditions were not good on the bands with 20 metres closing down early and 17 metres having S8 of static but we had some great views out to Fuerteventura. 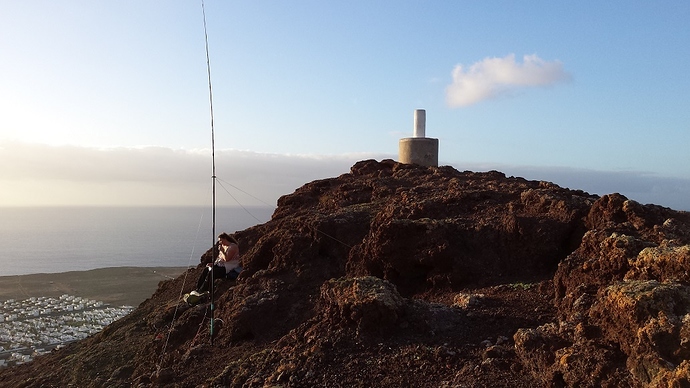 Today we decided to try two summits, one Carolyn had previously chased, the other unactivated. The first was Montana Negra (EA8/LA-010). Think of a big pile of shingle rising 200 metres up with a 500 metre climb to the summit and you have some idea of the difficulty of the climb up. Conversely the loose stones meant it was a easy and fast decent

We spent half an hour each on 20 and 17 metres and it took a while for the pile ups to die down. The weather was overcast but actually it was ideal conditions and made for a very pleasant activation with the various views of calderas surrounding us. 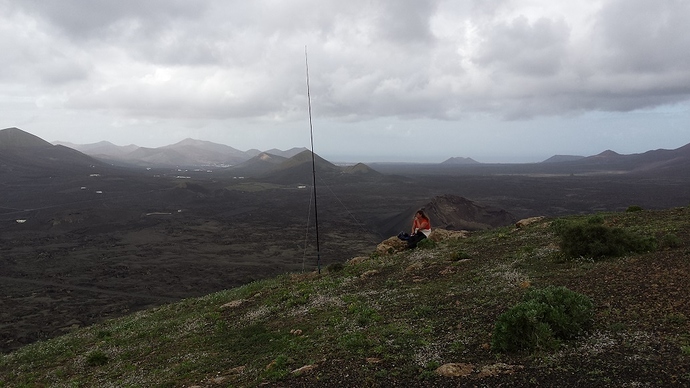 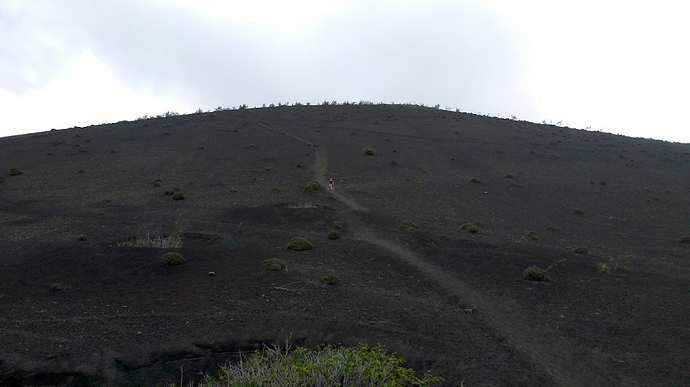 We decided we had time for the second summit Montana Tamia (EA-LA013) which is right in the centre of the island and relatively unwalked by the visiting masses. There was an easy track to follow through a cultivated area and then a worn stretch that continued up the side of the caldera. It was steep but easy enough if not a bit relentless.

Helen was allowed to activate first and after some initial antenna trouble in the wind, she gradually broke down the wall of noise that was presented to her. Carolyn took over so Helen could continue around the caldera rim to a geocache which was annoyingly on the other side. When she returned Carolyn had just finished on 20 metres and continued on 17 metres with 100 contacts in total over an hour and a half between the two of us.

Sorry we had to close down but after 3 hours of activating over the two summits the batteries were sagging badly; we are now gently coaxing them back to full charge. 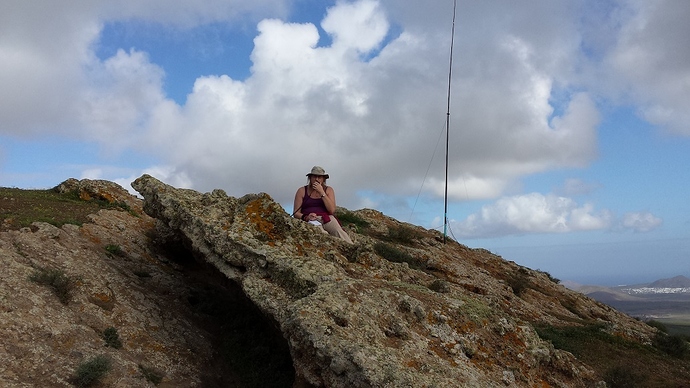 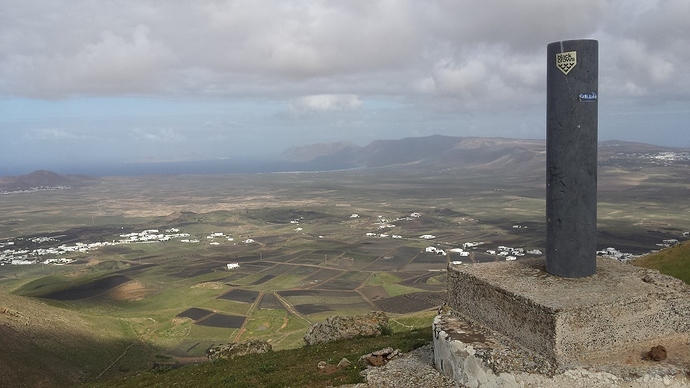 The view from the trigpoint over the caldera; it does not do the drop justice! It was hazy but in the distance the golfball on Penas del Chache (EA8/LA-001) can be seen and beyond the bay the island of La Graciosa

Many a chaser will be awaiting your;lovely voices on air.

And behalf of us all, jolly well done and a BIG thank you for your time and effort gone into these summits. And the latest report and brilliant pictures and I thought Helen did rather well. But don’t let her loose on an inactivated virgin summit every body goes for it as you may have heard. One of the biggest Sota pile up’s I have ever heard…

Look forwards to the next one

It is only fair that Helen gets her name on some of the newly activated summits as she has climbed all the hills with me. Usually she is content with a handful of contacts and then wanders off to take some photos or look for geocaches while I carry on. I am a bit more forceful than Helen with piles-up as I have had to deal with more unruly mobs

It looks a bit warmer there than on at least one activation you did in the states! Sorry I haven’t worked you yet but I have been, & continue to be, extremely busy.

Thanks for the Top band S2S in March just before I changed position at work, most frustratingly, just as I was finally getting somewhere with Morse!

Hope to catch either of you on the air at some point whilst you are still out there.

Karl, both Carolyn & Helen are very experienced activators & they both know how to handle SSB pile-ups

I have even heard Helen using CW!