Motivation:
I’ve been involved in SOTA for some years, having done most activations with my first portable rig, a trusty Yaesu FT-817.

Two years ago I got an Elecraft KX3, a pretty nice TRX that is nowadays my main station at home. It is been in some SOTA summits as well, mainly past summer, but I felt the rig was too good to face the wear of many future activation and adversity of the winter time…
Although I own an LNR MTR-3b which is so nice and fun for a only CW activation, I missed a SSB + CW rig, to replace my FT-817. I wanted something lighter, rugged enough, with a bigger screen and easier to operate with regular size buttons…

Then I found the LNR LD-5. After some e-mails with LNR, I could order one from a new batch of this model. 5 bands (40-30-20-17-15m) is enough to have plenty of opportunities for SOTA, I thought!
I exchanged mails with Ryan from LNR, who provided an excellent support to get one of this rigs delivered here in Europe, which is unlike to happen normally.

The point is that my friend Jorge EA2LU wanted also to replace his FT-817 and after some thinking his choice was the brilliant Elecraft KX-2.

Some days ago we received our brand new models at home, and we decided to take them to a SOTA to give them their release!
Let’s see how it all went.

Mt. Erga driving directions:
There are two popular options to climb this mountain: one starts at Irurzun, but we choose the second, starting at the village of Aizkorbe.

We agree that I would pick Jorge at 7:30 utc from home.
Nevertheless, late past night I had seen the alert of Manuel FK/HB9DQM, announcing another activation from New Caledonia FK.
I thought we could not work him today, but at 6:14, while having my breakfast I saw the spot announcing him on 30m. I jumped to the shack and a bit later I heard several central european stations working him. I couldn’t hear him yet but knew that waiting for some minutes the grey line would approach us in west Europe. As expected I heard a bit later Manuel, putting faint signals in my Dipole. It was difficult to work him on 30m and I guessed he would QSY to 20m a bit later. I sent a message to Jorge and warned him that with a bit of luck we could work him.

With all ready to go and my boots on, we waited and at 7:35 I could work Manuel after Jorge, on 20m beaming Long path. This was the first surprise of the day!
Then I grabbed the rucksack and went off home.

After a nice drive chatting about our common chase of the day with FK/HB9DQM/P, we started the climb at 8:10 in Aizkorbe. The morning was clear and a bit cold with a temp of 6 C.

Mid the way up we stopped to see the nice autumn colours. In front of us we could see 3 SOTA summits, (from far to close, Mortxe NV-073, Gaztelu NV-099 and Sarobe NV-150, as you see in the picture: 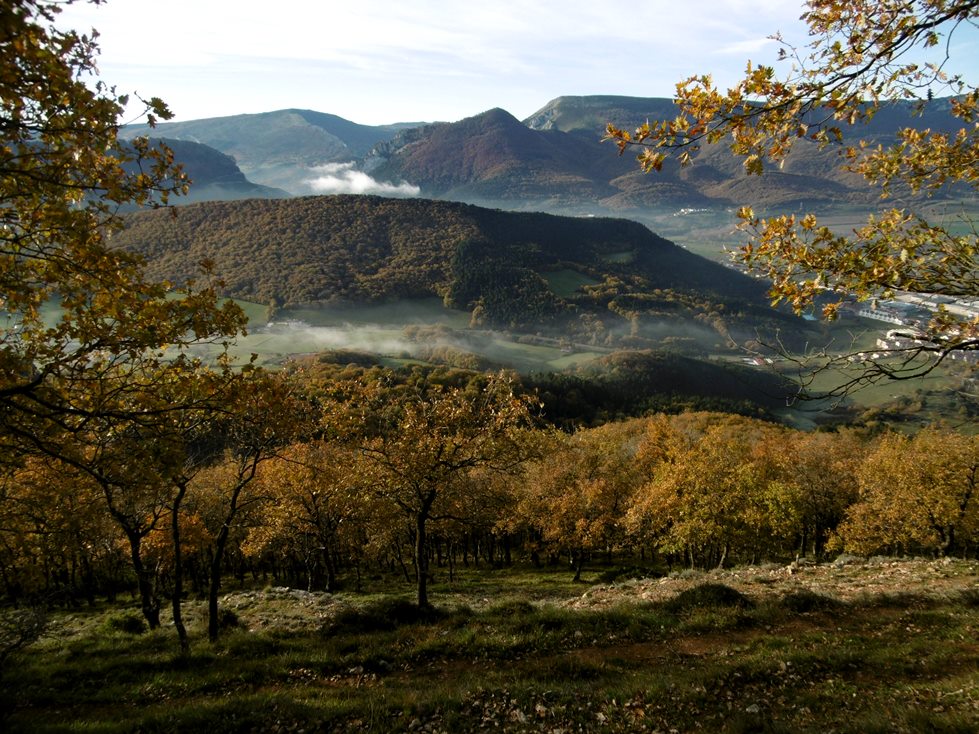 At 9:10 we reached the summit with its trig point. It was very windy but the views today were fantastic, with all the Pyrenees range in snow at sight: 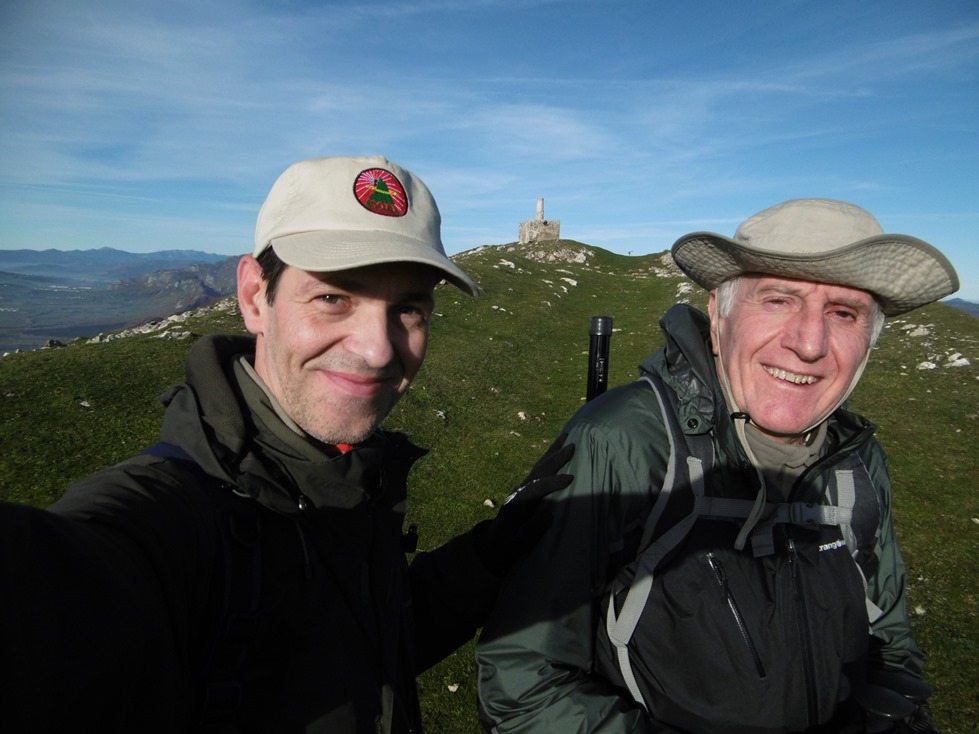 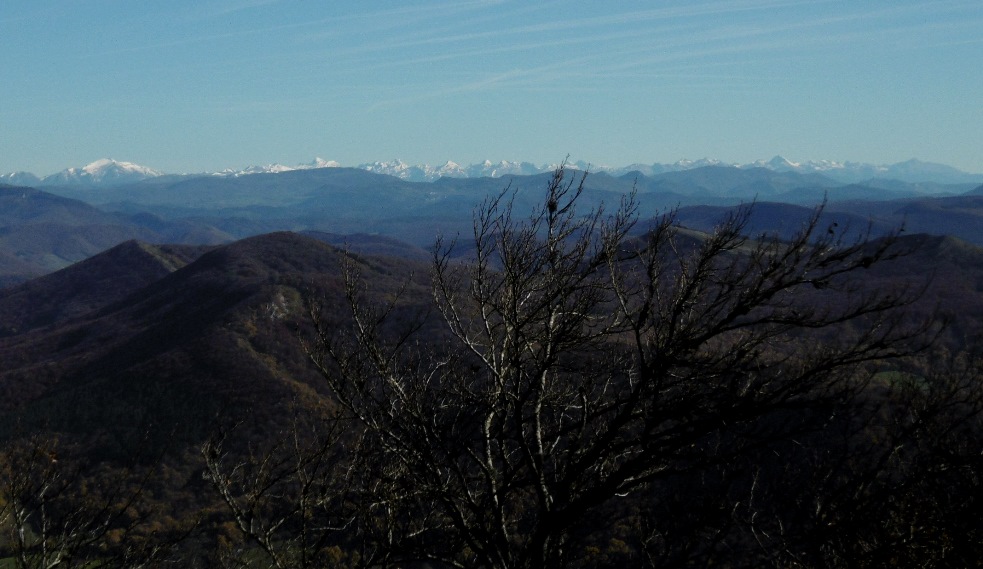 Fighting against the wind we tied EA2LU’s pole to the trig point and extended his End Fed. The pole collapsed and had to start over again. When all was fine he connected the rig and tried SWR. Suddenly the wind pulled from the aerial and one stone used to hold the feed point jumped down, hit Jorge’s head, and went towards the KX2!! Luckily Jorge grabbed the stone on the air and we breathed with relief.

We fixed the wire again with more stones and then Jorge started activating on 40m. Notice the stones at the base of the wire extended inverted vee: 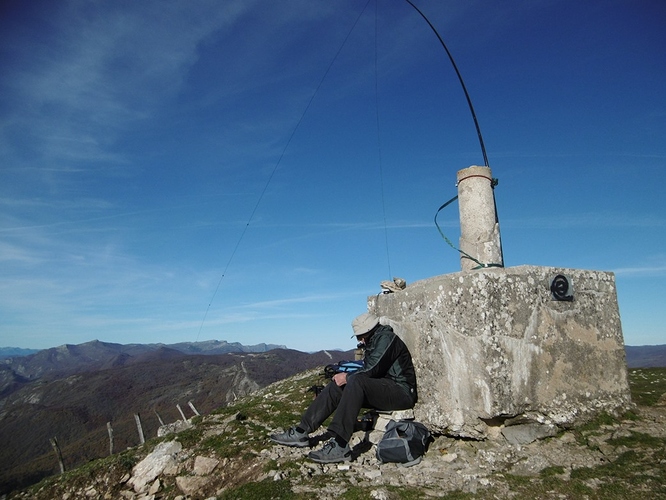 The rig and battery plus the inline auto voltage reducer: 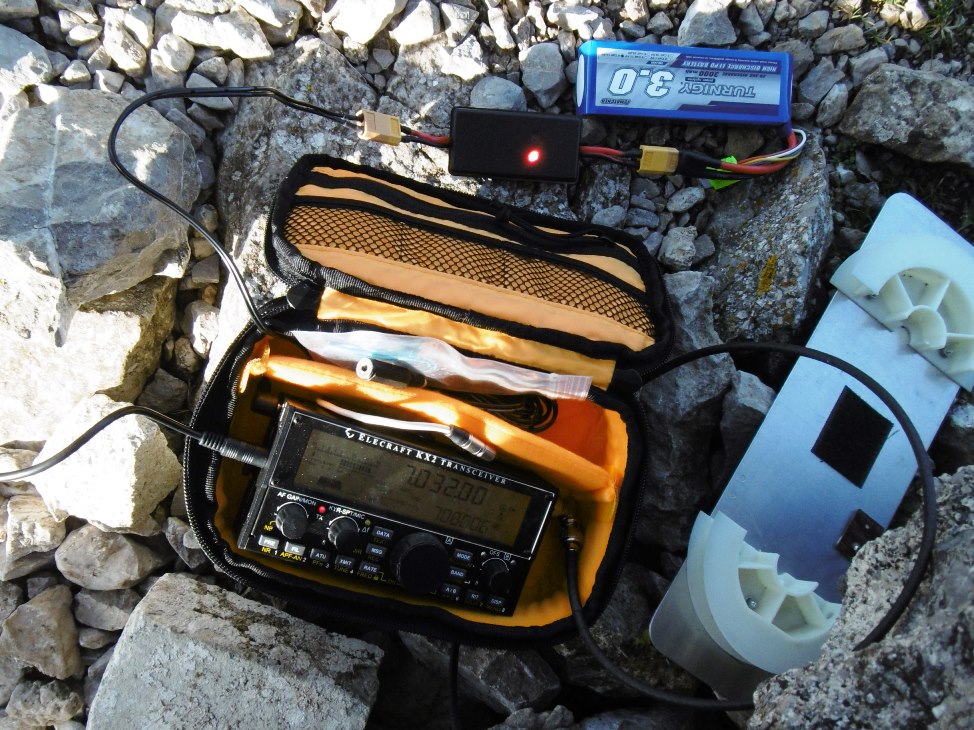 Once I heard him with the Pile up in progress I moved to separate well our antennas on the summit to allow simultaneous operation.
I didn’t have any trig point and therefore installed my aerial inverted Vee with the aid of a third fixing point as of a triangular configuration, as you see here: 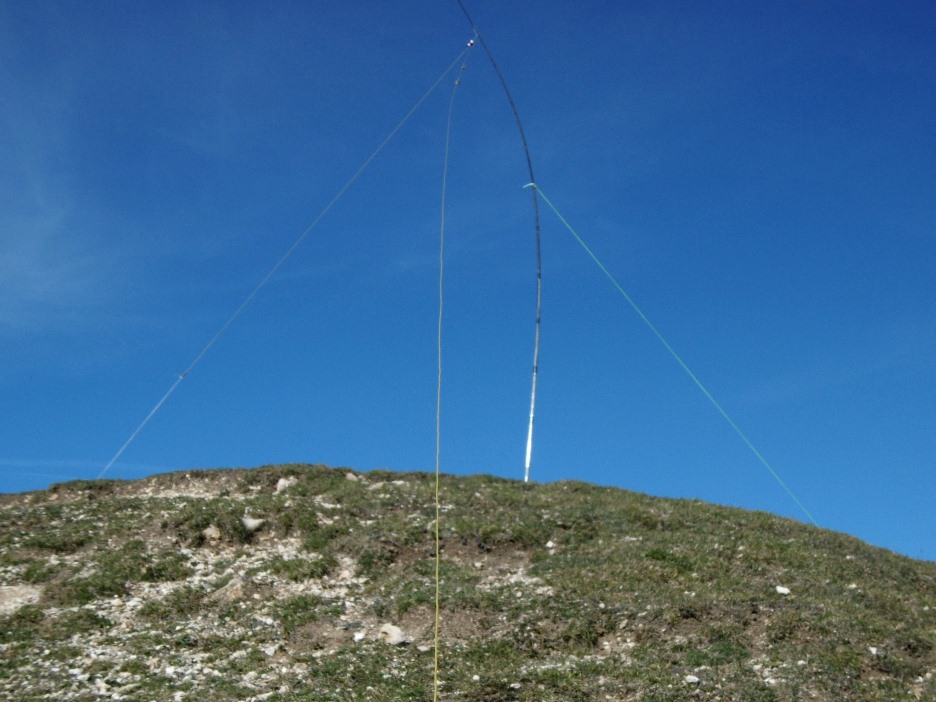 I connected everything, plugged my cheap PC headset to the mic and phone ports and tried to start my activation on SSB, nevertheless the TRX started to do a flicker tx without speaking. Strange! That was the second surprise of the day. I checked everything but couldn’t solve it. At home I had tested the rig with another headset and it worked fine. I unplugged then the mic connector and the trouble stopped. Tried to reduce the Vox gain but nothing happened. That was the second surprise of the day!

Then I decided I would solve it at home and moved to CW. By the time Jorge had worked on 7, 10 and 14 MHz CW. I started cqing on 18 MHz CW and soon logged 5 qso that saved my activation.

I used a brand new iambic touch keyer I build last week (as the title sais, the third brand new toy of the day, apart from the KX2 & LD-5). It is a nice small paddle that worked really well. I put the PCB inside a custom made box and painted it orange. It uses a little CR2032 3 volts lithium cell.

Here you see my station ready to work and the small iambic at left. 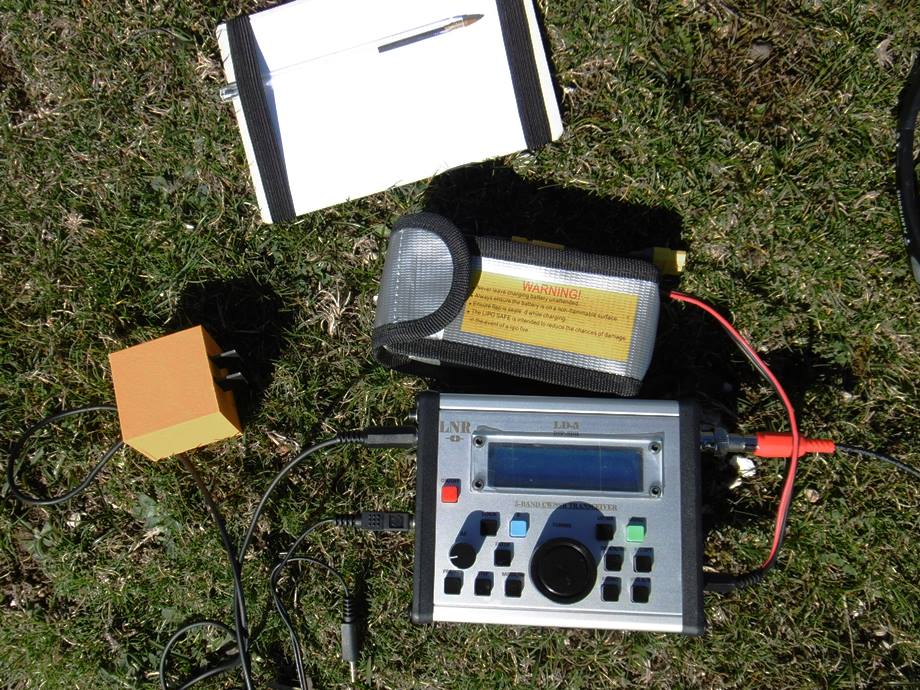 LD-5:
After the activation I just scanned the bands for a while and I can tell the reception is fine, with very low floor noise.
The built in CW filter works great. It sounded well on receive.
The rig weights 580 grams. Power out with a 3S Lipo can be set between 3 to 8 watts.
The SWR built in meter is also a good point to check that my EFHW antenna works fine.
RX current drain is 340 mA. The current drain on TX out at 5w is 1,7 amps.

Well, what a pity I couldn’t work on SSB I had planned… Sorry about that. With a mix of feelings between the good and bad news we went QRT and packed.
Jorge was very happy with the extensive trial of his KX2 and 64 qso in his bag. I was… well, I will need another activation to test mine.

Post analysis:
Back home in the afternoon I tried modifying parameters on the LD-5 but couldn’t make my portable heaset work. They work fine when connected to my KX3; so unfortunatelly it seems that LD-5 requires other characteristics for headsets. I still need to find another headset that matches the rig.
I have the original stock microphone they sent me, but that is big and bulky and I prefer to have my hands free and work with vox on and a headset. I will let you know any progress.

Is there any of you here using LD-5 with a headset with more success? I feel it’s gonna be a fine rig for SOTA but need to find a proper headset. Any comments are welcome…

Very nice report form your activation. Bad luck with your headset, but I am sure you will solve the problem.
Stone on head of Jorge ist acceptable (hi), but stone on KX2 is totally unacceptable, I am glad Jorge could manage the situation and avoid a desaster.
To both of you: have fun with your new rigs and I hope to hear you soon with your LD-5 and KX2.

With all ready to go and my boots on, we waited and at 7:35 I could work Manuel after Jorge, on 20m beaming Long path.

Thanks for the QSOs Ignacio and Jorge, you have now both chased me twice!

Looks like you had an ufb activation with your new toys after all, and with very nice weather

Thanks Peter! next time we’ll put the stones on the floor to be safe!

Thanks Manuel! We both are glad to count FK now in our hunted countries! You saved my day from total disaster…

Appendix: some info about the iambic touch key (which worked perfect!)

Here you see inside the orange box (nice color to avoid leaving the key forgotten in the summit when packing), the full PCB populated with easy thru hole components (a few): 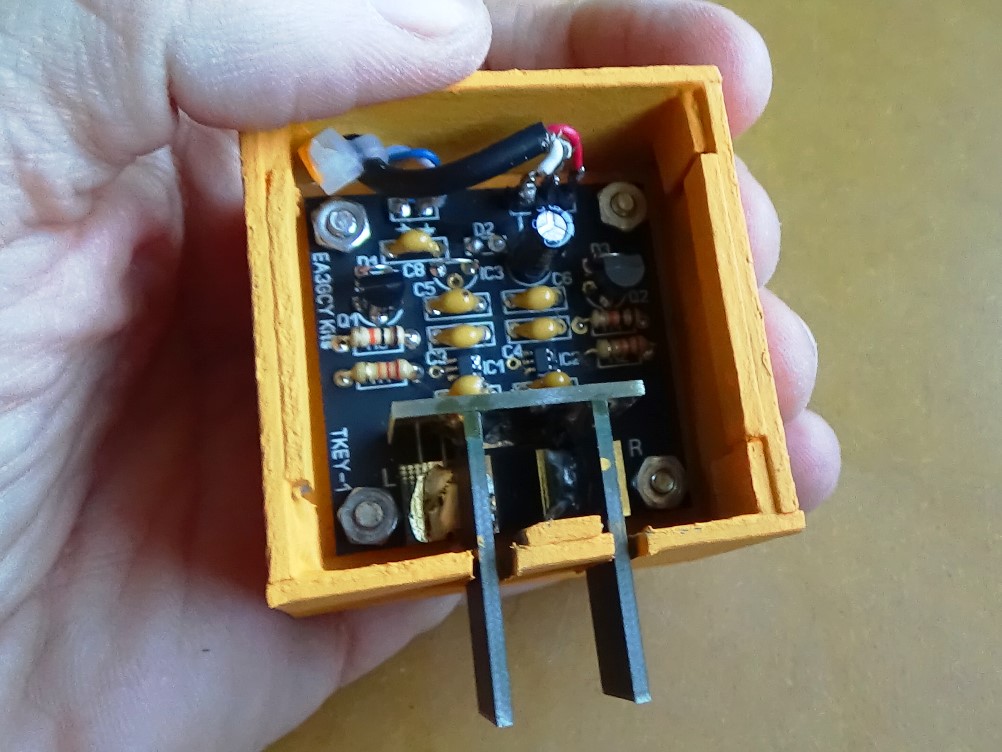 Underneath I left an open space for the lithium cell holder: 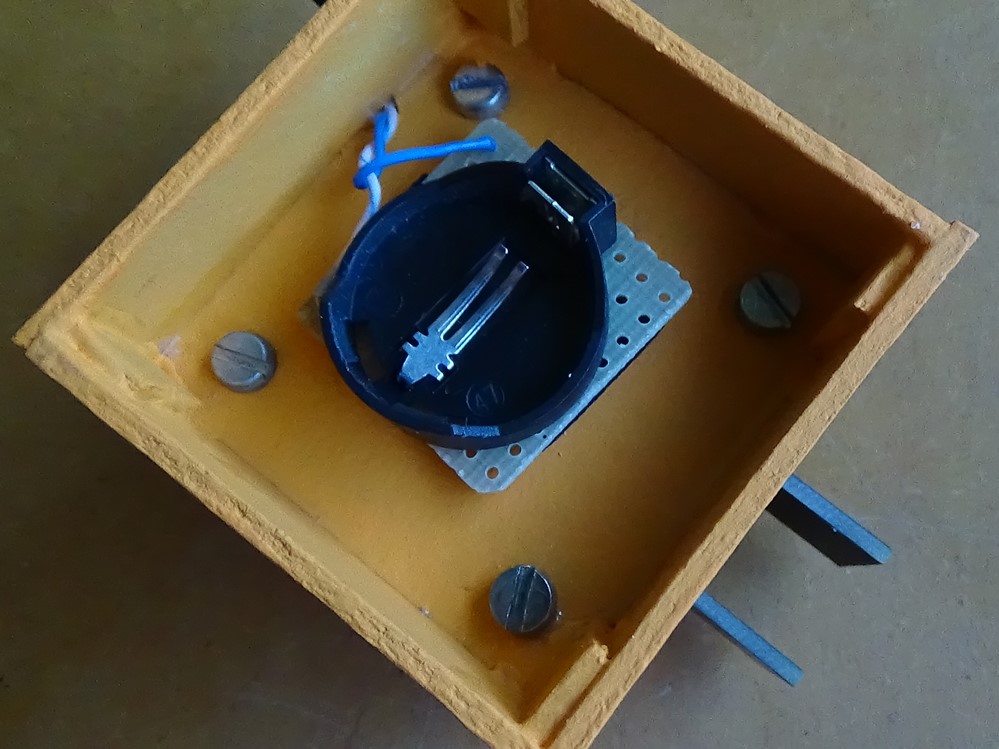 The box was homebrewed from a thick cardboard A4 sheet (1,5mm thick).It is light and robust enough. The Acrilyc paint ensures protection against light rain.

Hi Ignacio,
fantastic exhibition. I had fun reading.
Greetings to Jorge, I hope you enjoy that KX2!
73 & DX.

Mr. Ignacio a sorrow that does not work the LNR LD-5 with these earphones, insurance that you it can solve well.
How the new telegraphic tactile key?, I bought and mounted 1 unit EA3GCY, but not used.

Hello Dani, thanks a lot, Jorge is enjoying his new rig a lot. And he saves weight in his rucksack, hi! 73

Hello Juankar,
It does worth you assemble and test it.
The key works fantastic. Very sensitive, fast response with little finger contact. Works perfect so far.
I don’t know if I will use it in humid days with gloves… More info in the future.
73 de Ignacio

Mr. Ignacio thank you very much.
I will test the telegraphic key. The Kits of EA3GCY are very good.