The State of Beer in Britain & Europe

before the Winter Bonus Period. Roll on 1st December!

there was real ale in Scotland forty years ago, but not everywhere

You’re not getting it, the point or the beer!

It’s not that you can’t find decent beers although I don’t particularly like most British beers. I like my beer blonde like my women! I really don’t like the brown stuff that is drunk. I’ll agree that the purity laws in Germany may result in many of their beers being similar but that’s just fine. I happen to like my beer that way. And that’s the point, in Germany, I don’t have to seek it out. Anywhere and everywhere you can get really excellent beers. Bars, cafes, vending machines, currywurst van on the street. Ask for a beer in Germany and you get something that is just great without effort. Without looking to see if it’s a CAMRA pub or whatever. You can also get the cloudy stuff which always makes me think of the pregnant camel joke!

That guaranteed “beer will be excellent” fact is what is missing in the UK. Beer might be excellent in some places but you’ll have to fanny about finding it.

Clachaig Hotel and they served either Younger’s Tartan or McEwens Extra,

… and their blond is better than the IPA

As for the “traditional” Scottish beer, the less said the better and the newer varieties are close to totally undrinkable, even my dog won’t touch them!

But the world is full of “suicide blonds!”

Its a long time ago, now, but I remember finding some really tasty “brun” biers in Bavaria, it may be nice to have tasty blond bier (and tasty blond women) but they do say that “variety is the spice of life”! Your guarantee that the “beer will be excellent” only works because you like the style. Personally I found the style insipid, although it pays not to disrespect it - after a few of those lovely litre steins (a German feature that I would love to see spread in this country) I found it hit me like a sock full of wet sand!

Now that is something that I look forward to doing a little quality assurance on!

but I remember finding some really tasty “brun” biers in Bavaria,

It’s called a “Dunkles” Barry - directly translated - a Dark Beer! And that can just be a Dunkles Lager or a Dunkles Weissbier.

As Andy says, because of the “Reinheitsgebot” (purity law) all beers in Germany are brewed to a particular standard, that doesn’t mean however that a wheat bier (Weissbier (White Beer) in Bavaria, Weizenbier (What Beer) elsewhere in the German speaking lands) from one brewery must taste the same from another bewery.

Confusing isn’t it, but one beer you can’t get in Germany (unless imported) is the British Bitter beer, best drunk not chilled.

Jimmy M0HGY
ps - Me and my dad Tom M1EYP are off to our local brewery on Saturday to taste some nice British real which is a birthday celebration for my 2nd cousin turning 18 on Thursday.

I have to disagree with what is being said about beer being better abroad than in the UK.

Yes Jimmy, I agree to your disagree also. Its an age thing

But the world is full of “suicide blonds!”

The age thing does actually surprise me a bit be the honest Jonathan as I always thought that younger people preferred even the poor quality lager and older people either preferred real ale or the poor quality keg bitter. I think we are part of the few young people that like a real ale.

Quite! Reminds me of a Giles cartoon just as Britain was joining the EEC (remember that?) - guy saying to his mate how do you order 2 pints of beer warm as **** in French? As the fearsome looking barmaid (dragon) looked on disapprovingly. Who wants to drink ice cold beer in our climate? RHETORICAL QUESTION!

I don’t know what it’s like now, but good quality real ale was a rare beast indeed when we holidayed in GM some years ago. I suspect that is your problem Andy.

Here in the North West of England we are spoilt rotten with a huge and growing number of quality, successful microbreweries, producing a massive variety of superb real ales. Every part of the various spectra (colour, taste, texture, body etc) are covered, so there is something for everyone’s taste.

I don’t ever find myself yearning for German lager, put it that way.

I don’t ever find myself yearning for German lager, put it that way.

Indeed, lager in the north of England is only consumed out of shear desperation. Many very good ales exist, especially in the multitude of pubs in Manchester which I have spent many an hour in. No blondes sadly, but plenty of fat old men complaining about their pensions and recent political topics rather frequently.

Well the Germans have a similar climate to the UK and all the beer I’ve tried in D land was chilled. The Dutch were responsible for spreading beer making across Australasia.

However when we had an influx of German migrants they headed for the Barossa Valley and started wine making. Their descendants and hundreds of copy cats are now making an array of first class wines.

A good cold beer can put the polish on a successful activation. (Included to give post slight relevance).

I find that beer is of the moment, you have to be in the right mood to enjoy it to the full.

The pint that I enjoyed the most was served to me at a small local cricket club during a match. Me and a friend had spent the day doing grouse beating and after 6 drives (we usually did 5), we were pretty much totally spent. It was decided that a pint of beer would be a great end to the day, and we happened to pass the cricket club, so regardless having having no interest in cricket whatsoever, we were quickly united with a couple of glasses of amber liquid. Boy, was that amber liquid good! I can’t remember what beer it was.

The most recent ‘best’ pint of beer was from the Star Inn at the edge of Dartmoor. I was drinking the local ‘Jail Ale’ in the beer garden in August with my XYL’s father. (My XYL was drinking some weird yellow looking stuff 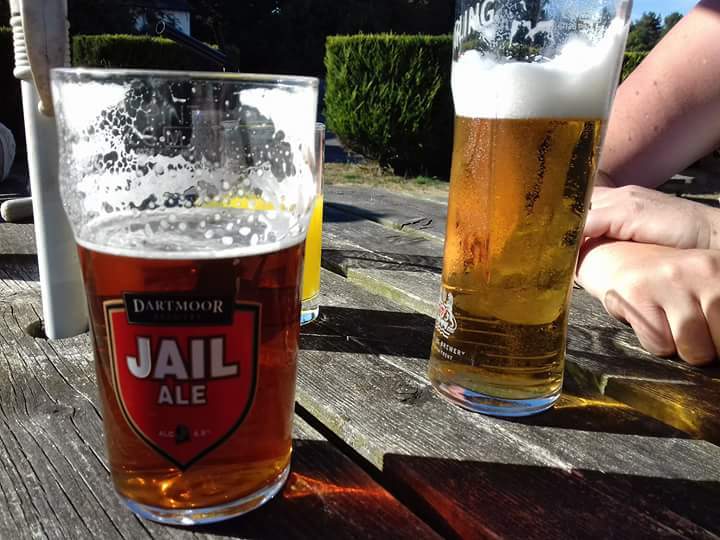 Believe it or not, historically there were Beer warmers that were put into beers (Dunkles I would think) in Bavaria! So the idea of all English beers being warm and all German ones cold is not 100% correct! There are some beers that one can’t drink ice cold (Bitter for example) and thse that taste horrible when warm (Hefe Weissbier for example). As for the Imported Lagers in the UK, check the chemical content - most (not all) have chemicals in them that should not be allowed in a good beer.

It would appear from this thread there is sufficient interest in establishing a new awards program Beer Brewers on the Air.

Someone else can figure out the points system.

(My XYL was drinking some weird yellow looking stuff

Arghhh, has she recovered yet?

Someone else can figure out the points system.

Should that be pints system?

I think we are part of the few young people that like a real ale.

That is down to education Jimmy. Your dad has done a good job introducing you to traditionally brewed ales. You were born at the right time. Had you been born in the 60’s then you would probably have been faced with having to purchase keg beers, introduced purely because publicans had lost the knack of keeping decent cellars. The trend for keg beers lasted for the best part of 20 years. In my opinion, the Watneys Red Barrel joke should have been applied to all. I must admit that in desperation I resorted to purchasing lagers which I soon found I was allergic to as many were chemical brews. Wine was becoming popular, but some of that was equally carcinogenic as we seemed to be expert at importing the dross from abroad. Guinness and cider became the only half palatable alcoholic drink to be found and some of that was not well kept. Now the situation has changed completely. I rarely have to search for a good pint. Even up in Scotland some decent ale has been found… admittedly, a lot of it brewed south of the border. What price independence now?

a lot of it brewed south of the border. What price indepdence now?

Guinness man myself. Just want to be reassured that there will be no changes to our supply channels & relationship with Eire following BRexit