Summits over the Atlantic 2010

As the Autumn Equinox approaches, with its normally enhanced radio conditions, it may be a good time to think about an event to stimulate summit-to-summit contacts across the “pond” (NA-Eu). Something on a Saturday, perhaps 1600-2000z?

Any interest in holding a SotA 2010 event?

I remember talking to Bernard DL4CW at Friedrichshafen this summer and he told me how our May International SOTA Weekend is a little too early in the year for quite a lot of the Alps and something later in the year would be good. Perhaps we could have an Autumn(*) International SOTA weekend with all the usual fun and games but also with a slightly greater emphasis on HF and crossing the pond.

There’s 4 weekends in September and 2 at the start of October where, at least in the UK, the weather is normally decent. So I’m up for a play.

25th is the CQ WW RTTY - would need to avoid that.
2nd October is possible, that clashes with the Eu Sprint (also 1600-2000, for obvious reasons) - though there are no “contest free” weekends.

Any interest in holding a SotA 2010 event?

Definitely! Like Andy wrote the May event is highly depending on the imponderables of nature and a later activity in the year would give a bit more of planning reliability. Now I must belie my own writing, since this years wx seems to be very unreliable: 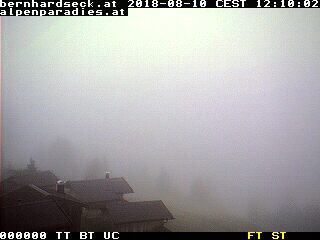 (Image taken at 1700m). The higher regions received up to 50cm of snow last night, so it’s about time to wax the ski. I think the snow will settle well (or disappear again) at regions up to 2000m and summits of that range should be easily accessible until mid of October. I’d go for it!

Edit: Any objections against holding three SOTA Weekends (Spring, Summer, Fall), maybe even include Winter as #4?

That seems good to me, Bernhard.

Sept 25 would be quite convenient to me as that weekend I hope to be on a climbing club meet in a hut right under GW/NW-016!

Why not make it a regular equinox event with an activity period over three weekends to include the weekends before and after the equinox, to make it a little less dependant on radio and weather conditions? As the sunset time is rapidly getting earlier at that time of year, perhaps we shouldn’t go too far into October.

though there are no “contest free” weekends.

There are some contest free bands though!

Sept 25 is a less desirable weekend for me. Not impossible just more awkward.

how about the weekend 2nd/3rd of October then?

I think we should wait for some views from across the Pond!

Well, theres the second NA SOTA day that is scheduled for november 13th and 14th but this doesnt mean we cannot setup something else before.

The promo video for the NA SOTA is here: http://www.youtube.com/watch?v=xzmXhD6MiMU

25th September is not good for Macclesfield’s SOTA participants, most of whom will be out celebrating with M3EYP as he gets the beers in for the first time!

A good idea though, and I agree with Richard, let’s see what the US and Canadian associations have to say first.

Come up with a date and if it works I would be happy to activate a Canadian summit for you.

(Although I need to cancel my VE1 alerts next week, hurricaine Edgar is blowing through the maritimes this weekend - not a good time for SOTA.

I must admit that I had forgotten about the second NA SOTA day. Perhaps we should stick with that to avoid “diluting” the response?

Mid November is as late for the German alps as beginning of may is early - see Bernhard’s earlier remarks here.

We have snow at 2000m upwards from end of September.

The 13-14 November event is what the W6 group activation has planned for. That certainly does not exclude another event. The events are valuable in drawing attention to SOTA activity.

November is late in the season for alpine travel in most of W6, but the lower summits and the desert see relief from the harsh summer heat.

As a very rare activator of what are really some relatively easy G/SP summits, I would be happy to participate in a trans-Atlantic activity day.

However, with some associations that have some of the highest summits already moving into Winter conditions, I would suggest a date nearer to the present, rather than leaving things until it could be too late for this year.

Good radio conditions for this sort of event already seem to be here, so I think weather conditions on the higher summits are the deciding factor. With that in mind, may I suggest a weekend between the middle & end of September?

The 18th-19th September or 25th-26th September would seem to me like something to aim for. Anything later than that & I think some of the higher summits may well be dangerous, or even innaccesable.

My own choice would be over the weekend of the 18th-19th September, & throwing my hat into the ring with those dates,does anybody have any better suggestions?

We are already into the first weekend of September, this would give anyone hoping to be active at least a full week to plan & prepare, which for a high summit in near winter conditions is no bad thing.

Sooner rather than later would therefore be my suggestion.

The original idea of NA SOTA day was to give opportunities to Eu chasers to work NA summits, but did not empasize on Across Atlantic S2S contacts.

It is in this spirit that the NA SOTA assoc set up nov 13th and 14th.

I must admit that I had forgotten about the second NA SOTA day.
Perhaps we should stick with that to avoid “diluting” the
response?

Looking at the responses it seems that it may be better to run only with the currently planned NA SOTA event this fall and look towards a transatlantic s2s event on another occasion. There is plenty of time after all.