Next week (Oct 17-20), the IARU High Speed Telegraphy World Championship will be held in Beatenberg, Switzerland. Teams from at least 16 countries, from as far away as Mongolia and Japan, will be participating.

From Tuesday through Saturday, we will be running a special event station HB9HST. On one of those days, though, I will “borrow” the callsign and will be organizing a “SOTA day” on nearby HB/BE-138, the exact date of which will depend on the weather. I will be operating under the special callsign HB9HST/P. I also expect many of our guests will come along. IARU Region 1 President Hans, PB2T, has already indicated interest, so listen for him. As for others, if they can operate under the CEPT agreement, they might also operate under their own callsigns. We will focus on 40/30/20 meters depending on the preferences of our guests. I also can’t make any promises about how fast or slow they will be sending their CW; it should prove interesting. I know the keyer speed limits on my ATS-4 rig will likely throttle many of them.

Please listen for us and give our guests a nice pileup! Details to follow when I know more (and have a reliable wx forecast). Or if you happen to be in the neighborhood, stop by for a visit – it’s a lovely part of the country, overlooking Lake Thun and our Eiger/MÃ¶nch/Jungfrau peaks in the Bernese Highlands.

Many tnx for your fb work Paul.
Hope to meet you there between some dits and dots

I still got some problems with my leg, so I try
to work from the “basic-camp” HB9HST sometimes.

Btw hr is the webcam on Niederhorn, hopefully
thereÂ´s not to much snow next week. 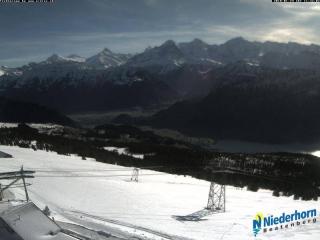 lots of snow today on the swiss mountains.


Hope for better weather around friday.

Very nice idea! I will be active (SOTA) on Wednesday, 17th October 2012, on the opposite side of the Justistal on the Sigriswiler-Rothorn, 2051 meter asl, reference HB/BE-139. I’m hiking up to the Sigriswiler-Rothorn from Eriz-SÃ¤ge and have planned to be activ about 11:15 UTC (13:15 HBT) on 14.062 MHz in CW. If the weather is clear with high visibility, we should/could see us! I’m listening on the Niesen Relais (HB9F) during my hike up to the peak.

Hi Lorenz
You won’t see us on Wednesday – participants are still arriving, and we’re waiting for more snow to melt near the summit. We’re thinking about Thursday for an activation. And then perhaps another (Niesen?) on Friday with some visitors.
73,Paul HB9DST

I’m a bit confused about HB9HST that has been spotted several times today.
Although I worked Rolf he was neither SOTA or HST

Not only that but as I was working him on 10Mhz he was also spotted on 7Mhz!
I’m not sure what is happening…
Pete

Op Rolf has been using the call HB9HST since 0800z, giving his QTH as Thunthun with no reference to SOTA.

However the Auto-spot system is spotting every new freq as HB/BE-138 so it must be picking up on an Alert.

Sometimes spotted as HB9HST/p sometimes without the /p

There’s an alert for BE-138 and if the call is spotted by RBNgate software within +/- 2hrs of the alert then it will be spotted.

There’s also a spot for HB9/PB2T so maybe, just maybe there there are several people all using HB9BST at the same time, some of whom are valid for SOTA and some who aren’t along with others actually using CEPT versions of their own calls.

My personal view, if I didn’t hear the ref being sent at sometime during the operation then I’d not log this as a SOTA contact due to the confusion. But it’s a personal decision in the absense of any confirming evidence.

In reply to MM0FMF:
That is new reason why i do not like that “RBNgate” spotting !

It’s tricky to know what an automatic system could have done differently under the circumstances (which are at least somewhat unusual). Bears thinking about, but probably better discussed in the RBNGate thread (to keep ideas in one place) than here.

In reply to M0LEP:
Just to clarify any possible confusion: all this week, HB9HST does have a special event station operating from the town of Beatenberg (actually two stations, one literally being next to an army tank parked in town square, the other in our guest house lobby, but only one runs at a time).

However, a number of us “checked out” the call HB9HST/P for about two hours for an activation of BE-138. This was done with the full authorization and encouragement of the event organizers. A few of us ran under HB9HST/P, while two people made their very first SOTA activation under their own calls: HB/DK4QT/P and HB/PB2T/P (Hans, President of IARU Region 1).

I don’t think that anyone is asserting that the QSOs might not be considered valid. People were wondering why my RBNGate software automatically spotted both HB9HST and HB9HST/P to Sotawatch several times (the automatic spotting happens when Reverse Beacon Network hears a station calling CQ within X hours before or Y hours after the time in a corresponding SOTAWatch alert, with X=2 and Y=3 at the time of the HB9HST spots).

The explanation for why that happened is over in this rather long thread regarding Automatic SOTA Spotting, down near the bottom:

To save you from having to dig through it, I’ll quote the most relevant parts below. From Rick M0LEP:

The system caused a bit of confusion this morning following this alert:

The alert didn’t include the “/P”, and the 11 RBNGate spots aren’t unreasonable under the circumstances:

The explanation from me. Note that I wasn’t aware of there being two different stations signing HB9HST and HB9HST/P as you explained above, so I was referring to what I believed to be a single station as “he” and “him” rather than “they”:

RBNGate ignores portable designators such as “/P” in both the alert and the spot when doing a callsign comparison between alerts and spots. In all of the cases you listed, the callsign was treated as “HB9HST” for the comparison and for duplicate spot checking, but he was spotted using whatever RBN heard him send with his CQ.

In each of the cases you listed, HB9HST either changed bands or changed frequency by more than 1 kHz, so RBNGate sent the spot in to Sotawatch. I see numerous cases in my software log where an RBN spot of him was rejected and not sent because it would have been a dupe to a spot already in Sotawatch.

In response to an NA activator’s request for the spot window to extend to 3 hours after the alert time rather than 2 hours, I have since modified the software to allow the time window before and after the alert time to be independently configured. It might be better for me to reduce the before-alert-time window from 2 hours to 1 hour (or even shorter), especially if HB9HST was indeed not yet on the summit at 0801z.

As always, opinions and suggestions for improvement are welcomed!

Correction: I forgot that I had actually changed the after-alert-time window to 3 hours in response to the request from an NA activator, so his 1202z and 1206z were within that 3-hour window rather than the 2-hour window I mentioned (the before-alert-time window was still set to the original 2 hours when he was spotted at 0801z).

In the interest or preventing further confusion since your event is still ongoing, I have temporarily added HB9HST to the RBNGate software’s excluded activator list. This will prevent RBNGate from spotting HB9HST, HB9HST/P, F/HB9HST/P or any other form of the HB9HST callsign, even if a corresponding activation alert exists in Sotawatch. I can remove HB9HST from the exclusion list after your event concludes (or leave it in at your preference).

Hopefully this information clears up the mystery.

The only reason is some people were confused by the same call being in different places. This was made worse by my SMS spotter failing and your spot that you were on BE-138 not getting through. That would have helped reduce the confusion when people saw a number of human spots for stations all activating BE-138 and then would have had more confindence in automatic spots.

There are bound to be some problems when something as different as this is first used. It is difficult to get all the right conditions for spotting or not-spotting in place so that we can let the automatic systems make life easier for us. Here we have something taking 2 pieces of information and deciding to make an action based on them. It’s not safety critical but for our fun and entertainment. This may expose to non-programming people just how fiendishly difficult is to work on software that is used in flight or medical safety!

Put all four together and you get, in this case, confusion.

Put all four together and you get, in this case, confusion.

The SMS spots would have helped folk filter out the genuine SOTA RBNgate spots from the mistaken ones.

RBNGate could only have worked correctly for HB9HST/P on HB/BE-138 yesterday if the alert had given an exact callsign (including the “/P” disliked by some) AND RBNGate insisted on an exact match (including “/P” …) between RBN spot and SOTAwatch alert callsigns. Neither was the case, so it was bound to go haywire…