A two hour drive from home took me to the parking area below Hay Bluff, to find Black Mountain dusted in white (this photo actually taken after my descent) 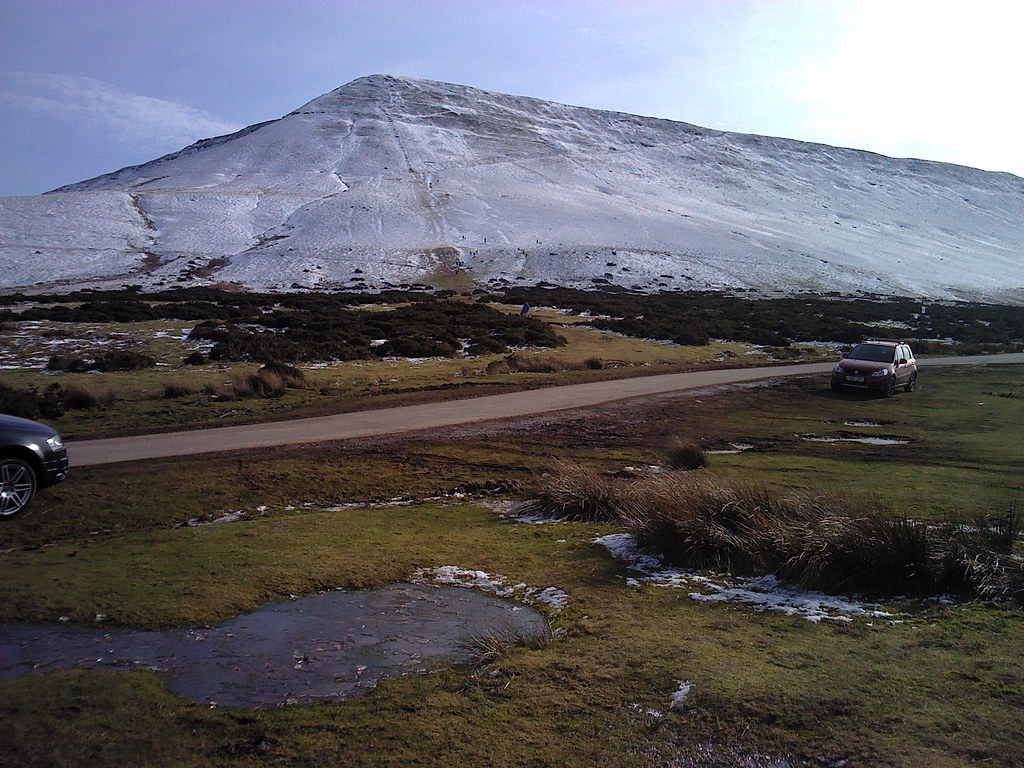 I took the short route up, starting off towards the visible peak (not the actual summit, and not in the activation zone), and then following the path to the right, up towards the summit ridge. This had been well trodden in the preceding days, and the snow was compacted and very slippery in places 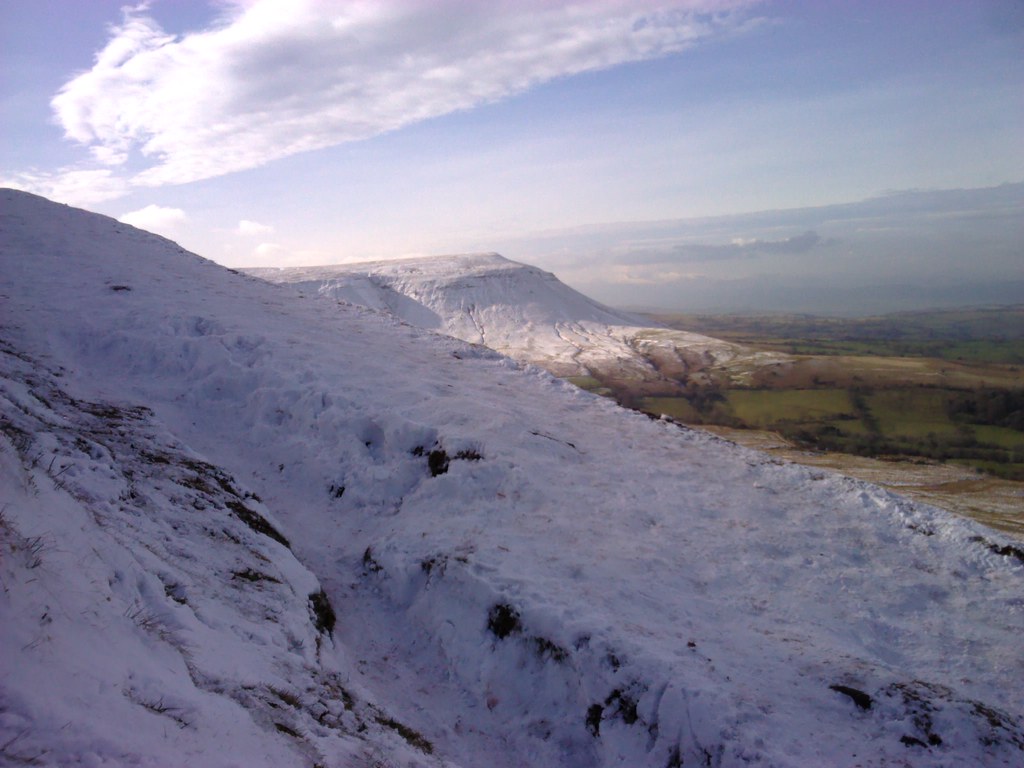 I followed the gentle climb along the ridge for a mile or so, well into the activation zone. By now I was in bright sunlight, and chose a comfy peat hag to sit on, with a frozen pond beneath my feet 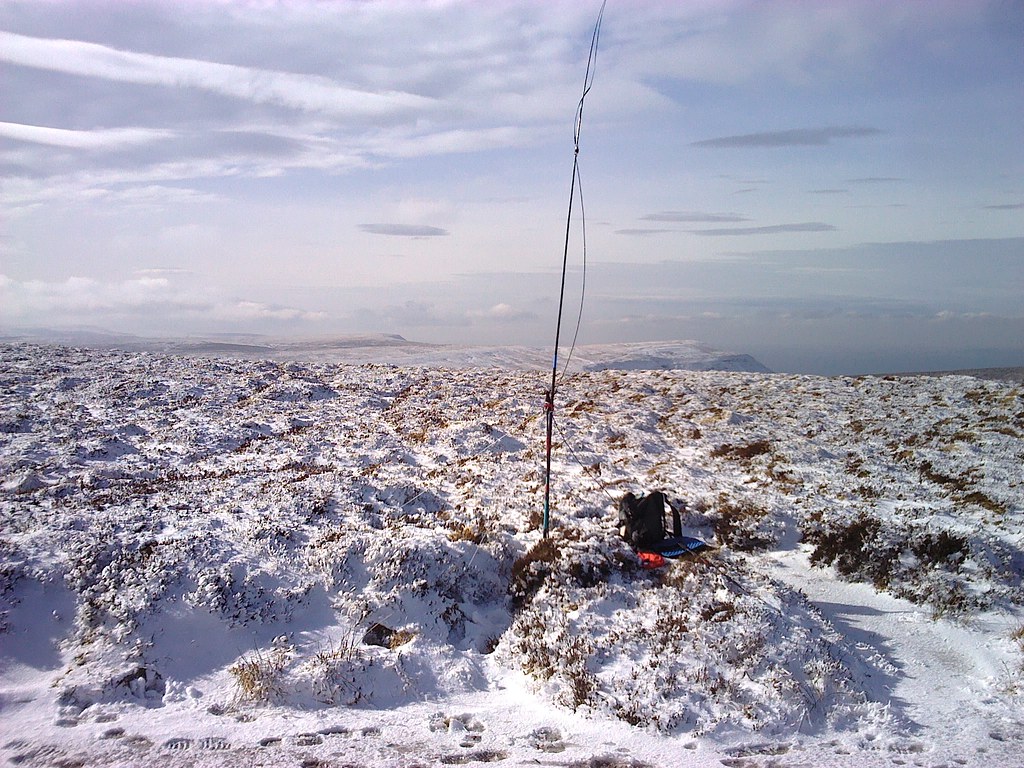 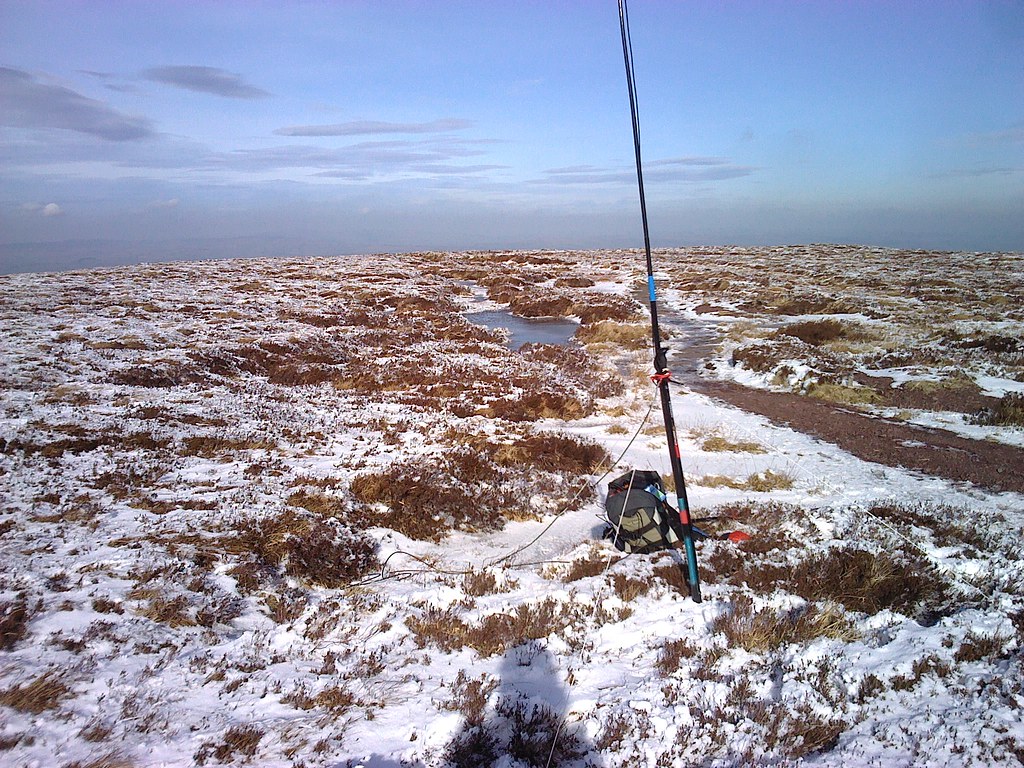 It was about half an hour past my alerted time, but G4ERP replied to my first CQ on 145.500, and put up a spot - thank you Richard. A quick stream of contacts followed, including an S2S with Allan GW4VPX/P on Beacon Hill. Thanks to all callers.
Back to the car, only slipping over a few times on the way down the slippery path I mentioned earlier

Happily no harm done, and I was soon on the 30 minute drive over to the next pair of summits, the parking spot being on the coll between the two.

Mynydd Troed is quite a steep climb if the direct route is taken, which it was today. I paused about half way up to snap this pony, who was, unusually, making her way towards me perhaps in the hope of a spare apple. I didn’t have one, but it did allow me to catch my breath! 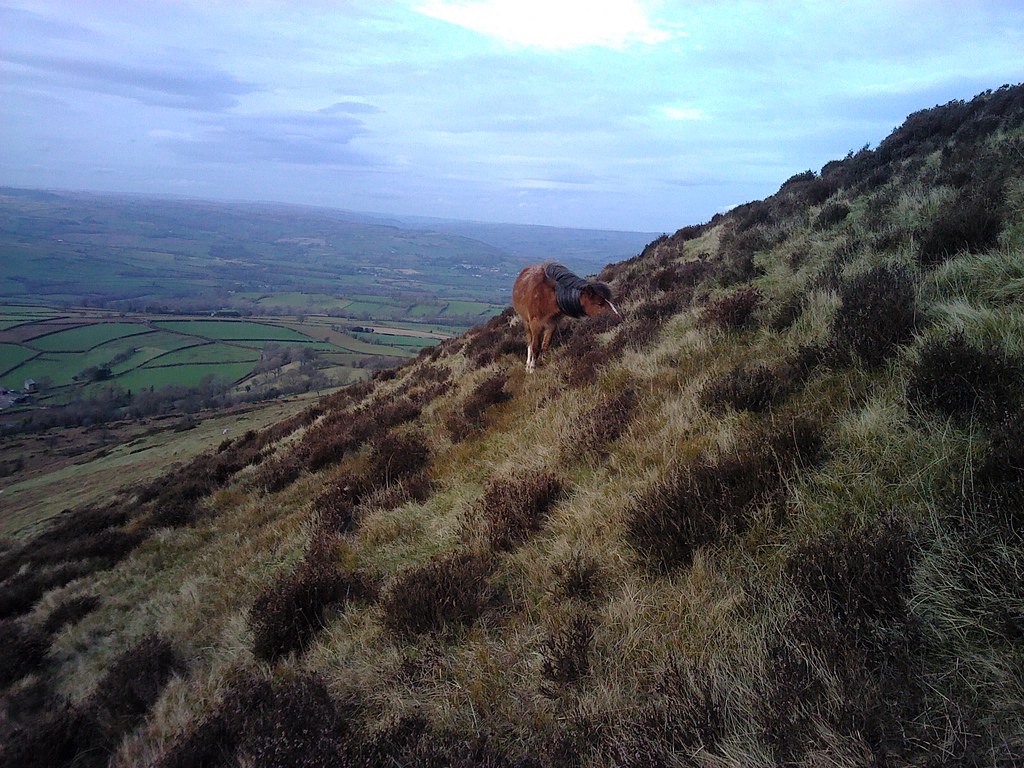 There are plenty of dips on this summit to provide shelter from the wind, but today I set up close to the northern edge, which was out of the wind, and would, I hoped, optimise my VHF takeoff. 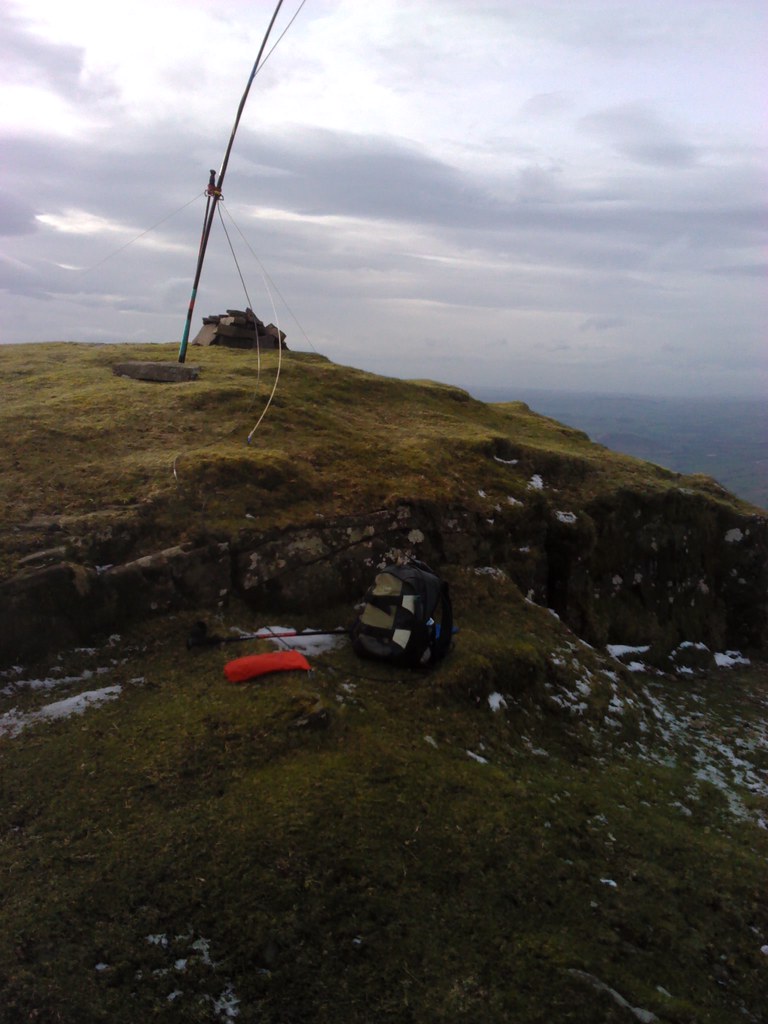 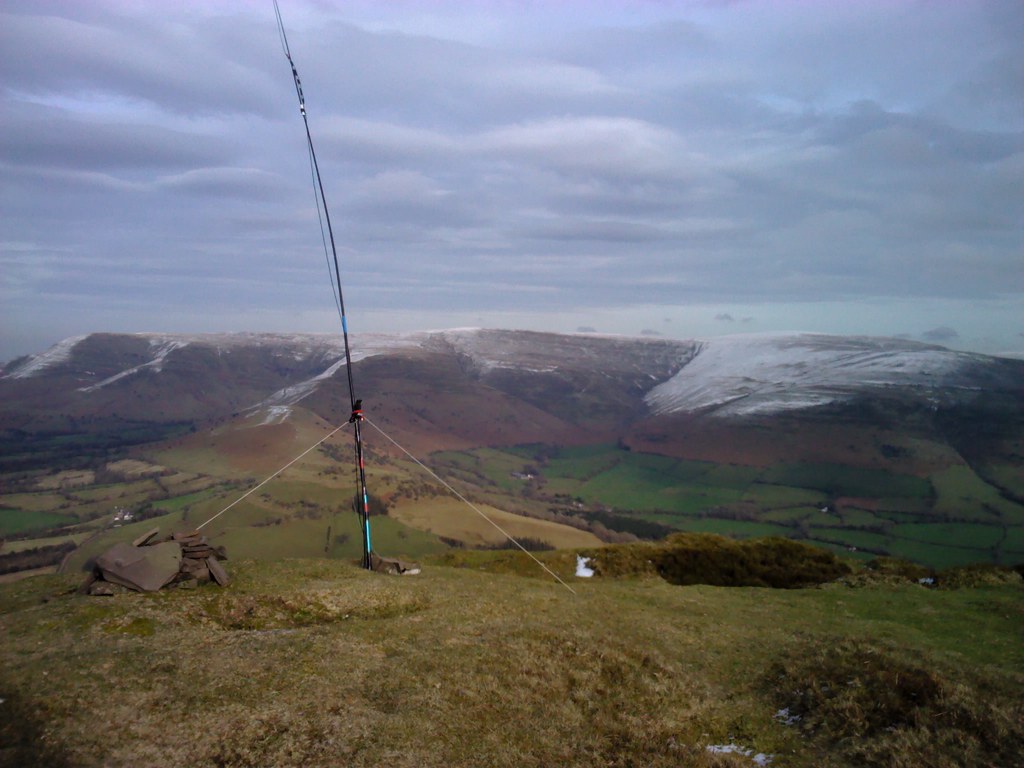 Again my 145.500 CQ was answered immediately, this time by Alistair M0TYM/M pedestrian, who was just walking off Long Mynd. In the same party, QSOs followed with David M0YDH/Mp, Anne Marie M6HMA/Mp and M6EMP/Mp (name not in log, sorry). Thanks all for helping me to qualify the summit quickly. Two more QSOs followed a few minutes later, and then silence. I considered putting up a spot, but the next summit was calling, and time was moving on. I packed up and headed down.

I passed the car, pausing for a quick gulp of water, and pressed on up Mynydd Llangorse. Much the easyest of the three, this is a fairly gentle climb up a grassy slope, and then a walk along the ridge. I set up by the path, next to a small cairn. Mynydd Troed in the background. 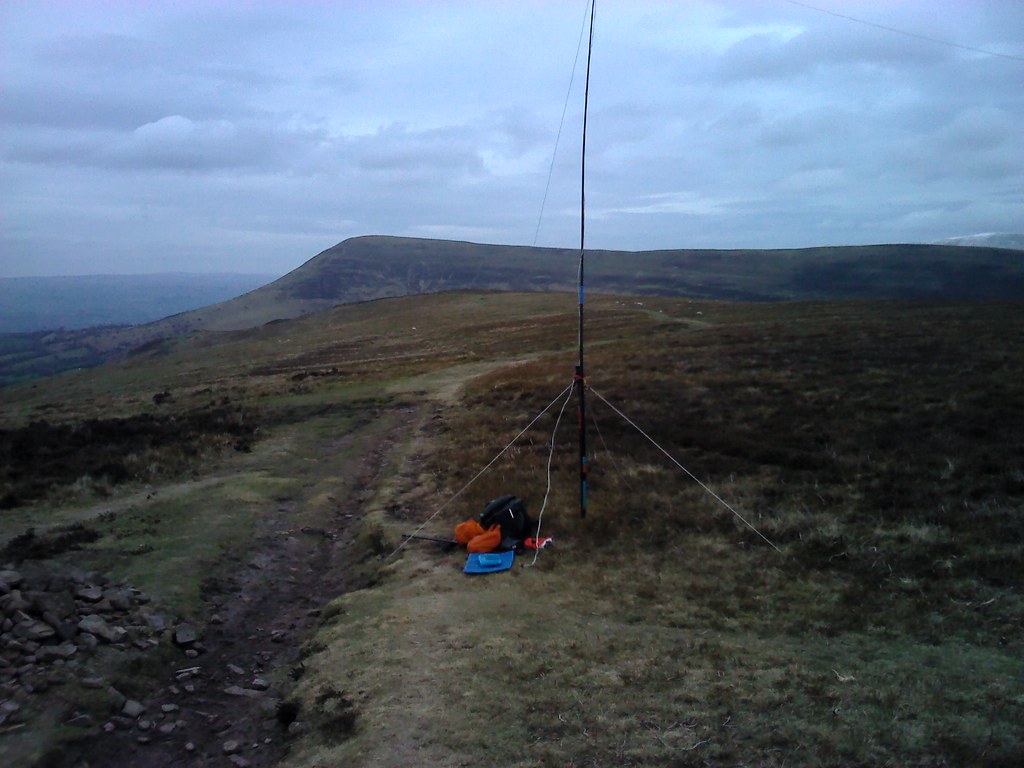 By now it was after 4:00pm, and I thought the probability of qualifying this summit on 2m FM with 5 watts in a reasonable time, was not high.
So I set up a dipole, put up a spot, and called CQ on 30m CW. Twenty two contacts quickly followed, drying up after about fifteen minutes. Many thanks to all callers.
By now it had started snowing - the small round sort, just a little softer than hail, but still face stinging when driven by the wind. Is there a specific name for this kind of precipitation?
I packed up and headed back along the ridge. The snow intensified, and then turned to rain as I walked down towards the car. I was well wrapped up, though, and it did nothing to spoil the day.

My car seems to have brought back a rather unnecessary quantity of characteristic Brecon Beacons red mud, and deposited it on my drive. I put this down to the cross country drive between summits

Altogether a very enjoyable winter bonus day.
Thanks again to everyone who called me, and apologies to any who missed me, but time was limited.

Thanks for the report, pics and for the s2s. Looks like you enjoyed yourself despite the cold and snow flurries. Take care.

y now it had started snowing - the small round sort, just a little softer than hail, but still face stinging when driven by the wind. Is there a specific name for this kind of precipitation?

Could have been Graupel. https://en.wikipedia.org/wiki/Graupel

It’s nasty stuff as it can form a VERY unstable layer in a snow pack with weak bonds between layers and in effect, create a “ball bearing” sliding layer for the upper layers to get moving on. Finding a graupel layer in a snow pit examination usually means one thing - go somewhere else.

Great report by the way

Sure is for equipment too. That’s what got into my backpack and did for my 817 some years ago. It has the tendency to bounce off surfaces and when packing away during a shower it can be difficult to keep it out of the pack. That’s why I now keep my rig inside a plastic enclosure in the back pack and I carry a towel as well. A warm 817 soon turns it to water.

Thanks for the excellent report and photos Adrian. It’s a long time since I activated those summits - maybe it’s time to give another airing to my second callsign and experience them again.