Logistics: South Manitou island is part of the Sleeping Bear Dunes National Park, and is accessible via a 90 minute ferry ride from Leland. There was a fresh south wind on both our outbound and return trip with waves in the 4’ range. If you’re prone to motion sickness, definitely take your Dramamine. The boat docks at the large harbor on the southeast side of the island, you’re given a quick orientation and turned loose. Expect lots of Lost jokes. We arrived with about 30 other people, the vast majority of whom head for the nearest camping area which is about .5mi away. We opted to camp on the north side of the island. If you’re interested in solitude, this is the way to go, and it’s only a 3.5mi walk. It was my intention to set up camp and then hike the outside perimeter of the island back to the south side and then up to the summit.

As it turns out, two factors foiled the plan. First, the island has lost significant beach in recent years and it is currently not possible to walk around the west side without significant stretches of wading. Second, the mosquitos were out in such massive force that the idea of a ~15mi r/t hike through dense woods sounded like a very bad idea. We decided the best plan would be to hike up to the summit the next day when we returned to the south end of the island to catch the ferry back. Unfortunately, there was neither cell service nor APRS coverage to allow updating or canceling my alert. My apologies if you were listening for me!

Camping on the north end of the island was great, despite the seriously aggressive insect population. We spent the evening hanging out on our own stretch of beach with a beautiful view of Northern Manitou island a few miles across the channel.

Ascent: The high point is on the southwest side of the island. Access is via a nicely signed trail system. All elevation is gained in one fell swoop over the last mile or so. A few steep, sandy switchbacks and you pop out of the trees.

Summit: Like most others in this area, the western side of the island is arid sand dunes. The high point is the tallest of the stepped dunes, and the trail leads directly up to it. The view is magnificent. It was fair when we arrived and you could easily see the entire perimeter of the island, the northern island, and the mainland.

RF: I used my ATS-4 radio and a 20/30/40m trapped EFHW wire antenna. There is nothing to hang a wire from or lash a mast to on this summit, so I settled for pushing my fishing pole 18” into the sand. I was powering the radio with a 9v battery which makes ~2 watts.

I am still not sure exactly what the problem was, but I started with 40m and got no responses to my calls for 10 minutes or so. I changed the orientation of the antenna, and tried again with no luck. Finally I switched to 30m and worked N2ESE after a few moments. A couple of other stations tried but were clearly not hearing me very well. My first call on 20m yielded a sizable pileup, though, and I ended up working 11 people in short order.

I am not sure if the problem on 40 and 30 was bad conditions, something amiss with my setup, the minimal power I was running, or just a lack of people listening in the areas I was getting to on those bands.

Summary: This was a fun summit that I highly recommend. You can do it as a daytrip if you’re quick, but if you’re going through the effort to get out there you might as well stay a night or two. The island has a stand of ancient cedars (easily the largest I’ve ever seen) and the remnants of a settlement to explore. The biodiversity is remarkable, and it really does feel like a nearly untouched bit of the world. Unless you’re chartering out during the shoulder seasons, bring long clothes, headnets, and an ample supply of heavy duty bug dope.

I shot video but there was a steady 10-20mph wind nearly the whole time we were there. This was welcome, but it did make most of the audio nearly unusable. If I can make something of it in the end, I’ll add it to this post.

Many thanks to all you chasers!

The lighthouse just south of the dock is argued to be the most beautiful on the Lakes, and I wouldn’t disagree. 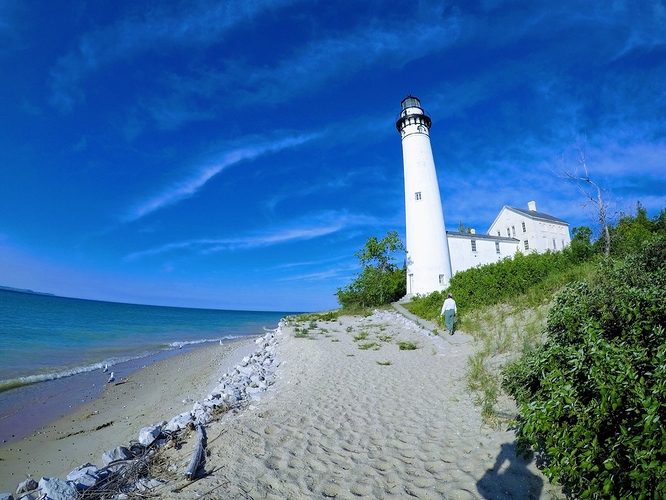 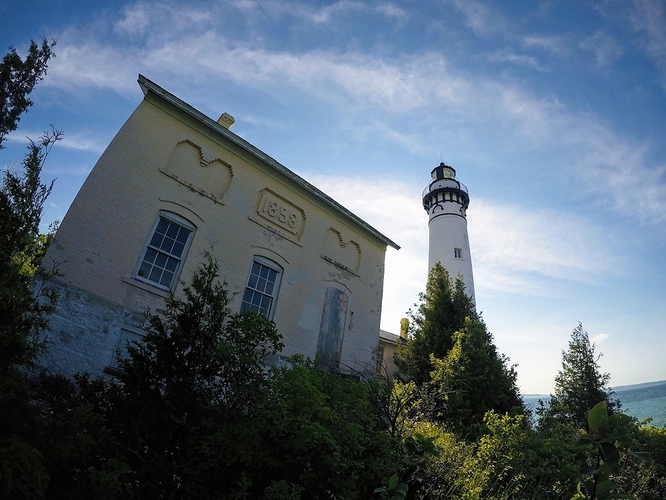 Wildflowers were out in full force 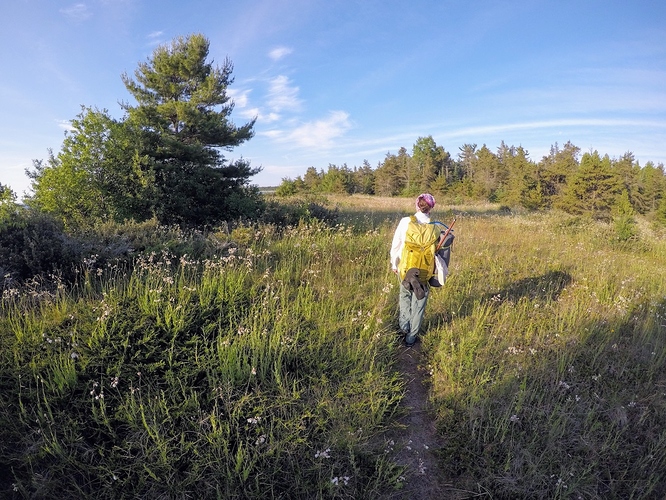 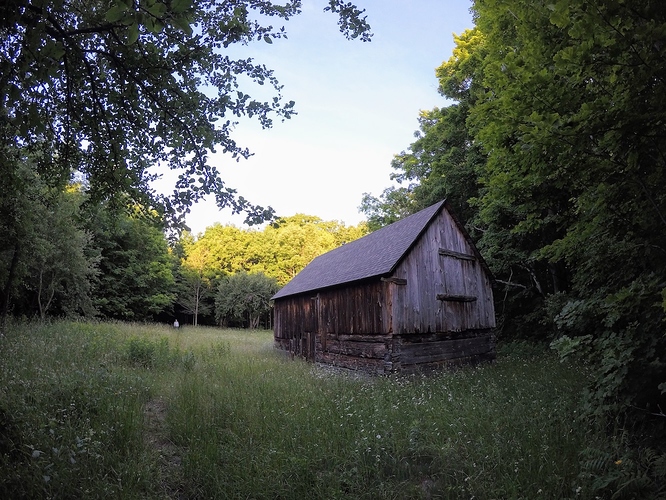 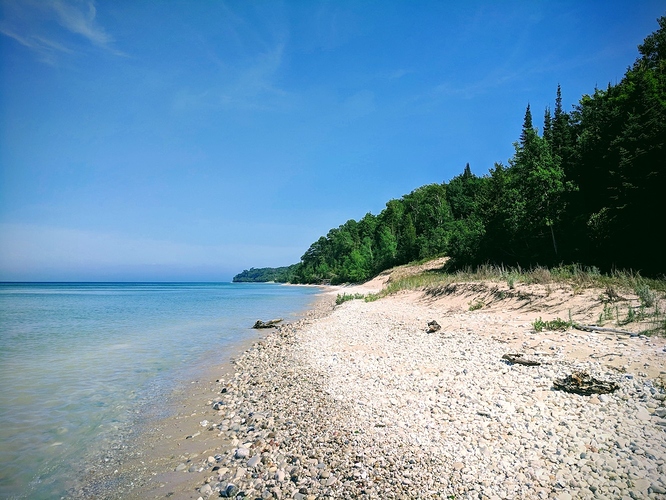 A group of curious hikers offered to shoot a pic of us on the summit. They wanted to know if we sent photos over HF from the summit. When I said it was cw only for me they clearly thought I was doing it wrong. 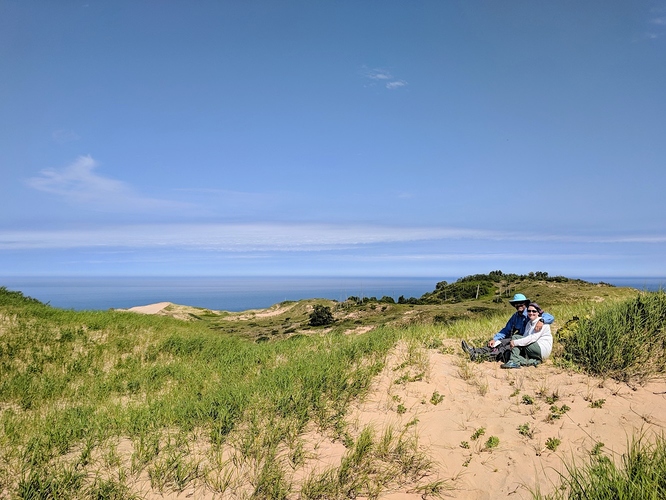 I think I was wondering why my logbook was still empty despite having called cq for 15 minutes. 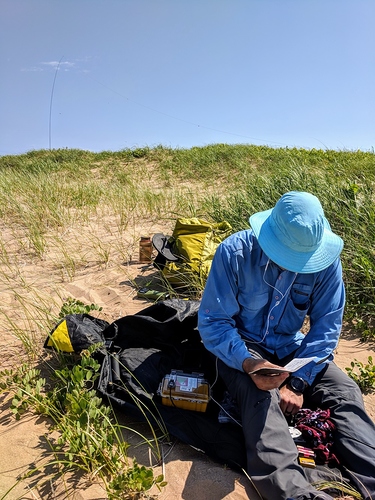 Allison soaking in the view one last time before we headed down. 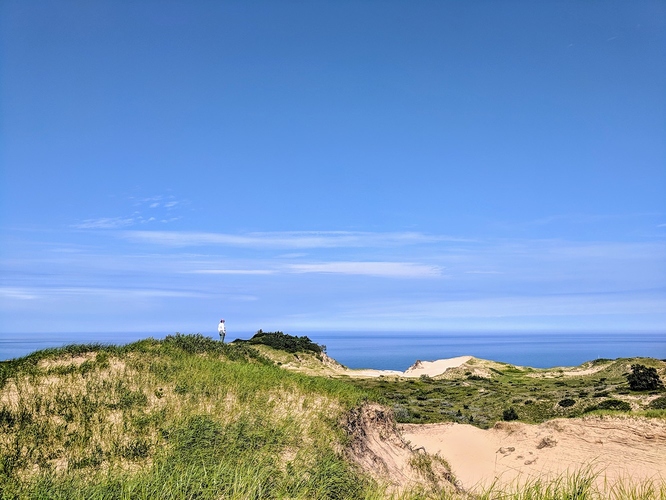 Great report! I’m amazed at the terrain, and the means of getting there.

I live next to Windermere, the longest lake in the UK at 11 miles long - not on the same scale as Lake Michigan however!

Thanks for the report and photos! Mark. M0NOM